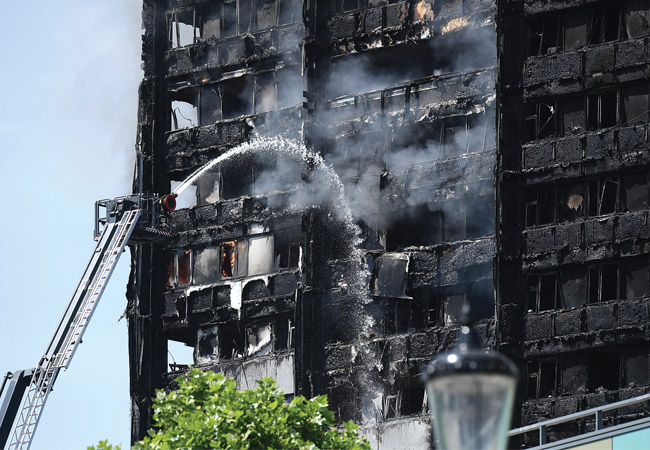 Leading safety bodies have called for the government to reverse the ongoing deregulation of health and safety in the wake of the Grenfell Tower tragedy.

The Institution of Occupational Safety and Health, the British Safety Council and the Royal Society for the Prevention of Accidents have urged ministers to ‘think again’. In an open letter to the Prime Minister, signed by more than 1,000 safety specialists, they described the fire as ‘a turning point’ that would prompt ‘wider appreciation that good health and safety is an investment, not a cost’.

The letter led to a debate in the House of Lords, culminating in Lord Prior – from the Department for Business, Energy and Industrial Strategy – agreeing to convene a meeting between the safety industry and government. ‘The awful tragedy of Grenfell Tower will make us rethink these issues and I hope it will change… the way we look at regulation,’ he said.

Meanwhile, a report on the BBC’s Newsnight programme suggested the Department for Communities and Local Government is planning a full review of the Building Regulations in the wake of the fire. It is understood officials will look at how building components achieve compliance with the regulations, possible ambiguity in supporting guidance, and whether testing regimes are sufficiently rigorous and consistent.

The Local Government Association had demanded just such a review, saying scrutiny of the regulations could not wait until after the public enquiry into the Grenfell fire. ‘There is a complexity and confusion in the current system that must be addressed,’ it said.

Mechanical smoke extraction and ventilation systems – such as that installed as part of the 2016 refurbishment at Grenfell Tower – are not designed to clear smoke in a whole-building
fire situation.

Mechanically ventilated smoke shafts are prevalent in the market because they save space and guarantee smoke-extraction rate. However, these systems are normally designed to a maximum 4MW design fire from a single flat, with sprinkler-protected systems operating on a lower design-fire size of, typically, 1MW – both of which are much lower than the assumed whole-building fire load experienced at Grenfell Tower.

According to an industry expert, designing for a whole-building fire requires significant spacial, power and capital costs for many aspects of the building. Among these are smoke ventilation, resilience of construction – including compartmentalisation – and water provision if sprinklers are installed.