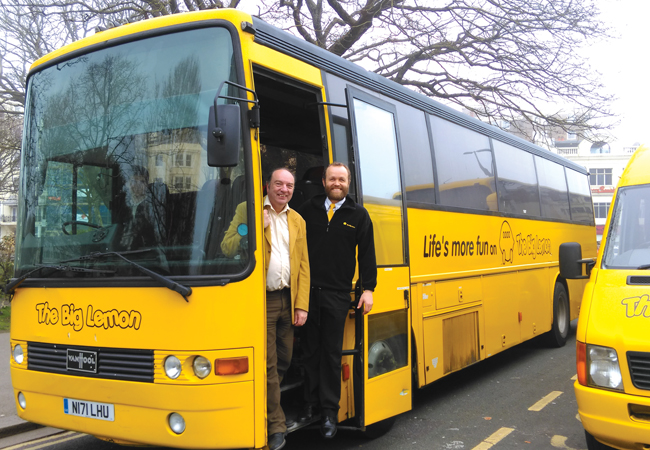 Eco-friendly bus operator Big Lemon has converted two 25-seater buses to run on electricity derived from solar power. More than 120 photovoltaic panels have been installed on its depot in Brighton, where the buses will be charged at night.

In summer, excess electricity will be pumped into the grid, while the buses will draw some electricity from the grid in winter. But it is expected that the panels will generate more electricity than the buses need.

Former transport minister Norman Baker, managing director at the Big Lemon, said: ‘You spend half your life at work, so you’d better do something you believe in and I believe in the Big Lemon.’

At the Department for Transport, he oversaw the Green Bus Fund and increased electrification of the railways.

According to the Office for National Statistics (ONS), the industry achieved a turnover of £43bn in 2015 and employed 234,000 people. Solar power also hit a new high of 8GW output on 9 April, while the UK has just experienced its first full working day without coal-generated power since the Industrial Revolution.

However, the Solar Trade Association (STA) said the number of UK installations has fallen by 81% compared with last year, because of the cut in the government’s Feed-in-Tariff (FiT) subsidies. Many businesses are also facing rate rises of up to 800%, which will reduce their ability to invest in new systems.

STA chief executive Paul Barwell said solar was being ‘needlessly impeded by shock taxes, red tape and by a serious failure in the only remaining supportive policy’.

He said this risked the UK industry being left behind ‘while other major economies strengthen their stake in a booming world market’, and he called for legislation to stop ‘the extreme and anti-competitive business-rate hike for rooftop solar’.