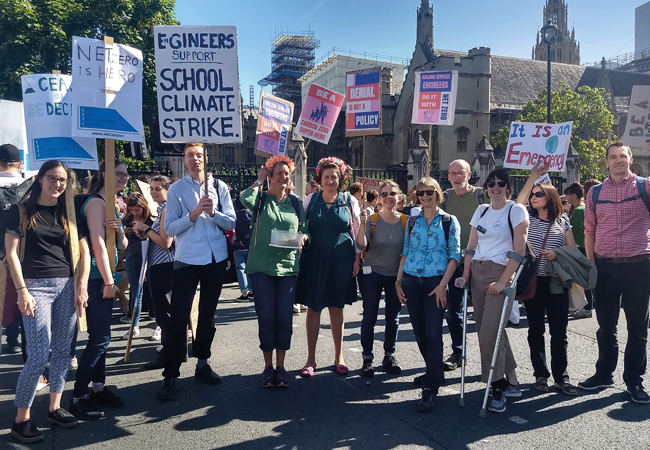 The practices allowed employees to join the day of action, in which millions of people participated around the world.

Many from the building services industry met at The Building Centre in central London to join the UK Green Buildings Council (UKGBC) on a march to Westminster while, elsewhere in the UK, engineers and consultants from leading firms joined the protests, including Waterman, which joined the protest in Birmingham.

Fergus Anderson, senior sustainability consultant at BuroHappold, said: ‘We are joining the climate action in support of the movement’s aims, and we too have made our own – and industry-wide – commitments. These declarations acknowledge the twin crises of climate breakdown and biodiversity loss as the most serious issues of our time.

‘By taking action we wish to show solidarity with those supporting the action, as well as continuing with our own efforts to make meaningful and purposeful progress in this area.’

Members of Leti were also out in force in London, including CIBSE’s current Engineer of the Year Clara Bagenal George, who works for Elementa Consulting.

View from a climate strike march

It was a good day. It was great to see the UKGBC taking the lead and encouraging protest and solidarity among the design community. The atmosphere was upbeat and the banners amusing; ‘Hard hats for ice-caps!’ was a favourite. The serious message of the day was not lost on anyone. I was glad to see how many people (especially children) turned out, and the global nature of the protest was heartening.

Many M&E firms responded to the strike and encouraged staff to participate – Max Fordham opened its offices for free consultations, and a group from BuroHappold Engineering turned up with a massive recycled banner. There were some big names that didn’t appear to be represented; I was sorry to hear of colleagues working for companies that have signed Building Services Engineers Declare who were told they could only attend the strike if they made the time up that week – not a possibility for people with caring commitments.

I’m interested in what measures there might be to hold organisations to the powerful declaration they’ve signed, including: ‘Raise awareness of the climate and biodiversity emergencies and the urgent need for action amongst our clients, collaborators and supply chains.’ and ‘ Include life cycle costing, whole life carbon modelling and post occupancy evaluation as part of the basic scope of work, to reduce both embodied and operational resource use.’

I waved my ‘Building services engineers do it with net zero’ banner with pride on Friday. We can do this.