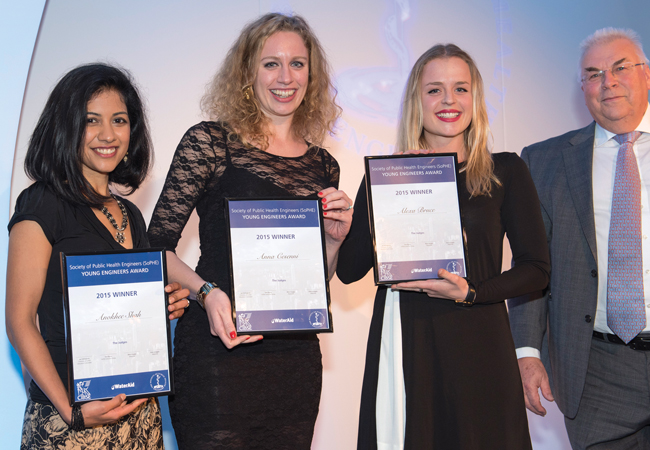 A team of young engineers from Arup have won the Society of Public Health Engineers’ (SoPHE)Young Engineers Award 2015.

The proposal by Alexa Bruce, Anna Cesenni and Anokhee Shah was created in answer to the challenge set by the judges to assess how local Moringa or cactus plants could be used for household-water treatment in poor communities of Liberia or Sierra Leone.

Their presentation focused on the potential of the Moringa plant to act as a natural aid in existing water-filtration methods such as the biosand filter.

The winning idea involved the commercial growth of Moringa plants in conjunction with the establishment of water-treatment facilities, powered by bicycle and requiring little to no electricity to run. Each of these facilities could supply the water needs of 150 people per day, as well as jobs for local people.

As a by-product, plants produce goods such as fertiliser, seed cake for livestock, and oils used in cosmetics, which would allow the treatment facilities to be run at a profit.

A second benefit of the plan relates to its ability to empower women, who would gain from this system as they are responsible for water collection in more than three-quarters of west African households.

The winning team will carry out a field trip with Water Aid to the affected area.

The event, hosted by the SoPHE Industry Group, attracted more than 300 engineers.Vaughan called upon members to support the newly formed Public Health Engineers sub-group of the CIBSE Young Engineers Network.