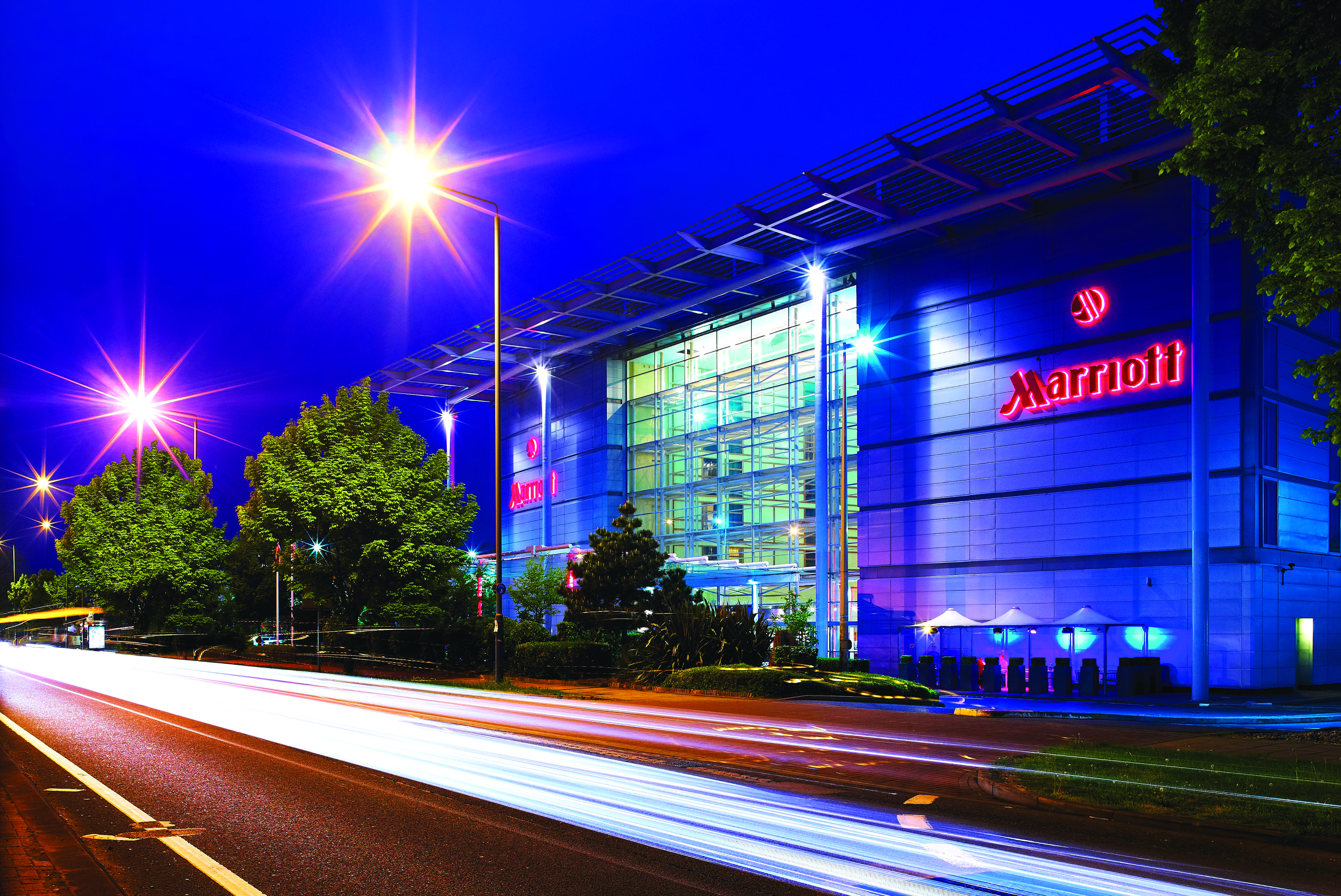 ESOS requires large organisations to have a detailed audit of their buildings, industrial processes and transport, to find out how they can make energy savings. These audits must be carried out by approved assessors (see panel ‘ESOS nuts and bolts’).

CIBSE’s register of Lead Assessors has passed the 150 mark, and Professor Andrew Geens, head of CIBSE Certification, expects to see 300 names on the list by April.

‘It has grown quite quickly, which addresses one of the concerns of the Department of Energy and Climate Change – that not enough people would get onto the registers to meet the obligations under the regulations,’ says Geens.

The nuts and bolts of ESOS

ESOS is a mandatory energy-assessment scheme for UK companies with 250 employees, or a turnover of more than €50m, or an annual balance sheet total of €43m.

The scheme was established by the government to implement Article 8 (4-6) of the EU Energy Efficiency Directive, which applies to businesses and not-for-profit organisations.

Eligible organisations must carry out audits of the energy used by their buildings, industrial processes and transportation.

They must make sure that at least 90% of total energy consumption is subject to either an ESOS-compliant energy audit, a DEC, a Green Deal Assessment, a certified ISO150001 energy-management system, or a mix of all four.

Businesses must notify the Environment Agency that they have undertaken an ESOS assessment by 5 December 2015, and then do one every four years.

This is just as well, because there is less than a year to go until eligible organisations must demonstrate compliance with ESOS regulations by having an ESOS report.

Sebastian Gray, director at GEA Consulting, was one of the first CIBSE Lead Assessors. He has yet to carry out an ESOS assessment, but – as a Low Carbon Energy Assessor – has undertaken assessments for Display Energy Certificates (DECs).

The inspection process is similar; however, the compliance route for an organisation will depend on how many sites it has – the fewer buildings, the more suitable it will be for a DEC assessment – for the building element of their ESOS reporting.

CIBSE Journal recently joined Gray on a DEC assessment at a Marriott Hotel at Heathrow, where he identified energy-saving opportunities that may be found under ESOS.

Geens says it is up to Lead Assessors, such as Gray, to sell ESOS recommendations as ‘irresistible opportunities’ for the company director, who – under the requirements of the regulations – has to sign off the report. ‘ESOS is mandatory, but whether companies act on the report will be down to the skill of the Lead Assessors in making a good enough case – not just in identifying opportunities, but also in signposting how it can actually be achieved and funded,’ he adds.

Gray agrees. ‘Everyone continues showing everything in carbon, but a director looking at the bottom line wants to know how much it’s going to cost, and the return on his investment,’ he says. 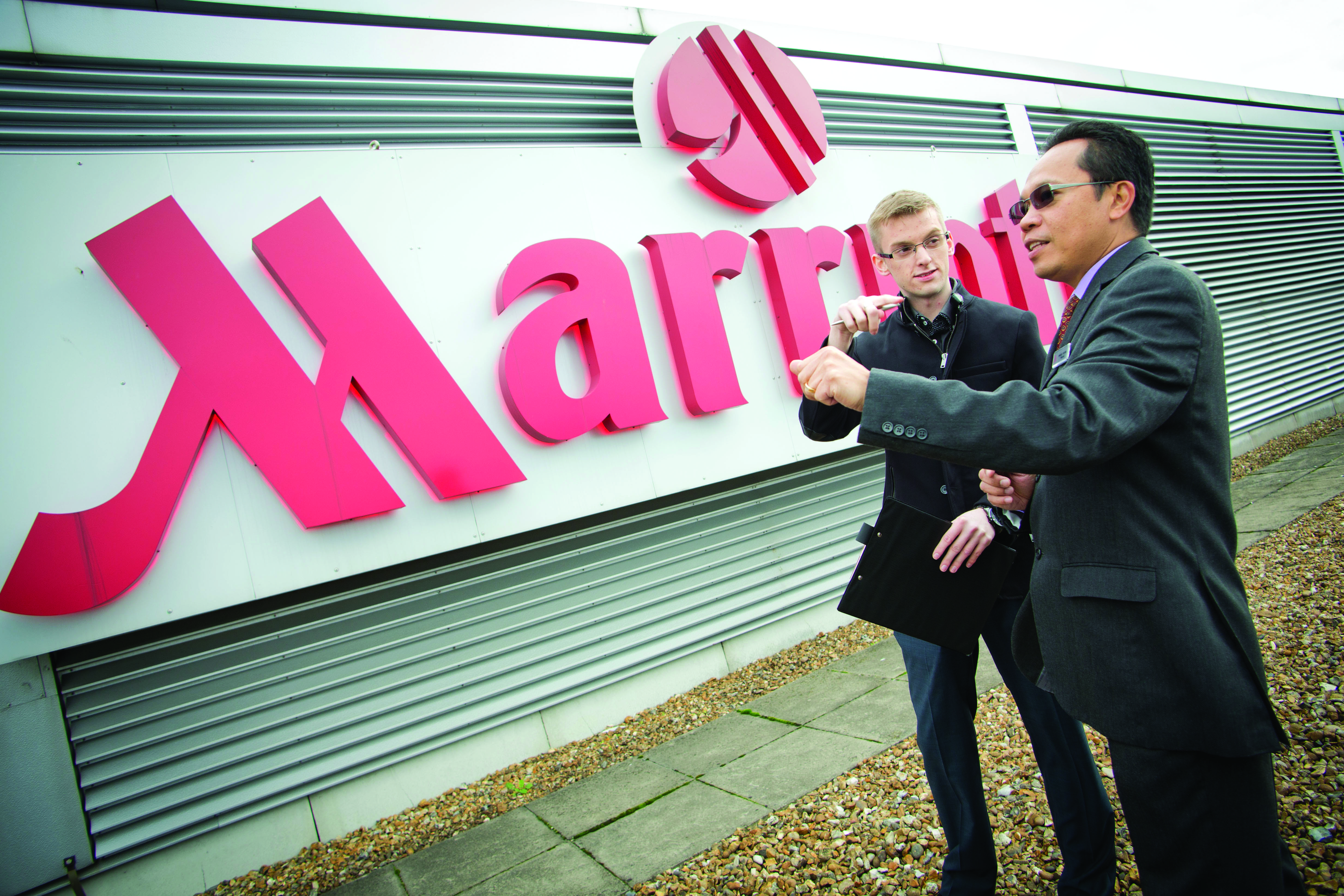 The heat is on

‘Before I step into a plantroom, I brace myself,’ says Gray. The first telltale sign of an inefficient plantroom is the heat that often hits you from poorly insulated, exposed piping, and Gray estimates that, every year, £100 is wasted for every 10 metres of bare pipe. Hot valves can also set off alarm bells, he adds, but this can easily be solved with valve bags or end caps.

Gray checks the condition of the boilers and hot-water systems at the London Heathrow Marriott, looking for signs of poor upkeep, rusting or leaking.

Important pieces of kit to upgrade are variable speed drives on water pumps, he says. These are easy to install and – with a payback period of three to six months – are a quick win, instantly saving both energy and money. 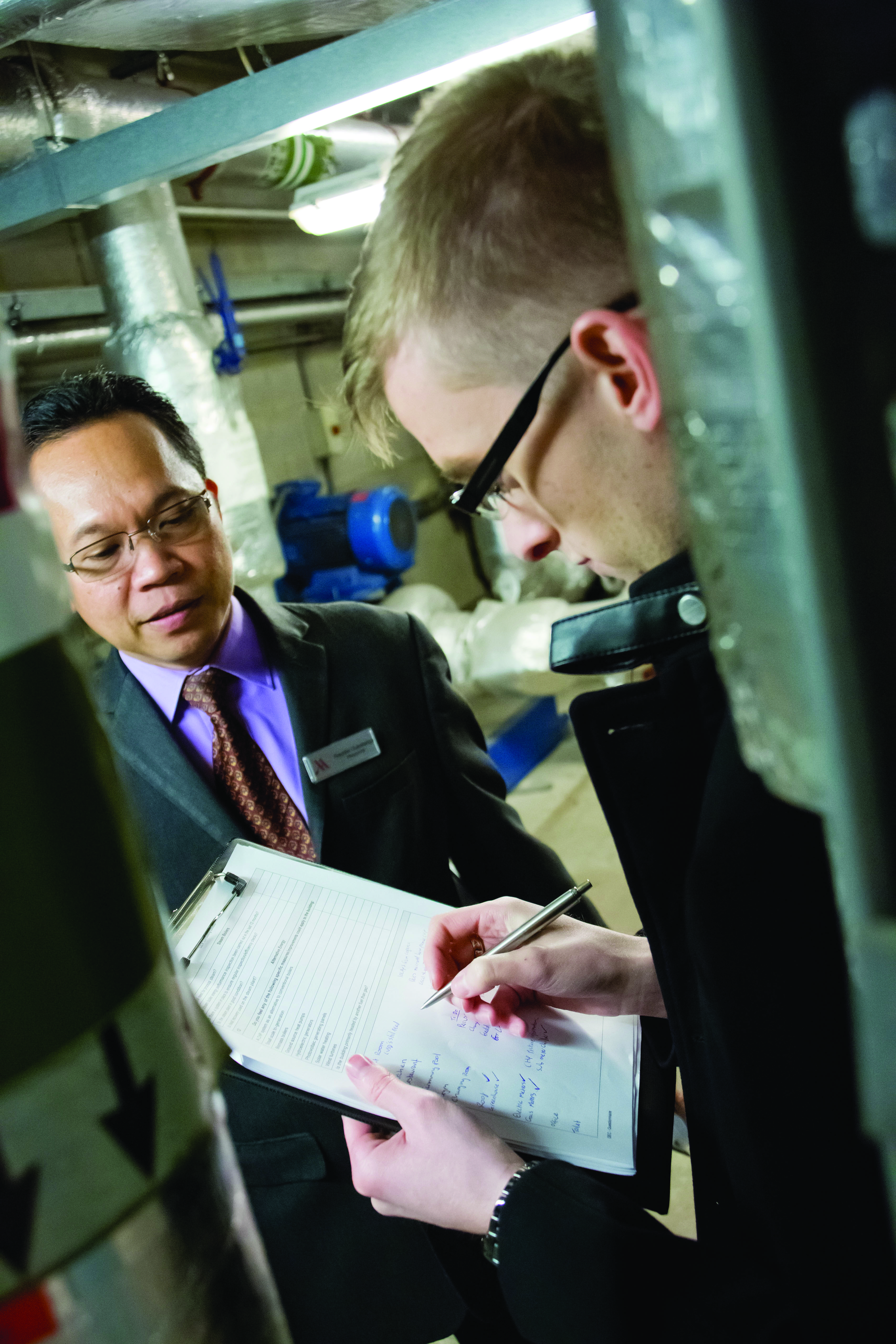 Gray estimates that, every year, £100 is wasted for every 10 metres of bare pipe

When it comes to energy consumption, the biggest shock for most people is seeing the figures for kitchens, says Gray. The worst-performing ones are often found in schools, restaurants and hotels.

‘I always ask the chef if they have a deep-fat fryer, and what time they turn it on. Almost always, the answer is: “When the chef comes in, at five or six in the morning”,’ says Gray. ‘It takes 50 minutes to heat up a deep fat fryer, so if they’re not serving until lunchtime, that’s a huge waste.’

Gray’s eye for detail is apparent when he spots a gas hob on, but not being used, in one of the Marriott’s kitchens. ‘I can stand here all day to see how long it takes before the hob is used. All I can see now is money going down the drain.’

Staff engagement is a useful tool for dealing with situations like this, says Gray. He advises devising a kitchen energy plan, to identify frequently used equipment, and putting up a building energy cost indicator (BECI) chart, which shows how much can be saved by switching off appliances.

Another thing to be considered is the fitting of sub-meters to monitor energy consumption and tackle wasted energy more effectively.

‘A lot of the things we recommend are quite cheap and easy to implement, but they are impactful,’ says Gray. ‘Knowing that the water tap costs £6.50 an hour
to run makes staff more inclined to turn
it off.’

After inspecting downlights – which are soon to be replaced with LEDs – Freddie Gubatanga, engineering manager at the London Heathrow Marriott, abseils down the hotel’s lobby wall to join Gray for a DEC audit.
A hands-on man, Gubatanga is always looking for ways of cutting carbon at the building, and has already overseen the installation of LEDs throughout the seven floors of the 22,000ft2 hotel.
However, he says it is often the little things that make a big difference; for example, using old kitchen cooking oil to fuel incinerators saves the hotel £4,000 a year, while an on-site 600W wind turbine powers the LEDs in a rooftop Marriott logo, which is estimated to save 12 tonnes of carbon dioxide emissions per year.
The rooftop greenhouse – which provides the hotel’s three kitchens with fresh herbs and vegetables, all year round – is heated by the same hybrid wind turbine/solar PV system, and more PVs are used to power the parking meters. The hotel also has two electric-car charging points.
Gubatanga says sustainability has become a great way of bringing staff together and engaging with the local community. The hotel’s green committee – which includes everyone from the general manager to human resources – helps to uphold Marriott’s ‘green culture’. The involvement of managers means the message filters down through the organisation.
Creating a greener, more sustainable environment is part of Gubatanga’s daily, weekly and monthly routine, but the true driver is seeing financial savings. ‘You need to challenge the director of finance and show how much can be saved on the energy bill,’ he says. So it’s important to present the results from a financial perspective, making sure all requested investments can be backed up.
Marriott’s director of engineering, Jim Shields, says: ‘In terms of kilowatt hours, the CHP uses more gas than it provides in electricity created. But if you convert its return on investment with the heat recovery you get, it would pay for itself in three years. That’s a payback of £123,000 per year.’
Shields builds occupancy information into the budget to show how savings are achieved, based on energy use at different times of the year.

Bathroom lights at the Marriott are fitted with movement sensors, but Gray suggests more savings could be achieved by the hotel fitting percussion or infrared taps, to reduce water use. He also advises replacing paper towels with efficient hand dryers.

At the hotel’s swimming pool, the biggest issue to look out for is thermal stratification. This natural process can result in dramatic differences in temperature from floor to ceiling, and from wall to wall. 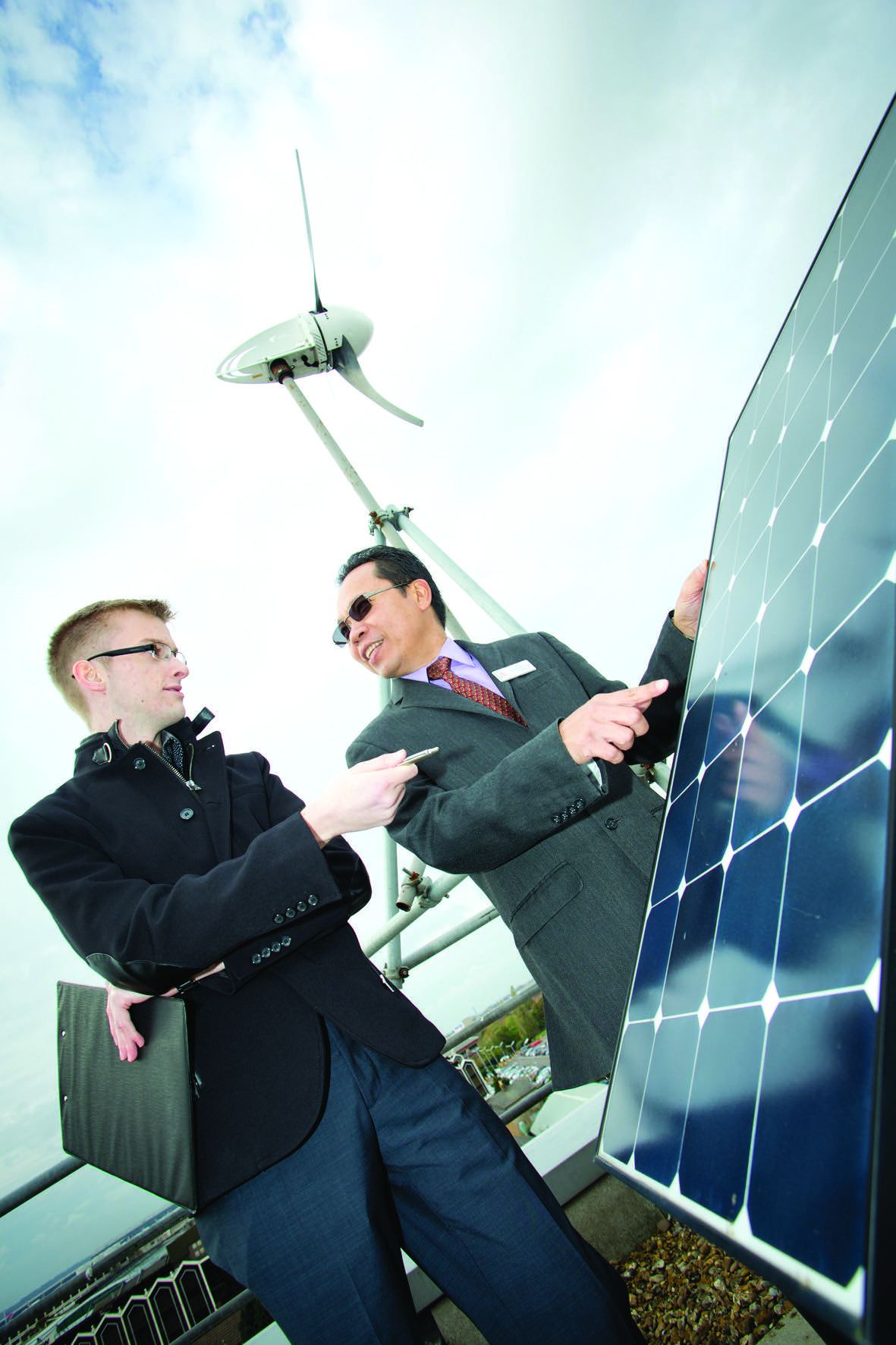 As he walks through the building, Gray – from time to time – slides his clipboard into gaps between doors. ‘If you can see through the crack between the doors, then air can pass through it,’ he says.

Door seals, especially in heavily air-conditioned areas – such as a gym or swimming pool – could make a huge difference to the effectiveness of a building’s HVAC system.

Gray says energy and cost savings can be found in the simplest things, such as turning off unused computer monitors, or switching a vending machine’s lights to LEDs.

‘We had fluorescent tubes plugged in, which were heating the things we were paying to keep cool. It’s just common sense,’ adds London Heathrow Marriott engineering manager, Freddie Gubatanga.

On a larger scale, Gray recommends that the hotel puts reflective coating on its front-entrance windows, to prevent solar gain, and continue with plans to install solar panels and mini wind turbines on the roof.

Gray says ESOS is a more advanced version of DEC because it provides a more in-depth energy assessment, with recommendations. He adds: ‘People think audits are quite scary – but I’m not here to scare you; I’m here to show you where you can save money.’

Lead Assessors are already reporting a high level of activity around the Energy Savings Opportunity Scheme (ESOS), according to Professor Andrew Geens, with many companies getting in contact to scope out what they need to do, and the costs involved.

Head of CIBSE Certification Geens says the institution is well on the way to having the biggest register of Lead Assessors.

The list of qualified and approved people has passed the 150 mark, and a further 100 have already undertaken CIBSE’s ESOS Lead Assessor training. By April, Geens expects there to be 300 on the register.

Between CIBSE and the Energy Institute – plus the other professional bodies that are supporting ESOS – Geens expects that the number of Lead Assessors needed for UK companies to meet their regulatory obligations will be achieved.

‘I am very pleased by the response so far,’ he says. ‘It has been encouraging people – who have been waiting to see how the scheme develops – to look at those already committed and get involved.’

Gray believes the scheme has ‘plugged the gap in the private sector’ by allowing assessors to tell private companies to sort out their energy. ESOS is clearly gathering pace in the UK.

To find a CIBSE ESOS Lead Assessor, or if you are interested in becoming one, visit www.cibseenergycentre.co.uk/esos