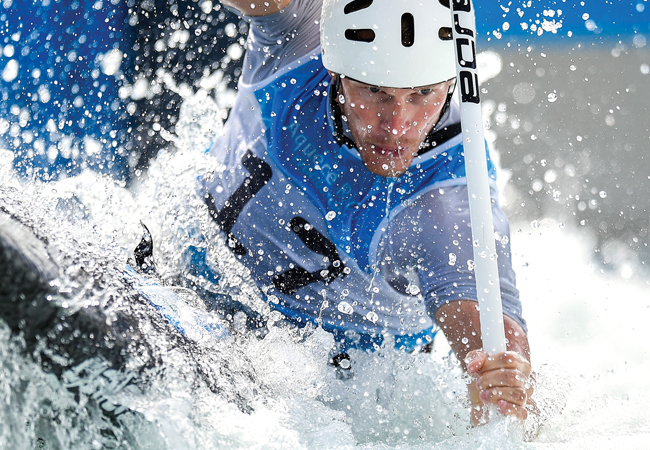 Can Usain Bolt do it again? Will London 2012’s Super Saturday trio of Jessica Ennis-Hill, Greg Rutherford and Mo Farah repeat their amazing exploits? Come 5 August, all eyes will be on Rio 2016, the first Olympic Games to be held in South America. Brazil will welcome 206 countries to 37 venues to compete for 4,924 medals across 42 sports… all in just 17 days of action. It’s breathless stuff.

It may be all over in a flash, but spare a thought for the construction teams that have been working tirelessly to create the venues. The spectacle will take place in four areas: Copacabana, for beach volleyball; Barra, home to the Olympic Park; Deodoro, for aquatics, BMX, and equestrian competitions; and Maracanã, which has two large stadiums. 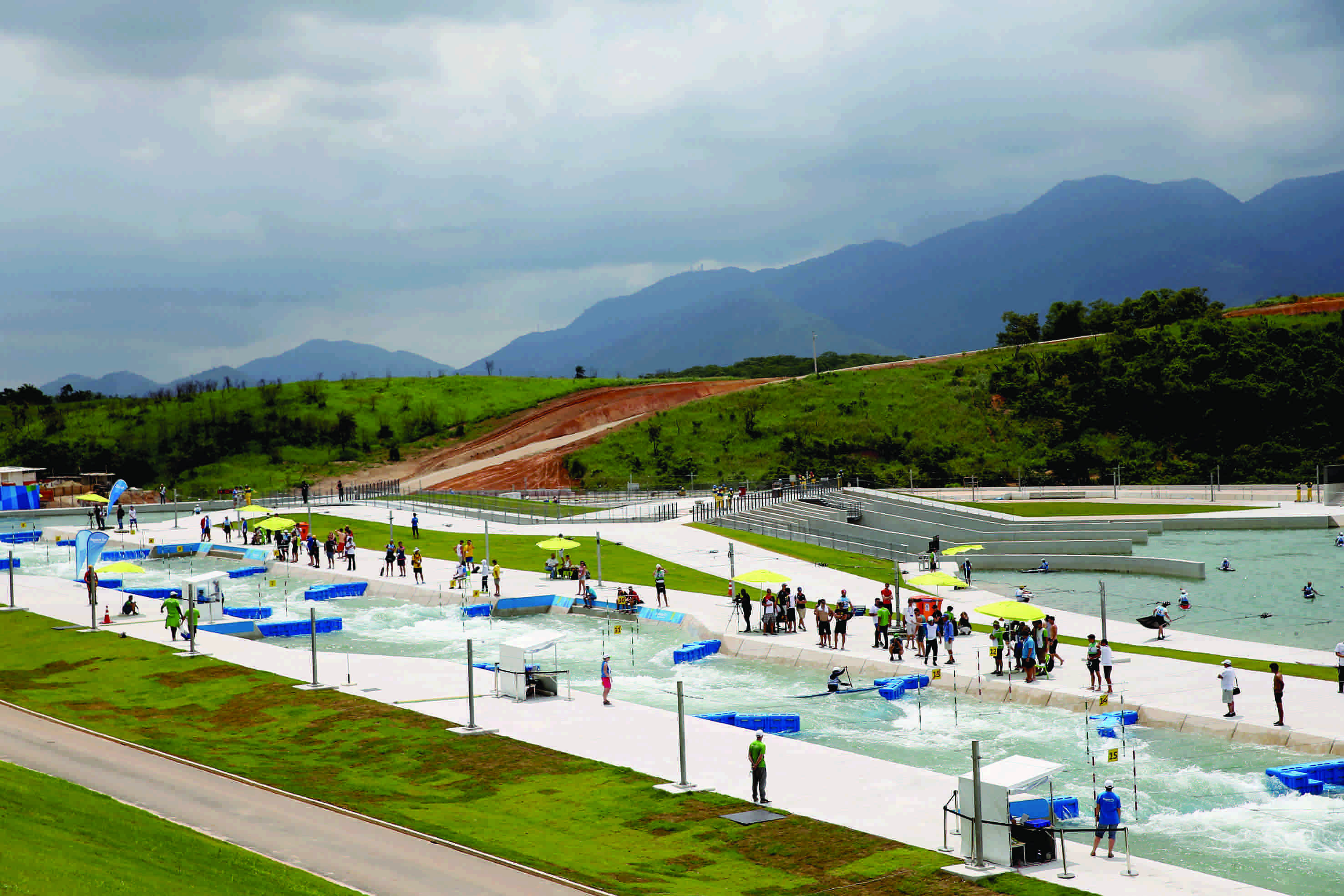 The design of the Deodoro Olympic Park, which will host nine sports, is being led by the Vigliecca Marobal Consortium. Mountain bike, BMX and whitewater venues are grouped together in the Deodoro Extreme Park – or ‘X Park’. Consulting engineer Cundall was part of the team that delivered the London 2012 canoe slalom course and was on board again to develop the Olympic facility in Rio de Janeiro. Cundall is working for the specialist design team, led by Whitewater Parks International (WPI), to deliver a canoe slalom course that meets the exacting standards laid down by the International Canoe Federation (ICF).

Damien Dungworth, associate director at Cundall, is part of the engineering team working on the project, based in Newcastle.
‘As a civil engineer that specialises in hydraulics and loves sport, this is the perfect project for me; big concrete structures, huge water flows and a venue for the best athletes in the world! They are fascinating facilities to design, look at and go on,’ he says.

The London 2012 course, developed with WPI, was an innovative, self-contained, dual-channel facility that minimised energy consumption. This energy-use reduction has been a significant factor in its success in legacy. ‘The London design concept has formed the template for Rio, where we again have a dual-channel facility – the main Olympic competition channel and a smaller training channel,’ says Dungworth. ‘This time, it is slightly smaller, which results in a lower capital cost and lower operating costs.’ 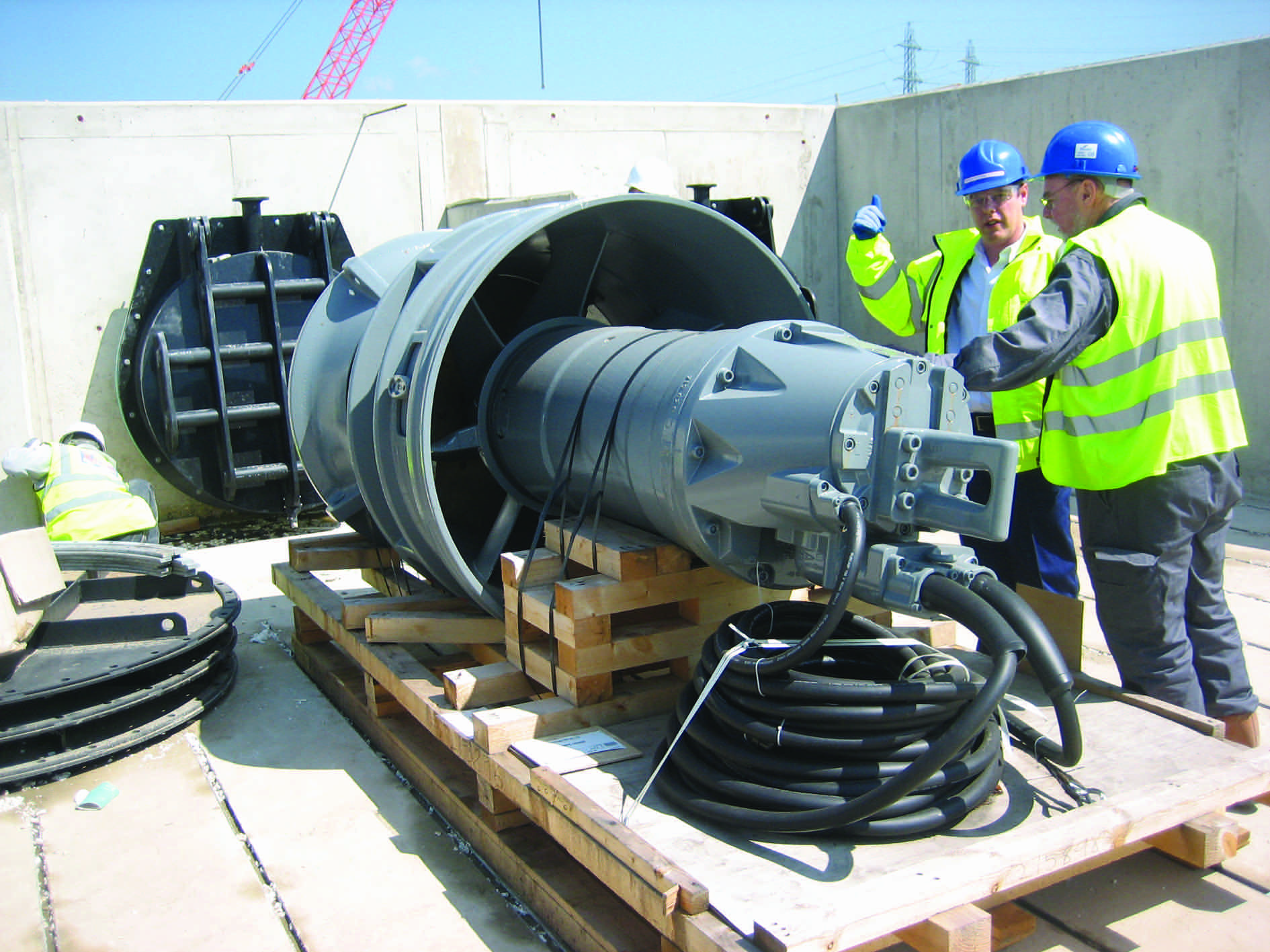 Cundall’s engineering expertise has allowed ICF standards to be met with a reduced head – the height to which the water is pumped from the lake to the top of the channel – and a reduced flow rate down the channel. Energy consumption is reduced by 30% in comparison with London.

Essentially, the venue consists of a self-contained body of water, or lake, with pumping stations to deliver the flow to the start pool at the top of each channel. Water flows down the concrete-lined channel, within which are several obstacles to hold back the flow and create the whitewater. The concrete channel has unistrut cast into it so that plastic blocks can be bolted onto the floor to create a series of movable obstacles.

A series of axial flow, propeller-type submersible pumps – each weighing five tonnes and rated at 350kW – is the heart of the system. A boat-conveyor system is used to take canoes and rafts up to the start pool. ‘We use technology from the car manufacturing and food-processing sectors, and modify and adapt it for these applications – it’s not as if you can just commission a canoe conveyor system,’ quips Dungworth. The final component is the water treatment plant (see panel ‘Clean race’).

An important consideration for the canoe slalom course at Rio is, of course, water quality. This is a water-contact sport and the athletes can be submerged should they overturn. ‘Water quality levels aren’t quite up to swimming pool standards,’ explains Dungworth. ‘We’ve used World Health Organization water environment standards.’ In London, the team opted for a combination of sand filtration and ultraviolet disinfection to achieve the desired quality, but a more robust solution has been chosen for Rio, with the addition of chlorine if needs be. ‘With chlorine, you can vary the dose as required – it doesn’t have to be used to capacity, and that’s the same with the filtration.’

The biggest concern is algae growth. ‘There’s not a lot to filter out unless you get algae growth,’ says Dungworth. ‘It’s a bigger water-treatment system than at London, but that’s the nature of the climate – it is conducive to growth of algae. We design the lake to prevent nutrients getting into the water, which can promote algae to grow. So we slope edges away from the lake to prevent run-off from the land and we discourage birds and wildlife – that’s good design practice.’

For the competition channel there are four pumps – three duty and one standby. The standby is an Olympic requirement so that a pump failure during the games can be accommodated. The pumps operate in parallel with their own independent pipeline systems. As the pipelines are short, with a limited number of fittings, the total head is predominantly the static lift to achieve the 4.5m drop on the channel. The shaft power of each pump is around 265kW for the full flow, a total of 795kW with three pumps. They do, however, have variable frequency drives so that after the games the channel can be run at a lower flow to reduce the amount of energy.

Extensive modelling has been carried out to determine optimum flow conditions into the pumps and where best to place the obstacles to create the right conditions for a challenging course. Computational fluid dynamics (CFD) modelling was used for the former, while a 1:13 scale model was built for the latter. 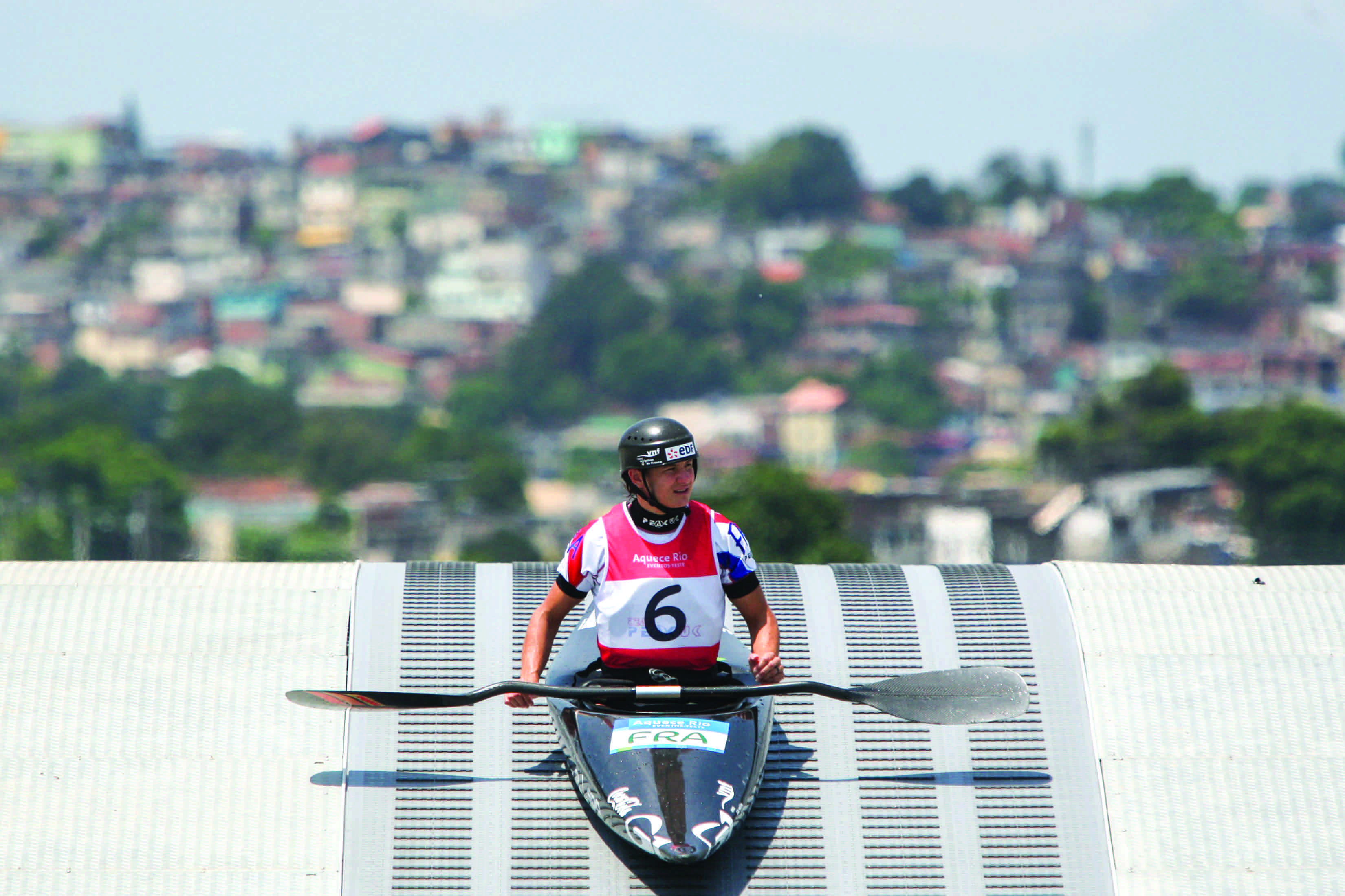 ‘It is important to get good flow conditions into the pumps. You want a nice laminar flow. If you get eddies being created, the pumps can suffer from vibration and then it leaves you with maintenance issues,’ says Dungworth. The modelling allows the team to vary parameters – such as the curve of the perimeter of the lake and the length of the walls extending into the pumping station bays – to ensure a smooth flow.

A team from the Czech Technical University in Prague, some of whom are former world-class canoeists, constructed the 1:13-scale hydraulic model of the whitewater channel segments planned for Rio. This type of modelling is intended to show hydraulic behaviours in various flow scenarios and structural configurations, the results of which informed the final design of the facility. There are steel plates on the bottom of the model channel and the obstacles have magnets on them to allow easy and quick movement. ‘CFD modelling would have been too time-consuming here. Old technology works really well in this application,’ says Dungworth.

The modelling allowed the team to observe hydraulic behaviours and how they could be manipulated by the obstacles placed in the channel to create the whitewater features. ‘It allowed us to confirm all of the key parameters – such as flow rate, slope and width – and to measure velocities and depths, as well as observe flow patterns and hydraulic features,’ says Dungworth. 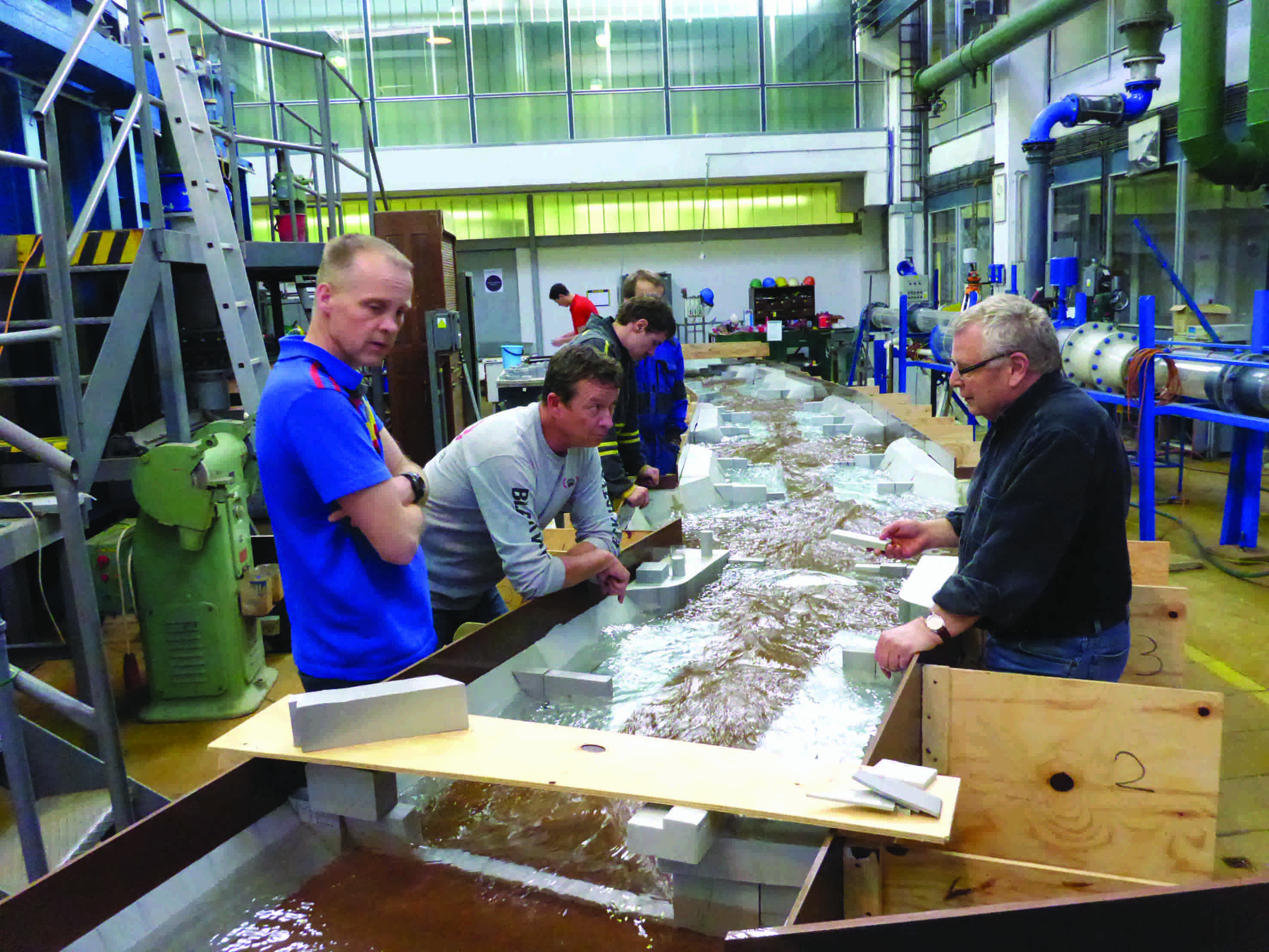 Variables such as channel geometry, gradient, flow rates and obstacle placement were experimented with, and exactly how they influence hydraulic effects – such as depths, velocities, directional shifts, momentum, surging, recirculation and feature formation – was considered.

As these myriad factors were assessed, optimal configurations emerged that demonstrated ample conditions to meet the ICF’s technical requirements for Olympic venues and ensure that the facility was fit for purpose, providing for fair and appropriately challenging competition.

‘The model gave us and the ICF the confidence to implement design development,’ says Dungworth. ‘We took the obstacle locations from the model and replicated them in Rio, and the results were amazingly successful, with very few refinements. You could have run a competition on it first time out.’

The final results are impressive and the Rio facility will certainly have its own unique whitewater character, and realise a new standard of improved operational efficiencies.

The head on the 280m competition channel has been reduced from 5m in London to 4.5m in Rio, and the flow rate from 15m3/s to 12m3/s, with a 30% reduction in energy consumption. ‘These facilities use a lot of energy, so it is important to reduce that as much as possible while meeting competition standards.’ The second, training channel is 200m long, has a 1.8m drop and a flow rate
of 10.5m3/s.

Precautions against the Zika virus

The threat of being bitten by mosquitoes carrying the Zika virus, at the canoe slalom, are minimal. The mosquitoes breed in stagnant water and the slalom course features fast moving chlorinated water.

The International Olympic Committee says Games venues would be regularly inspected to ensure puddles of stagnant water are removed, minimising the risk of athletes and visitors coming into contact with the insects.

The British Olympic  Association says anyone going to Rio should use insect repellent and seek health advice from their GP or a travel clinic in advance of their trip.

Cundall and WPI’s efforts to minimise operating expenses will help to ensure that a vibrant post-Games legacy can be achieved. As well as recreation, the course will provide an amazing venue for school and scout groups, commercial rafting, and amateur and professional sport. It will also be a training ground for fire and rescue teams.

Dungworth is excited about seeing all the team’s hard work come together in August. ‘I am looking forward to watching the Olympics on the television and proudly reflecting on the journey that we have been through to create such a dynamic and spectacular venue.’