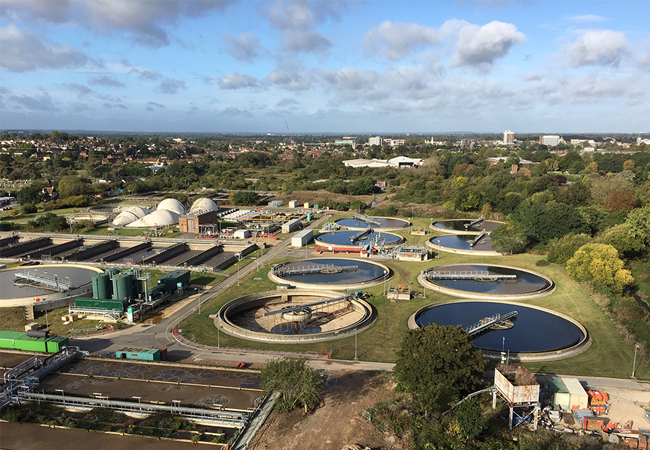 Thames Water and Kingston Council have unveiled plans to use heat recovered from a wastewater treatment plant (WWTP) in Kingston upon Thames, southwest London, to provide low carbon heating for more than 2,000 homes in the borough.

Under the partnership, heat recovered from the effluent leaving the sewage-treatment process at the WWTP will provide clean, green heat and hot water to new homes soon to be built under the regeneration of the nearby Cambridge Road Estate. If successful, up to 7GWh of low carbon heat could be supplied per year.

The scheme in Kingston is still being finalised. Currently, Thames Water flushes 69 million litres of clean warm water from Hogsmill WWTP into the Hogsmill river every day, as treated effluent. This effluent is at a temperature of between 10-15°C all year round. 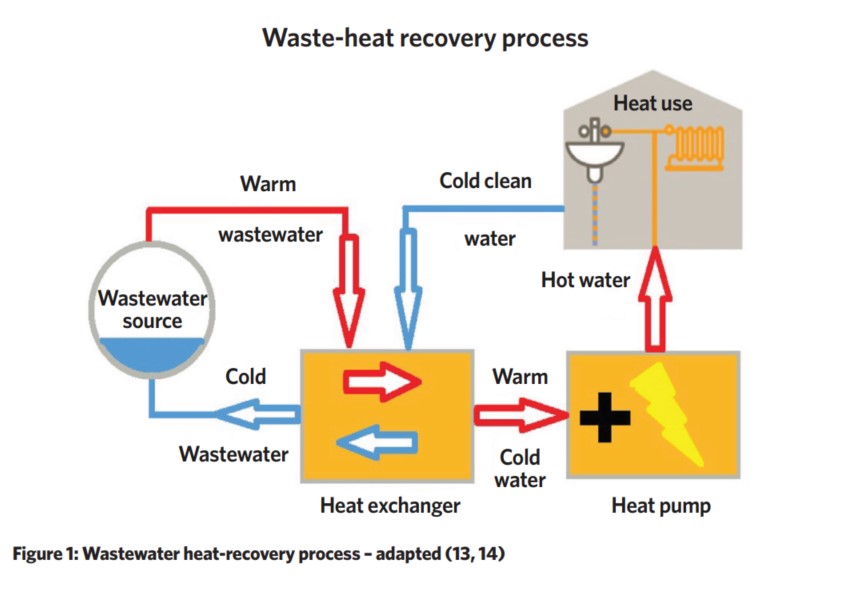 Under the proposal, one-third of this effluent will be piped to a new energy centre, where heat will be extracted before it is discharged. A heat pump will concentrate the reclaimed heat, which will then be piped to the district heating system being built to serve the 2,170 new homes on the redeveloped housing estate. If successful, the scheme could be expanded to public and commercial buildings in Kingston town centre.

This is the first project of its kind in England, but similar schemes are already operating successfully in cities such as Oslo, Vancouver and Beijing, which reuse heat from the billions of litres of warmed water that end up in sewers every day.

Closer to home, in Scotland, Borders College, Galashiels, has been recovering heat from wastewater since December 2015. Here, the system is producing 1.9GWh of heat annually, which is about 95% of the heat demand of the college, with no negative impacts on the operation of the local sewer network. The value of gas saved is around £10,000 per year, while carbon savings as a result of the scheme are estimated to be 170 tonnes of CO2 a year. 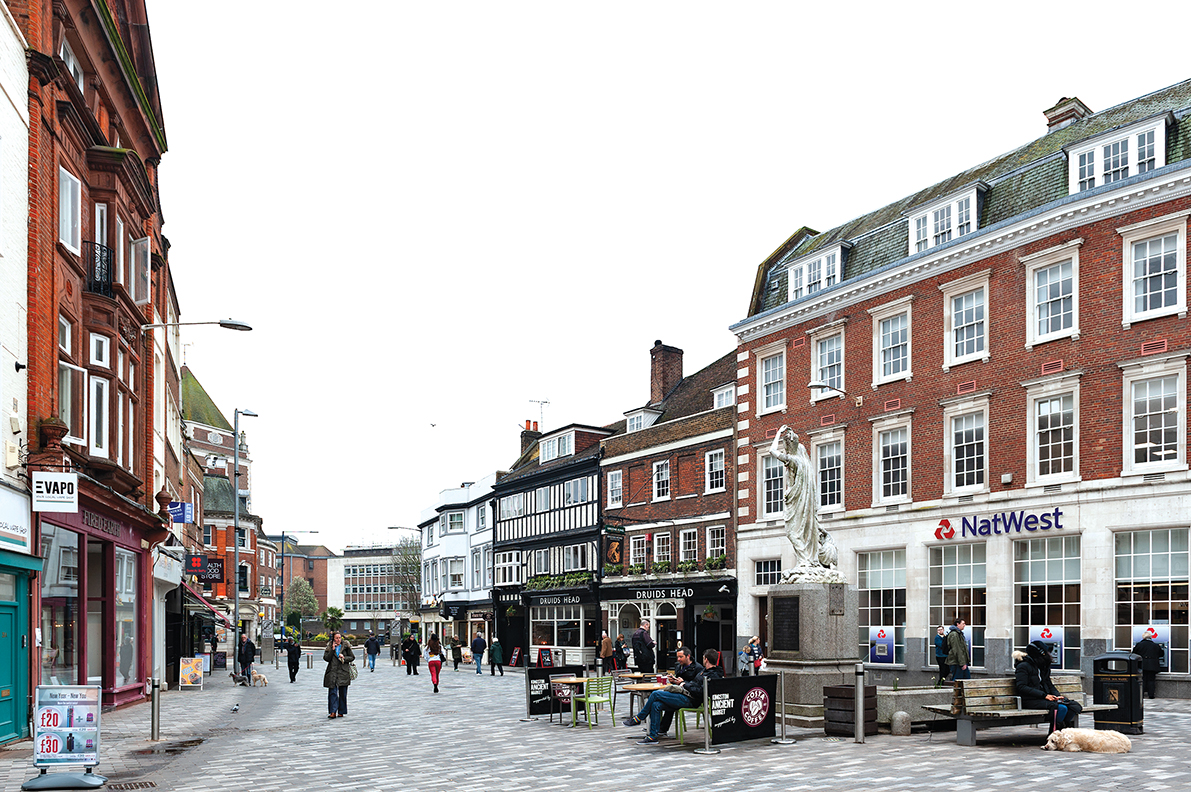 The scheme could potentially heat buildings in Kingston

Heat in sewers is a huge global resource. The heated water from showers, dishwashers and washing machines, for example, goes down the drain, literally, and into the sewer. In Switzerland, it is estimated that 6TWh of thermal energy are lost every year through the sewage system, corresponding to around 7% of the country’s total demand for space and hot-water heating.

In the USA, the figure is higher, with Americans estimated to flush a massive 350TWh of energy down the drain each year – the equivalent of heating 30 million homes a year.

In the UK, energy from the 16 billion litres of sewage wastewater dumped in the sewers every day could, theoretically, provide more than 20TWh of heat energy annually. This is enough to provide space heating and hot water to 1.6 million homes, according to a paper on heat recovery presented by S Farman Ali and A Gillich at the 2020 CIBSE Technical Symposium.1 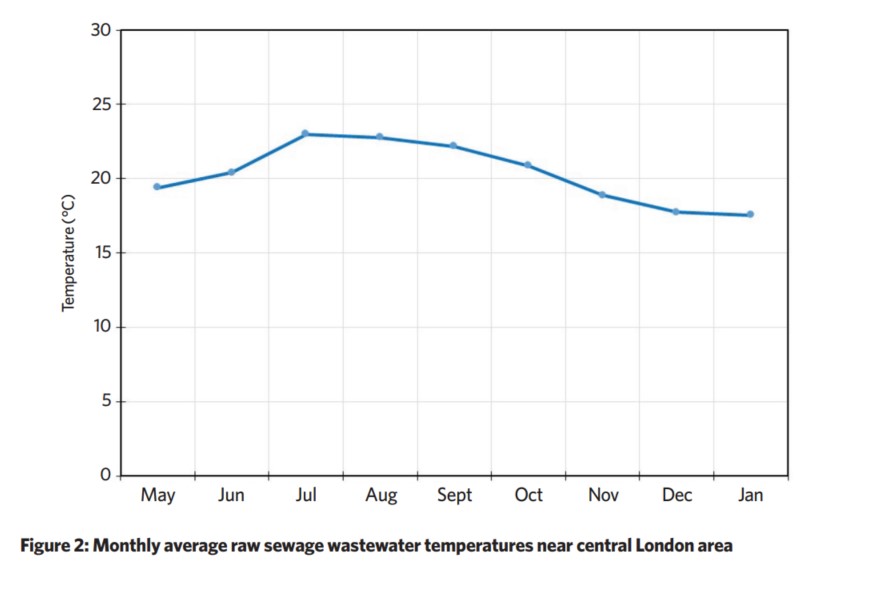 This paper states that the average temperature of wastewater in UK sewers varies between 10°C and 25°C, depending on the time of year and whether the sewer is combined to carry rainwater. By the time the wastewater has reached the treatment plants, which are often situated out of town, it will have cooled to approximately 10-12°C.

However, treatment processes in the WWTP to clean the water can reheat the wastewater by 2-3°C, so the average temperature of water leaving the treatment plant is a consistently between 12°C and 15°C year round.

The task of recovering heat from urban wastewater can be performed either before the WWTP – where the wastewater is untreated – or after it has been treated in the WWTP. Upstream heat recovery has the advantage that the wastewater is at a higher temperature and the extracted heat is more likely to be close to where it is needed.

However, there are limits on the amount of heat that can be extracted because the performance of the WWTP is dependent on the wastewater being maintained above a temperature of about 10°C. 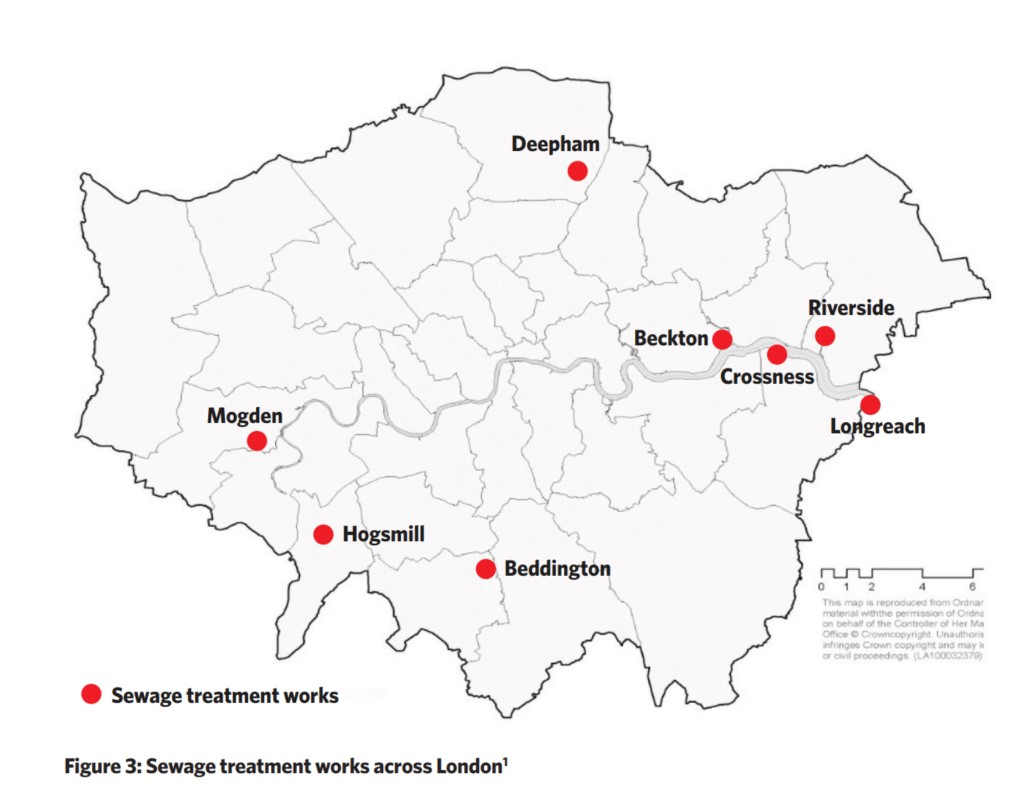 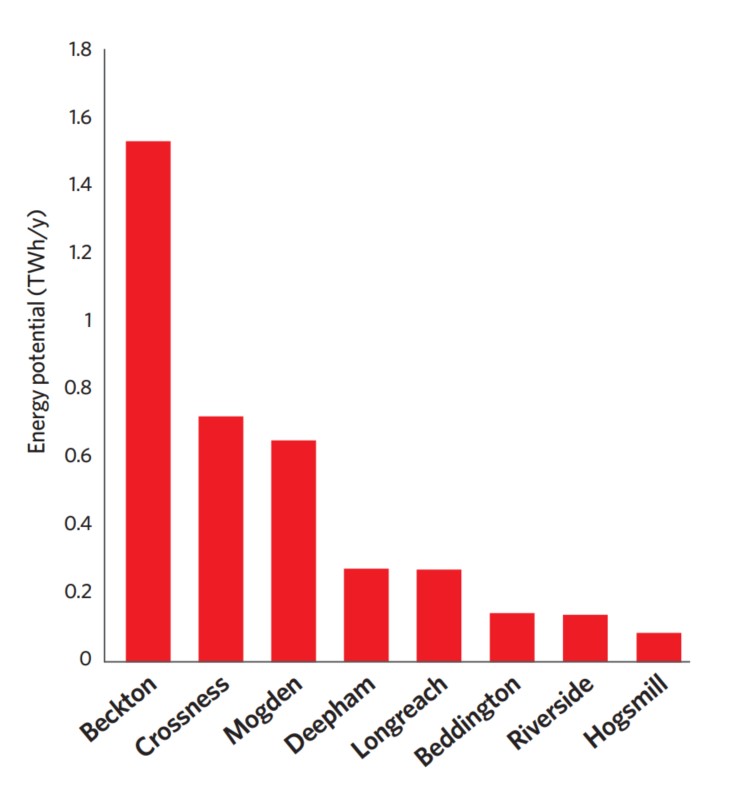 The downside of this arrangement is that the heat exchanger is likely to require frequent maintenance to remove fouling and biofilm growth. In the case of combined sewers, natural events such as rainfall and snow melt could also alter the water temperature significantly, affecting the efficiency of the system.

Heat recovery downstream – after the water has been treated in the WWTP but before the effluent is discharged – has several advantages. Perhaps the biggest advantages are that the wastewater is cleaner, the flow of water is relatively constant, and removing heat post-treatment will have no impact on the performance of the WWTP.

The downside to using treated wastewater is that WWTPs are often located remotely, away from homes and businesses, where there is less demand for the recovered heat.

For both upstream and downstream applications, because the sewer water temperature is significantly lower than that required for heating, the recovered heat cannot be used directly, so a heat pump is needed to increase its temperature. Kingston Council’s Cambridge Road Estate scheme will recover heat downstream of the treatment plant. 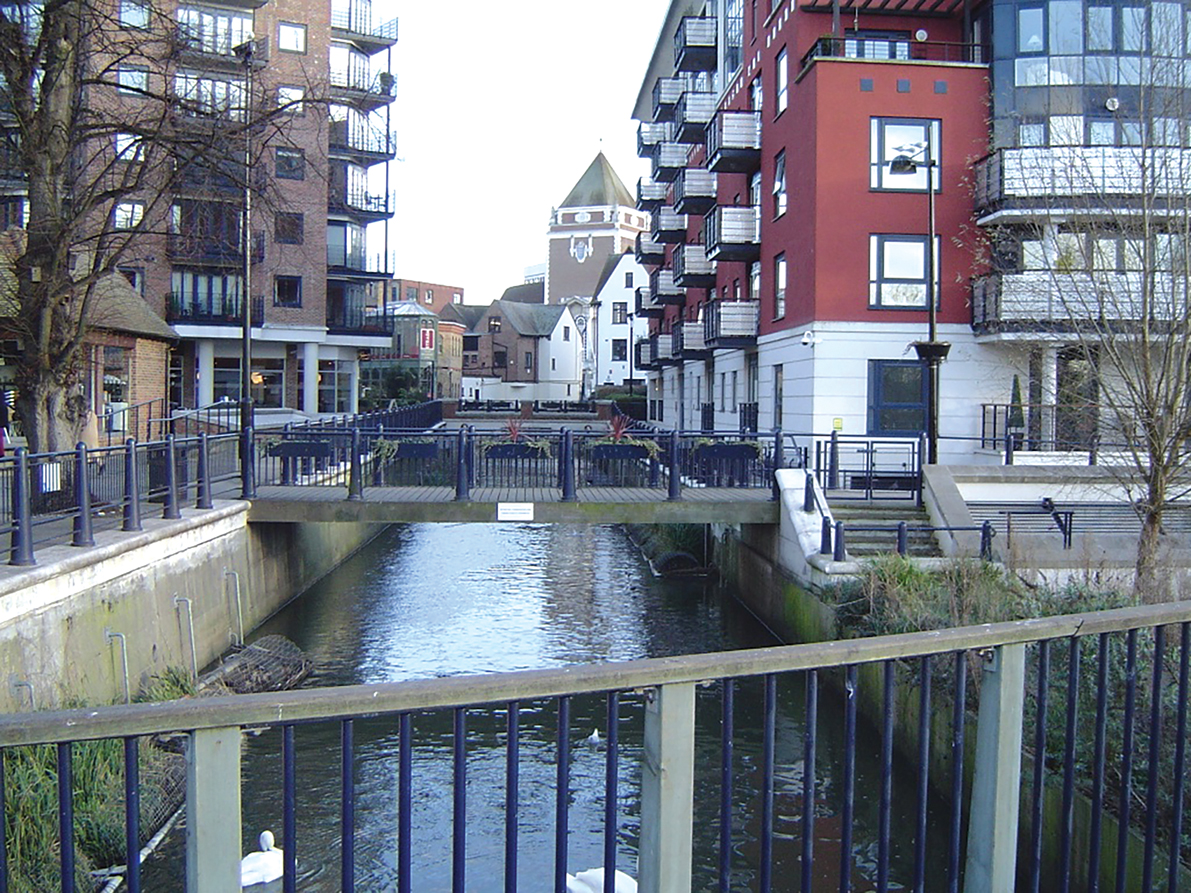 In total, there are eight wastewater treatment plants in London, which – Ali and Gillich’s paper says – have the potential to recover approximately 4TWh of heat annually. The largest of Thames Water’s WWTP is Beckton, in East London, with an average treated flow of more than 1,200 million litres per day.

According to Ali and Gillich, this has the potential for 1.5TWh of heat energy to be reclaimed annually – enough to provide space heating and hot water to more than 100,000 homes. In contrast, the Hogsmill plant is Thames Water’s smallest WWTP, with a treated daily flow of just 69 million litres.

Nevertheless, if the Kingston scheme is successful, it will demonstrate the potential to recover heat from treated wastewater and should act as a model for future schemes.

Whenever you flush a toilet or empty a sink, the wastewater goes down the drain and into a sewer. That sewer will join a network of other sewers, which eventually deliver the wastewater to the sewage treatment works.

The sludge collected at the start of the process ends up as fertilisers for agriculture, or it is used to generate energy by either: