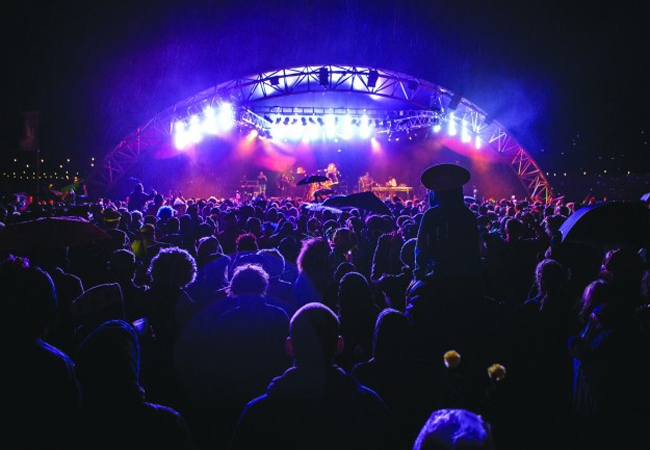 The Shambala Festival is now totally powered by renewable energy, 94% of which is waste vegetable oil. Credit: Louise Roberts

A summer music festival holds the promise of hedonistic days in a bucolic setting, somewhere deep in the British countryside. However, the reality is not normally so serene – or green. The peace is often disturbed by diesel generators powering fast-food vans, while waste produced by thousands of campers turns sites into rural shanty towns, with fields knee-deep in plastic glasses, burger boxes and abandoned tents.

Thankfully, a growing number of events – such as the Shambala Festival, in Northamptonshire – are taking their environmental responsibilities very seriously. Powered entirely by waste vegetable oil, wind and solar energy, Shambala has zero disposable plastic on site and has reduced its carbon footprint by more than 80% in five years. Last year, it emitted 0.4kg of carbon per person per day – compared with 2.23kg in 2009 (see panel Festival power). 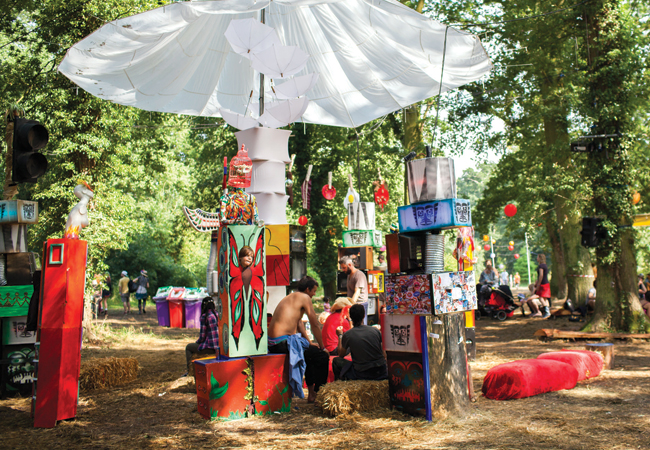 Shambala has been advised by not-for-profit organisation Julie’s Bicycle, which works with more than 1,000 groups in the UK and abroad to help measure, manage and reduce the environmental impact of festivals, outdoor events and arts venues.

Julie’s Bicycle was formed eight years ago because no-one else was focusing on the green credentials of arts venues and events. ‘It’s difficult to categorise arts venues by building type as they are idiosyncratic by their nature,’ says Luke Ramsay, environmental sustainability manager at Julie’s Bicycle. 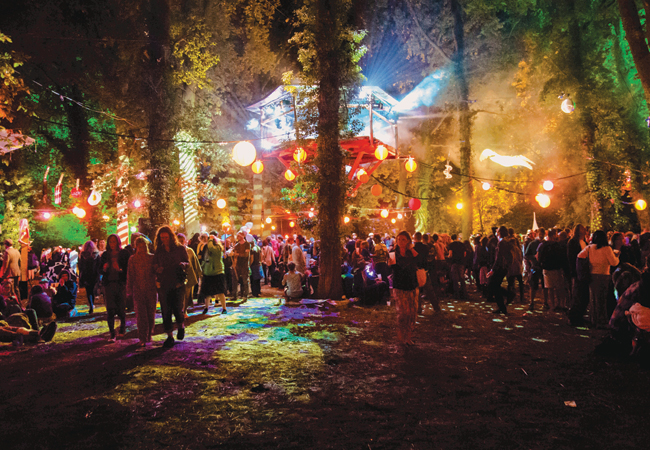 ‘They might host one-off performances, be temporary structures or multiple-use spaces. Take the Bush Theatre [in Shepherd’s Bush, London], for example – it’s a theatre, with a makeshift shop that’s here for one day, an office and a café. It has four different functions, so it’s difficult to get a rule that applies to all.’

Creative organisations can now compare their performance or venue with others by using extensive industry benchmarks created by Julie’s Bicycle, in partnership with the University of Oxford.

Over the past five years, the organisation has been collecting environmental data from hundreds of festivals and creative groups using its Creative Industry Green Tools (IG Tools). These are now well-established – covering outdoor events, arts buildings, offices, tours and productions – and their use has been made a requirement for funding by Arts Council England and Creative Scotland.

Champion of the arts

Julie’s Bicycle was founded in 2007 at a time when the music industry’s main response to global issues was Live Earth. This, Ramsay says, symbolised both the opportunities and challenges – while the sector’s interest in climate change was encouraging, flying artists halfway around the world was not. In response, a small group of music executives met in Julie’s Restaurant, in Holland Park, London, and agreed that the industry had to change. They thought it hypocritical for jet-setting pop stars to preach about climate change before they had addressed their own carbon footprints – and so Julie’s Bicycle was born. 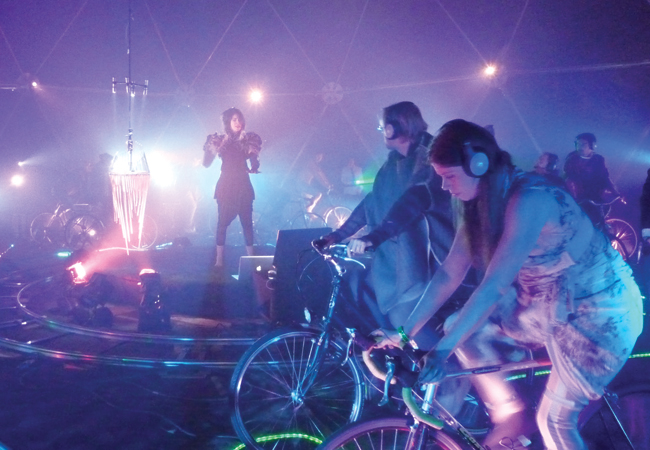 The company provides the creative sector with the tools, support, expertise and advice to reduce energy use, water consumption and waste, while encouraging recycling and a sustainable supply chain.

Originally, Julie’s Bicycle restricted itself to tackling environmental issues in the music industry, but soon broadened its remit to the cultural sector, covering theatre, visual arts, museums, dance, combined arts and literature. Most recently, it has started ‘greening’ the offices and operations of design and advertising agencies. ‘The philosophy remains the same – to inspire and show that change can happen,’ says Ramsay. ‘Like any sector, the arts industry needed a champion to help it bring about change. We help organisations understand how they can engage with environmental issues.’

Shambala Festival has reduced its carbon footprint by 81% in five years, and was presented with the international A Greener Festival Award for the second year running in 2014.

It is now 100% renewably powered, achieving the three-star Creative Industry Green (IG) certification from Julie’s Bicycle last year. To maintain the rating, the organisers have to push the boundaries of sustainability and, this year, will be focused on improving recycling rates, carbon accounting and public transport uptake. In 2014, Shambala’s Bring a Bottle campaign stopped the sale of 10,000 single-use plastic bottles, and 100,000 bar cups were reused by visitors. Despite an increase in audience capacity, the festival released 21 tonnes of carbon, compared with 73 tonnes in 2009.

The biggest carbon footprint was crew travel (26%) and audience travel (63%), with 75% of festival-goers using their own vehicles to get to the venue. However, the event’s biodiesel shuttlebus was used by more than 1,000 people, and 709 journeys were shared – a 300% increase on 2013. Shambala has co-founded The Energy Revolution, which aims to account for audience travel. If festival-goers plan to arrive by car, they are encouraged to make a donation, which is invested in renewable energy.
Shambala’s recycling campaign resulted in 3,942 people using the recycling exchange and claiming £10 back, and a 77% recycling rate was achieved (41% in campsite pens). Fare Share South West collected one tonne of useable food from traders at the end of the event.

IG Tools are a free set of carbon calculators, developed by Julie’s Bicycle specifically for the creative industries. They are used by 2,000 organisations – across 40 countries – to understand the environmental impacts of buildings, outdoor events, productions and tours. They measure impacts in five areas:

Different analyses are available; organisations can benchmark themselves against an average in their sector or against those that represent best practice.

In 2012, Arts Council England became the first arts-funding body in the world to embed environmental sustainability into the funding agreements of its major programmes. It rolled out mandatory environmental reporting and action planning across 700 organisations between 2012 and 2015.

Organisations are required to report their electricity, gas and water use at least once a year, and to put in place both an environmental action plan and policy relevant to their business. ‘It’s not just a data-collection exercise,’ says Ramsay. ‘People are invited to submit data, if it’s meaningful and helps to inform action. We now have a wealth of data, which enables us to highlight best practice.’

He adds: ‘Our approach is to work around some of the more rigid policies and practices – the ISOs and BSIs – that do not necessarily work for the cultural sector. Sustainability should not be about box-ticking; it should be something bigger than that.

‘We want our tools to be an opportunity, not a regulatory burden. We have a positive and actions-based approach – it’s important to have a conversation about things that can be done differently, and how to comply in the most cost-effective way, rather than pointing out what is bad.’

Ramsay says environmental action has resulted in financial gains and positive reputational impacts for more than half of the participating Arts Council-funded organisations, and – as they align sustainability to their core values – 73% are reporting an improvement in team morale and wellbeing.

IG Tools also form the basis of the Creative Industry Green (Creative IG) certification scheme, which involves a carbon and environmental-management auditor from Julie’s Bicycle assessing an organisation’s performance over a year. To date, it has certified almost 200 organisations in five years and covers festivals, venues, outdoor events and offices. 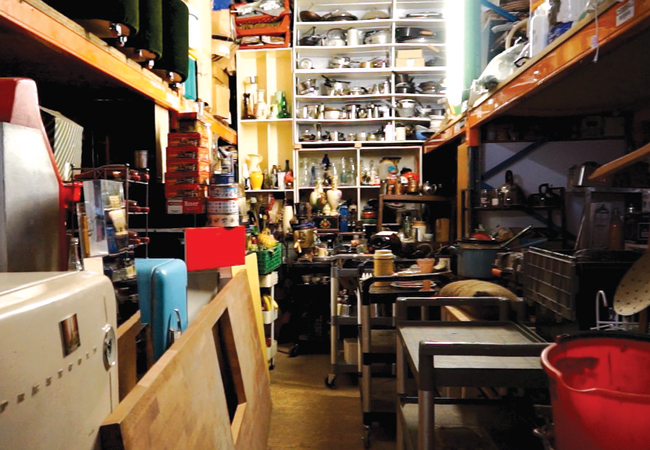 The certification scheme uses IG Tools to record: energy and water use; waste volumes, including the percentage of waste diverted to non-landfill sources; travel footprint; and impacts specific to the sector. One, two or three stars are awarded, and an organisation is assessed across four criteria:

As well as reducing their environmental impacts, Ramsay says organisations are promoting sustainability through their work. For example the Royal Court, in London, put on 2071, a one-man play that explored the science behind climate change, and featured a programme of talks on the subject.

The coveted three-star Creative IG rating has been achieved by Wembley Stadium, the Bush Theatre, Hammersmith’s Lyric theatre and the Shambala Festival. Creative IG is compatible with, and complementary to, other environmental certification schemes, including BS8901, ISO20121, ISO14001 and the Carbon Trust Standard.

Sustainability should not be about box-ticking; it should be be something bigger than that

The partnership between Julie’s Bicycle and Arts Council England was renewed in 2015, and is set to deliver a nationwide programme of workshops, webinars and resources to push for change at all levels.

‘We work with an open-minded sector – it’s really refreshing. There’s been a strong uptake in environmental reporting,’ says Ramsay. The figures support his claim.

Data collected from more than 490 organisations via IG Tools showed a 6.3% decrease in carbon emissions in 2013-14, compared with the year before, representing a saving of 7,063 tonnes CO2e or £1.25m. The carbon saved would fill the Royal Albert Hall 47 times over.

This was achieved despite a 16% increase in cultural activity during the same period. ‘Proof,’ says Ramsay, ‘that the creative community can grow without increasing its impact on the planet.’

Ramsay says TM46 benchmarks for cultural buildings should be superseded by the new dataset. ‘The current A-G DEC rating is too lenient on energy performance – especially on gas consumption – which is having an effect on peoples’ perception of how well they are doing.’

He says that until national benchmarks are revised, arts organisations should receive an A-G rating based on standards devised by Julie’s Bicycle, which can be shown alongside their display energy certificate (DEC). CIBSE technical director Hywel Davies confirms that the Institution would like to incorporate Julie’s Bicycle’s benchmarks into TM46. He says CIBSE is seeking discussions with Department for Communities and Local Government (DCLG) officials to agree an update mechanism for TM46.