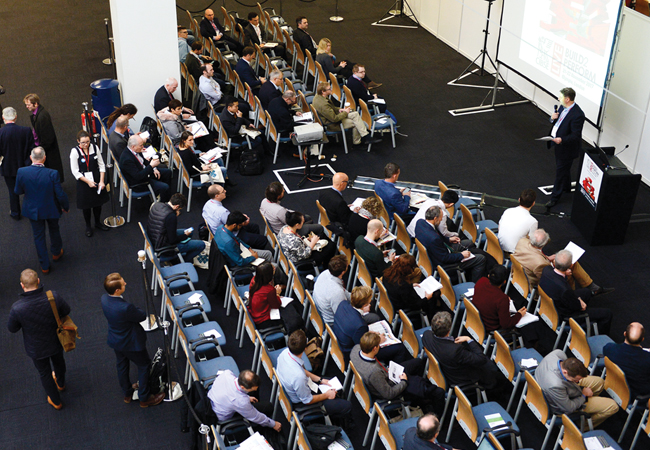 Taking note: one of the scores of streams hosted by Build2Perform Live

The event also featured a programme of presentations from exhibitors, including CPDs, giving delegates an even wider selection of content. 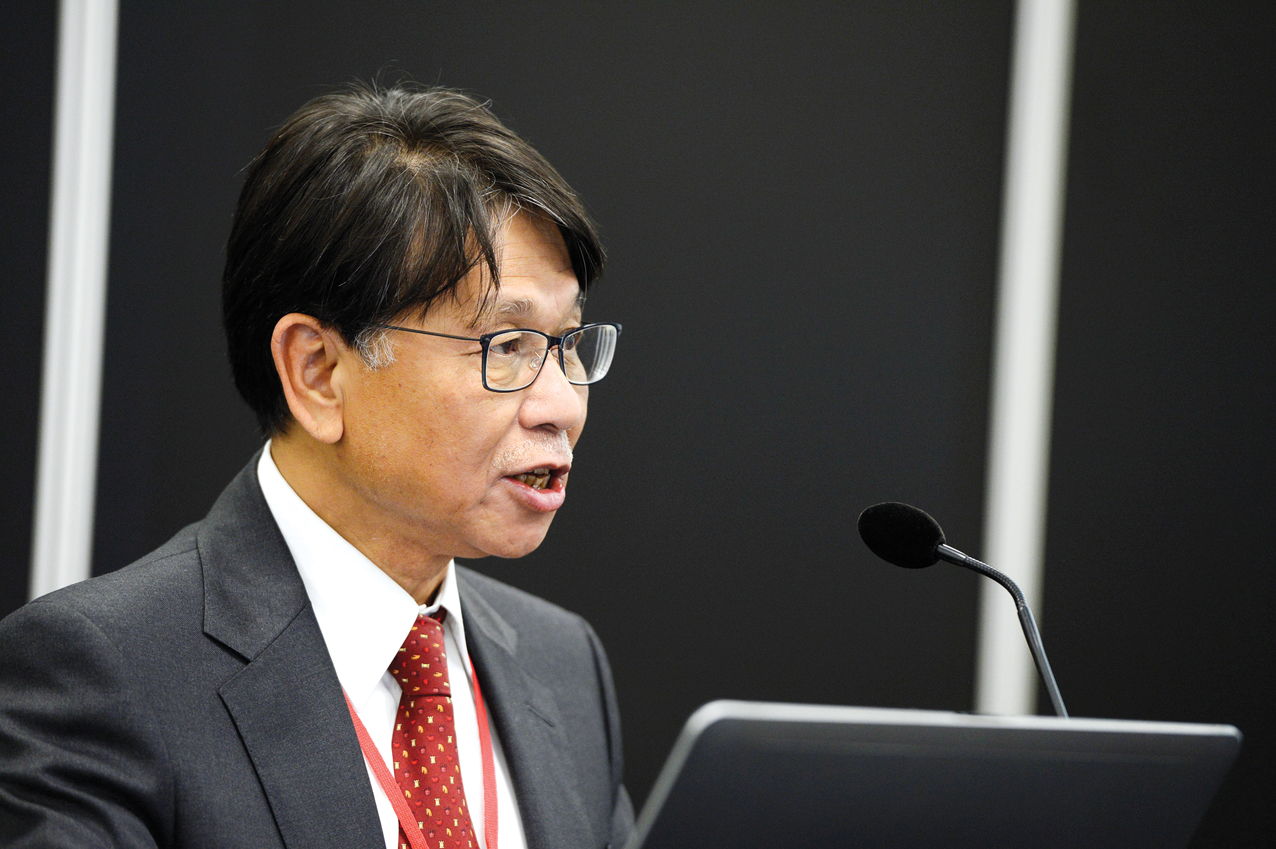 CIBSE’s Young Engineer Networks were at the fore, organising three seminar streams. These included ‘How to engage better with clients’, which saw energy managers and engineers at the Co-op, LandSec and M&S discuss how they are working with supply chains to improve building performance (see panel, ‘The client side’).

CIBSE Fellows also gave the benefit of their industry experience at the ‘Fellows unwritten rules of building services’ seminar.

The event saw the official launch of a new CIBSE group, several award announcements and teasers for new CIBSE publications, including TM40 Health and Wellbeing, which aims to guide CIBSE engineers through the plethora of research and standards that have been published on the subject. 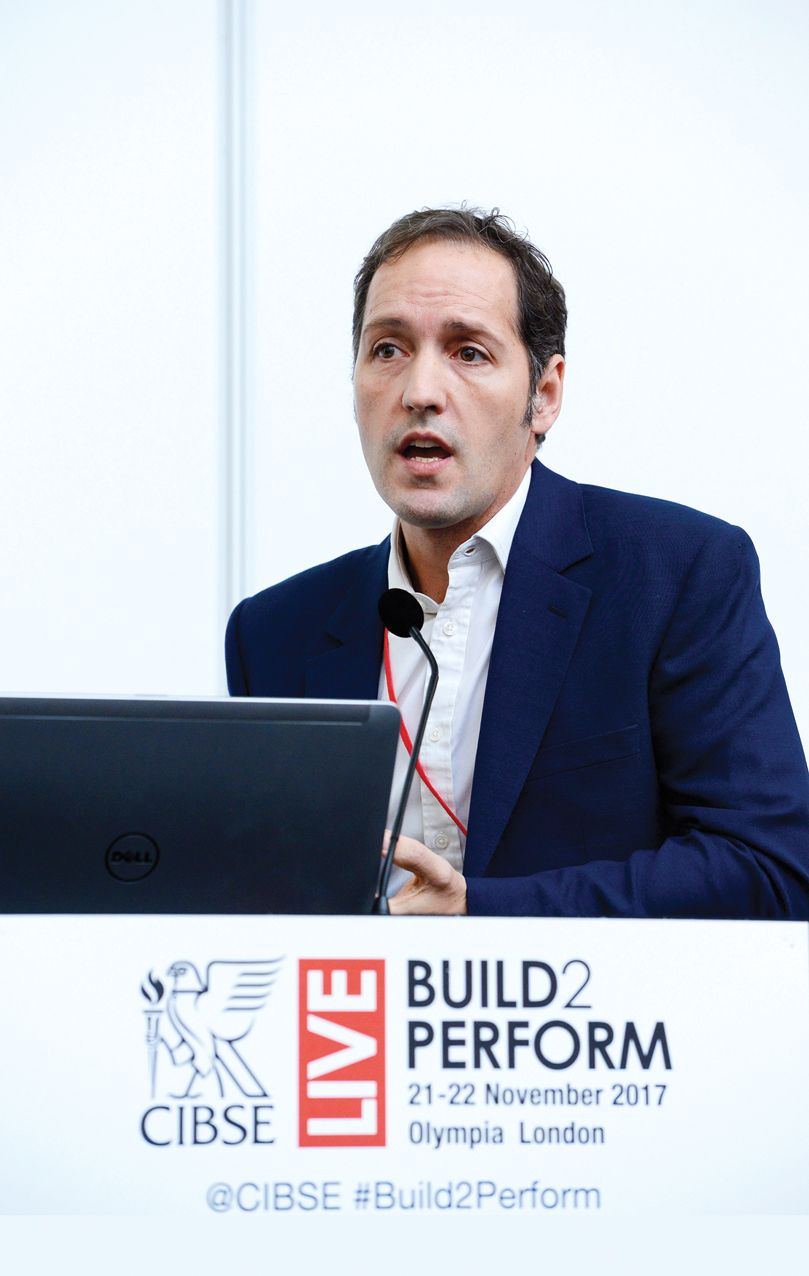 As well as presenting the shortlist for the 2018 Building Performance Awards (see page 24), the event introduced five inaugural members of the Society of Digital Engineers’ hall of fame (see panel ‘Digital hall of fame’), while the Green Infrastructure Design Challenge was launched with ARCC/UKCIP.

The conference was opened by CIBSE President Peter Y Wong, who focused on the burgeoning wellbeing agenda and the opportunity the Clean Growth Strategy presented to the industry, despite Brexit.

On the digital front, the new Society of Digital Engineering hosted two half-day sessions, one on design and another entitled ‘Make’, which focused on building. In ‘Design’, Carl Collins covered the requirements that project clients have to do to enable BIM Level 2 processes.

Madeleine Velupillai and Charles Sainsbury, from LandSec, looked at the science-based target approach to measuring building performance in their property porfolio. The key was to ensure all team members shared experiences, both good and bad.

Dr Maria Spyrou revealed details of M&S’ Plan A for 2025. The three pillars of this were described as ‘happy people, transformed communities and zero-waste business’. Meanwhile, the Co-operative Group’s head of engineering, John Bradshaw, described the post occupancy evaluation at Angel Square in Manchester. He spoke about the issues with supply for the CHP powered by rape-seed oil, and the challenge of keeping on top of controls, which he described as being like painting the ‘Forth Bridge.’ 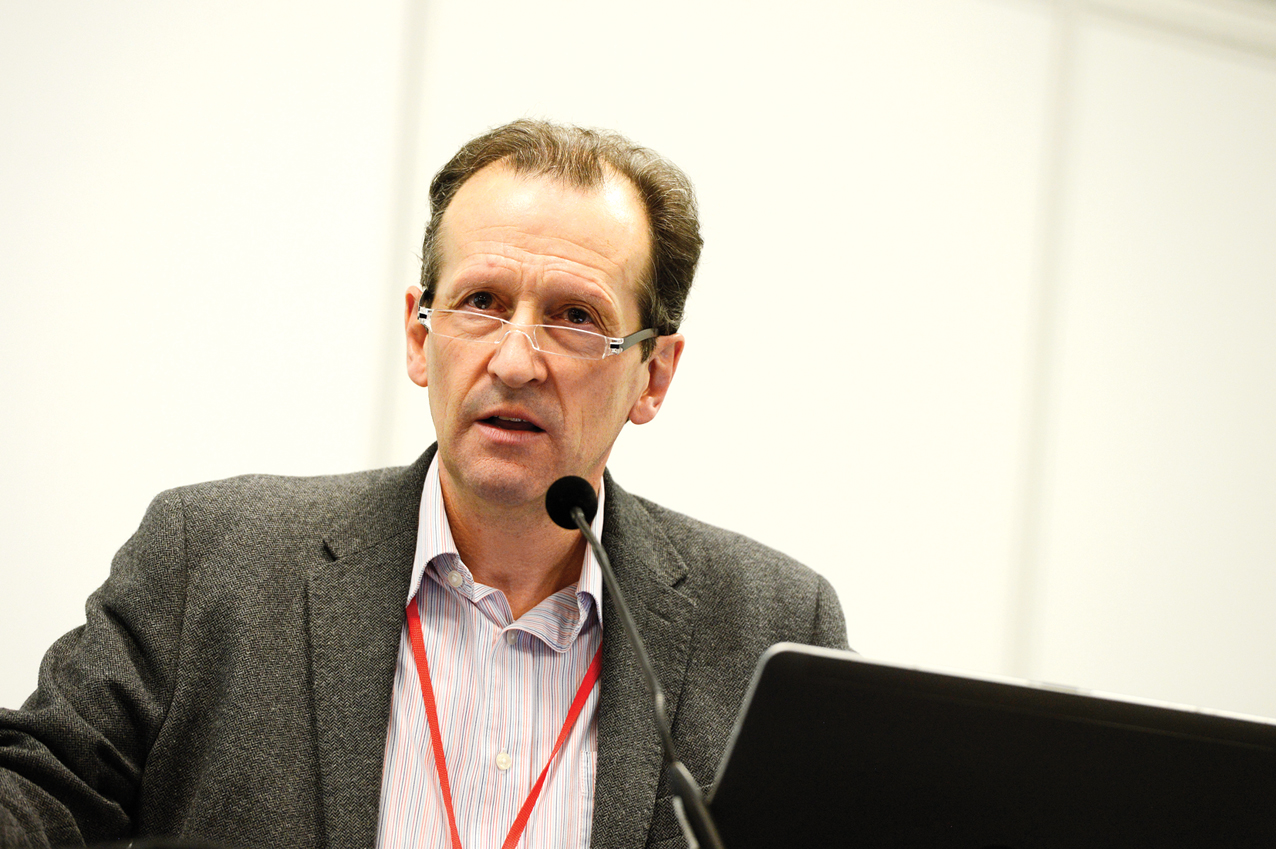 On day two, in the session on end users’ relationship with building controls and management, speakers said occupant education and post-handover aftercare were key to a good controls strategy.

Dr Michelle Agha-Hossein, soft landings operational lead at BSRIA, said a simple-to-understand guide for both the user and the facilities manager (FM) is essential, as well as helping users understand how they should interact with their building during the early stage of occupancy.

She said: ‘People are more productive if they have some level of control over their environment. However, when a building has both automatic and manual controls, they can create conflict.’

For example, in one building, users forgot to open the blinds in the afternoon, so the perimeter lights – with daylight sensors – were always on. Occupants were not aware of this, so there was conflict between the automatic and manual control systems. 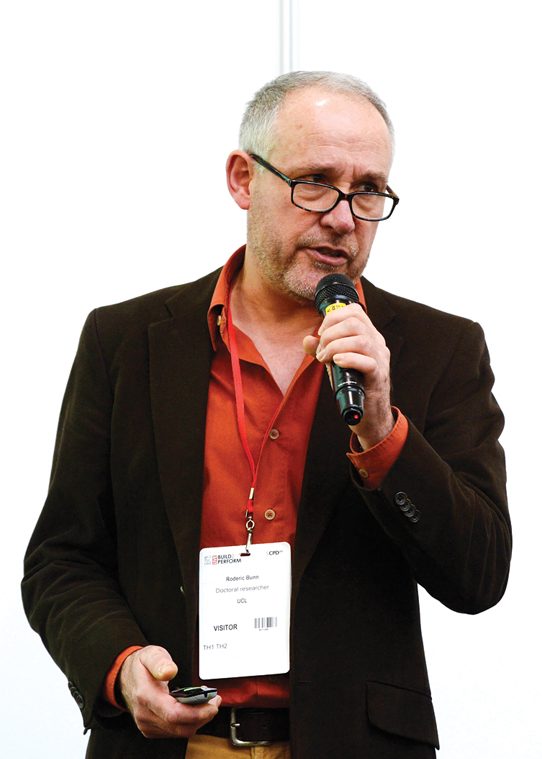 This could lead to even worse consequences; in another building, Agha-Hossein said because occupants opened the windows instead of turning down the heating in the afternoon, the FM simply encased the controls in a locked box on the wall, rather than educating the users.

Kate van Someren, research engineer at the University of Reading, said controls should be intuitive, so anyone can use them without instructions. Controls with feedback – like an audible click – can help users understand and engage with them. ‘If we design for the most vulnerable users, everybody benefits,’ she added.

Dr Zack Gill, senior energy solutions engineer at Fortem Energy Solutions, said he witnessed good practice at an academy in Folkestone, Kent, where the FM reported energy use to the finance director on a weekly basis, and the building started saving £40,000 a year on energy bills. ‘Championing more performance-based targets will ensure all stakeholders pull up their socks and work together to deliver well-performing buildings, and then follow up on them,’ he said. 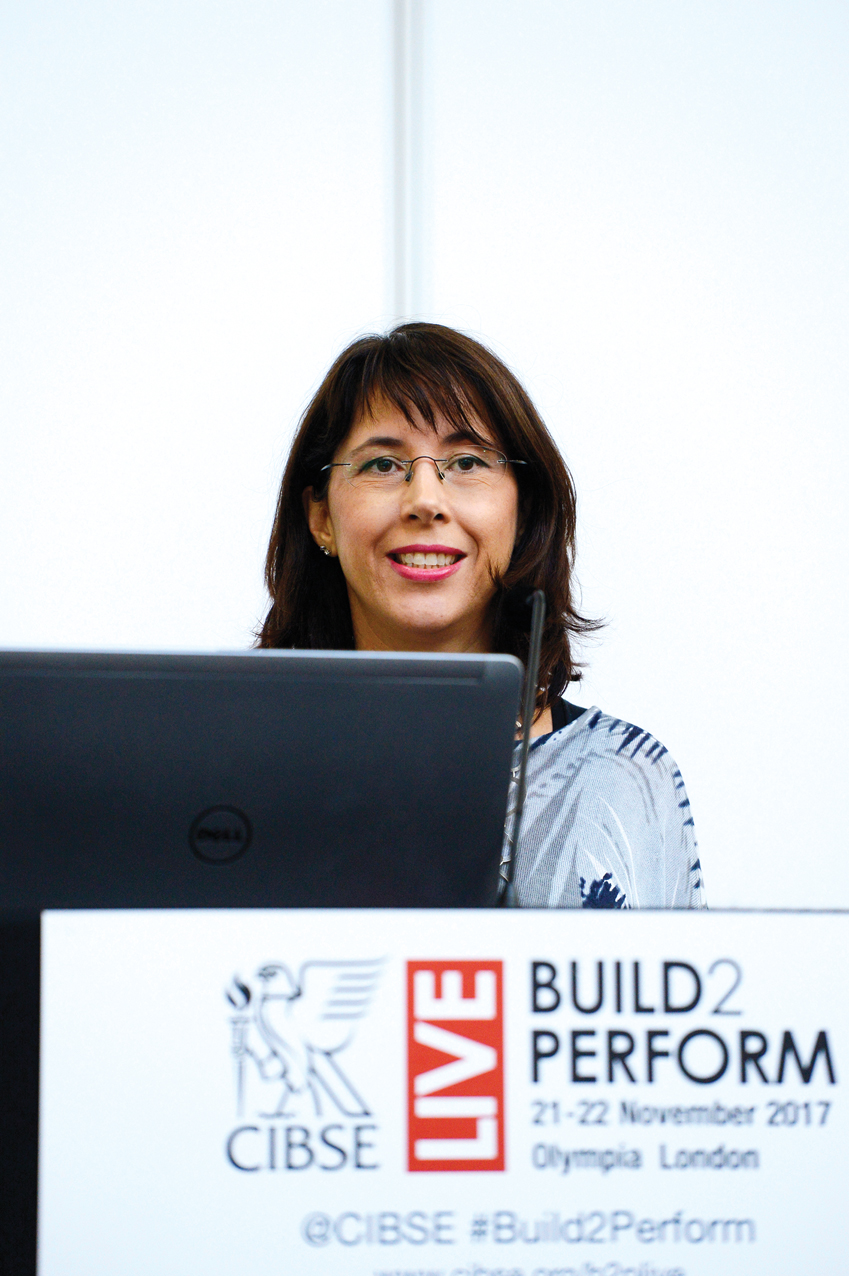 Richard Tetlow, sustainability consultant at Aecom, said the real challenge is trying to communicate the design intent of a control system to the building occupants.

During a post-occupancy evaluation at one school, Tetlow discovered that the project ran out of money, so a natural ventilation strategy – with night cooling – replaced a mechanical solution. ‘The users left the night vents open all the time, so the BMS engaged the heating earlier to warm up the building. Because the industry is so siloed, it’s hard to ensure all the systems are linked up.’

At the resilient cities session, Lee Chapman, professor of climate resilience in the school of geography, earth and environmental science at the University of Birmingham, said big data can help safeguard critical infrastructure. The Birmingham Urban Climate Laboratory’s HiTemp project is examining the city’s urban heat island (UHI) by deploying the densest air temperature-sensor network in the world to identify, model and promote adaptation to the impacts of urban heat and climate change on the people and infrastructure.

Kyle Gray @KyleAlexGray
Nottingham Trent new housing project Trent Basin went for tender for a battery that would guarantee an output of 1MWh after 10 years of use. They are installing a 2.1MWh Tesla battery. Food for thought

Loic Jacob @lfmcjacob
Smart sensing with… Pigeons? Turns out you can learn a lot from them. Lee Chapman from @unibirmingham. @arbnco @CIBSE #Build2Perform

Ben Virgo @virgoben
It’s not ‘leaves on the line’ it’s moisture from the leaves… oh, that makes a bit more sense @CIBSE #build2performw

By deploying a high resolution sensor network, the project has helped unearth the impact of temperature on electricity transformers. ‘Once temperatures reach 6oC above their operating temperature of 98oC, their life expectancy halves. So we know they will need replacing by 2050.’ Its Wintersense project measures road surface temperatures for gritting applications, and its Summersense project uses infrared sensors to investigate ways to reduce heat-related railroad buckling.

Its next project – CityFlocks – will involve strapping lightweight sensors to pigeons’ backs to understand the 3D nature of UHI. ‘If we understand how heat behaves, we can get insights into things like pollution,’ he said. 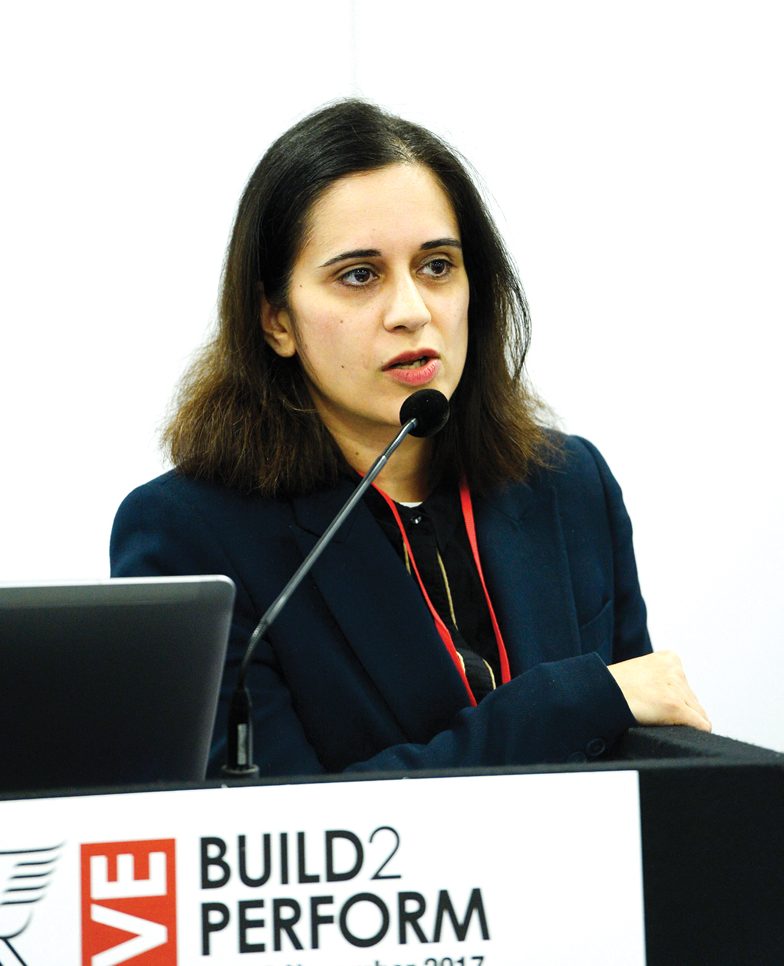 In one of its projects, the IEA has used satellite data to produce solar maps of the Seychelles – studying incoming radiation levels and the impact of clouds – for the Public Utilities Corporation and the government to make better investment in renewable technologies. ‘The tool explores data and allows the users to run their own scenarios to see how a different mix of technologies at different sites would help them address the energy challenge of the future,’ Clifford said.

‘Cities face a lot of environmental challenges in the future, so they need to consider how adapted they are to mitigate them,’ she said.