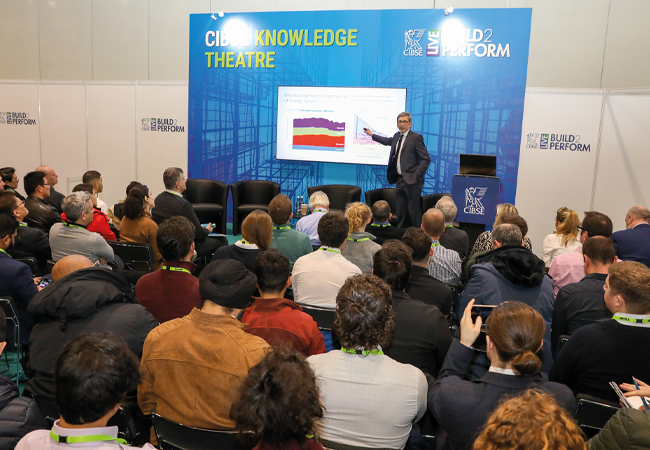 The first Build2Perform Live event for three years focused on two areas that will change forever how building services engineers design and deliver buildings: the elimination of carbon and the guarantee of safety.

Held at ExCeL London for the first time, the event attracted 80 speakers and 60 exhibitors, and offered 45 hours of CPD and other technical presentations. Nearly 3,000 people registered over the two days.

CIBSE President Kevin Mitchell opened Build2Perform and said CIBSE was ‘leading by action and not just words’ to deliver the changes required by the Building Safety Act.

Speakers from government and the new Building Safety Regulator explained how the regime described in the Building Safety Act would affect everyone in the construction and management of buildings. HM inspector of health and safety Neil Hope-Collins said there would be severe consequences for individuals and companies that ignored the new regime. ‘Non-compliant building works could result in unlimited fines and up to two years in prison,’ he warned. 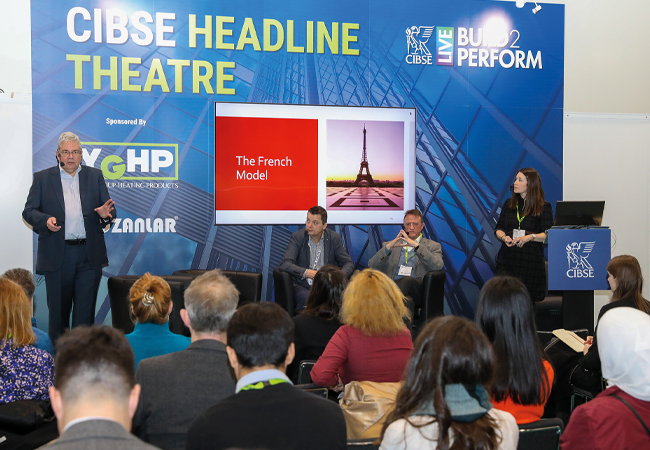 The cross-industry quest to define net zero through the Net Zero Carbon Buildings Standard (NZCBS) kickstarted the conference programme. Other related sessions tackled the decarbonisation of heat, the transition from gas boilers to heat pumps, and the challenge of measuring embodied carbon.

CIBSE’s groups, societies and regions made substantial contributions, and held seminars on the new Code for Lighting, TM65 and TM66 embodied energy guides, and heat pump guidance. The Society of Digital Engineering hosted the Digital Engineering Awards and led sessions on the key issue of information management around fire safety.

As designers, there is an opportunity to deliver efficient, low carbon buildings that don’t break the budget

The NZCBS will set limits for operational and embodied carbon in new and retrofitted buildings, after assessing what reduction in emissions is needed, across 14 building sectors, for the industry to contribute adequately to the UK’s carbon reductions. ‘The standard will be the single point of truth and will help avoid greenwashing,’ said IStructE’s Patrick Hayes. ‘It will facilitate good design and it will target carbon reduction through the RIBA stages.’

In a call for evidence extended to January, the group requested operational and embodied data to help create benchmarks and understand what limits and targets should be set for different building types. CIBSE’s head of sustainability, Julie Godefroy, said the NZCBS invited modellers to work with them from January, on energy performance models.

The future of heat

Delegates heard about the challenges of meeting consumption peaks, storing energy, and ensuring flexibility in the system. Tadj Oreszczyn, professor of energy and environment, University College London, said that gas must disappear, to be replaced by heat pumps and district heating, to reach net zero. However, heat pump deployment is difficult with current gas to electricity prices, he said, adding: ‘We must prepare for price and security instability.’

Oreszczyn discussed the viability of a slow transition, with gas and heat pump hybrids. ‘These could replace technology without big changes and reduce emissions in the short term. It’s a difficult balance; we don’t have long to evaluate our options.’

Ted Pilbeam, building services and sustainability director at VolkerFitzpatrick, argued that we should not discount other technologies. ‘I’d like to see a lot more research on hydrogen – even if it doesn’t work, at least we will learn.’ 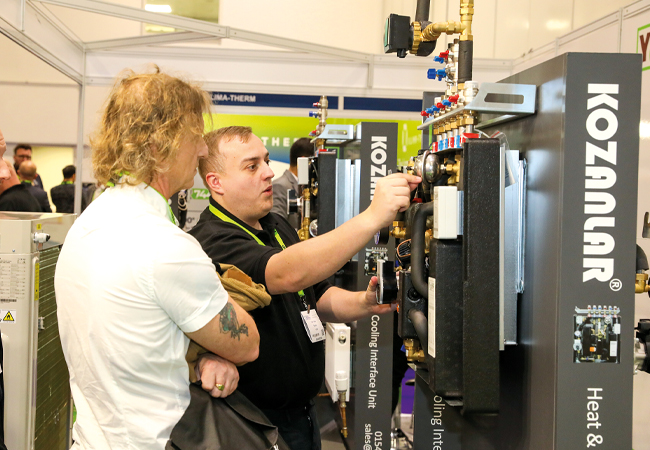 Concern over affordability of all-electric solutions was aired by the audience. ‘We’d have to replace pipes with cables, which would be incredibly expensive.’ Further, it was asked: ‘Will the Grid be able to cope?’

‘The debate between hydrogen and electricity is a sensitive one,’ said Oreszczyn. ‘Hydrogen has advantages, but it’s going to be a while before this can be widely deployed. There are equal infrastructure problems with hydrogen and heat pumps. The problem with a combined approach is having to deal with two sets of infrastructure.’

The challenges of moving to all-electric buildings are highlighted in TM67: Electrification of buildings for net zero. Chair of the CIBSE Technology Committee Katie Clemence-Jackson facilitated a panel featuring two members of the TM67 working group, chair Tony Day and Chris Twinn.

The falling carbon intensity of electricity compared with gas was the main reason for the growth of heat pumps, said Day, with it predicted to be zero by 2032. However, he added that there is a huge shortfall in electrical capacity on the Grid. During the ‘Beast from the East’ in 2018, the amount of energy the gas grid drew instantaneously was 200GW at peak, whereas the peak of the electricity grid is only about 50GW. ‘If we transferred all of that gas energy onto the electrical network, the supply system couldn’t cope. Even with good COPs, it will double demand on the electricity network,’ Day said.

A fabric-first approach would be essential to minimise loads, he added, but electrical demand could be managed with intelligent design and smart networks, and energy storage would form part of the solution. Day questioned who would pay for the upgrading of the Grid, and said developers and distribution network operators would have to form a dynamic relationship to ensure electrical requirements were met. 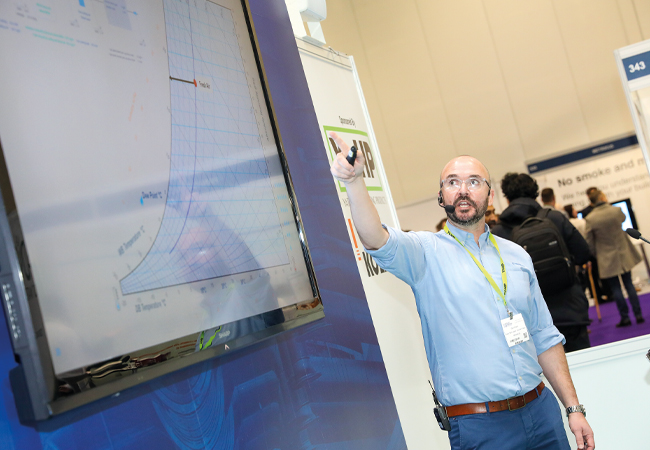 Clemence-Jackson said heat pumps are in danger of being more expensive than gas systems with the current cost difference between gas and electricity. ‘We have to make sure we’re not making heating more unaffordable,’ she said. ‘As designers, there is an opportunity to deliver efficient, low carbon buildings that don’t break the budget and match the supply of electricity to demand.’

With gas currently at 10.3p/kWh and electricity 34p/kWh, Twinn pointed out that heat pumps will have to have a COP of at least three all year around to make them cheaper than gas boilers. Existing stock will be the most difficult to decarbonise, he added, and clients are deterred by the cost of heat pumps and the upgrades of emitters and fabric required to run lower-temperature systems.

Twinn described a cost ‘sweet point’, where just enough fabric improvements are carried out to allow existing emitters to operate at the lower temperatures produced by heat pumps. ‘It then becomes a step-by-step approach, he said. ‘Nine times out of 10 the client doesn’t have enough money for all of this. But at least the fabric-first approach reduces the bills in the short run, and a heat pump can be added in the future.’ CIBSE has published two technical guides on the life-cycle of heat pumps, from design to decommissioning. AM16 covers multi-unit residential buildings and AM17 large non-domestic buildings.

Joshua Bird, lead, building services, at Arup, highlighted the consequences of annual refrigerant leakage on whole life carbon assessments. ‘Emissions associated with leakage may equal the savings made with a heat pump,’ he said. ‘If you’re using a high GWP (global warming potential) refrigerant, leakage rates will have a huge impact.’ 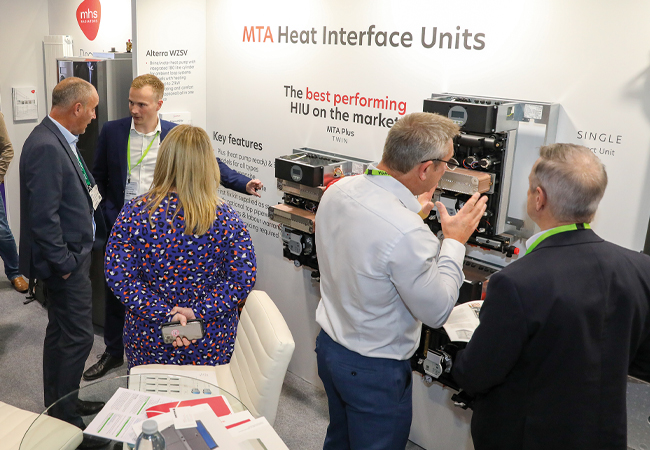 In a session on embodied carbon, Clara Bagenal George, associate at Elementa Consulting, explained how CIBSE’s TM65 calculation methodology fills a void for construction materials because environmental product declarations showing embodied energy in components are rare. Elementa’s Will Bury gave a detailed explanation of how the calculation tools could be adopted for use outside of the UK, and stressed the importance of ‘making sure that everyone is consistent with the methodology’.

In 2023, CIBSE will release TM65.2 for offices, and a carbon database for MEP Understanding mental health in the built environment, CIOB, 2020 components is in development. Hugh Dugdale, associate principal at Elementa Consulting, said: ‘It will be the first port of call for design teams to look up product values to use in early calculations.’ 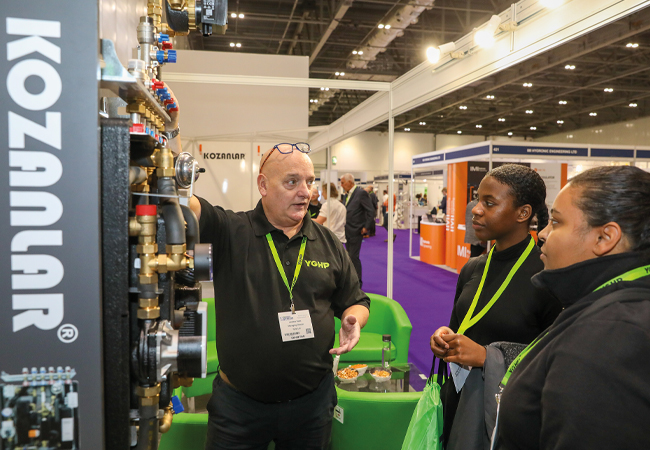 CIBSE’s TM66 Creating a circular economy in the lighting industry was discussed in a session led by lead authors Bob Bohannon FSLL, head of policy and academy at the Lighting Industry Association, and Kristina Allison MSLL MCIBSE, senior lighting designer at Atkins, and vice-president of the Society of Light & Lighting and chair of the society’s Education Committee.

Bohannon said TM66 is designed to help make a business case for going circular, and he described the Circular Economy Assessment Method, which gives lighting products a score from 0-4 based on the circularity of four elements: product design; manufacturing; materials; and eco-system.

Minimising the risk of damaging heritage properties with inappropriate retrofits was the subject of a debate led by CIBSE’s Retrofit in Heritage Committee. There are an estimated 500,000 buildings in the UK that require retrofitting, and the panel debated the need for relevant accreditation schemes and discussed the balance between making carbon savings and conserving a building’s heritage.

RMJM London’s Bill Bordass said he was dubious about the mechanics of an accreditation scheme. ‘I have seen many rookie fixes from qualified engineers,’ he said. ‘The sensitivity needed when dealing with heritage buildings can’t necessarily be taught.’

James McCosh, partner, van Heyningen and Haward Architects, also questioned how helpful a scheme would be: ‘Certification isn’t a magical cure – I’ve seen the cost and time that accreditation takes in our business; we can still do good work without it.’

However, Morwenna Slade, head of historic building climate change adaptation at Historic England, disagreed. ‘Without an accreditation scheme, how can you ensure engineers are competent? Certification will demonstrate the job can be done well,’ she argued.

Bordass said that traditional buildings are sustainable because they have lasted, and added: ‘We don’t want people who don’t know how to design new buildings to work properly to be unleashed on old buildings.’

Slade agreed, and said that creating solutions with incomplete knowledge may lead to incorrect measures.

Ann-Marie Fallon, associate director at Architype, warned that heritage buildings could become ghost establishments in the wake of the current energy crisis.

‘Use is key to sustainability,’ she said. ‘If buildings are retrofitted, we need to ensure they continue to be used.’

A host of guides and application manuals will be released by CIBSE next year, and the Journal will have a regular round-up of key documents. CIBSE Members can access these at www.cibse.org/knowledge-research.