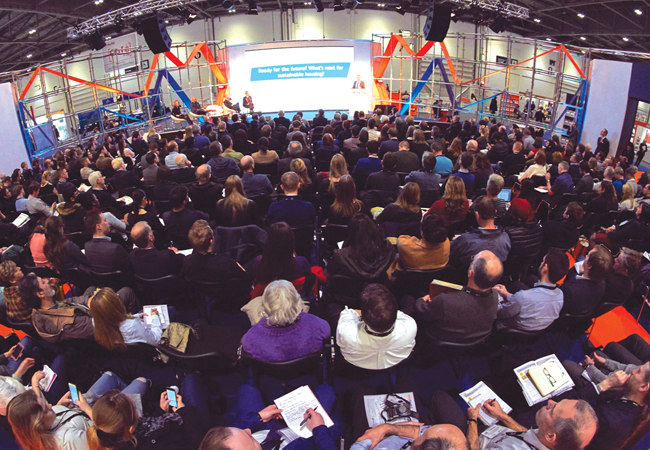 A sense of urgency was apparent in the auditoriums of the Ecobuild conference and exhibition this year. Speakers demanded that delegates do more to reduce the environmental impact of buildings, and called on them to make the most of the growing public clamour for healthier buildings and better air quality.

As well as describing new standards designed to improve building performance – and the technology innovations that would help industry cut carbon and make buildings healthier – speakers weren’t afraid to speak out against what wasn’t working in the design, construction and operation of buildings.

As a major contributor to greenhouse gas emissions, the built environment poses a threat to the UK meeting its carbon reduction targets for 2020 and 2050, said Patrick Brown, assistant director of the British Property Federation, in a session on Minimum Energy Efficiency Standards (MEES). 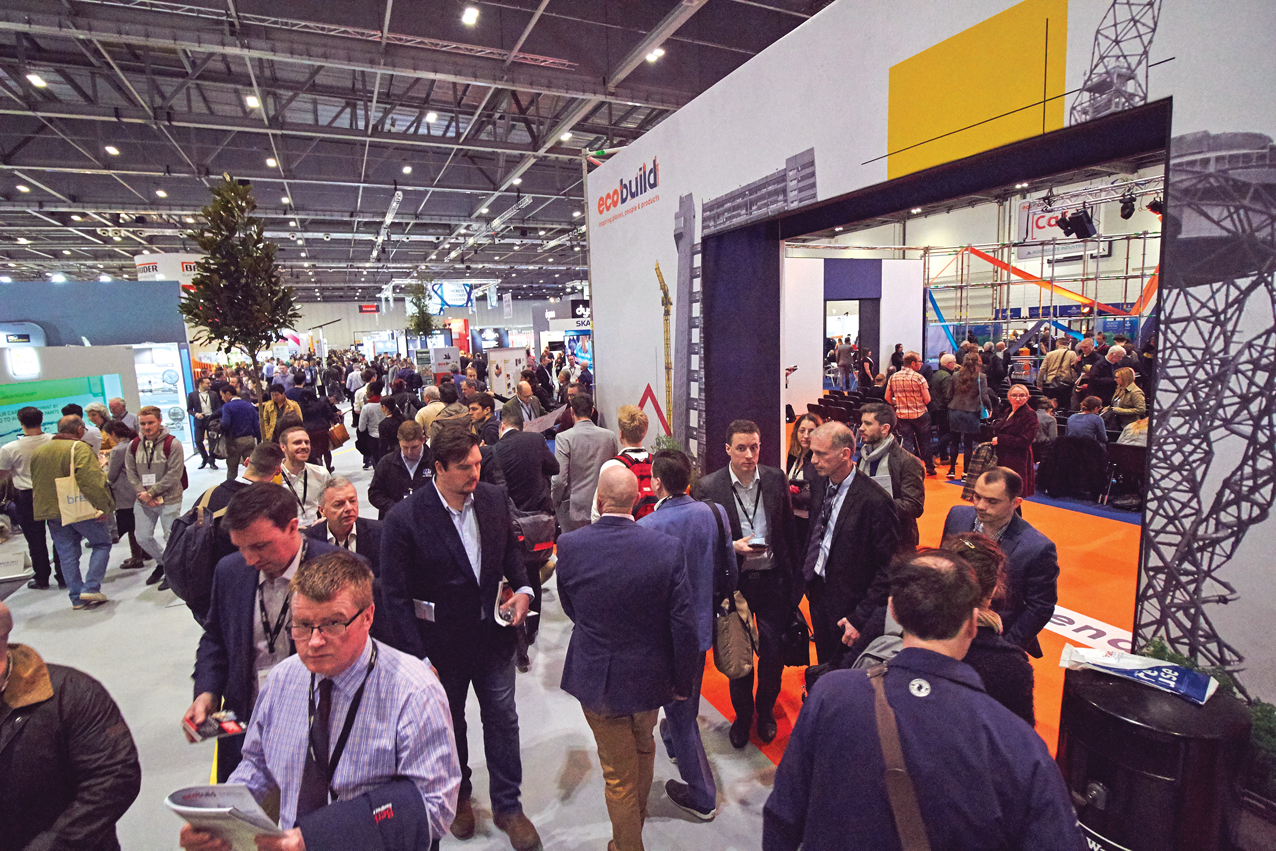 He said properties built in the 19th and 20th centuries have left a legacy of stock that is not being replaced fast enough.

MEES – a provision under the Energy Act – require all tenanted commercial buildings to be rated E or above by 2018 for new lettings, and by 2023 for all lettings. ‘The best way to bring the landlord on board is to interrupt their income stream,’ said Brown.

Peter Williams, a professional support lawyer at Shoosmiths, said potential barriers to undertaking energy efficiency works include the inability to obtain planning – or the tenant’s – consent, or the possibility that works may devalue or damage the property.

In the same session, on improving energy efficiency in non-domestic buildings, Debbie Hobbs, head of sustainability at Legal & General, voiced her frustration at not being able to control energy efficiency in her portfolio. She blamed the complex supply chains, which don’t always have the skillsets to maintain buildings properly. ‘In the UK, we have lost the engineering skills to operate our buildings,’ said Hobbs, who remarked that people who operated buildings had to be involved in the handover.

Guaranteeing energy performance of new homes was high on the Ecobuild agenda. Property and construction professionals introduced a pilot scheme to develop an innovative insurance product that will underpin an energy-performance warranty. Lynne Sullivan, Good Home Alliance chair, said the insurance-backed warranty will create a commercial incentive to design, build and operate houses that perform as intended. Peter Mayer, BLP research and development manager, said a customer – be they a developer, social landlord or the private rented sector – could potentially claim through the ILife insurance policy if a new house uses more energy than expected. If a deficiency in the building’s façade or services is proven, the claim would be accepted and the issue rectified. Mayer said, for the insurance to work, they would have to balance the income from premiums against the cost of claims. ‘The premiums of many would pay for the claims of the few. But premiums would need to be low enough to be affordable,’ he said.

Determining the validity of a claim would be a tough job that would require a year’s worth of energy data, added Mayer. He said energy use would have to be investigated to determine whether the façade, the services or the user was at fault.

One innovative housing project discussed was the Dutch retrofit system Energiesprong, which offers a 30-year performance guarantee. Ron van Erck, head of international market development, announced that up to six UK housing associations had signed up to 100 retrofits using the technology. These include between 10 and 12 in London. Emily Brahan, head of sustainability at Nottingham Energy, discussed the challenges of procuring an Energiesprong project of nine homes in the city, including persuading occupiers that the makeover would save them money. 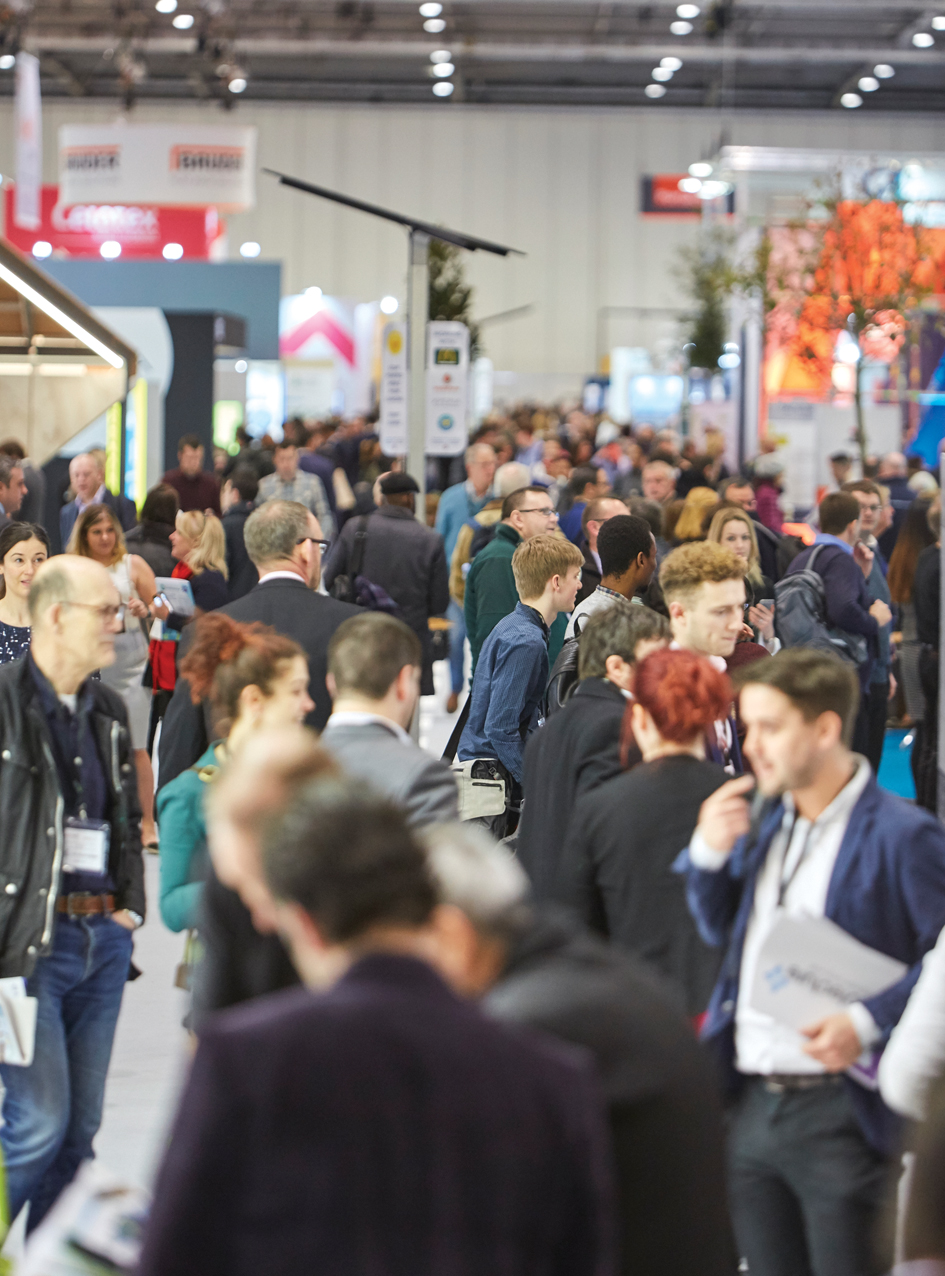 Building information modelling (BIM) was in the spotlight on the last day of Ecobuild. Paul Oakley, director at BRE, said BIM had three different meanings: the model; the process of modelling; and building information management. ‘The latter is the requirement stipulated in BIM Level 2 – the thing that’s produced, how it’s produced and the who, what and when of production.’

Dan Rossiter, senior BIM communicator at BRE, documented how he took the process one step further than most – by applying it to his own home in South Wales.

‘The idea was to show I could produce BIM Level 2 deliverables, but also to use the graphical models and non-graphical data to help manage my home in a more efficient way, as well as to inform retrofit works,’ said Rossiter, who documented his journey on his ‘There’s no BIM like home’ blog, available at BIMblog.house

‘If I want external insulation or triple glazing, I can use the cost analysis and test it with my model, to see what gives the best cost-and-return ratio. If I needed to replace a window, I could check its size, finish and basic performance information to make sure it was replaced with a suitable alternative. Gas and electric safety test data documents could be embedded into the circuit/piping models respectively, and each item of equipment can include its product information.’

Phil Palmer, virtual construction manager at BAM, explained how BIM was employed during operation at Wharfedale Hospital, Leeds. He said retrospective BIM was used to develop an operational 3D facilities management (FM) model, containing the 4,000 assets that require servicing and maintenance in the 76-bed, 9,600m2 hospital.

Using the hospital asset model, technicians carry out regular equipment checks by scanning equipment’s quick response (QR) codes to receive the latest information on that unit, including the date of the last inspection, issues identified and when the next check is due. 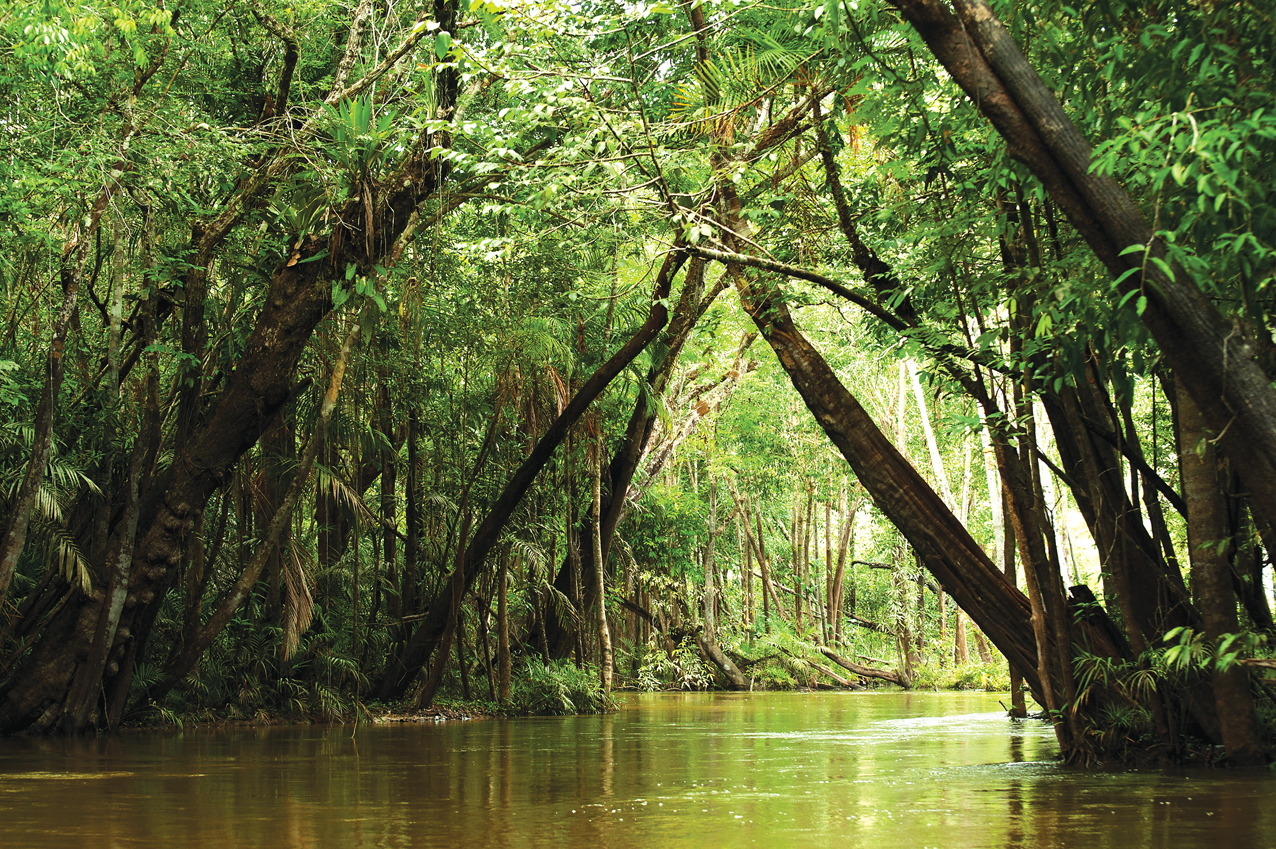 The resilience of cities was another major theme at the three-day event.

At the City Hall stage, in a session on building resilient communities, architect Julie Futcher said the urban form can either maximise or minimise the effect of the climate. So planners need to consider how buildings interrelate, and the effect they can have on wind speed, air temperature, pollution and chill factor.

Professor Derek Clements-Croome, of the University of Reading, called for an urban well standard – similar to the Well Building Standard – with health, happiness and flourish indicators. ‘Biophilic design should be emotional to improve the quality of life; technology alone is not enough.’

In an ecosystem, he said, everything is designed around water, which is released only when the forest cannot hold onto it any longer. In a city, this can be recreated with capillary drainage and irrigation architecture, which stores rainwater and reuses it to irrigate plants and flush toilets.

Palmer said that the FM team is now able to carry out 60 room surveys in two hours – which is 33% quicker than when using the manual system – and gives the team a five-year maintenance plan.

Dr Maria Spyrou, energy efficiency programme manager at M&S, explained how demand side response (DSR) is helping support the grid at peak demand times. It is also a way of saving money through cost-avoidance schemes, and a way of making money through balancing services schemes. Spyrou said M&S entered a distribution use of system (DUoS) scheme – which allows load shedding at peak periods – five years ago. The retailer has also upgraded 16 onsite diesel generators, 12 of which have been approved for triad avoidance – by which businesses can reduce load and increase generation when national demand is at its highest. It is now looking at frequency response, which requires an asset to be switched on within 30 seconds. 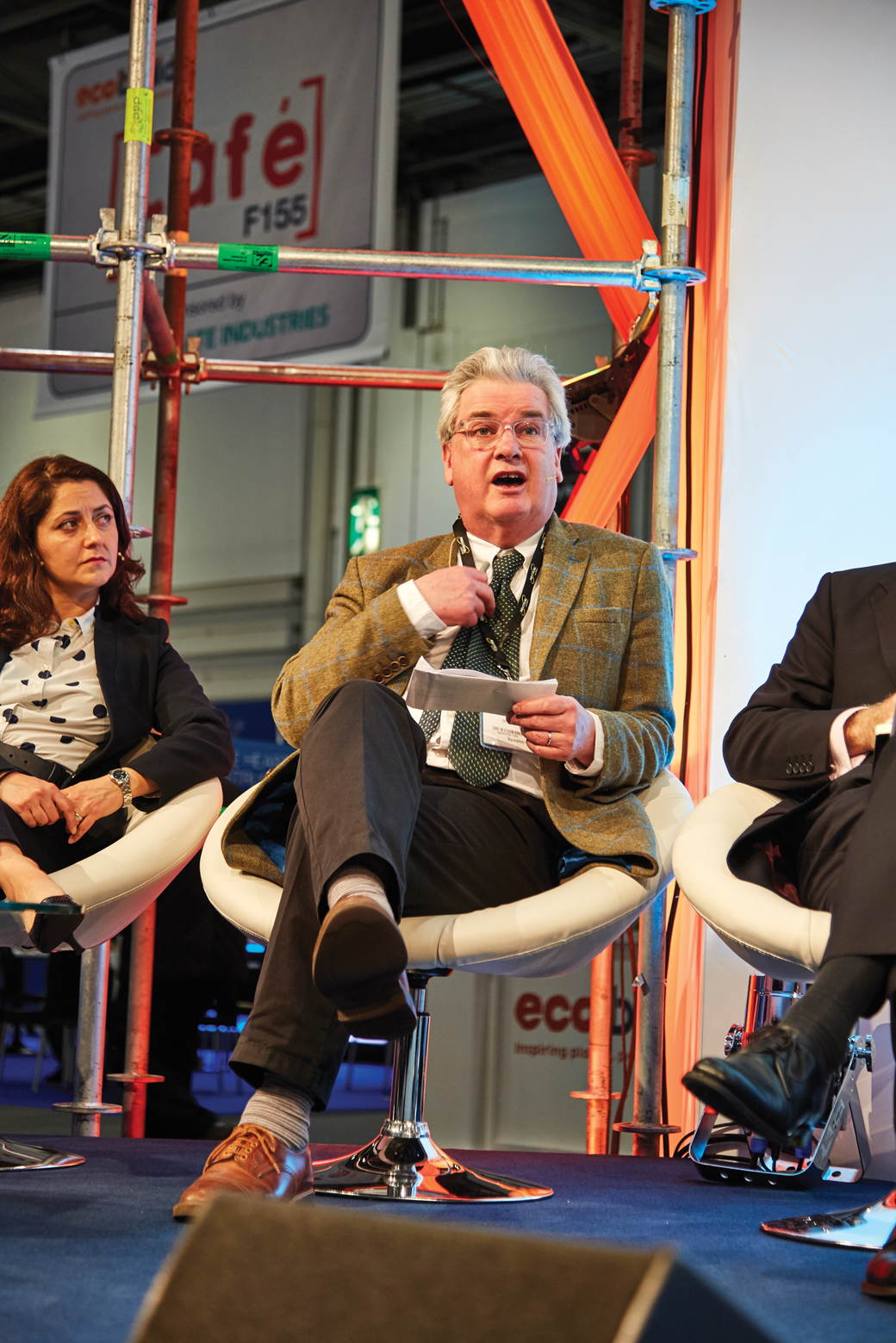 The fact that carbon energy accounting methodologies use static emissions factors is a drawback to DSR, said Barny Evans, of WSP. ‘Between 4am and 5am – the best time to charge the battery or put the washing machine on – we are not using fewer kilowatt-hours, but better kilowatt-hours. At the moment, carbon calculation methodologies do not allow for that. Energy storage will show as carbon increase, when it’s actually a carbon benefit,’ he said.

One strong theme at this year’s Ecobuild was health and wellbeing.  Dr Gavin Dunn, director of Building Performance at BRE, explained how its agreement with the International Well Building Institute meant a Well certificate would be accepted as evidence for Breeam points.

SLL president and associate director at Arup Jeff Shaw hosted a packed auditorium at a seminar on light, circadian rhythms and wellbeing. Dr Debra J Skeen, of the University of Surrey, referred to a study of 166 seven- to 16-year-olds, which revealed that lighting rooms in tune with circadian rhythms increased alertness by 70% over a year. She said older people benefited most from good lighting, and cited a German study that showed falls per month in a home reduced from 14-18 to between two and four after new lighting was installed in the corridors.

With the change in politics in America and the UK, there was a feeling that industry should not wait for governments to initiate change. This was evident in a discussion hosted by the World Green Building Council, which – despite the USA’s potential exit from the climate-change agenda – was confident that its target of making all buildings net-zero carbon by 2050 was possible.

Anita Mitchell, head of sustainability at Lendlease European gave grounds for confidence with a case study on the Barangaroo development in Sydney, which she claimed was the first net-zero, mixed-use development in Australia.  Lendlease has a large presence in the UK has been recommended as the partner of a £2bn regeneration scheme in Haringey – it will be interesting to see if it achieves net-zero carbon buildings here.