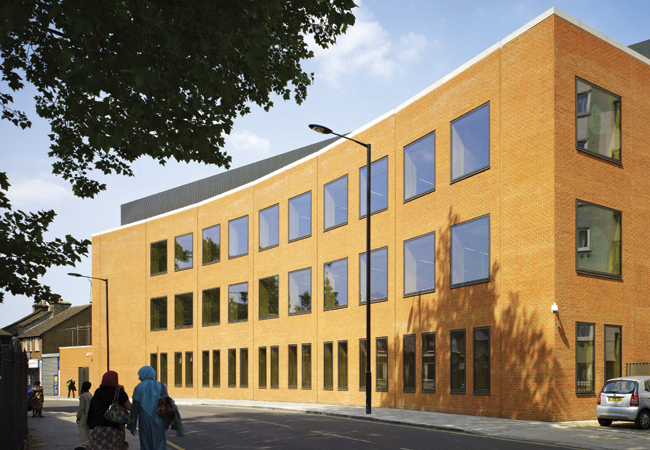 The University of East London’s brief to Hopkins Architects and services consultant Aecom was clear: design a new library for its Stratford campus that would meet its exacting sustainability agenda and extremely low operational energy targets.

Book your place now for the CIBSE building performance awards 2016, taking place on 24 February, and see who takes home the awards
Visit www.cibse.org/bpa

Its brief set an annual energy target of 100kWh/m2 for both regulated and unregulated energy consumption, including small power and IT systems, for the new three-storey building. ‘It was quite a tight target for a library open 24-seven,’ says Sara Kassam, CIBSE’s head of sustainability development, who – at the time – was UEL’s sustainability manager and one of the team responsible for setting the energy standards that were integral to this challenging brief.

To put the target into context: the Elizabeth Fry Building, widely recognised as one of the most energy efficient university buildings in the UK, has an annual energy use of 98.8kWh/m2 based on a daytime, weekday occupancy. ‘The building we set out to design was effectively operating three times longer than the building we were trying to match it against,’ says Martin McLaughlin, a regional director at Aecom.

Aecom’s solution for the £8.6m scheme has been to develop a demand-led building services design, which – according to McLaughlin – means energy-consuming plant ‘is only ever on when it is needed’. It is a solution that is starting to reap rewards; the building is still undergoing intensive fine-tuning as part of its soft landings programme but currently its annual energy consumption is 164kWh/m2.

The design team’s efforts were recognised at this year’s CIBSE Building Performance Awards, where the scheme won the New Build Project of the Year (for schemes with a value of up to £10m) category. The judges described the scheme as ‘A fantastic achievement for a very complicated project with clear and ambitious targets’. 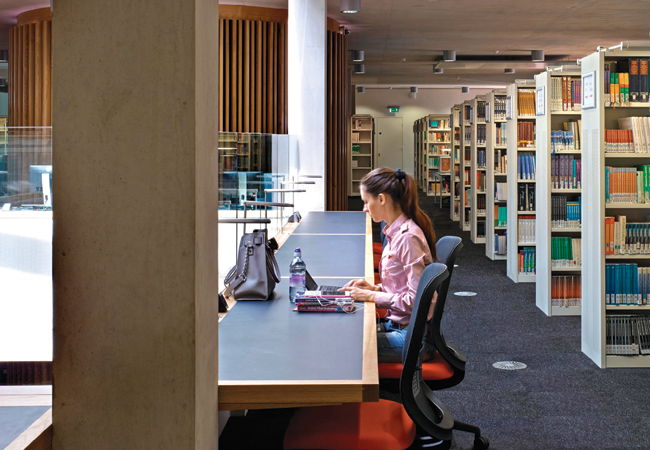 The starting point in the development of the low energy design for the 4,200m2 library was in gaining an understanding of how the new building was likely to be used at different times of the day throughout a year. ‘Having an in-use energy target meant that we had to understand occupational use,’ explains McLaughlin.

Fortunately the university had occupancy data for the campus’s current library. This showed, as expected, that the number of students using the library dropped significantly overnight, but that there were still sufficient students present and equipment operating to create a small services demand.

‘The risk with this is that if you put up a simple building that operates with simple controls, there is a danger that all the lights will be switched on and all the plant will run,’ McLaughlin says. ‘Developing a demand-based solution meant that actual operational loads could be minimised by operating plant only when it is needed’.

A demand-led displacement ventilation system keeps the building supplied with fresh air through an underfloor variable air volume (VAV) system. To ensure the system can cope with occupancy levels, which vary from several hundred during the day to as few as 15 insomniacs dotted about the three-storey library at night, the floor plates have been sub-divided into 6m by 6m ventilation cells. 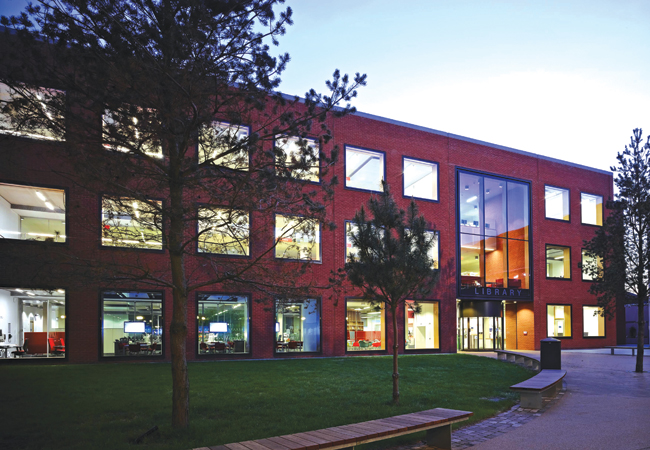 Each cell has its own VAV box, complete with temperature and carbon dioxide sensors to control the quantity of fresh air supplied to the cell. ‘This system ensures that at night, ventilation to each cell can be shut off unless the controls say it is needed,’ explains McLaughlin. Cooling, for example will only be provided to a particular zone when it is occupied and when its temperature rises above the set-point.

Aecom’s solution has been to develop a demand-led building services design, so energy-consuming plant is only ever on when needed

The AHUs have been selected to minimise energy consumption. ‘We opted for a bigger air handling box to keep air speeds and specific fan powers low, which is important for a fan that will operate 24-seven,’ says McLaughlin. In addition to their generous dimensions, each AHU is fitted with a mixing box controlled by a CO2 sensor to maximise recirculation of treated air and minimise the energy needed for treating fresh air. Heat is also recovered from the exhaust air by a thermal wheel.

‘During the day the library is very heavily occupied so we set the units up with the best possible set-point for energy efficiency, meaning the CO2 level is at the higher end of the acceptable range, but with the option of the university switching to a lower CO2 setting using the building management system, if the library starts to feel stuffy,’ McLaughlin explains. 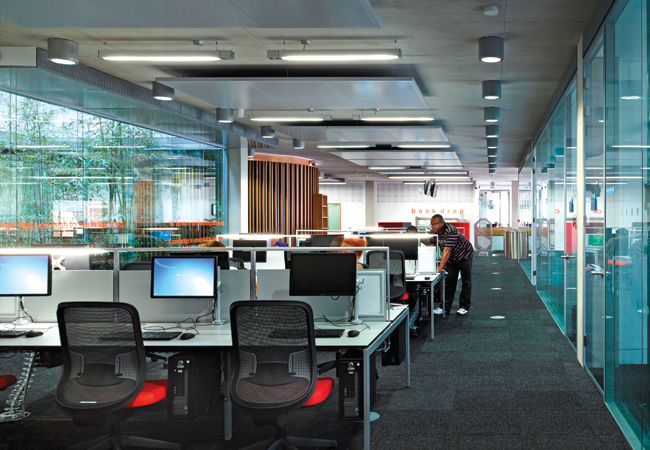 To help keep the building cool, the AHUs incorporate a cooling coil. ‘Because we’re using a displacement ventilation system, it means the chillers can make use of free cooling for the 85% of the year when the outside temperature is below 18°C.’

The design team did look at other cooling options, including an underground thermal labyrinth and a TermoDeck-type solution, where the supply air passes through hollow-core floor planks. These were developed and analysed with a lifecycle costing analysis undertaken to develop the solution. The university’s facilities team involved with system selection as part of the soft landings pre-construction review, dismissed both systems. The TermoDeck solution wasn’t taken forward for energy and flexibility reasons, and the labyrinth solution wasn’t pursued because of both cost and maintenance reasons.

The maintenance team was concerned about keeping the air shaft and labyrinth clean and maintaining good fresh air quality with a low level air intake that would have to be located in the main students courtyard. The designers also looked at natural and stack ventilation-based solutions and a mixed mode option but, after a detailed energy appraisal, the demand controlled solution using big AHUs still proved the most energy efficient option.

To keep plant operation to a minimum, the rectangular building has been designed as a tightly sealed, insulated box. Every element of the building’s fabric has been designed to be more energy efficient than the minimum standards demanded by Part L (see panel ‘Stratford Library fabric U-values’). 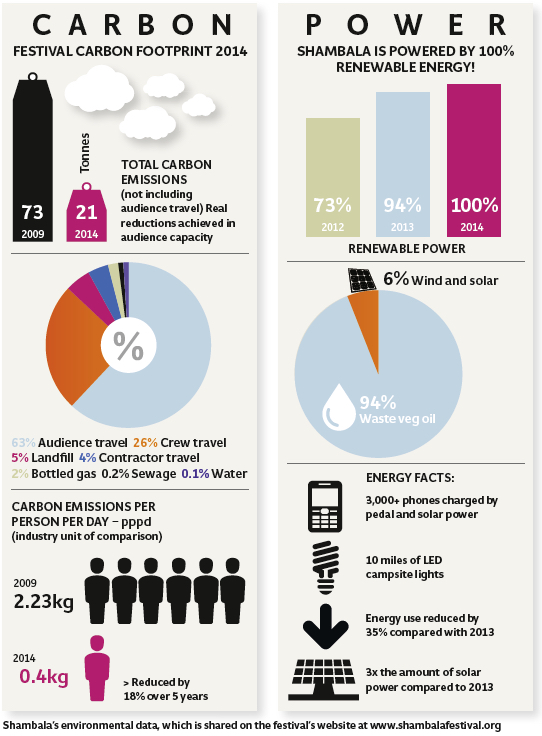 In addition, fabric air leakage was measured at a meagre 2.9m3/hr/m2 at 50Pa (far lower than the 10m3/hr/m2 at 50Pa permitted under Part L of the Building Regulations). ‘Because of the 24-hour operation we don’t have to heat the building quickly, or cool it back down again, because we’ve designed it to be kept at a steady temperature,’ McLaughlin says.

Thermal mass provided by the building’s exposed concrete soffits and reinforced concrete frame help to minimise internal temperature fluctuations further. For most of the year the soffits help moderate temperatures by absorbing heat during the day, when occupancy, solar gains and small power loads are at their peak; this heat is then released back to the space at night, when heat gains and occupancy are reduced.

The only exception to this method of operation is during the summer break, when the library closes at night; the system will then operate on a night-ventilation strategy, purging the concrete of excess heat to recharge the thermal mass.

In winter, two gas-fired condensing boilers provide space heating for when temperatures drop below -1°C. The boilers feed a series of trench heating coils, which have been set into the base of the window reveals. The boilers also supply heat to the hot water system thermal stores through a plate heat exchanger, which helps keep the boiler return water temperature low enough to ensure the boilers run in full condensing mode to maximise their energy efficiency. 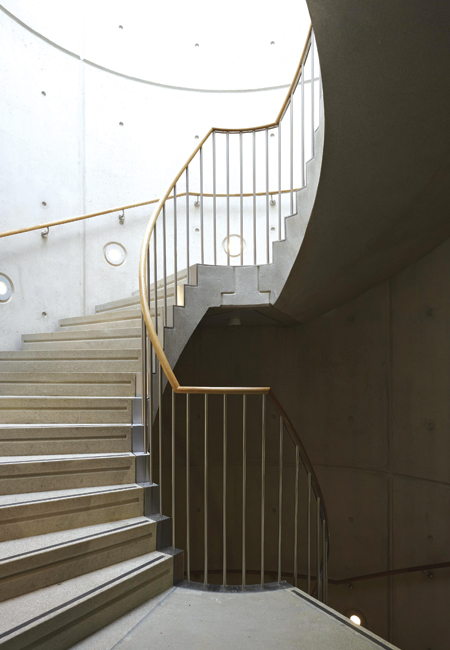 In addition to the design of the heating and ventilation systems, the designers also followed the demand-led approach to reduce lighting and small power loads. ‘When we looked at the initial energy appraisal for the building, a big chunk of energy use sat with small power and lighting,’ says McLaughlin. He said that a mixture of high frequency T5 lighting and LED’s were used throughout the building.

Rather than use high levels of illumination across the floors, the team opted for the lower energy solution of using task lighting focused on the bookshelves and desks, supplemented by minimal background lighting. In keeping with the demand-led approach, all light fittings incorporate presence detectors, while light fittings around the building’s perimeter and atrium additionally incorporate daylight sensors to make the most of natural light.

The building’s electrical supply is supplemented by a 409m2 area of photovoltaic panels covering its roof. These are expected to provide 55,075 kWh/y of electricity, giving a present value payback in the range of 11-16 years. 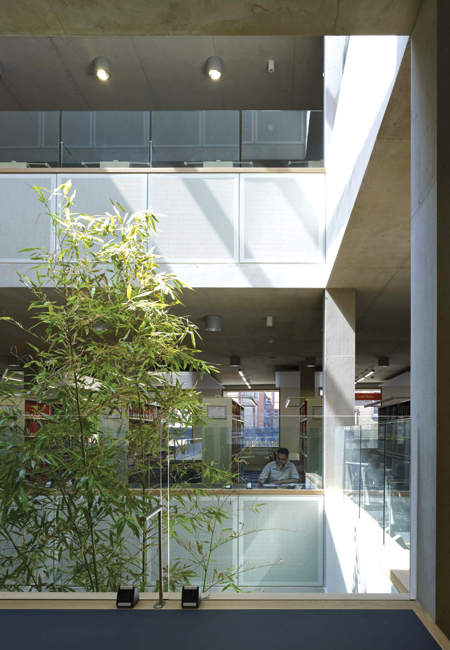 To keep IT power loads to a minimum, the university’s IT team worked hard to incorporate energy saving features into the building’s PCs. In addition, IT server rooms are cooled using outside air blown into the room by a fan. In winter, this warmed air is used to provide additional heating to the library, while in summer it is returned outside. Only when the outside temperature rises above 25°C does a DX cooling system start to operate.

A soft landings engineer (SLE) was engaged during construction and, prior to commissioning, to witness development of the controls and metering strategy. The SLE worked closely with the sub-contractors and project specialists to lead the client training sessions ensuring that, on handover, the UEL team was familiar with the building’s engineering systems.

Following the June 2013 handover, a post-completion soft landings monitoring programme was established to help fine tune the systems and achieve the client’s 100kWh/y/m2 target. When the scheme opened, for the first two weeks engineers were based on site two days a week, and one day a week for the following month to help optimise the systems in operation. After the initial six weeks, the soft landings project was continued with monthly on-site meetings for the remainder of the first year of operation. 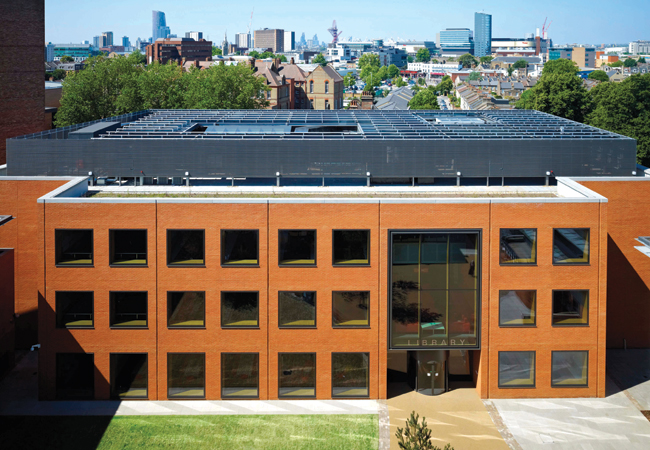 The building's roof-mounted photovoltaic panels are expected to provide 55,075 kWh of electricity per year

The engineers’ continued presence has allowed the design team to adjust the services in response to use and performance. For example, the library’s night time occupancy has been lower than expected, which has allowed the operations team to shut down the building’s top floor at night, saving further energy.

The soft landings team’s job has been even more challenging because of problems with some of the sub-meters, which meant the total energy from the sub-meters failed to equal the total energy consumed on the main meter. ‘We had challenges around sub-metering, which were due to a couple of meters giving incorrect readings,’ explains McLaughlin. This has now been resolved.

The soft landings team also found that the library’s energy consumption was higher than expected. One reason for this was found to have been down to the CO2 set point in one of the VAV boxes having been adjusted from the original position. ‘In future we will strongly advocate that there is a BMS head-end screen that gives a detailed explanation as to why each particular set point is important, what its operating range should be, and the likely impact of adjusting the setting operational energy use,’ McLaughlin says.

Currently the BREEAM Excellent scheme is consuming 164kWh/y/m2. When compared to the original design predictions, actual use has delivered 54% less lighting kWh, 63% less small power kWh, and the server rooms have consumed 80% less energy for both IT and cooling. However,
the mechanical systems are consuming more energy than expected, which will require a further period of controls fine-tuning to match the building’s services to its operation to meet the clients target of 100kWh/y/m2.