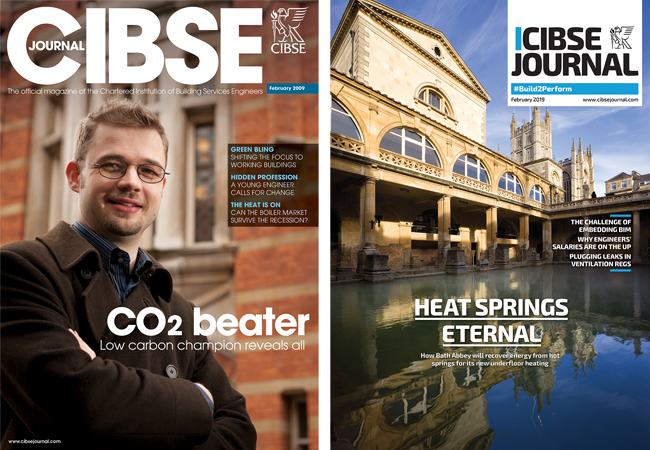 The latest social media sensation is the #10YearChallenge, for which celebrities post ‘compare and contrast’ images from a decade ago and now.

To mark the 10th anniversary of its relaunch issue, CIBSE Journal has gone back to two prominent industry figures who featured in that 2009 edition.

On the cover was Transport for London’s (TfL’s) environmental manager Quinten Babcock, who had just been named CIBSE Champion of Carbon Saving Champions. Inside, Bill Bordass, research and policy adviser for the Usable Buildings Trust, wrote about why buildings in 2009 were failing to meet designers’ goals or users’ expectations.

Ten years on, we wanted to know whether Bordass was more optimistic and whether Babcock still had a champion’s thirst for delivering sustainable buildings. What have they been up to over the past decade, how far have we progressed on sustainability, and what key lessons have they learned in the intervening years. 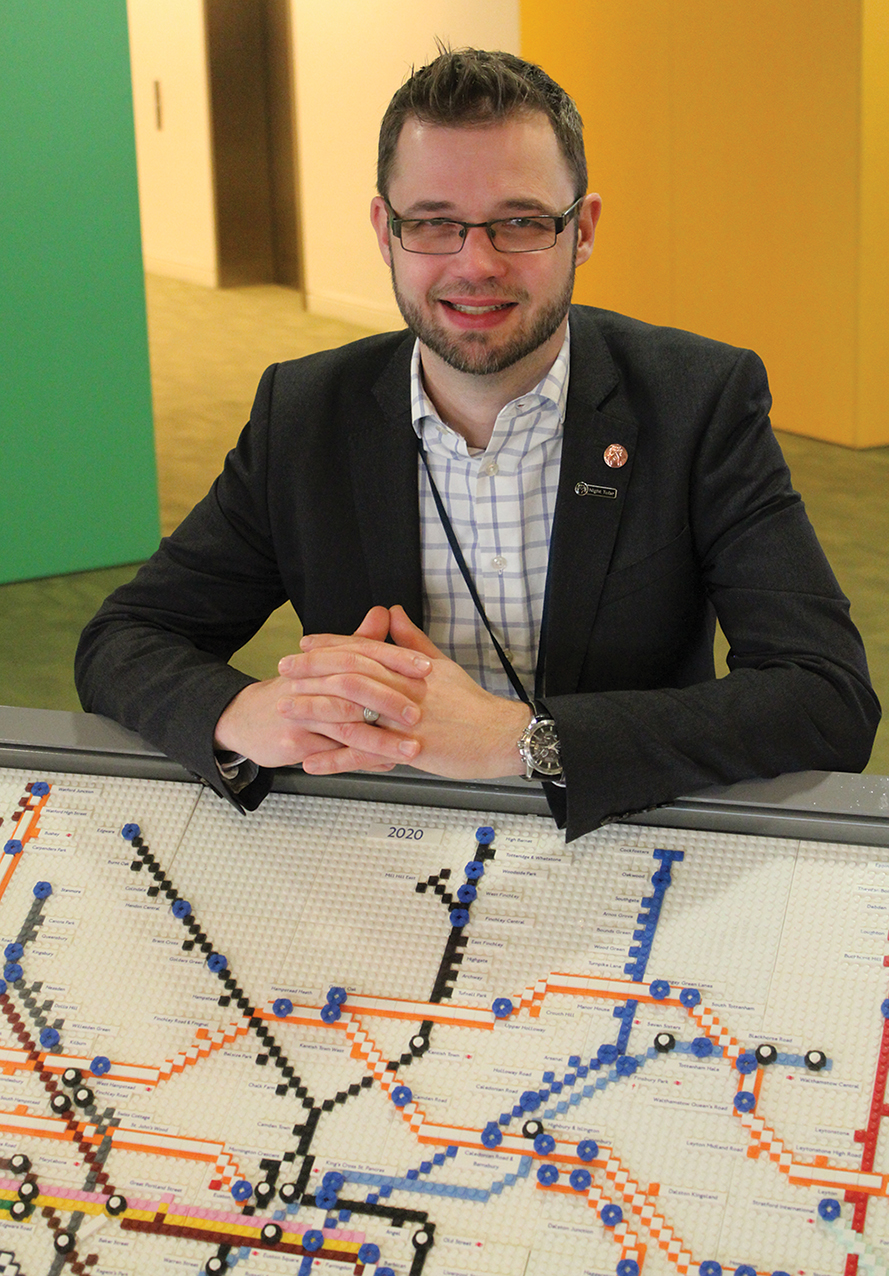 Quinten Babcock at TfL in 2019 and (above) on the Journal cover ten years ago. Credit: Michael Stavri

There have been some big changes in the operational environment at TfL since 2009. The capital’s transport agency is facing a massive shortfall in funding thanks to the withdrawal of government support for operating costs – a cut that has been compounded by London Mayor Sadiq Khan’s commitment not to raise fares.

At the same time, the energy efficiency policy framework in London has become more demanding. While, a decade ago, the Greater London Authority was seeking a 60% reduction in emissions by 2025, Khan wants to make the capital zero carbon by 2050.

‘We have to get leaner. We need to reduce costs rapidly and improve energy efficiency with the drive to zero carbon for London,’ says Babcock, who has spent a big chunk of his time over the past decade fixing Palestra, TfL’s flagship main building on London’s South Bank. The work has saved £426,000 on energy bills in 12 months thanks to a 17% improvement in energy efficiency.

What Babcock describes as the ‘ridiculous’ level of out-of-hours electricity consumption at TfL seems to be as big a headache for him now as it was when he was interviewed in 2009. ‘Half of the electricity supply is consumed after 6pm on weekdays and at weekends,’ he says. ‘We have some out of hours, but lots of people work Monday to Friday, and a lot of kit is left on.’

Ten years ago, Babcock was putting his faith in getting employees to change behaviour, but this has proved to be a ‘massive challenge’. ‘If there is a technical solution,’ he says, ‘we should grab it, as it will be more consistent – because people forget.’ The 43-year old is now working with TfL’s IT teams to automate PC shutdowns out of hours, and with its FM provider to improve use of its HVAC.

On the broader sustainability front, Babcock describes the progress made over the past 10 years as ‘uncertain’. ‘Ten years down the line and the planet is looking even worse,’ he says.

There have been some bright spots, though. Energy Performance Contracts (EnPCs) – which were only being trialled in 2009 – are starting to work. However, Whitehall support for Design for Performance (DfP), which ties developers to actual targets, has been terrible, he says.

Babcock describes central government as the ‘pantomime villain’ of building sustainability, recalling its 11th-hour move to stop display energy certificates (DECs) becoming mandatory for private buildings, even though this was the case in the public sector. While non-domestic building Energy Performance Certificate (EPC) ratings may be necessary, they are ‘not sufficient’ to determine operational energy use.

The industry, however, must take some responsibility for the lack of progress, says Babcock, who identifies two chief problems: the construction design and build process, and a ‘lack of competence’ in the facilities maintenance industry.

So how will the industry achieve its climate targets? Babcock argues for implementing DfP for new builds; motivating the construction and FM industry to achieve better operational energy performance; making EnPCs mandatory for retrofits – and perhaps even for all FM contracts; and requiring the energy usage of all buildings – or, at the very least, those in the non-domestic sector – to be disclosed.

Enforcing DECs for non-domestic buildings – together with some form of mandatory disclosure – could be the mechanism to get the wider industry to take sustainability seriously. ‘There must be a way of getting FMs to buy into operational energy, at least from a HVAC perspective,’ says Babcock. ‘We need to motivate the industry – get people to care.”

If he had been told 10 years ago how little progress would be made on tackling climate change, the building scientist Bill Bordass would have been ‘completely shocked’. The 2009 Copenhagen UN climate change summit – expected to be a breakthrough – was, in Bordass’s words, ‘a fiasco’. It took until Paris 2015 for substantial progress to be made. At the recent follow-up event in Poland, there was more appreciation that urgent action is required: ‘People are realising it is the last-chance saloon: if we don’t get a grip on things well before 2030, it will be far too late.’

In his 2009 article, Bordass said the UK government was ‘committed’ to improving the sustainability of new and existing buildings, but wasn’t going about it effectively: ‘too much rhetoric and not enough action’.

After 10 years, his ‘big disappointment’ is faltering progress on DECs, with government support ‘completely hopeless’. Bordass had been part of a team that had worked hard between 2000 and 2008 to ‘make in-use performance visible and actionable’ by helping to get DECs established in the UK and the EU. He also working with CIBSE to develop the TM47 process and benchmarking system – designed to evolve rapidly with feedback, but completely neglected since publication, because DCLG did not make its database an open, public asset, but outsourced it. 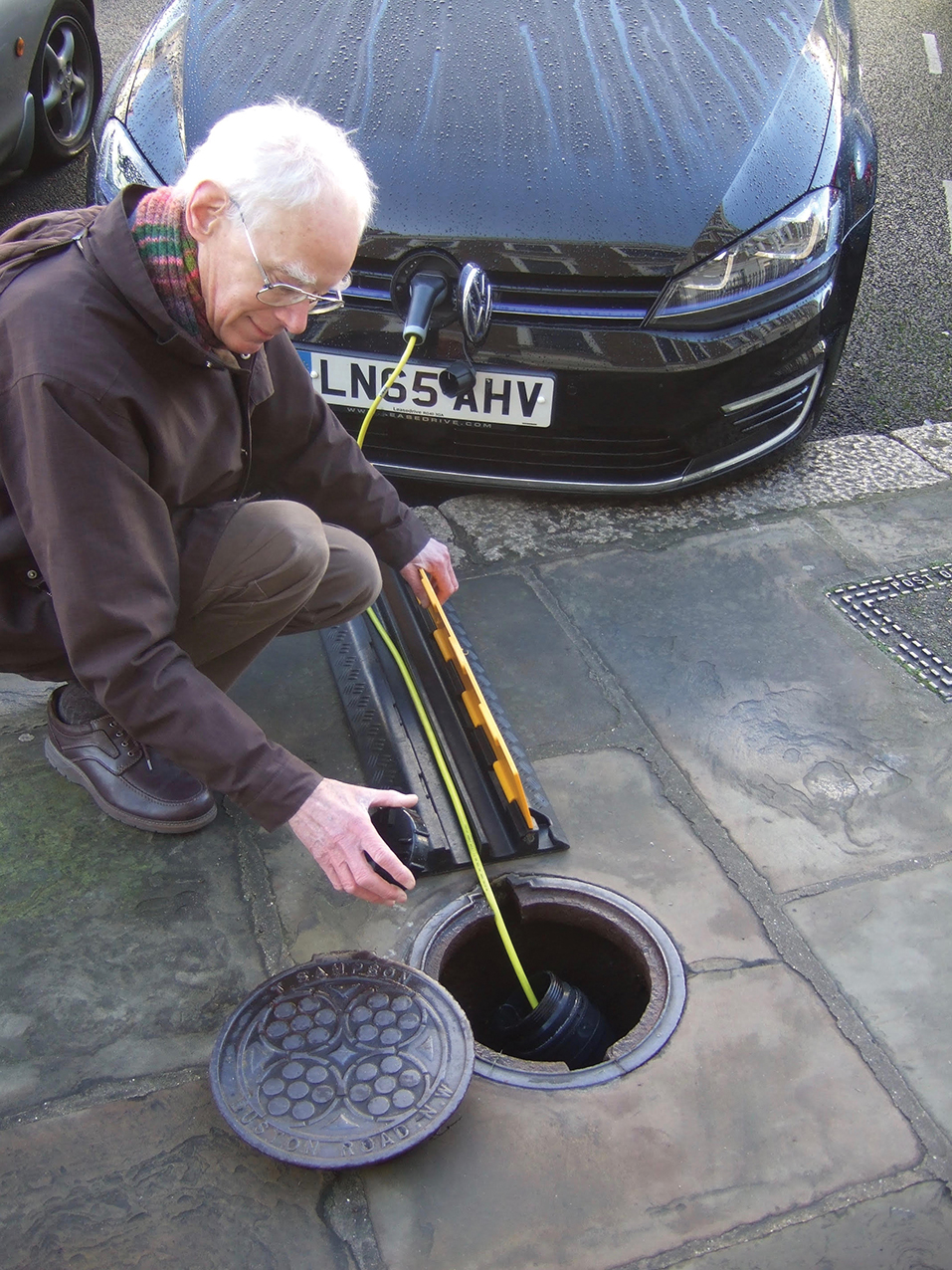 Back to the feature: Bill Bordass in 2019 charging his new hybrid car via his terrace home’s coal hole, and, below, appearing in the first CIBSE Journal 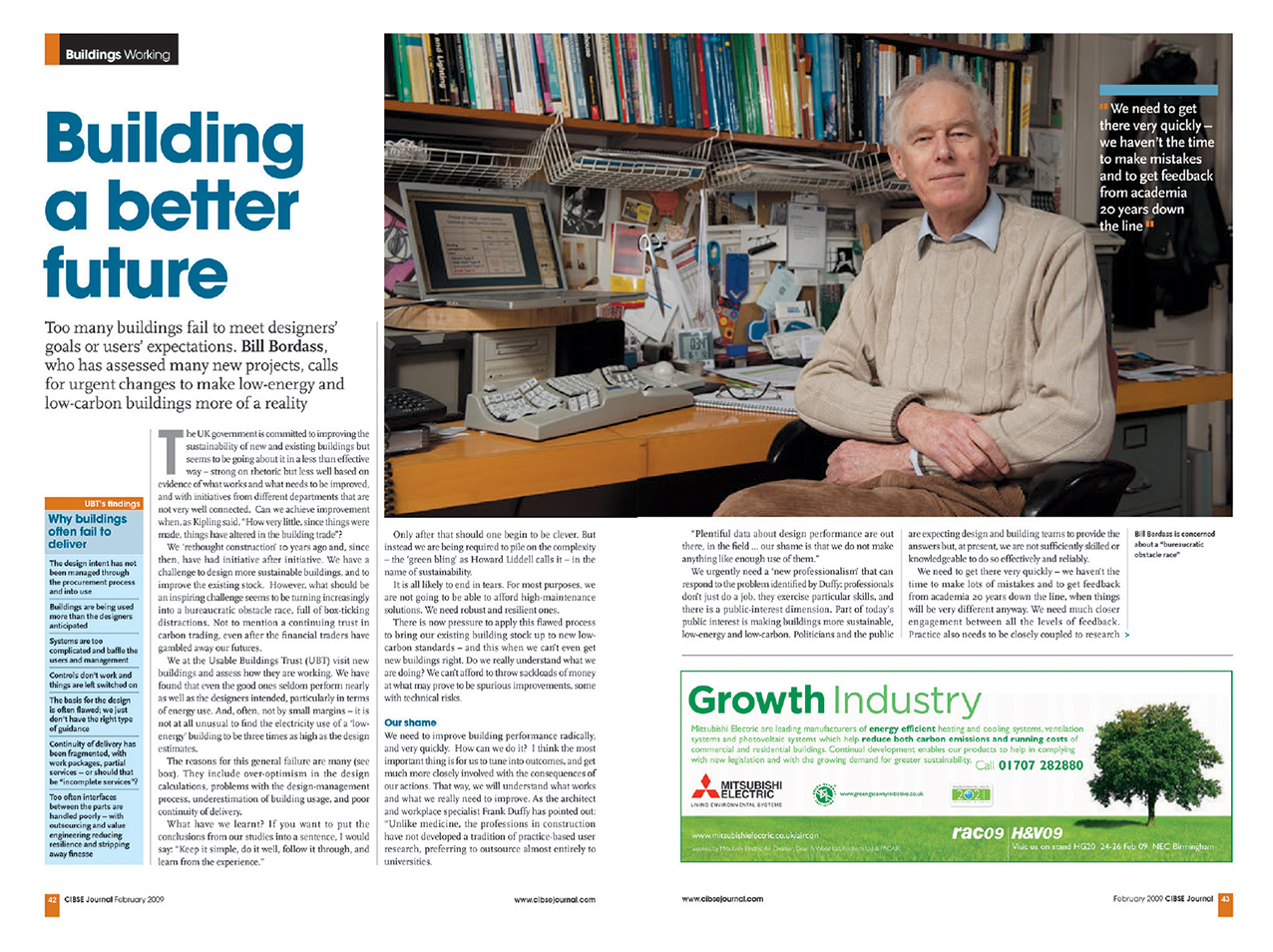 Bordass was also on the UKGBC’s working party that advocated DECs for offices, helping to get them into the draft 2011 Energy Bill. He recalls: ‘We got lots of people on side, including the CBI. However, at the last minute, the government axed this requirement.’

Bordass believes privatisation and outsourcing has led to a ‘terrible loss of institutional and collective memory’ in Whitehall. ‘It makes it difficult to make joined-up decisions; there is no scientific civil service, so policy-making is influenced by external pressures from vested interests and well-meaning but blinkered single-issue lobbyists,’ says the former RMJM building services leader. He likens the government to a drunk looking for a set of lost keys at night. ‘He searches under the lamppost because that is where the light is (but not the keys).’ Bordass is now trying to establish ‘a public interest organisation to help put all this back’.

Nevertheless, Bordass believes good work has been done on laying foundations, for example ‘new professionalism’, a cause he championed 10 years ago in CIBSE Journal. ‘CIBSE’s professional code requires members to promote sustainability, so surely you must understand how your buildings perform: the consequences of your actions. Building professionals should rise to the occasion, not just act in fear of being struck off,’ he says.

‘People will then learn from their mistakes, not keep repeating them, and report and share findings. This feedback will help to make buildings much more efficient – not by adding more kit, but by doing things better, as NABERS has confirmed in Australia. More thought, less kit is more sustainable too.’

Another glimmer of hope is that the performance gap is ‘better appreciated, if still not understood’. At a recent CIBSE event, Bordass was encouraged by the ‘bright young people keen to do things differently’.

Having been ill since 2016, the 75-year-old is now firmly back in the swing, contributing to the debate from his platform at the Usable Buildings Trust charity. He fears humanity has left it too late to stop irreversible climate change, but is determined to do his bit to limit the damage, while also making buildings nicer for people too.

‘Things are improving, but at nothing like the rate they should,’ he warns. ‘In many existing buildings (including new ones,) a tune-up can reduce energy use by typically 20%, with a further 20% from low-cost alterations. How about a “Saving Energy in a Hurry” project to crystallise these quick wins? It would cost less than one Hinckley, save more energy than the whole nuclear programme, and could be on-stream well before Hinckley even started up. Are CIBSE and its members up for it?’