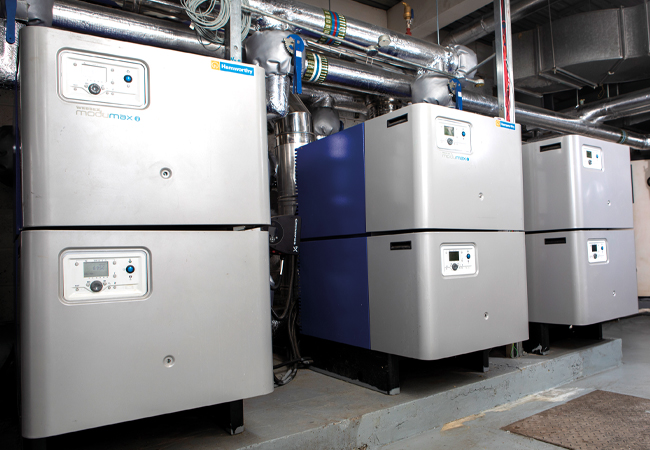 On 15 June 2022, the approved documents (ADs) to the UK Building Regulations for England saw the first significant revisions in almost a decade come into force as a first step along the path towards the UK 2050 net zero target. This CPD will consider elements of Part L of those revised documents focusing on conservation of fuel and power and, specifically, the impact on fossil-fuelled systems to provide domestic hot water (DHW) and space heating in buildings other than dwellings.

The UK Government has a target of net zero emissions by 2050,1 with the interim target to reduce emissions in the UK by 78% by 2035, compared with 1990 levels.2 The UK Government’s Heat and Buildings Strategy3 notes that to meet net zero will require ‘virtually all’ heat in buildings to be decarbonised. The ambition is to gradually move away from burning fossil fuels for heating, while increasing the application of low carbon products, fuels and energy sources that – it is hoped – will be transformed from niche applications to mainstream consumer choices.

The recent changes to the ADs supporting the building regulations for England included reorganisation and revision of AD Part L Conservation of fuel and power, and AD Part F Ventilation, and the introduction of AD Part O Overheating. By adopting the provisions of these ADs, the aim is to reduce the regulated carbon emissions of new non-domestic buildings by an average of 27% compared with the previous versions.

The December 2021 changes to AD Part L Conservation of Fuel and Power has created two volumes. AD Part L volume 1 (replacing ADL1A and ADL1B) relates to dwellings, and volume 2 (replacing ADL2A and ADL2B) to buildings other than dwellings. There is concurrent activity to develop the Building Regulations (and supporting documentation) across the four nations of the UK – England (AD Part L), Northern Ireland (Booklet F), Scotland (Section 6) and Wales (AD Part L). This article will focus on the recent revisions for England that particularly relate to the provision of boilers to deliver heating and hot water for non-dwellings, as referenced by ADL2.

Unlike previous revisions, the transitional implementation of the revised England documents relate to individual buildings rather than whole developments (that might be, for example, individual office units as part of an industrial estate). So, as of last month, the new provisions apply to all buildings individually unless ‘a building notice or an initial notice has been given to, or full plans have been deposited with, a local authority, in respect of that building, before 15 June 2022, provided that the building work on that building is started before 15 June 2023’.3 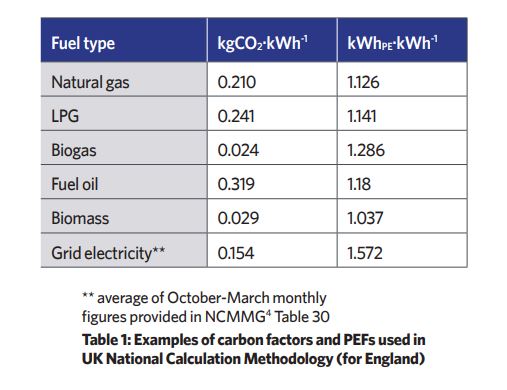 The key developments in ADL2 include ‘updated CO2 and primary energy targets for buildings, minimum standards for building fabric and fixed building services, as well as guidance to support the new legislation’.4

This iteration, which remains as a support to Part L of Schedule 1 to the Building Regulations 2010, introduces a metric for the assessment of energy efficiency in the form of the target primary energy rate (TPER) in kWhPE.m-2 per annum. This measure, which is already employed across the EU, will coexist with the previously employed target emission rate (TER) – the maximum CO2 emission rate for the building, expressed as kgCO2.m-2 per annum.

The adoption of the TPER is to provide a measure of the true primary energy use that, in practice, may be relatively straightforward to evaluate with Grid-supplied electricity and gas, so long as there is an appropriate, up to date, primary energy factor (PEF) for the respective energy source. Examples, taken from the most recent5 of PEFs and fuel carbon factors are shown in Table 1.

So, for example, if an old 85%-efficient oil-fired boiler was to be replaced with either a 93%-efficient natural gas boiler or a 100%-efficient direct electrical heater, the comparative CO2 emissions and primary energy demand can be determined using the data in Table 1, as shown in Table 2.

This indicates that although the electric boiler has the lowest CO2 emissions, the primary energy demand of the natural gas boiler is the lowest. The practical impact of this, in terms of compliance, is to discourage the use of electricity as a direct form of heating, in order to meet the TPER.

It may prove more challenging to determine an appropriate PEF for other energy sources, including locally produced renewables. 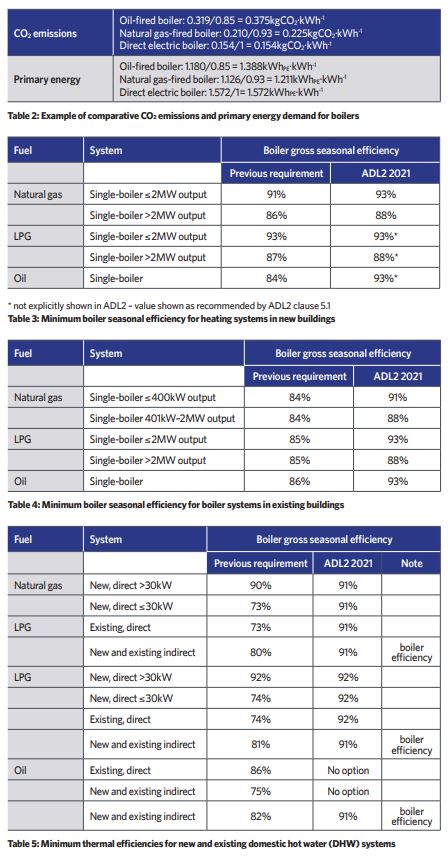 As with earlier requirements for regulatory compliance, a building is evaluated by comparing calculations of the performance of the ‘actual building’ against calculations of the performance of a theoretical building – the ‘notional building’, as described in the National Calculation Methodology Modelling Guide (NCMMG).5 This is done by determining the building’s emission rate and, as introduced in this update, primary energy rate.

It is carried out both at the design stage and when work is complete to assess compliance with the target values. For a building that is connected to an existing district heat network, in a change from previous regulations, the calculation should not include the impact of any change in heat sources expected after the building is connected and, so, cannot claim any benefit from envisaged enhancements to the heat network.

When considering a boiler installation in a new building, the boiler seasonal efficiency is required to be at least as high as listed in ADL2 (as shown in the abbreviated list of Table 3), which have incremental uplifts compared with the previous versions of the ADs. When replacing existing boilers, the requirements have a significant uplift, compared with those previously scheduled (in the 2013 Non-Domestic Building Services Compliance Guide for England), as shown in Table 4; they are now practically all in line with those required for new buildings. This effectively means that, in normal applications, non-condensing boilers will not meet the requirements and cannot be installed in new buildings, nor as replacements.

ADL2 requires that when a new heating appliance is installed in an existing building system it should have time and temperature controls and, where appropriate and technically feasible, weather compensation. 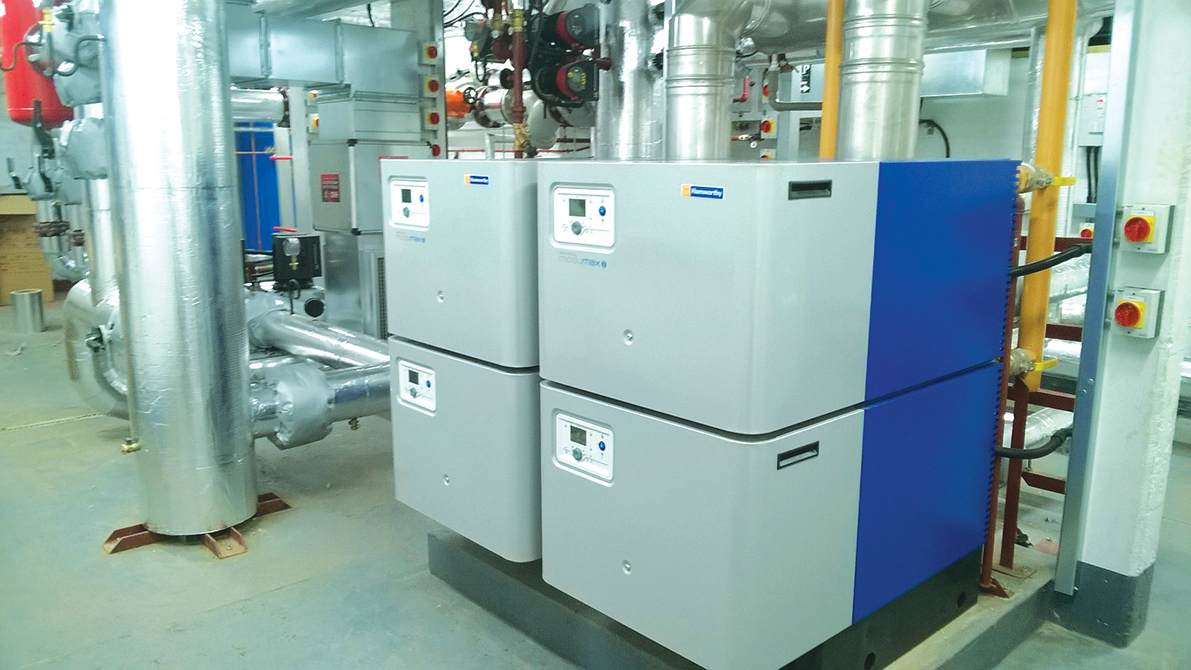 Like-for-like replacements of non-condensing water heaters will not be possible in commercial buildings, unless exceptional circumstances are approved by the local authority. As can be seen in Table 5, the minimum performance of DHW heating systems has been increased significantly so that condensing systems are practically the only suitable solution for fossil-fuelled water heaters.

Where a condensing means of delivering hot water cannot feasibly be fitted in an existing building – for example, where there is insufficient space for a replacement flue system – a boiler with minimum seasonal efficiency of 80% for natural gas and 79% for LPG may be used. Such exceptions are likely to be rare, and only when options to install compliant (condensing) units have been exhausted.

Different flue types are likely to be required on a condensing boiler if original units were non-condensing, as flue material needs to be resistant to corrosion (generally stainless steel or polypropylene), whereas an existing flue installation might not use suitable materials. (The requirements are provided in AD J Combustion appliances and fuel storage systems.)

Many currently installed non-condensing DHW heating systems serve applications, such as hospitals and leisure centres, that have high hot-water demand and employ water heaters with a significant volume of integrated storage. The requirements of ADL2 will undoubtedly neccessitate more careful consideration and planning when replacing such critical services.

In many cases, it is unlikely that replacement boilers and hot water heaters, which are supplanting non-condensing equipment, can utilise existing flue equipment and termination positions. Condensate removal will require a suitable drainage point, and applications below ground level – such as in basement plantrooms – may need to consider making provision for alternative methods of condensate removal, such as condensate pumps.

When sizing new and replacement space heating systems, ADL2 requires that, where feasible, ‘all parts of the system, including pipework and emitters, should be sized to allow the space heating system to operate effectively, and in a manner that meets the heating needs of the building, at a maximum flow temperature of 55°C or lower’. This lower temperature will allow the effective use of current technology heat pumps as a heat source, but will also ensure effective and efficient use of condensing boilers; for gas boilers to condense, and benefit from the recovery of latent heat from flue gases, requires a system return water temperature below (approximately) 54°C. 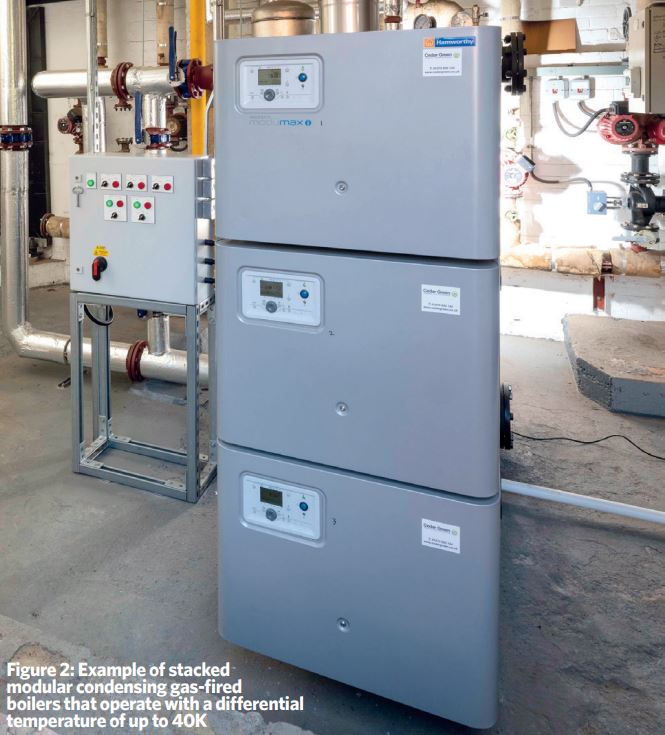 The higher temperature differential of the condensing boiler system will mean heating water flowrates that will be lower than those used by the heat pump system, so reducing pumping costs appreciably (if employing a variable speed pump). The lower flowrates will also produce a significantly lower pressure drop through the condensing boiler itself, so lowering pump energy consumption.

The revisions to the ADs that support the England Building Regulations are an interim measure towards the Future Buildings Standard. The UK Government considers that these revisions will make sure that construction professionals and supply chains are working to higher specifications in readiness for the introduction of the Future Buildings Standard from 2025.7 A full technical consultation on this new standard is expected in 2023, which will undoubtedly benefit from the input of practising engineers who have implemented the interim changes to ADL2.