Optics are a fundamental part of luminaire performance that may not be fully considered when the focus is on LED lifetime and efficacy as indicators of a luminaire’s suitability for a particular application. This CPD explores some of the technical demands and challenges when selecting appropriate LED luminaire diffusers as part of a general lighting scheme for office and educational applications.

As noted in the December 2020 CPD (module 173), manufacturers, consultants and contractors might limit their focus on LED lifetime and efficacy as indicators of a luminaire’s suitability for a particular application. While these are important factors, it is the design of the luminaire that will impact performance and suitability for a project. This is particularly the case in office and educational applications – such as universities, colleges and schools – where lighting standards concentrate on the illumination of a working space. CIBSE TM401 reports that, in a recent large-scale review of productivity studies, lighting was rated among the most important physical indoor environment parameters (beyond furniture and spatial arrangements), with an average estimated effect on task performance of around 10%. BRE FP374 Lighting and Health2 indicates that poor lighting, particularly lighting that causes glare , can create visual discomfort that may result in sore eyes, headaches, and aches and pains associated with poor body posture. These issues can largely be avoided by careful lighting design that meets the recommendations of codes and standards, with suitable shielding against high luminance parts of the lighting installation.

Optical control is crucial for luminaires in all applications. The selection and design of optics will vary for different environments, particularly those with specialised requirements, to achieve a desired performance. The correct optical control should suit the specific building, its purpose and its users, to reduce opportunities for discomfort and visual distraction, and so improve wellbeing and productivity.

Employing optics to direct the required quality of light to specific zones can realise significant energy savings, particularly when applied with ‘smart’ lighting controls – using less energy to achieve the same useful lighting levels. Appropriate directional control can also allow buildings to be used more effectively, potentially reducing the requirement for real estate. Although the benefits of energy and space utilisation are important, the key benefit is likely to be that employees, and other building users, can deliver the most effective results by operating in a healthy, comfortable, and productive environment.

The optics of the luminaire – which result from the combination of reflectors, lenses and diffusers – will impact the performance of a LED luminaire, and this is typically measured and recorded with a standardised set of photometric data. These are discussed and illustrated in CIBSE SLL Code for Lighting3 chapter 12.

As noted in CIBSE SLL LG7: Lighting Guide for Office Lighting,4 applications such as offices fitted with ‘traditional’ bare batten-type fluorescent luminaires may represent a glare source that results in eye strain, and contrast unfavourably with luminaires fitted with a properly designed optical control that is likely to include a diffuser. Diffusers are the most common form of optical control in offices and education applications, positioned in front of the light source to prevent glare and, in many cases, enhance directional control. Common lighting luminaires in general lighting applications typically employ opalescent (opal) or ‘frosted’ materials as diffusers. These are low-cost, but robust, smooth-surfaced, polymer materials, such as polycarbonate or acrylic (otherwise known as ‘PMMA’ – a highly transparent thermoplastic polymer), which are manufactured to provide good light transmission while also delivering physical and aesthetic benefits. Opalescent plastics are created by added pigmentation to the clear base polymer to mask the light source. Frosted light diffusers are manufactured by using a blend of two polymers that have different refractive indices, thereby providing diffusion of the light source.7 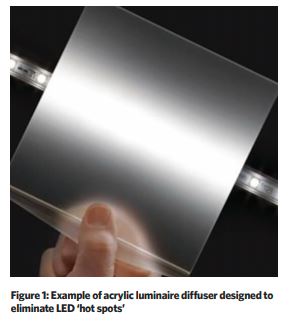 Electroluminescence creates light from the LED package, which will typically include one or more semiconductor chips mounted on a heat-conducting material, encapsulated in a protective material that may incorporate a primary optical lens. These are typically grouped together to make up an LED light source, and will produce highly directional, high-intensity light. The optics that are required to provide the best performance from such an electronic lamp are likely to be different from those of more traditional technologies, but still have a primary need to reduce glare. Traditional opalescent diffusers are unsuitable for LED technology, as they are unlikely to mask bright spots from the individual LED emitters, and offer insufficient directional control. Initially, frosted polymers were often employed, because their ability to mask the LED was good; however, this was at the expense of light output. Specialised acrylic diffusers – such as those illustrated in the examples in Figure 1 and Figure 2 – are now widely available with various performance characteristics, and provide a near Lambertian distribution of light (see boxout, ‘Selected luminaire performance terminology’). 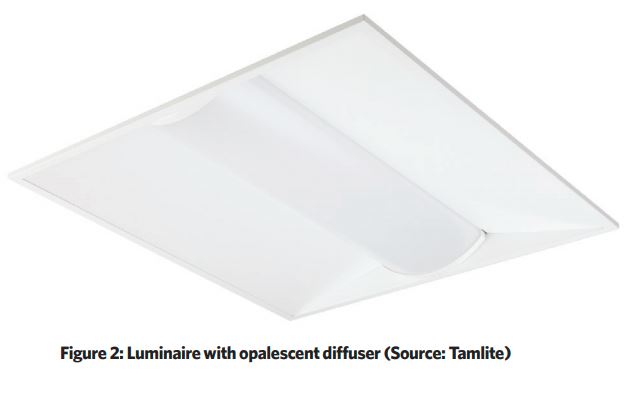 The choice for optical control in LEDs for such environments is limited principally to two options – an opalescent diffuser (such as in Figure 2), or one that contains lenses in a micro-prismatic diffuser (often abbreviated to ‘microprism diffuser’).

Simple opal diffusers will effectively scatter the light by refracting it as the light passes through the opal diffuser to produce a Lambertian distribution (as shown in the polar diagram in Figure 3), which ensures a more even, dispersed light distribution, enhancing uniformity and reducing shadowing. An opal diffuser would, for example, be a reasonable application for a flow area in a work building, providing a wide spread of light so people can see clearly as they move through the communal space.

LED luminaires employing microprism diffusers have seen increased application in architectural lighting where the prisms (lenses) are designed to control the emitted light into a specific distribution. The pattern of the light distribution can be finely adjusted through the specific design of the prismatic elements, which need to be manufactured from good-quality material that will not discolour or distort over time. Such diffusers are usually made of acrylic, polycarbonate or silicone resin, depending on the qualities required. This microprism diffuser increases the downward proportion of light, reducing horizontal emission and the opportunity for unwanted glare, so can be used to achieve improved values of UGR. 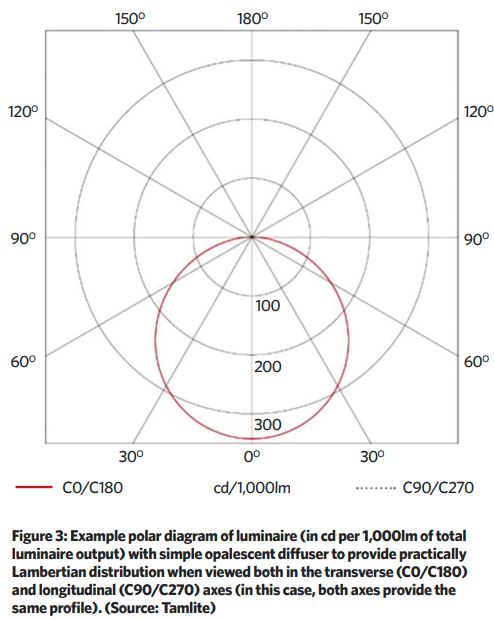 A ‘multicell optic’, such as that shown in Figure 4, can provide optimum spacing, but also maintain a controlled lower angle to satisfy UGR needs. The recessed light source also reduces discomfort glare, as there is no direct illumination experienced by occupants in adjacent workplaces. The aesthetic appeal of such luminaires may be debatable for some; however, they can provide benefits in terms of occupant wellbeing, space utilisation and energy savings. The polar curve for an example multicell luminaire employing a microprism diffuser is shown in Figure 5. A luminaire with correctly directed light is likely to have a greater overall efficiency in application compared with a fitting with an opalescent diffuser.

Office and educational working environments have evolved swiftly in recent years, as they shift away from plain, light-coloured walls to more complex surface finishes and colourings. Increasing use of ‘agile’ workspaces provides flexibility and tends to allow occupants to locate themselves where they feel most comfortable. At the same time, technology has evolved – employing less-reflective screens that are often portable and used in a multitude of positions and angles. This increases the challenge of maintaining a satisfactory UGR while delivering the required visual intensity of the light for all occupants. 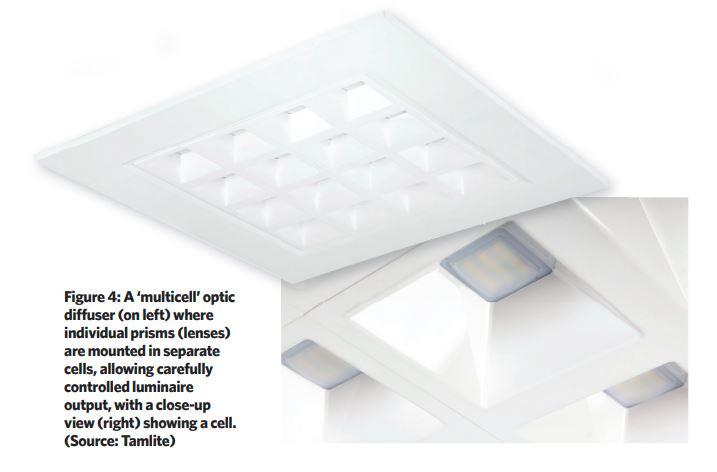 A microprism diffuser provides a much tighter control of light, directing it to where it is needed. This ensures that the luminaire, in an appropriate lighting design, can readily achieve the required UGR in open-plan spaces. Occupants who are not immediately adjacent to the luminaire –for example, on the other side of the room – can view the luminaire and not suffer from discomfort glare, as the light has been directed downwards with reduced sideways component, unlike an opalescent diffuser. CIBSE TM401 indicates that the design should also consider veiling reflections (high-luminance reflections that overlay the detail of the task) and reflected glare. The received luminous intensity is crucial to understanding how it may impact a person’s comfort. Considering the polar curve of Figure 5, for example, anyone stationed directly below a fixture with a microprism diffuser could receive a harsher light than somebody stationed below an opal diffuser. The light can then reflect off desks, paper or reflective screens, such as tablets.

This provides a challenge for lighting designers when specifying luminaires for office and educational environments: identifying the balance between technical glare through the room itself (the UGR), and the discomfort, or even disability, glare that will actually affect those working. 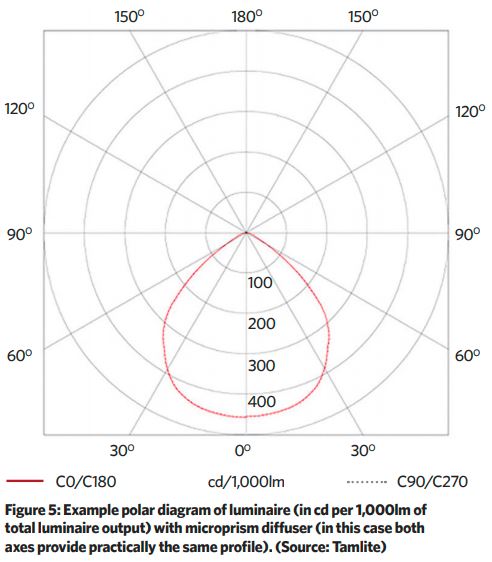 CIBSE SLL LG74 recommends consulting the client as early as possible, so that designers can understand how the workspace is used, and how best to tailor the lighting design to the needs of those in the space, while still achieving the necessary glare and uniformity standards. An option to minimise this discomfort glare in workplaces, while still achieving the required illuminance on desks and working planes, is to combine an opal diffuser with a microprism. This attenuates the light before it leaves the luminaire, but also directs the light downwards, tightening the angle of illumination to enhance UGR compliance in lighting designs. This does impose a slight reduction in luminaire efficacy; however, it satisfies the most important element of any office or education environment: the occupants.

As noted in CIBSE TM40, the balance of diffuse and direct lighting is also important in task areas, with sufficient directional lighting to reveal details and increase their visibility, but without harsh shadows that could interfere with the task. Lighting in offices and education environments can suffer from the so called ‘cavern effect’, where a relatively dark ceiling and upper walls are unnatural and uncomfortable to the human eye. This occurs when the lighting is solely directed downwards, with no upward illumination. Opal diffusers, providing a near Lambertian distribution, can partly solve this problem, but this can make it challenging to maintain an acceptable UGR. A potential solution is to use suspended luminaires with a built-in uplighter function, delivering illumination up to the ceiling as well as downwards. This would probably be achieved by employing additional upward-facing LEDs in the luminaire, with opalescent diffusers. This achieves the necessary angle to lower UGR, while providing total illumination on the ceiling for a brighter, more appealing workplace.

The selection of an appropriate luminaire is key to the success of a lighting design. The detail of the required optical performance for the luminaire must carry through the supply chain, so that the installation properly reflects the design intent. An inappropriate lighting scheme is likely to have a significantly adverse impact on productivity, health and operational costs that reach far beyond any ‘savings’ that may have been made in the design, procurement and installation of a generic scheme.