In November 2020, UK Prime Minister Boris Johnson outlined a ‘Ten-point plan for a green industrial revolution’, which included an increasingly decarbonised electrical supply grid and the ‘ambition’ for an additional 600,000 heat-pump installations by 2028, plus a desire to implement the Future Homes Standard in ‘the shortest possible time’.

Heating and hot-water production in UK homes are responsible for around 13% of the nation’s carbon emissions.1 As part of the effort to reduce greenhouse gas emissions to net zero by 2050, the draft Future Homes Standard anticipates that an average home will have 75-80% fewer carbon emissions than a home constructed to current standards.

The plan is to realise this by introducing very high fabric-efficiency standards, combined with low carbon heating systems. There will be a variety of systems and solutions that will depend not only on the type of application – for example, single- or multi-residence; low- or high-rise; town or country – but also on the most appropriate source of energy for the specific use and location.

As reported in 2015 by the Department of Energy and Climate Change (DECC),2 UK heat-network schemes – including district heating and communal heating – are thought to serve 200,000 dwellings and 2,000 commercial and public buildings.

Although the largest heat-network schemes are predominantly found in cities and on university campuses, there are also a large number of smaller schemes in the domestic sector, often linking communally heated blocks of apartments (flats).

Benefits from the increased use of heat networks can include energy cost and CO2 emissions reductions, by allowing the exploitation of lower CO2 and higher-efficiency forms of centralised heat generation. This has traditionally included combined heat and power (CHP), biomass, heat pumps, waste heat and low-grade heat sources.

Heat networks are typically described in terms of ‘generations’, as described in the boxout. As explained by Phil Jones,3 current UK district-heating heat networks are often second- to third-generation, supplying water at approximately 85°C to meet the needs of existing buildings. Any cooling is typically provided by separate systems, often employing local chillers rather than a district cooling system.

Much of the UK sector has been CHP-based, as the high value of electricity and relatively low cost of gas often made it an economic solution. However, decarbonisation of the electricity grid means CHP is increasingly hard to justify based on carbon savings, as shown by the indicative CO2 content of different sources of heat for buildings in Figure 1.

As discussed in the conference paper4 by Boissieux and Betz, an oft-used alternative in new urban, multi-residential buildings – particularly where there is no access to a wider district heat network – is communal heating.

This would typically consist of a main plantroom with heat generators delivering a heating water loop under the control of a building management system (BMS). This heating loop then feeds individual heat interface units (HIUs) in each dwelling, which provide heating and hot water on demand.

The HIU includes a plate heat exchanger with accompanying valves and pumps to distribute the heat to the heating system in each dwelling, or to heat the hot water, as required. 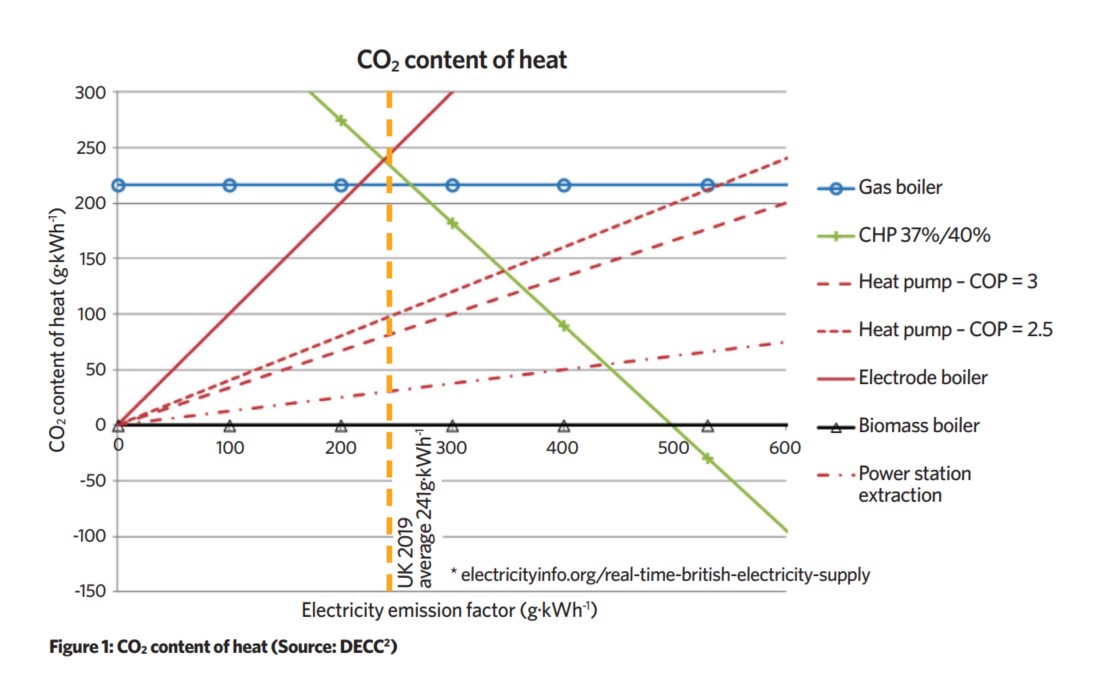 The design of such systems apply diversity to the size and mix of the heat generators in the plantroom to ensure that there is always sufficient heat available while also meeting the local statutory requirements for system efficiency. This – as with all diversity calculations – is subject to degrees of uncertainty, which inevitably leads to some oversizing to ensure no deterioration in service.

The 2015 DECC report2 indicated that the losses for schemes that deliver heat to the individual customer (each dwelling or apartment) were significant, with one scheme – from the selection of 14 existing large heat-network schemes selected as representative of UK installations – recording losses of 43% (with the overall sample average being 28%). ‘Evidence suggests that high losses can be experienced through internal distribution pipework within buildings,’ the report stated.

These ‘losses’ will not only reduce the overall efficiency of the systems, but are also likely to add to overheating problems in summer, as building heat networks operate to meet the need of individual apartment HIUs to deliver domestic hot water (DHW).

Such overheating is, reportedly, particularly prevalent in communal areas – such as corridors, where heat-network pipework traditionally runs in ceiling voids – which can require separate ventilation measures or temporary fans and comfort air conditioning to deal with the issue.

The recently published London Energy Transformation Initiative (LETI) Climate Emergency Design Guide5 illustrates indicative opportunities for reducing energy consumption in new residential developments to transform energy use  – in terms of energy use index (EUI) kWh.m-2.y-1 – from current practice to one that delivers a low-energy design, as shown in Figure 2.

Among the basket of measures – most of them associated with good building practices – approximately 40% of EUI reduction could potentially be from the application of heat pumps and, to a smaller extent, mechanical ventilation and heat recovery (MVHR) and hot-water efficiency.

Among several other feasible options, LETI5 identifies water source heat pumps in apartments that are connected to a tempered ambient loop as having the potential for zero carbon once the electricity supply grid is decarbonised (or if the systems are powered by onsite renewables).

The promise of the Future Homes Standard, together with established methodologies such as CIBSE TM596, and tools such as those developed by the Good Homes Alliance,7 all aim to identify and mitigate overheating risks in new homes using passive means before mechanical cooling solutions are considered.

However, homes – particularly those in urban, densely occupied areas – may require active cooling systems to maintain the comfort, health and wellbeing of occupants. Without appropriate system design at the planning stage, this will inevitably lead to the further proliferation of the ‘portable air conditioner’, which is increasingly promoted as a ‘standard’ home appliance in the UK.8,9,10

Residential heat pumps, together with whole-home ventilation systems employing heat recovery, may be designed to effectively provide cooling (as well as heating and DHW). Employing a water source heat pump for each residential unit, exchanging heat with an appropriately designed and controlled ambient communal water loop, can provide heat recycling within a building – for example, between heat pumps that are providing space cooling and those that are generating DHW) – and can connect to district heat networks so that heat rejected from cooling systems is redistributed to buildings with heat demands.

The use of an ambient network (as opposed to fourth-generation) provides greater opportunity to recover waste and employ renewable heat sources, such as solar water heating, seasonal thermal storage and heat recovered from sewage. 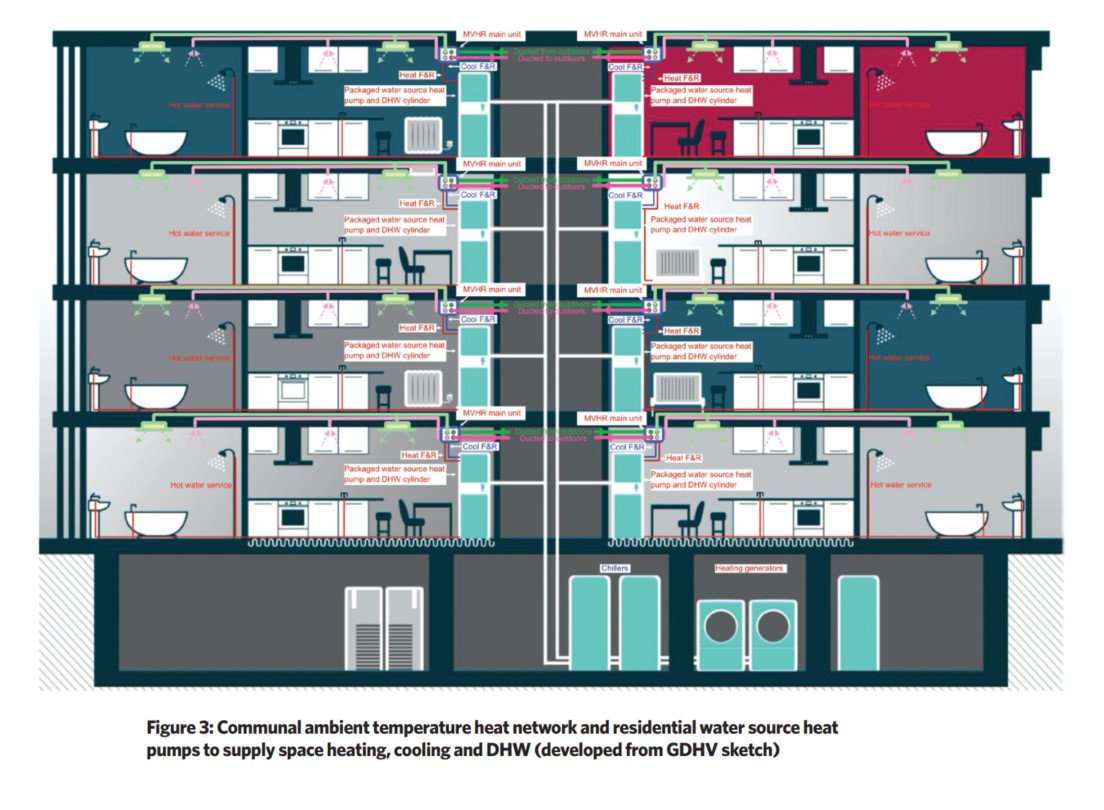 In a system such as that illustrated in Figure 3, the individual heat pumps are connected to a single communal ambient heat loop, nominally maintained at 25°C flow temperature and, typically, 15°C to 20°C return water temperature. This flow temperature was chosen for this system as an effective mid value, so that the R410A-charged heat pumps can perform consistently at high heating coefficient of performance (COP) and cooling energy efficiency ratio (EER), while also reducing the potential for heat transfer between the insulated loop pipework and the air within the building.

The heat pump in each apartment can be indirectly connected to a range of emitters, including air coils, radiators, underfloor heating and fan convectors. DHW is provided by an indirect hot-water cylinder, packaged within the modular unit, which is charged by the heat pump. An optimised legionella protection cycle employs a direct electric immersion heater to provide top-up heat to stored DHW beyond the 55°C economically attainable from the heat pump.

The heating systems within the space are limited to a flow temperature of 55°C for applications such as underfloor heating, air coils and low-temperature radiators. A 6kW heating/4kW cooling unit, such as that shown in Figure 4, has a heating COP of between 3.5 and 4.1 when producing water up to 55°C, with ambient loop temperatures between 15°C and 25°C. To provide chilled water at 10°C the EER is 5.1, with an ambient loop temperature of 25°C. The unit produces a sound power of 36dBA (similar to a domestic refrigerator/freezer).

The insulated ambient loop design is optimised to ensure the best compromise between maintaining a low pressure drop and minimising heat transfer to the adjacent air. The water flowrate and temperature is controlled to ensure the most effective operating conditions while satisfying the load requirements of the individual heat pumps.

The ambient loop flow temperature can be maintained with centralised heating and cooling plant, or may be connected to renewable sources or a wider area heat network (which may benefit from ‘waste’ heat from district network resources). These systems can be readily included in the calculation of Standard Assessment Procedure (SAP) evaluations through specific methodologies,11 such as that developed by BRE for the illustrated system.

Capital costs12 (produced by the manufacturer) of an example single communal ambient loop used to provide heating and cooling through residential heat pumps were compared with those of a system comprising a gas boiler, CHP and chiller system, using both chilled and hot water HIUs and fan coils for cooling for a building with 125 apartments. The cost of the single communal ambient loop and heat pump system indicates a significant saving.

Such systems can satisfy year-round health and comfort needs within apartments and reduce overheating in communal areas, as there are practically insignificant heat gains from the single communal ambient loop. Heating and cooling is in the control of the individual residents, so the principal cost of heating and cooling is also directly under their control, without the need for heat metering. As the electricity grid decarbonises, their carbon emissions reduce. The operating costs for both resident and building operator are likely to be reduced compared with more traditional third- and fourth-generation systems.

The maturation of heat networks

Heat networks are typically categorised in terms of ‘generations’, which are necessarily broad-brush descriptions:

First- and second-generation networks were popular until the mid-20th century – employing steam and, latterly, high-pressure hot water – and were notable for high heat losses. Beyond large, managed sites, such as hospitals and institutional estates, these are rarely used today.

Third-generation networks have been the prevalent system in recent years, circulating hot water 70°C to <100°C, but many reportedly13 suffered from poor control. Most existing UK heat networks use this technology.

Fourth-generation networks operate at lower temperatures of around 40°C to 60°C. These are more able to use low carbon heat sources and result in lower heat losses.

Fifth-generation, or ‘ambient’, heat networks employ water at, or close to, ambient temperature, reducing or eliminating heat loss and reducing the reliance on pipe insulation significantly. These are used in conjunction with heat pumps to raise temperature to deliver heating and hot water.