Following the widespread adoption of LED lighting, determining luminaire performance has become more complex compared with that of traditional light sources. This CPD will consider the principal standardised metrics that are used to guide the performance selection of LED luminaires, and provide some discussion of their utility.

Appropriate applications of LED lighting can offer a measurable improvement in function and performance compared with traditional fixtures, and this – together with their longevity and associated relative long-term cost benefits – has ushered in widespread LED adoption. (Such LED applications are often referred to as examples of ‘solid state lighting’ [SSL].)

Opportunities offered by the physically small, long-life LED, together with the benefits of offsite factory assembly, have led to the widespread development of the ‘LED luminaire’. This is a complete integrated lighting unit with an irreplaceable LED lamp (and associated components) in a single sealed modular housing (see ‘LED luminaires’ panel).

In general-purpose electric lighting applications, the lighting fixture – often referred to as a ‘luminaire’ – and the lamp have traditionally been manufactured and supplied as two separate products. With relatively short lamp lives, this allowed the lamp to be changed without impacting the principal installation. With the advent of efficient LEDs, with lifetimes of 30-50,000-plus hours, manufacturers have increasingly offered units that incorporate the light source, control (driver), heat sinks, housing and optics in a single module that optimises components and performance. These are able to offer novel integration and styles of lighting for the built environment that can also be used to host sensors for other services. LEDs will underperform when operating at higher-than-expected temperatures. Long periods of high ambient temperatures may decrease their expected lifetime, and it is common for LED drivers to have a dimming system in place for when the power is excessive. The majority of such integrated packaged LED luminaires will require complete replacement when the light source reaches the end of its operational life. This opens up opportunities for ‘plug and play’ type applications, but it also requires awareness of total life-cycle impact of operational life and luminaire replacement, to ensure sustainability.

Such packages are commonly referred to simply as a ‘LED luminaire’, such as that shown in Figure 2.

The recent International Energy Agency (IEA) report1 charting the progress towards a future Sustainable Development Scenario2 (SDS), details that global LED use has increased substantially in recent years, as shown in Figure 1. It has risen from a market share of 5% in 2013 to nearly half of global lighting sales in 2019, with integrated LED luminaires taking a significant part of the LED market.3 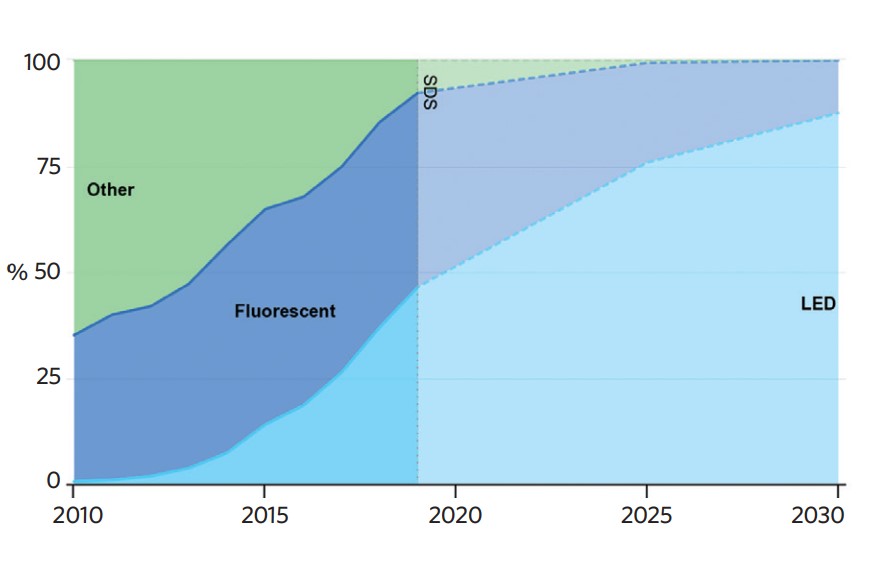 Aside from the significant benefits of size and format, the growth in the adoption of LED lighting is being driven by the high light output per watt of electrical power consumption – the ‘luminous efficacy’, as shown in Table 1.

The swift democratisation of this relatively new, effective technology has led to the production of varying qualities of LED fittings, which may offer benefits compared with the earlier devices, but may not fully meet the standards expected of modern luminaires. The IEA, considering the global deployment of LEDs, notes: ‘Improved metrics for quality control and more appropriate testing procedures are also critical to ensure LED energy performance and quality.’ 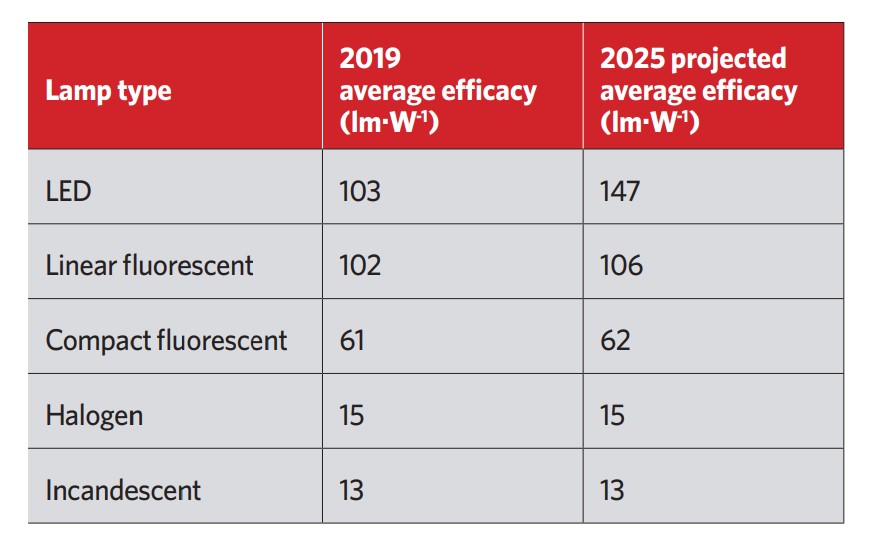 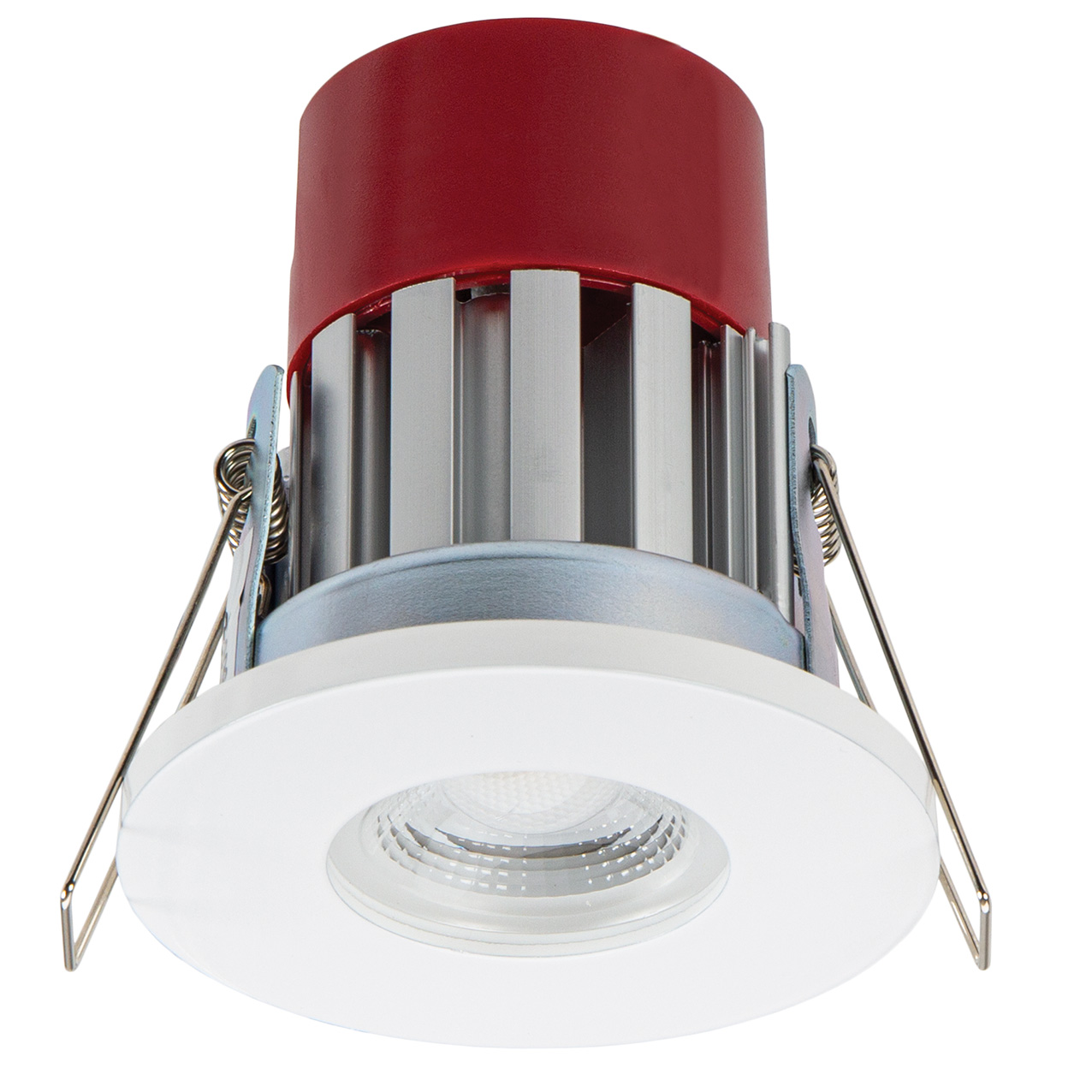 Unlike traditional lamp technology, it is rare for an LED to fail completely. However, the intensity of light emitted tends to fall over time – termed as ‘lumen maintenance’. In an LED luminaire, this could be the result of individual LEDs giving out less light and, possibly, some LEDs giving out no light .

This key difference in the characteristic performance has driven the development of standardised tests specifically for LED luminaires. The principal international performance standard for LED luminaires for general lighting applications is IEC 62722-2-1 Luminaire performance – particular requirements for LED luminaires (published in the UK as BS EN 62722-2-14). This provides the testing method with a minimum test time of 6,000 hours, with the luminous flux recorded every 1,000 hours.

A selection of the key performance attributes that are determined using the methods of IEC 62722-2-1 are shown in Table 2. Each of these parameters is important when assessing the suitability of luminaires and can help specifiers choose the right product for a particular application. However, such data is open to misrepresentation and, potentially, false reporting. 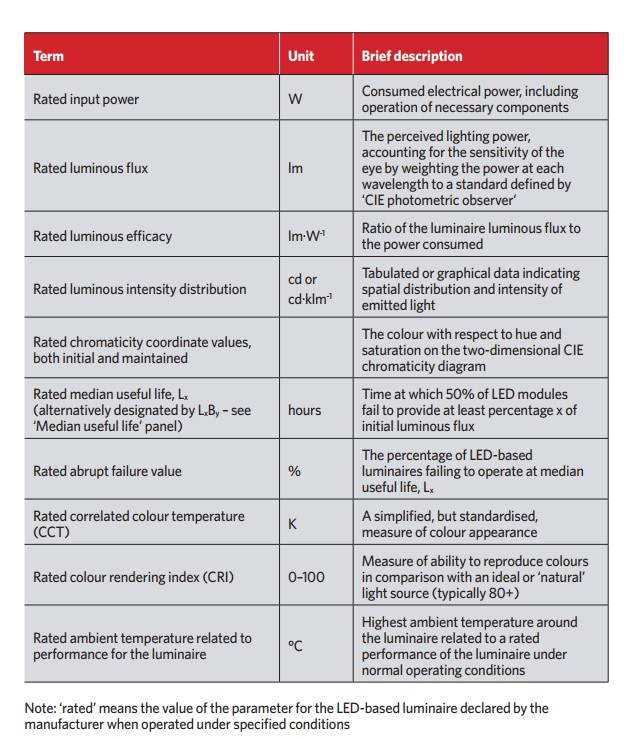 LightingEurope5 identified a number of common ways in which such key luminaire data could be misreported:

These issues can come about from intentional misreporting to improve a product’s performance data, or can come from genuine error. It is important that manufacturers and specifiers are diligent in ensuring that the data is applied appropriately and requirements from relevant standards are used for each application. For example, a lighting project being undertaken in an indoor workplace would apply BS EN 12464-1:2011 Light and lighting: lighting of work places Part 1: indoor work places. This requires several features of the product to be declared. However, it does not consider the input power or luminaire luminous efficacy to be essential parameters. As a result, functionally important data such as this may be inadvertently disregarded when comparing potential luminaires for an indoor lighting application. It is important to interpret luminaire attributes holistically for such a project – including lumen output, colour rendering index and LED lifespan – rather than simply energy efficiency. 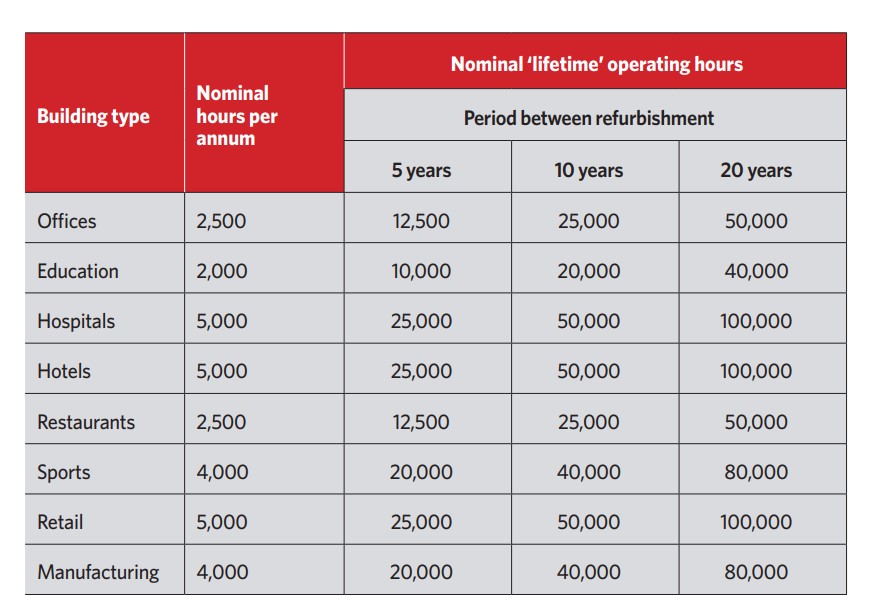 The IES Standard LM-80-08,6 Lumen degradation lifetime estimation method for LED light sources (known as LM-80), provides an alternative method for manufacturers and vendors to measure the point at which an LED is estimated to still supply useful light output, how light output degrades under various conditions, and the associated colour shift. LM-80 sets the standards for uniform test methods under controlled conditions for LED manufacturers, measuring LED maintenance while controlling the case temperature, the forward voltage and current to the LED for a minimum of 6,000 hours. This is tested at three case temperatures: 55°C, 85°C and a third temperature selected by the manufacturer.

It is commonly represented that the human eye is only sensitive to lumen depreciation of 30% or more, so it is quite common to see LED luminaire manufacturers present products with L70 performance data that has been assessed using methods from LM-80.

Figure 3: Illustration of the impact of accounting for percentage loss of LEDs in luminaire output (Source: Tamlite)

A LED-based luminaire will last as long as the component part with the shortest life. ‘Median useful life’ is the time elapsed until 50% of the LEDs in a luminaire reach a specific percentage of their initial light output, and is a prediction based on performance data gathered over a short period of time. This ‘useful life’ can be referred to as LxBy. This means that, after that period of use, y% of the luminaires have seen lumen output depreciate to less than x% of their initial output. The ‘median useful life’ maintains the value of B at 50. Some manufacturers choose to use a different value for B; however, the practical difference in predicted life may be nominal, as illustrated in the example shown in Figure 3. As the standard measurement employs B50, LED luminaires are not required to indicate a specific B designation

The longevity of LED light sources makes it impossible to measure the whole-life performance – many LEDs have functional lives of 50,000 hours or more. The calculation methods defined by IES TM-21-11,7 Projecting long-term lumen maintenance of LED light sources, are used to extrapolate beyond the time of testing. For TM-21, data is collected according to IES LM-80-08 from a sample set of at least 20 units at a given case temperature and drive current. (The sample size will affect the uncertainty of the projection, so a small sample size will lead to shorter projected life in order to increase the statistical certainty.) The TM-21 method is limited to extrapolating lifetime to six times the original test duration. So, if a product is tested for 6,000 hours, the maximum lifetime that can be claimed in accordance with standard TM-21 is 36,000 hours. A product can claim a lifespan of any figure – the industry typically refers to this as the ‘calculated data’; however, in accordance with TM-21, only six times the tested time can be ‘reported data’.

A key aspect of determining the lifetime of an LED luminaire is ensuring that the installation life is specific to the application, rather than to the product itself. Table 3 indicates the typical nominal installation life of several example internal lighting applications.

This indicates that, for indoor projects, most installations are unlikely to require a useful life of more than 50,000 hours. This can drive the decision on product specification. So, for example, if specifying for an office, the lifetime of any product that is more than 50,000 hours is irrelevant. Products must then be judged on their performance and their suitability for the application (CRI, CCT, spacings, and so on), and not simply on lifetime. It is, of course, critical that these important decisions on performance do not override the primary requirement to deliver suitable lighting for the application. As with all building services systems, properly informed lighting assessment and design
is required.

In certain applications, such as retail and leisure facilities, colour is a common complaint when employing lower-quality LED luminaires, whether it is the colour rendering index or the colour temperature itself. In many applications, particular colour temperatures are required, so it is crucial that appropriate LED lighting is used. Luminaires that have impressive lifespan data may still be subject to colour deviation or even discolouration over time. Some manufacturers are tempted to economise on luminaire design and optical control that can otherwise deliver benefits beyond those of simple energy efficiency.

LED luminaires can offer excellent solutions for the lighting industry. However, to maintain high-quality lit environments, it is crucial that relevant standardised and accessible metrics are available for – and used by – designers and specifiers to ensure robust products may be selected and applied appropriately.