Buildings and the construction sectors combined are responsible for 36% of global final energy consumption, and nearly 40% of total direct and indirect CO2 emissions. Energy demand from buildings and the construction of buildings continues to rise, driven by improved access to energy in developing countries, greater ownership, and use of energy-consuming devices, plus rapid growth in global buildings’ floor area of nearly 3% per year. Some of the fastest-growing end uses are space cooling, with a year-on-year continued rise in global energy intensity per floor area.1

The environmental impact from refrigeration that provides the cooling for HVAC systems results from direct and indirect emissions. Direct emissions occur because of refrigerant escaping from systems that might be a result of faults and breakages, or during maintenance and repair procedures. Indirect emissions result from the generation of power that is consumed by the refrigeration machine.

This is likely to release CO2 – as well as other environmentally deleterious gases and particulates – into the atmosphere from the power-generation plant. The environmental impact will depend on: the thermodynamic effectiveness of the refrigerant; the efficiencies of the refrigeration system and the associated systems; the energy losses in the power-distribution systems; and the primary energy source at the power plant. So, for example, if the primary energy source was deemed as ‘renewable’, this impact may be reduced. The unknowns of a future supply scenario, however – as well as the benefits of lower operating costs –should always favour systems that require less power to operate, subject to an appropriate life-cycle analysis.

There was a step-change in the popular understanding of the impact of refrigeration on the global environment following the discovery of the Antarctic ozone hole in late 1985, which was linked to direct emissions. This highlighted the need for stronger measures to reduce the production and consumption of a number of chemicals, including commonly used refrigerants that were, principally, the halogenated hydrocarbons, which encompass the chlorofluorocarbons (CFCs), such as R12, and the hydrochlorofluorocarbons (HCFCs), such as R22. This culminated in the 1987 Montreal Protocol on Substances that Deplete the Ozone Layer. This was subsequently adjusted to accelerate the phase-out schedules, and amended to introduce other kinds of control measures and to add new controlled substances to the list.

Using 2010 data, the US Department of Energy (DoE) estimates that the equivalent CO2 emissions from the cooling component of air conditioning were as shown in Figure 1, with approximately 25% (or 175 million tonnes CO2e) the result of direct emissions. For some perspective, the total UK emissions relating to all activities in 2018 were2 451.5 million tonnes CO2e.

The direct emissions may be managed through operational procedures to minimise leakage and by employing systems that require reduced refrigerant charges. New technologies may assist in reducing environmental impact. This might include enhanced heat exchangers and ‘smart’ leak detection, more robust manufacturing processes, superior design, and alternative refrigerants. 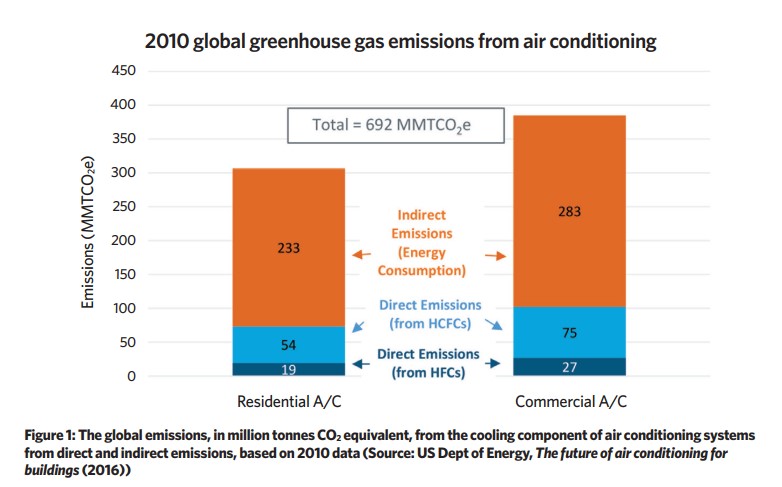 The hydrofluorocarbons (HFCs), which have zero ozone depletion potential, rose in popularity for use in refrigeration, air conditioning and heat pump equipment as CFCs and HCFCs were phased out.

Most of the HFCs are thousands of times more harmful to the climate as GWP gases (see ‘Global warming’ boxout), compared with the refrigerants they replaced. The UN identifies a variety of impacts from the resulting climate change, such as: soil erosion; more crop diseases; reduced water availability; hunger and malnutrition; heat-related illnesses; wildfires; shifting fish stocks; losses of habitat for wildlife; and the melting of ice and snow that is raising sea levels

In response to the rapid growth of HFC emissions, the Montreal Protocol adopted the Kigali Amendment in 2016 to gradually reduce the global production and consumption of HFCs. It is estimated that phasing out HFCs will avert global temperatures from rising by 0.5K by the end of the century and, if accompanied by better energy efficiency measures, will potentially avoid one-degree celsius of warming.3

Refrigeration is set to be one of the fastest-growing sources of warming emissions, as incomes rise in developing countries, temperatures increase, and global cooling demand soars. More than one billion people presently face immediate risks from a lack of cooling, and a warming planet means this number will only increase – and meeting that cooling demand will itself contribute to heating the planet.

Left unchecked, direct and indirect emissions from air conditioning and refrigeration are projected to rise 90% above 2017 levels by 2050,4 resulting in an increase in greenhouse gas emissions equivalent to one-third of all current emissions.

The Kigali Amendment was welcomed by many chemical and manufacturing companies in developed countries because it can endow them with green kudos and market advantage over inferior products. It was much harder for developing countries, as their companies have relied on old refrigeration and coolant technologies, and need to invest in research and development, and upgrade or replace factories and equipment.

The HFC phase-down provides an opportunity to combine other energy efficiency measures, alongside developing energy efficient and environmentally responsible refrigerants. The details of the agreed Kigali Amendment are quite complex, providing a different trajectory for substance phase-out that largely depends on a country’s per capita consumption of ‘controlled substances’.

Until the 1980s, there had been only gradual change in refrigerant choices over the previous half-century. In the past 40 years, however, there has been a steady change in the application of refrigerants, as shown in Table 1. (The categories ‘synthetic’ and ‘natural’ can be somewhat misleading, as manufacturing processes are likely to be required for both types of refrigerants.) 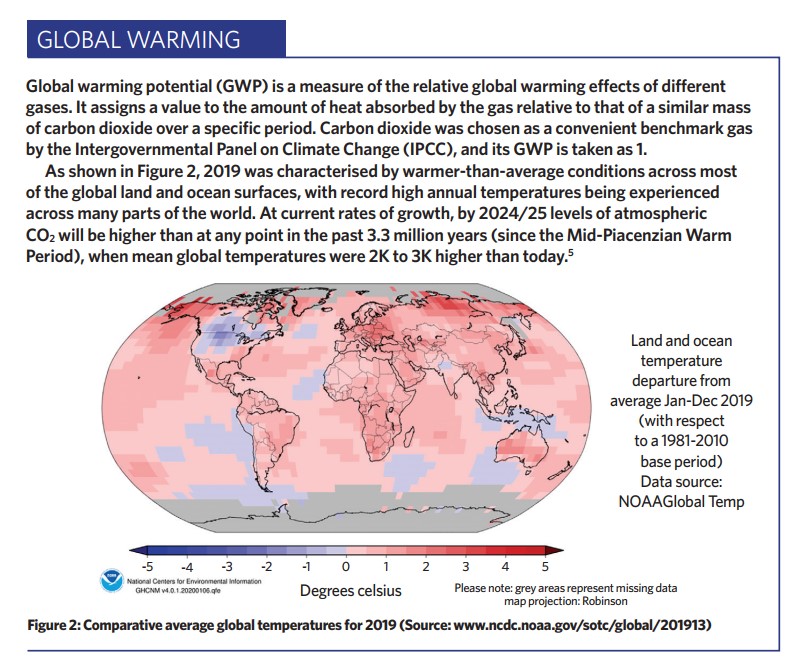 The majority of HFC consumption is in the cooling sector, comprising refrigeration, air conditioning and heat pumps, and more than half of that total HFC consumption is thought to come from emissions resulting from the servicing of installed equipment.7

As a result of the Kigali Amendment and, in Europe, the F-Gas Regulation, long-term refrigerant and system solutions need to have low GWP.  Alternative refrigerants that have very low or zero GWP – such as new applications of extant substances, mixes of refrigerants, hydrocarbons (HCs), ammonia and CO2 – are increasingly available and approved for use in many markets.

CIBSE Journal CPD Module 146 (June 2019) discusses the main criteria that determine whether a potential substance is likely to provide a safe, environmentally sensitive refrigerant for building services applications, including the flammability/toxicity ‘safety group’ designations (A1… B3). The F-Gas Regulation, EC 517/2014, focuses on reducing emissions and the responsible end-of-life, recovery and destruction of gases, and, in Europe, these are most commonly the A1 HFCs R134a (GWP=1,430), R404A (GWP=3,922) and R410A (GWP=2,088). 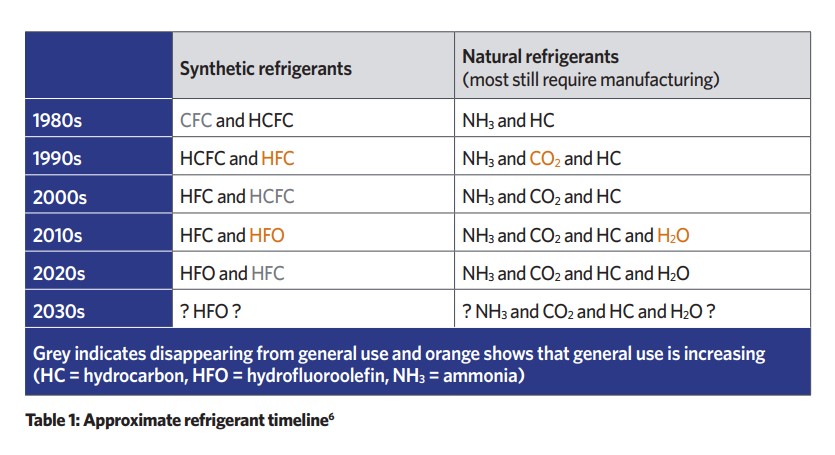 When assessing the performance of a refrigerant alternative, the ‘total equivalent warming impact of a system’ (TEWI,8 measured in MT CO2e) accounts for both the direct (from leaks, servicing and end-of-life disposal) and indirect emissions. When evaluating TEWI, the energy efficiency of the refrigeration system is a significant element because, as seen in Figure 1, the indirect emissions are likely to dominate. This may mean that a low-GWP, but low-performance refrigerant may actually have a higher TEWI when compared with a higher-GWP refrigerant. Practically, the majority of the replacement refrigerants will require significant modifications – or, more likely, complete replacement – of the refrigeration system. 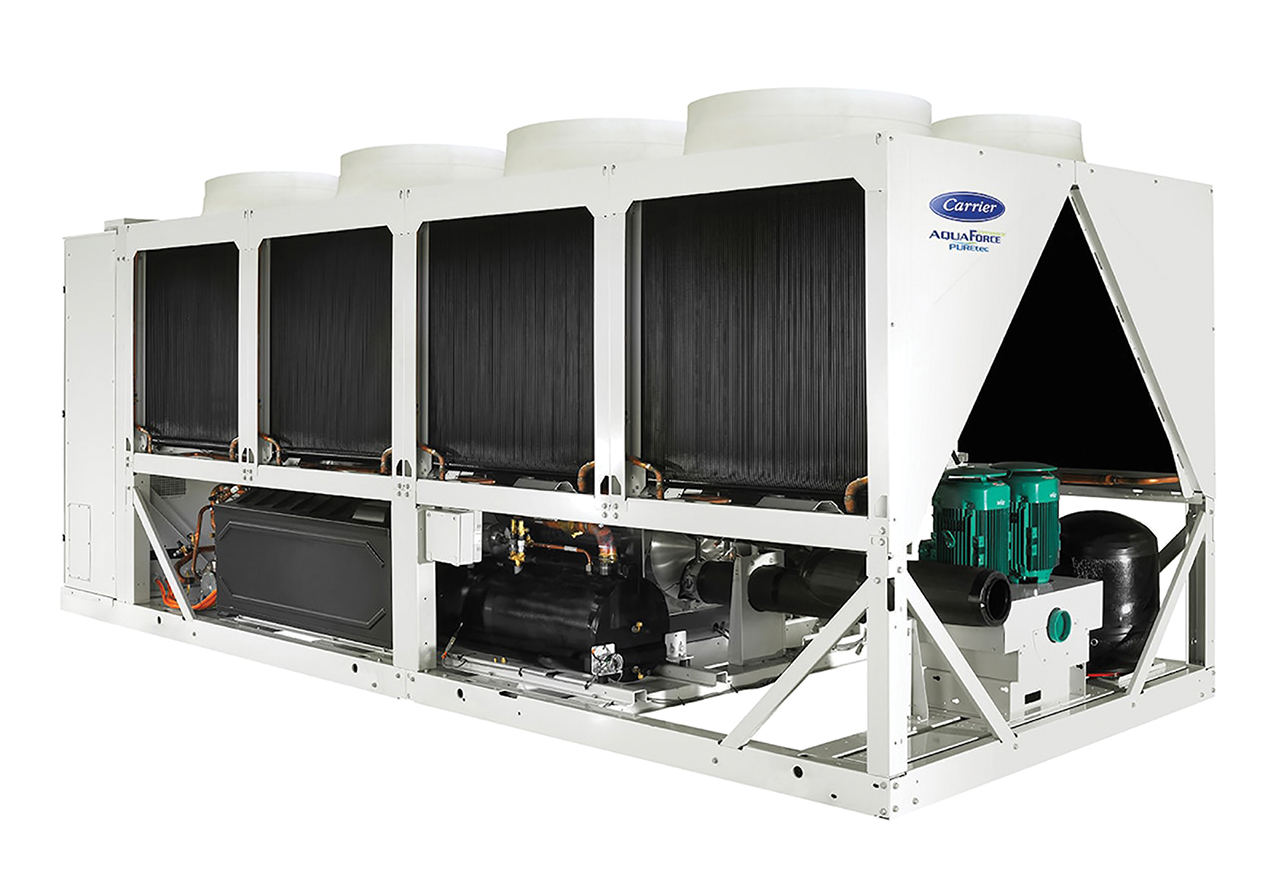 So, for example, HFOs such as R1234ze(E), with GWP <= 1, are already being successfully used for space cooling and heat-pump applications, and are more energy efficient than the ‘natural’ refrigerants (as well as the R134a that it commonly displaces), so resulting in a lower TEWI. (Considerations on the safe application of HFOs, classed as A2L refrigerants, are discussed in CPD Module 146.) For large chillers currently employing R134a, it is possible to retrofit the system with R1234ze(E) – this requires expert advice.

Single-component fluids make it simpler to charge systems, and are readily available from refrigerant distributors. R32 has been widely used for air conditioning and heat-pump applications, displacing R410A systems and providing energy efficiency gains of up to 10% compared with R410A. R1234ze(E) has been adopted broadly, with more than 1,000 HFO chillers installed in Europe, providing a TEWI reduction of around 15% compared with similar systems employing R134a.

By applying the lower-GWP refrigerants and system designs that employ new technologies to reduce refrigeration charge and motor energy consumption (such as in the air-cooled chiller illustrated in Figure 4), the overall TEWI can be reduced significantly in commercial chillers and heat pumps, compared with the previous generation. Both R32 and R1234ze(E) are A2L refrigerants, but with appropriate design – including external siting of active refrigeration components – they have proved, so far, not to present any significant flammability issues. The blend R454B has been applied successfully to succeed R410A, particularly in North American ducted residential and package unitary commercial products using scroll compressors.

The technological transformation is a challenge for the whole supply chain, not just the scientists, and will probably result in more refrigerants being developed, but with narrower operating envelopes targeted at specific applications and markets. As recent global events have proved, the future – even in the short term – is impossible to predict. However, as prices become more competitive, and the impacts of global heating become more evident, it is likely that the future generations of synthetic refrigerants are likely to be dominated by the HFOs and increasingly ingenious technical solutions.