Multilayered pipes were developed to overcome deficiencies that were apparent in particular applications of simple flexible plastic pipes, while retaining their significant inherent benefits.

This CPD will examine the particular attributes and simple application methods that have led to the widespread application of this convenient – and comparatively low-cost, low-environmental impact – lightweight tubing.

Flexible plastic piping became popular in the 1980s and 1990s as an inexpensive alternative to traditional metal pipework systems, offering advantages over other materials, such as flexibility, ease of installation, resistance to freezing and reduced water hammer. Some of the early materials suffered from notable failures.

Nonetheless, the significant benefits of simplified installation techniques – driven, in part, by the elimination of hot-working on sites, and the challenges of maintaining an appropriately skilled workforce – led to an accelerating development of safe, flexible, easily cut and jointed plastic piping suitable for many of the fluids used in building services systems. 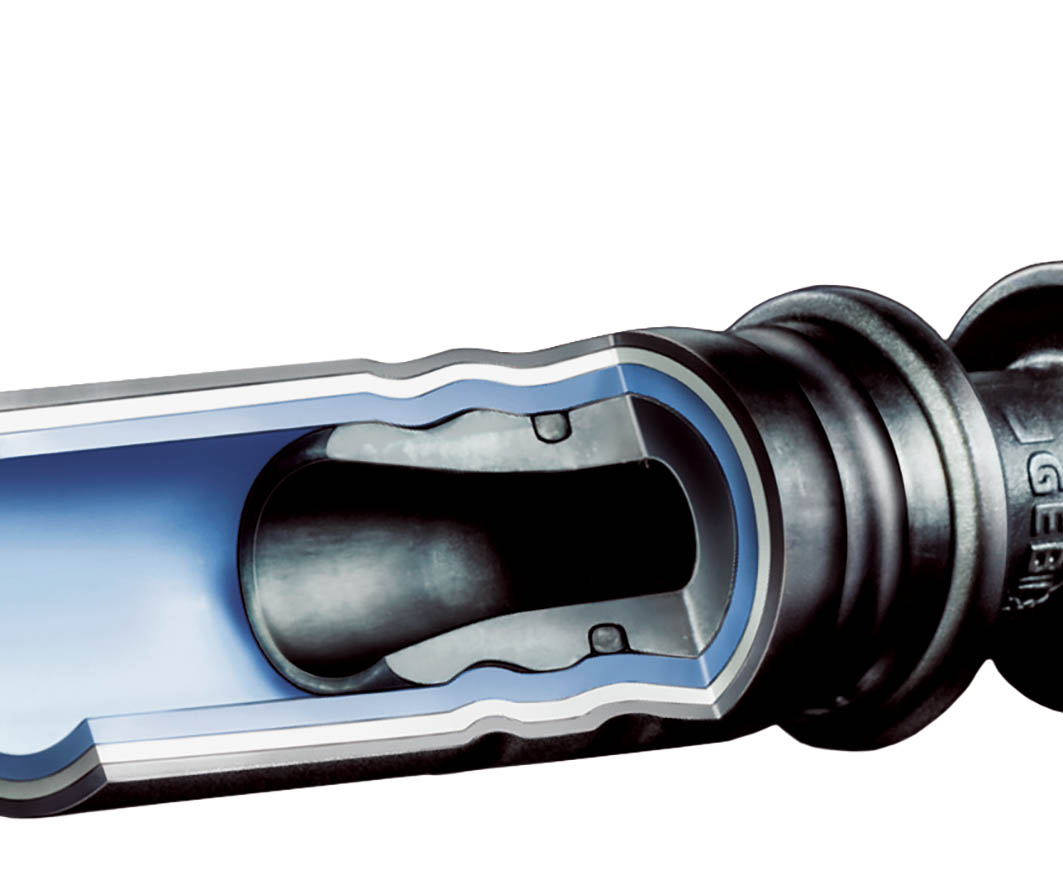 However, the very plasticity of the material meant it was not able to replace the traditional metal materials fully; its ease of deformation required extensive fixing and protection, while it also suffered from poor aesthetic qualities, as it was unable to hold visually acceptable straight pipe runs and properly shaped curves.

Probably most technically troubling, though, was the ease with which oxygen diffuses through plastic, producing significant unwanted oxygenation of the water flowing in closed-loop systems. Multilayered pipes were, therefore, developed to overcome these deficiencies.

Multilayered pipes are created with two thin layers of plastic – typically a form of polyethylene (PE) – with an intermediate aluminium layer. To manufacture multilayer pipes, such as that shown in Figure 1, the initially flat aluminium sheeting is drawn onto a glue-covered PE pipe, shaped and welded longitudinally along its face.

This welding process maintains the circular section of the pipe (some early pipes used lapped jointing, which caused irregularities). In a continuous process, the aluminium surface is warmed and used to extrude adhesive and the final outer plastic layer so as to complete the main pipe construction of polymer-aluminium-polymer (PAP) pipes.

The pipe is then printed with identifying information, surface finished, and either coiled or cut into straight standard lengths. The addition of the aluminium layer to what is otherwise, effectively, a flexible plastic pipe transforms the utility of the pipe material.

The thin aluminium layer, with a precisely controlled thickness – typically 0.2-0.7mm thick, dependent on manufacturer – prevents the diffusion of oxygen through the pipe wall. (Traditional steel and copper pipes are natural oxygen-diffusion barriers.) 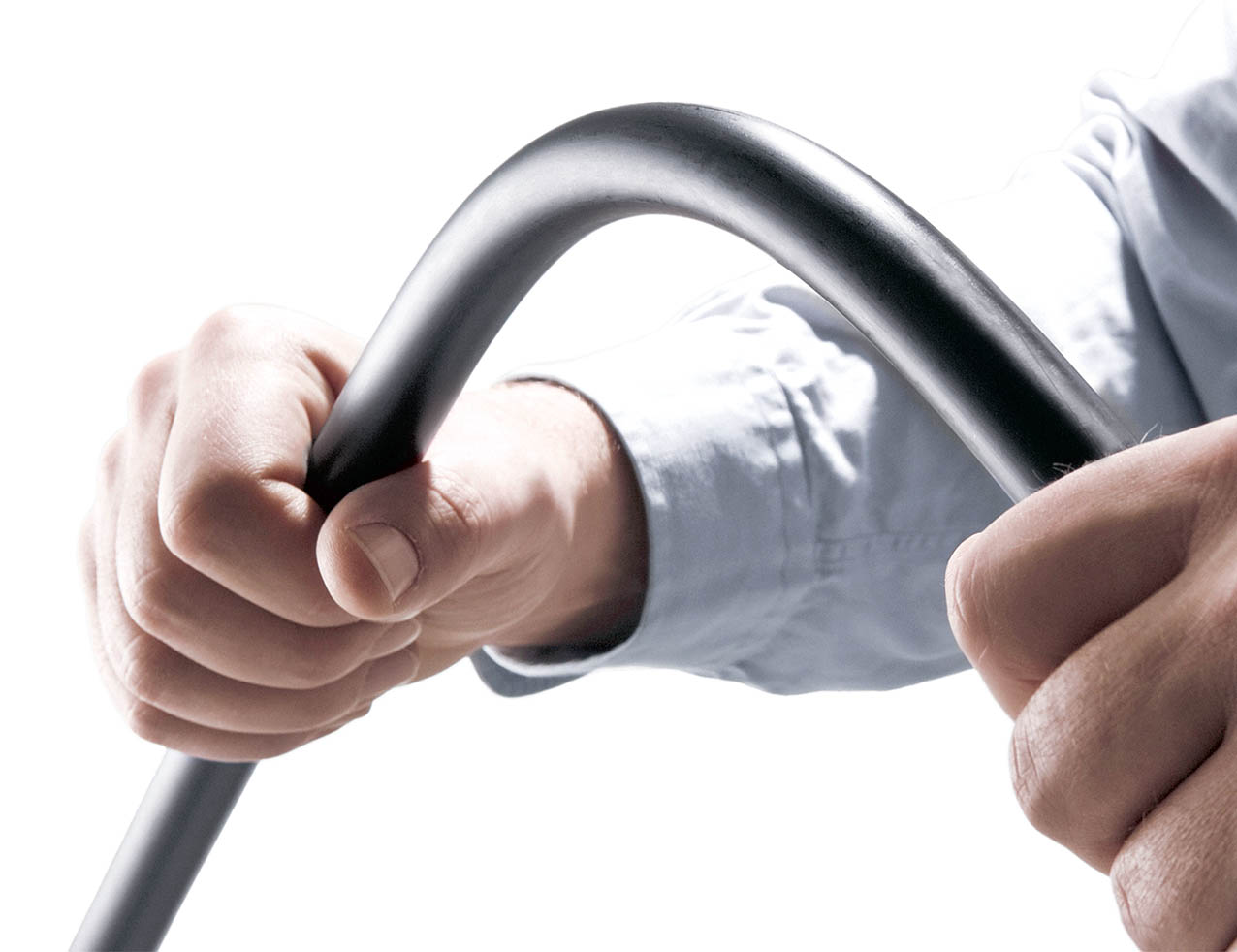 Figure 2: Smaller diameters may be bent by hand (Source: Geberit)

The homogeneously longitudinally welded aluminium layer maintains the pipe integrity and allows it to bend equally well in all directions. The aluminium layer also improves the pressure resistance of the pipework, as well as making the pipe more stable compared with simple flexible plastic pipes.

The ductile aluminium layer offsets the inherent ‘shape memory’ of the plastic layers – which, otherwise, can cause recurling of uncoiled pipe – while, at the same time, reducing the sagging that can take place in completely plastic pipes.

The outer plastic layer protects the aluminium layer, preventing corrosion and pitting on the aluminium surface. The inner plastic layer of multilayer pipes has an absolute surface roughness of approximately 0.007mm – similar to that of copper tubing and significantly lower than steel pipe.

For turbulent flow, as would be normal in building services applications, surface roughness will affect the pressure drop, particularly in small pipe sizes, and a relatively smooth surface resists the accumulation of contaminants, such as limescale, magnetite and biofilms.

In terms of the overall performance of the complete multilayer pipe, these are all similar, with safe operating pressures in the order of 10bar for most hot- and cold-water systems. (This compares with 30+bar for copper and 60+bar for steel systems.)

PE-X cannot be recycled, whereas PE-RT and HDPE are recyclable. Calculations1 undertaken by the European Plastic Pipes and Fittings Association indicate that the carbon footprint of multilayered pipework systems is substantially lower than comparative copper systems. 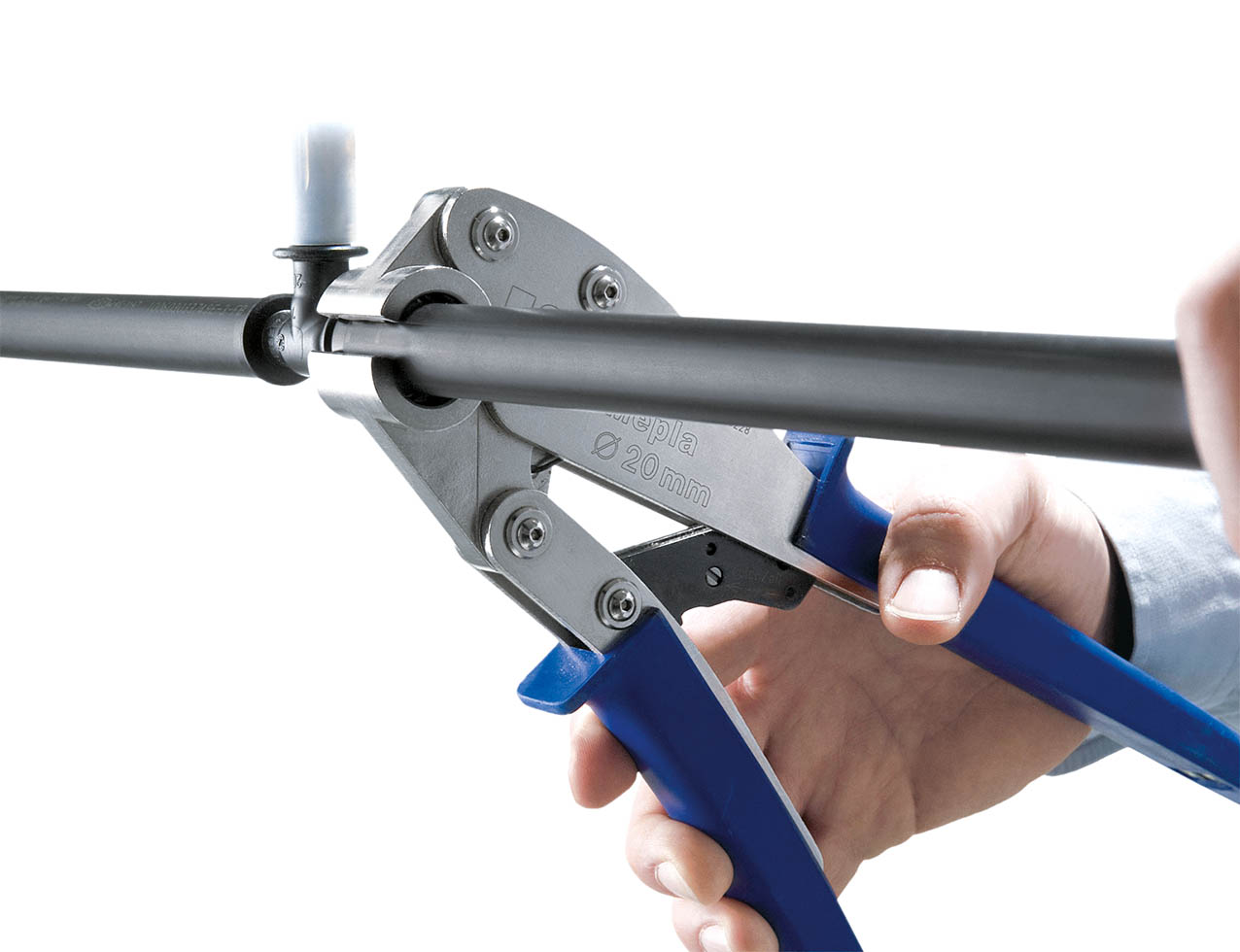 A significant advantage is that the pipes, depending on the manufacturer, are available in continuous rolls – and straight lengths – up to 32mm, as well in sizes up to 75mm outside diameter in standard straight lengths. Laying the pipe from continuous coils without joints eases the installation process by allowing pipes to follow circuitous routes, and reduces the opportunities for problems by using fewer fittings.

The weight of the pipes is substantially less than metal equivalents, with far easier handling, and so are commonly used in domestic and commercial applications that traditionally used copper pipe. In domestic and commercial applications, this typically includes heating, plus hot-, cold- and drinking-water systems. (Horizontal fixing centres are typically 30% closer than those for copper pipe.)

Although multilayer pipe is designed not to provide a continuous electrical conductor, the aluminium layer allows electronic detection of the pipe after installation.

Plastic pipework used in water down service and wholesome water applications do not need to incorporate an oxygen barrier; however, in domestic and small commercial installations it is common that, for site simplicity, the same multilayer pipe is used throughout many of the systems (although the basic material price is more expensive than simple non-barrier plastic pipe).

Smaller sizes can be formed by hand – typically with a minimum bend radius of approximately five tube diameters – without collapsing the tube, and larger dimensioned pipework (or tighter bends) formed with hand-operated formers or pipe-bending machines.

Using multilayer press-fit systems is considerably quicker than traditional metal installations in terms of preparation and connection. This is partly because the tube preparation is less labour intensive, it has fewer steps, and the component designs and installation methods help to ensure a leak-tight system. 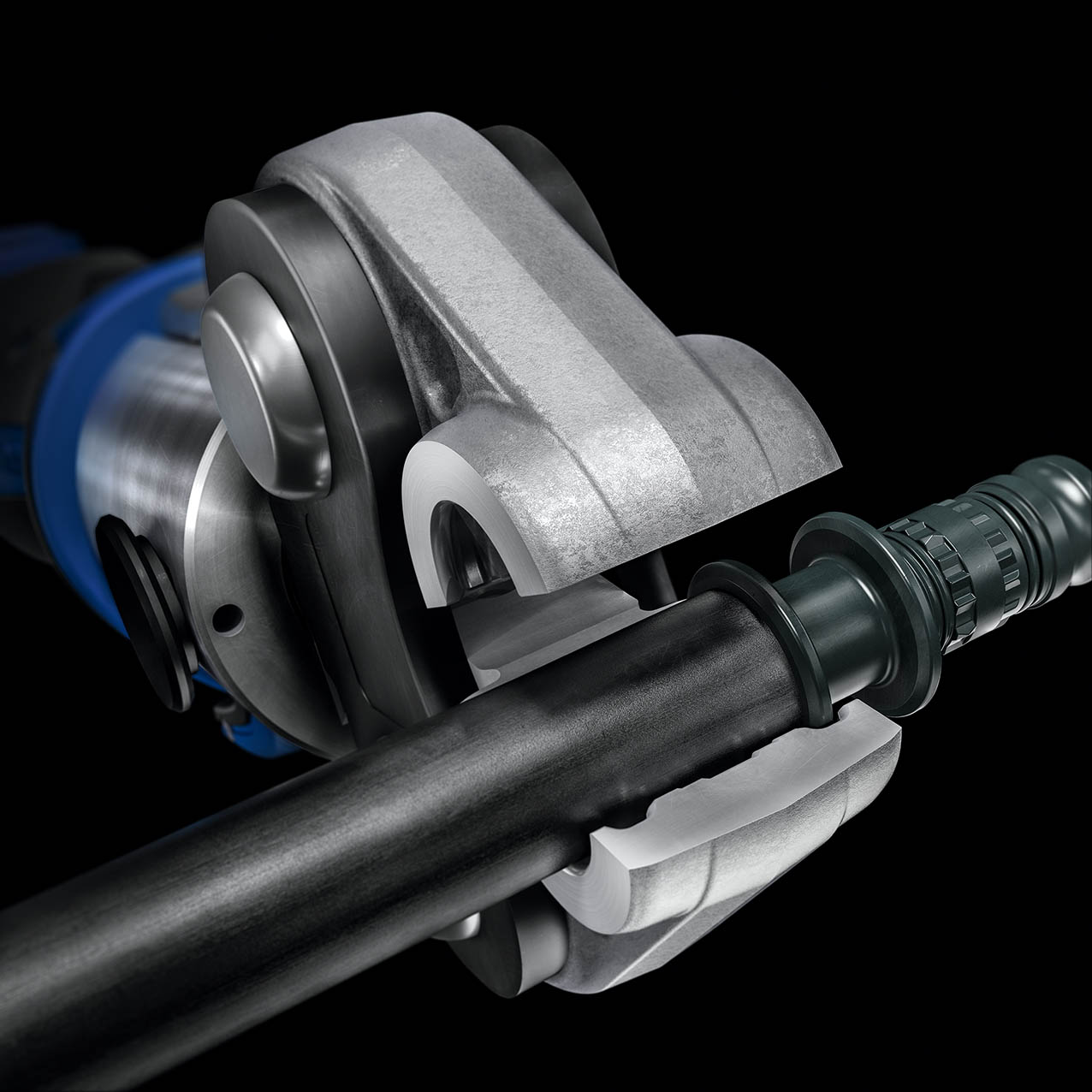 The fittings will typically include arrangements so that pressing tools – such as those shown in Figure 3 and Figure 4 – may only be used correctly, so reducing the opportunity for abortive pressings.

Depending on the manufacturer, the fittings are made of a variety of materials, including plastic, brass and stainless steel, with many incorporating components to ensure fast and effective connections, as well as providing positive indication that the fitting has been locked onto the pipework.

For a pipe system such as that shown in Figure 1, when the pipe is pressed, the inner plastic tube makes the water seal with the O-ring, and the fitting permanently secures the pipe from being pulled out or rotated. The cutting and connection of these systems is clean, with no consumables and little mess to clean up afterwards.

Pressing or crimping, when completed correctly, produces a robust connection that is leakproof and mechanically sound. Fittings that have been mistakenly left unpressed are typically designed to leak visibly when subjected to low-pressure leak tests, as shown in Figure 5, so that any pressure test cannot be completed successfully until all the connections have been pressed.

Any modern plumbing and heating systems will have a mixture of different metal and plastic components. Although multilayer pipework and fittings systems are generally corrosion-proof or corrosion-resistant, consideration must be given to the remainder of the system.

Systems that contain components made from materials that can corrode in poor water-quality conditions or under poor pressurisation (resulting in air ingress to the system) must still be designed and maintained using standard methods. Connections to other equipment will often be made with metallic components (usually a type of brass or gunmetal).

Standard flushing techniques and pre-commissioning would follow best-practice guidelines (such as CIBSE Commissioning Code W), taking account of the reduced exposed surface of metallic surfaces, but still ensuring that no inadvertent damage is caused to other metal and plastic components within the system.

All multilayer pipe manufacturers provide expansion coefficients to allow for accurate calculation methods when working with the material. Allowing for expansion will depend on several variables, which include: temperature of the medium running through the pipe; ambient conditions; locations of branches and bends; and where anchoring brackets may be located.

A significant advantage over solid plastic pipes is that multilayer pipe has reduced thermal expansion, with the intermediate aluminium layer maintaining the expansion rate to about 10% of that of a solid PE-RT pipe. Practically, this would mean that a multilayer pipe would expand 2mm for every metre run as its temperature rises from 0°C to 80°C.

This compares with 0.9mm per metre for steel pipe and 1.4mm per metre for copper pipe. In the same way that expansion is accommodated in copper and steel pipework systems, there are several techniques that can be employed for long lengths of multilayer pipework – typically through specific bending loops or legs, or by allowing some free movement by design.

Multilayer pipe does not normally provide an electrically conductive pipe system, so cannot be used for equipotential bonding and does not require earthing. To ensure that there is no opportunity for electrolytic action between the aluminium and other metals in components and fittings, the design of coupling fittings must incorporate some form of barrier to ensure that there is no electrical conduction between the pipe system and the fitting.

Corrosion of the outer surface of the aluminium pipe is only likely to occur if the pipes are laid in an aggressive or permanently damp environment, such as swimming pools, production areas with acids or alkalis, and those with permanently wet or condensing environments.

The corrosion risk would be to the unsheathed, open cut-pipe sections. In such circumstances, corrosion protection must be provided, such as by using rubber collars, sealing tape or other suitable manufacturer-recommended methods

Measures to protect against corrosion are not required if the pipes are equipped with a continuous anti-condensation, or thermal, insulation and so protected from permanent moisture. As with most plastic materials, the pipe should be protected from continued full exposure to direct sunlight to prevent long-term degradation of the plastic material.

Manufacturer data is key to interpreting the specific characteristics of different PAP systems.

CIBSE AM14:2010 section 4.3.7 gives an introduction on thermal expansion of pipework.