This CPD will consider the drivers for the proposed 2020 revisions to regulations governing the environmental performance of homes. This article principally considers areas that are associated with the thermal building regulations.

This was based on the goal to limit global warming to ‘well below’ 2K above pre-industrial levels by the end of this century – a limit that had gained popularity following economic modelling reaching back 40 years by 2018 Nobel economic science prize winner William D Nordhaus. The UK, responsible for about 1.55% of global emissions, had already set a target of 80% emissions reduction in the Climate Change Act 2008, and this was the driving force behind compliance targets within the built environment.

Subsequent international research on the impact of climate change confirmed that small island states and low-lying countries would be inundated with sea water as higher temperatures caused more ice to melt and the seas to expand. Preventing global temperatures from rising beyond 1.5K would significantly improve their outlook.

The IPCC Special Report on 1.5oC,2 released in December 2018, effectively confirmed that the target must be a much more demanding 1.5K. As a result, the UK Climate Change Act was amended in June 2019 so that the net UK carbon account for the year 2050 is set to be ‘at least 100% lower than the 1990 baseline’.

To determine how the UK can achieve this target, the UK government, in conjunction with the Scottish and Welsh Governments, commissioned research into what measures will be required to contribute to net-zero homes by 2050.

The results showed that for the UK to achieve the new goal, many of the solutions cut across the multitude of contributing systems, and that ‘fully integrated policy, regulatory design and implementation is crucial’.3

Each government is looking to update the Building Regulations to set stricter compliance targets on the construction industry. Homes account for 20% of greenhouse gas emissions in the UK,4 and this has provided the focus for the first set of consultations on future building performance legislation.

The UK government’s first-stage consultation on the path to develop the England Future Homes Standard closed in February 2020, and principally focused on updates to Approved Documents Part L (Thermal) and Part F (Ventilation) of the Building Regulations for new residential developments. These are intended to encourage market and supply chain development, while representing a significant improvement on 2013 compliance.

The consultation on the England Future Homes Standard presents a view of how government envisages residential buildings in 2025, and shares technical foundations with the Welsh Government’s near concurrent consultation on the Approved Documents Part L and Part F of the Building Regulations in Wales. The 2020 revisions to Part L and Part F are positioned as a ‘meaningful and achievable‘ stepping stone to the 2025 standards.

It is proposed that new developments meeting the future 2025 regulatory requirement would produce 75- 80% less carbon dioxide emissions than those built to the 2013/14 Part L requirements. To achieve this, the final specification is likely to include low carbon heat technologies, such as heat pumps; waste-water heat recovery; and triple glazing and minimum standards for walls, floors and roofs that limit heat loss – potentially augmented by building-integrated photovoltaic (PV) power generation.

The expectation is that with a future decarbonised electricity Grid, homes built to the meet the 2025 standards will become net-zero carbon over time, with no need for further adaptations or changes, as they will not be reliant on fossil fuels for their heating. 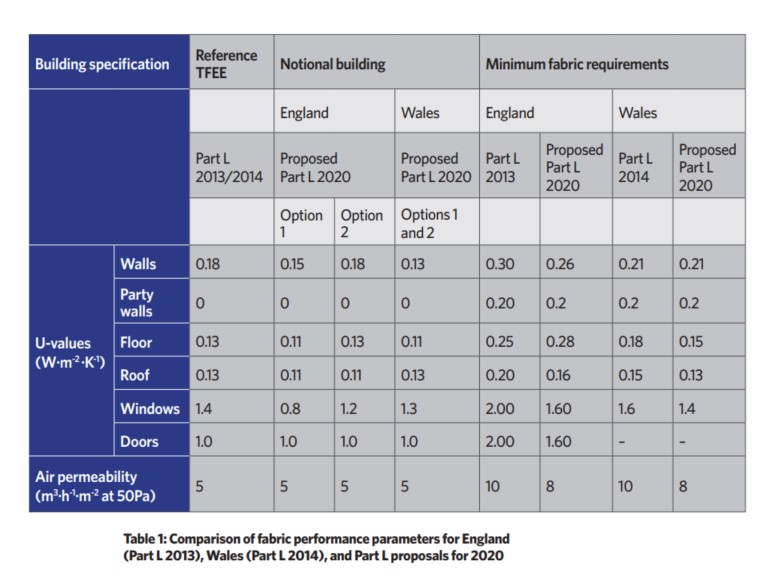 The consultation documents introduce a notional building design – including example heating methods and fabric – that is used to provide a performance target for compliance with the building standards, primarily in terms of Target Emission Rate (TER) and Target Primary Energy Rate (TPER), so as to align with those of the EU Energy Performance of Buildings Directive and determined through a calculation by SAP 10.1 (consultation version of the standard assessment procedure).4

Thermal bridging values (tabulated in table R2 of SAP 10.1 documentation5) are given for the two options (with many Option 1 ‘psi’ junction heat loss values below those of Option 2). Compared with the previous values (SAP 2012 Table K1) the psi values are most significantly reduced in specific elements creating junctions with the external fabric (such as at lintels, eaves and gables). The notional reference buildings all incorporate large (low temperature) radiators.

Conformance of a design is primarily determined in terms of not exceeding the emissions and primary energy consumption of the notional building, while also keeping within the limiting U-values and air permeability set by the proposals.

The Target Fabric Energy Efficiency (TFEE) rate of the previous incarnation of the regulations has been edged out by the modest improvements in the minimum standards for fabric performance, and is replaced by the total notional building performance (which includes a combined fabric and system performance).

This has caused some concern – including in official consultation responses from CIBSE,6 RIBA7 and the Mayor of London8 – as improvements over earlier standards using this technique may be largely delivered through changes in carbon factors (of the energy supply) rather than improvements to building performance itself.

However, compliance requires meeting the targets for both the emission rate as well as the EPBD-compliant primary energy use, so as to provide a measure to limit the opportunity for thermally ineffective fabric designs.

The 89.5% SEDBUK condensing gas boiler that is used in all options of the notional base case has caused some debate, as its inclusion might inadvertently normalise a natural gas boiler as being considered a ‘low carbon’ heat source – this is, of course, not the intent.

The ambition of the 2025 Future Homes Standard is to futureproof the design of new dwellings, and although other fuels – such as from a decarbonised gas network – may have a role to play in the future of heat, the emphasis appears to be mainly on electrical energy and heat network schemes.

However, as identified in the Welsh consultation, ‘the significant transition to low carbon heat requires the market for technologies such as heat pumps, as well as those qualified to install these technologies, to be significantly developed’.

This is somewhat echoed in the CIBSE feedback6 to the Future Homes Standard consultation extolling that ‘heat pumps are designed, specified, installed and operated correctly to deliver energy and carbon savings, and avoid high bills for the consumer’.

The proposals also include a ‘householder affordability rating’ to prevent potential use of inappropriate – and possibly low capital cost – systems that then burden the occupier with high running costs. The details of this rating have yet to be developed.

The proposals for the 2020 England regulations presents two alternative options for consideration. Option 1, ‘Future Homes Fabric’ and Option 2 ‘Fabric Plus Technology’, with target reduction in carbon emissions compared with 2013 standards of 20% and 31% respectively.

Since the notional building fabric parameters (summarised in Table 1) are less demanding for Option 2, the performance benefits of Option 2 must be delivered through the active building systems that will, in many cases, be reliant on the inclusion of a PV array to ensure compliance, particularly if a natural gas condensing boiler is used. (The Option 2 notional building includes a 6.5m2.kW-1p, PV array of an area equivalent to 40% of the building foundation).

There are many systems permutations that could meet whichever option is developed into the final standard from this consultation; many of the solutions would be likely to include heat pumps, as explored in the manufacturer example illustrated in HVAC Specification Under New Regulatory Standards.9 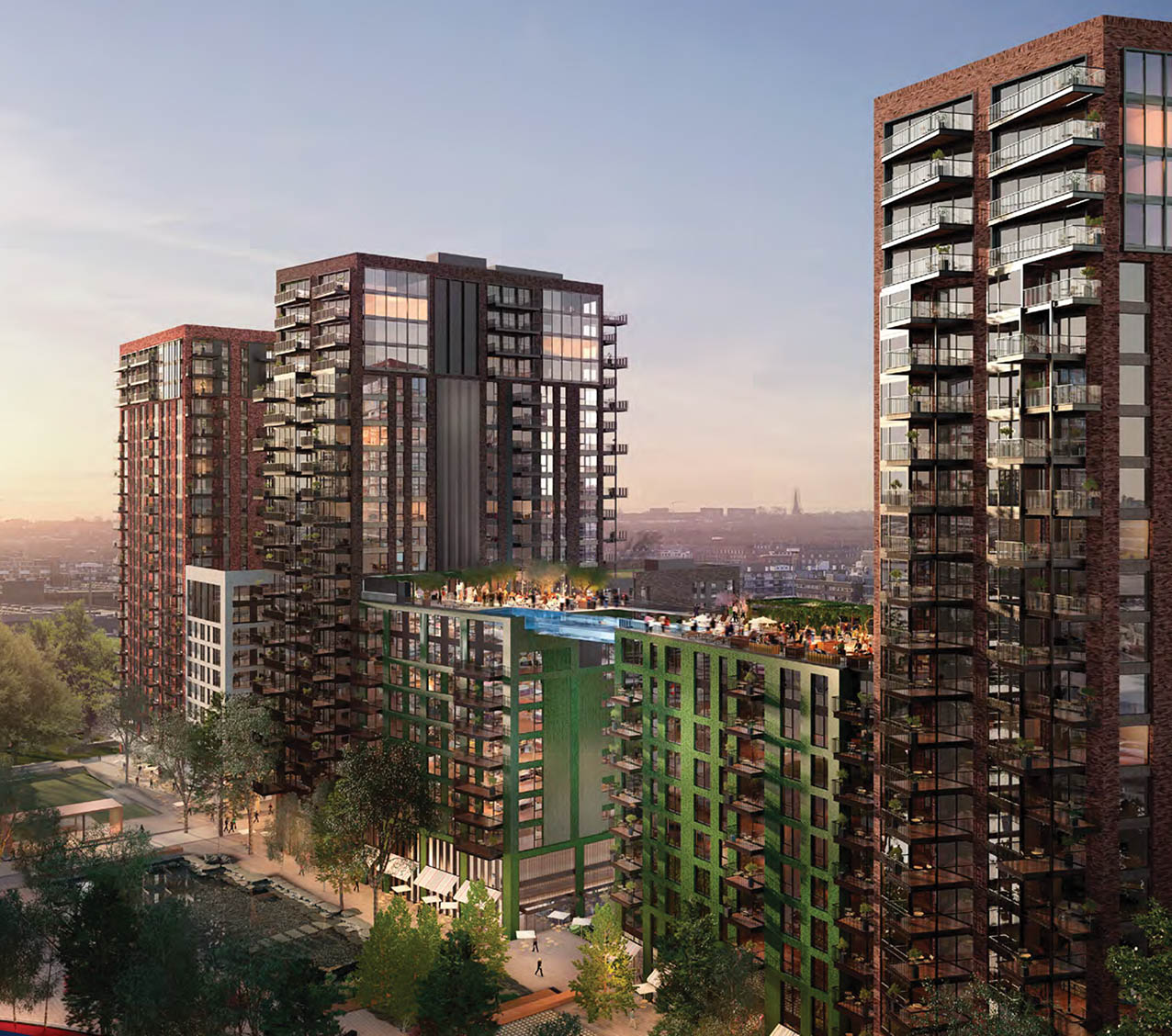 In December 2019, the Welsh Government published its proposal10 to update Part L and Part F of the Welsh Building Regulations. Wales is aiming for a 95% reduction in greenhouse gases from 1990 levels by 2050, as recommended by UK CCC.3

There are many technical and philosophical similarities between the consultation documents for the England Future Homes Standard and the Welsh Government’s consultation; however, the Welsh proposals are more ambitious.

It has two options for consideration – the first being a 37% reduction in CO2 from new dwellings, compared with the current standards, and the second requiring a 56% reduction. Both options maintain the same fabric standards (see Table 1), and both options include the same PV as in the England notional proposals for Option 2.

Regardless of the specifics of the notional buildings, the key message is that compliance with both the England and Wales proposals is based on meeting performance targets in reducing emissions and primary energy consumption.

Scotland is aiming to achieve net zero by 2045, five years earlier than England – in line with the UK committee on Climate Change (CCC) recommendations,3 which identified that Scotland has a greater relative capacity to remove emissions than the UK as a whole. Coincident with this, the Scottish Government has an extremely ambitious legally-binding target for 2030 of a 75% reduction in emissions compared with 1990.

The Scottish Government announced at the start of 2020 that regulations will be developed so that all new homes will use renewable or low-carbon heating from 2024.11 It might be reasonable to expect that the proposed update to Section 6 of the Building Standards technical handbook for domestic buildings, supporting the Building Regulations in Scotland, will be more challenging than proposals set by the central UK or Welsh Governments.

In the absence of an executive since January 2017, the Northern Ireland Department for the Economy ‘has been considering how to advance proposals for an energy strategy that will enable new and challenging decarbonisation targets’.

Northern Ireland recently closed a call for evidence12 as the first stage in the process of developing an energy strategy.

By the time the details discussed in this article become law – scheduled before the end of 2020 – the specific proposals are likely to change following collation and processing of comments resulting from the extensive consultation exercise.

However, no matter what the detail, the trajectory will be the same, as building operation heads towards a net-zero future.