Robust compartmentation and smoke control are critical in containing fire and protecting a building’s occupants and contents. The consequences of loss of compartment integrity has been tragically implicated most recently in the Grenfell Tower Inquiry: Phase 1 Report1 that, in the analysis of the expert evidence, suggests a number of factors will have contributed to the loss of effective compartmentation.

This CPD will specifically focus on the provision of fire and smoke dampers for ventilation systems that contribute to delivering a safer built environment by sustaining compartmentation. Oral evidence indicated that it was unclear whether smoke entering some of the lobbies through the dampers in the smoke control system was as a result of the fact that the system was designed to deal with a fire on only one floor, or whether there were non-compliances in the system which led to that smoke spread. The Phase 1 Report found no conclusive proof that there was an issue with fire and smoke dampers.

The control of smoke and containment of fire in the ventilation ductwork in any building are just two of the essential requirements for fire safety. Fire and smoke control systems must be designed, installed and maintained as part of a methodical, holistic and ongoing process. There are several relevant standards and guidelines – some of which have seen very recent updates – that, if properly considered, enable designers and operators to deliver safer systems. 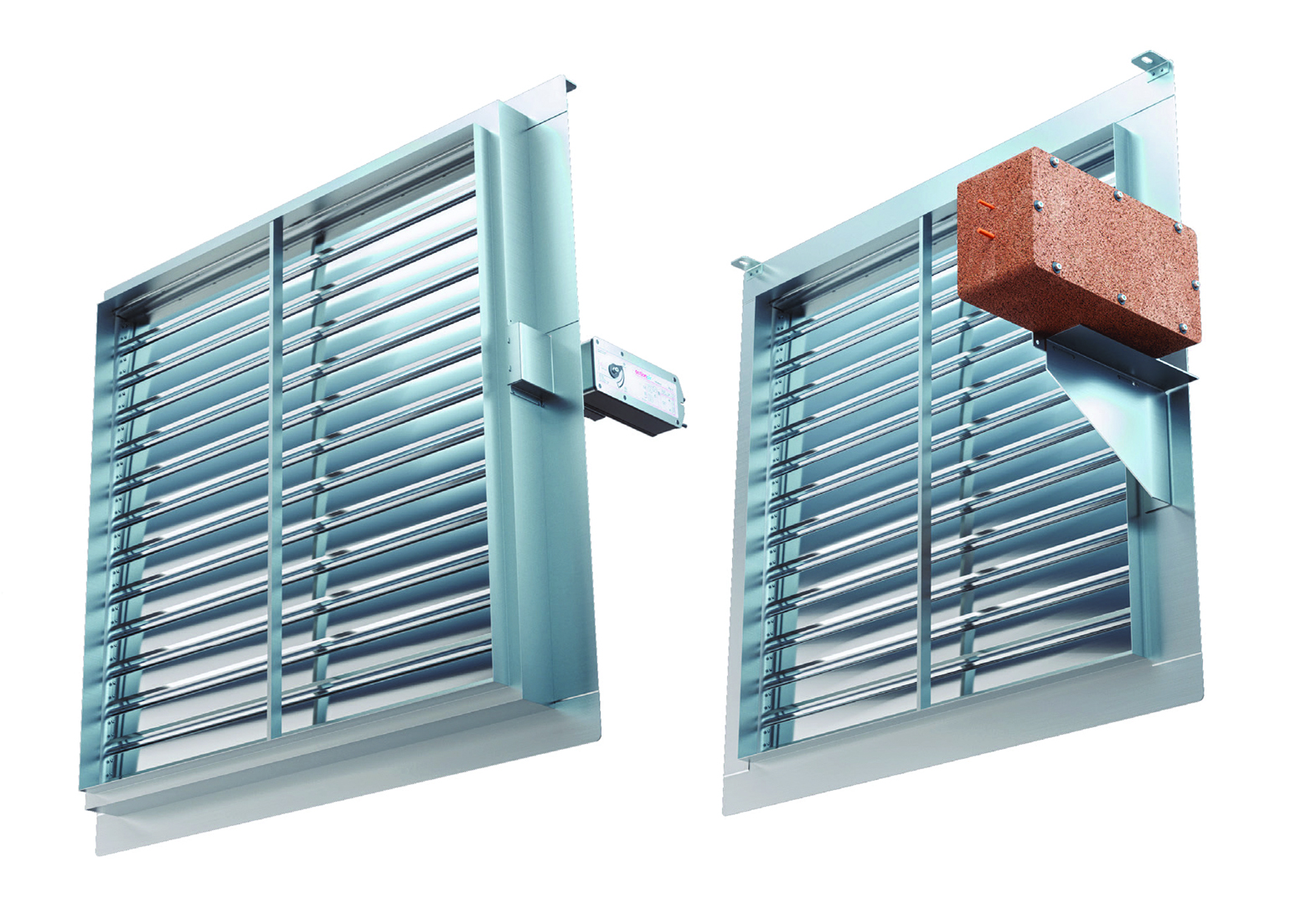 Referring to the 2019 CIBSE Guide E Fire safety engineering, for compartmentation to be effective, the enclosing boundaries – such as walls, ceilings and floors – must be able to resist the spread of fire. In terms of dampers, this requires that ducts penetrating fire-resisting boundary elements are provided with fire dampers (or that the ducts are also fire resisting), and that the stability of the structure supporting the fire-resisting boundary (and damper) must be maintained for the required period. Spaces that connect compartments – known as ‘protected shafts’ – such as stairways and service shafts, also need to be protected to restrict fire spread between the compartments. So, where ducted ventilation services could compromise the integrity of that compartmentation, fire dampers and smoke dampers can provide a controllable solution.

A fire damper’s primary function is to maintain compartmentation and prevent, or impede, the spread of fire through the ventilation ductwork. Fire dampers are designed to allow air to flow through in normal operation but then shut suddenly with a thermal release mechanism at the outbreak of a fire, and are designed to failsafe close. The release mechanism is a thermally actuated device designed to respond to a rise in temperature of the surrounding area and release the fire damper blades at a predetermined temperature. It can interface with mechanical, electrical, electronic or pneumatically operated mechanisms, which are positioned integrally or remotely from the device.

Fire dampers will resist the progress of the fire in the closed position and have a certified maximum leakage characteristic. The standard BS EN 1366-2 defines the requirements for testing dampers, with a requirement to close within two minutes of the test start. After closure, a 300Pa pressure differential is applied to the damper, and the damper leakage (corrected to 20°C) is recorded during the rest of the test.

The largest size of damper on the market must be fire tested. Pass and fail criteria are included in the standard in terms of:

Smoke dampers
The most significant risk for occupants in fires is smoke inhalation. So, when considering smoke and heat exhaust ventilation, an uninterrupted smoke extract path needs to be maintained between the area where heat and smoke is being generated and the outside of the building – this is facilitated through controllable smoke control dampers (often referred to as ‘smoke dampers’). 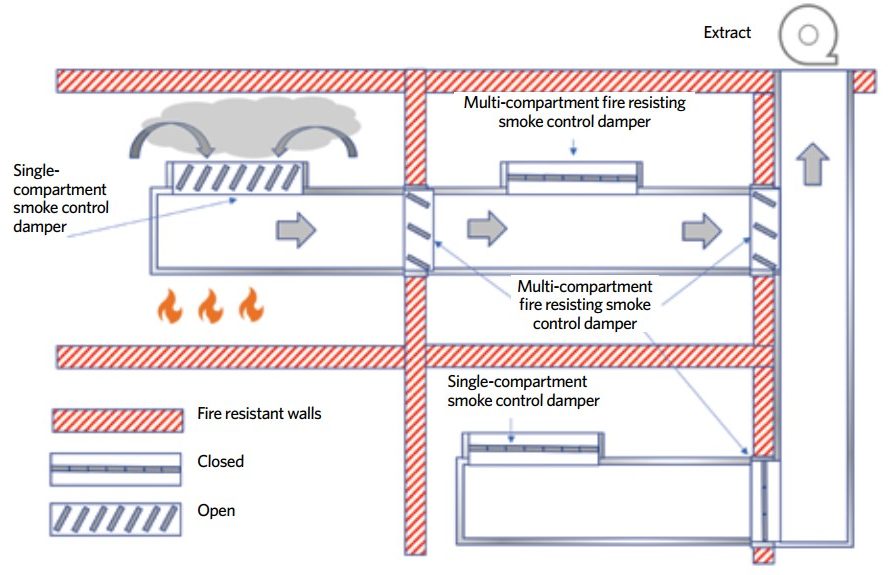 Figure 3: Simple example of the location of dampers for fire and smoke control for a basement application, with dampers set as if smoke is detected in the top left compartment (Source: Swegon)

A typical smoke control system with automatic activation and with manual override requires a damper that operates automatically on receipt of a smoke or fire alarm, without any manual action/intervention. In this application, once initiated, the system will allow the damper position to be changed by external input or firefighter’s override. Less common are smoke control systems that rely on manual intervention to be put into operation by people on detection of smoke or fire (for example, by pressing a button), leading to a sequence of automatic actions in the operation of the smoke control system. Such systems will still allow the smoke control damper position to be changed by external input/firefighter’s override.

There have been updates in 2019 to guidance that covers building fire protection, both in the Scotland Building Standards Technical Handbook, Part 2 and in the England and Wales Building Regulations Approved Document Part B. The revised guidance on fire dampers and ventilation systems in Approved Documents B1 and B2, which applies in England, has been consolidated into a single section (in both parts). The updated guidance has moved the guidance for the design of blocks of flats from B2 (Buildings other than dwellings) to B1 (Dwellings). Both sections illustrate guidance for the position of where fire and smoke dampers should be positioned – sometimes in conjunction with ductwork enclosed in a fire-resisting construction. Part B is clear that fire and smoke dampers should automatically operate when smoke is detected by a smoke detector or suitable fire-detection system. This might be through a dedicated damper control panel or building BMS to control the dampers that also provides remote testing and control, in addition to (application depending) allowing firefighter’s override of the dampers.

In common with other guidelines and regulations, AD Parts B1 and B2 indicate that the dampers should be securely fixed within the thickness of the fire-separating elements – this could be, for example, a compartment wall, compartment floor, cavity barrier or construction that encloses a protected escape route or a place of special fire hazard. The damper should be fixed so that expansion of the ductwork will not push the fire damper through the structure. Appropriate access to the fire damper and its actuating mechanism should be provided for inspection, testing and maintenance. Where ducts pass through fire separating elements between multiple dwellings, or where there is a sleeping risk, AD Parts B1 and B2 indicate dampers should normally be actuated by both smoke detectors and thermally actuated devices.

Smoke detectors should be sited so as to prevent the spread of smoke as early as practicable by activating the fire and smoke dampers. AD Parts B1 and B2 notes examples of ‘automatic release mechanisms’ that would automatically trigger that activation:

AD Parts B1 and B2 indicates more detailed information on fire dampers and/or fire and smoke dampers is given in the Association for Specialist Fire Protection’s (ASFP) Grey Book.3

The rules governing which dampers open/close and how they are controlled may be developed by examining the ‘cause and effect’. So, the building is divided into zones and the zones are normally mapped – for example, into a spreadsheet – and that map is used by to develop a coherent and logical fire and smoke control strategy to maximise the preservation of life. A simple example of the application of smoke control dampers for a basement smoke extract system is shown in Figure 3.

Dedicated damper control panels are normally capable of managing complex ‘cause and effect’ scenarios. Typically, the control can be integrated into the wider BMS that will allow scheduled damper testing and status alerts. Thermal protection is essential for the main control panel, interfacing electronics, network cabling, damper control panel and
the damper itself.

To develop the most effective deployment of dampers for fire and smoke control in ventilation systems, it is important to consider risks holistically and develop, and consider, the array of ‘cause and effect’ as early as possible in the design process. That information will drive specification, installation and operation of dampers, controls and actuators. For operational success, the specification should be critically assessed so that the systems maintain appropriate simplicity, ensuring that they not only protect life and property but also reduce the responsibility on firefighters of having to operate numerous override controls.

As with many of the specialist areas in building services, established manufacturers can provide experienced advice on the selection of appropriate equipment to meet the current, and changing, standards.

Curtain fire dampers: Interlocking blades which, when open, fold to the top of the assembly, providing the maximum free area in the airway. Blades held open with thermal release mechanism, normally rated at 72°C ±4K. The blades fall or are sprung to fill the airway to prevent the passage of the fire.

Intumescent fire dampers: These expand by intumescent activity under the action of heat to close the airway in order to prevent the passage of fire. The intumescent materials form the main component for fire integrity. In some instances, this may be supported by a mechanical device to prevent cold smoke leakage. The type of intumescent material selected will inﬂuence activation temperatures, and these temperatures typically range from 120°C to 270°C.

Multi-blade fire dampers: These are constructed with a number of linked pivoting blades contained within a frame. The blades are released from their open position by means of a thermal release mechanism, normally rated at 72°C ±4K. When the release mechanism is activated, the blades pivot and move to close the airway to prevent the passage of fire.

Single-blade fire dampers: These are constructed with a single pivoting blade within a frame. The blade is released from its open position by means of a thermal release mechanism, normally rated at 72°C ±4K. When the release mechanism is activated, the blade pivots and moves to close the airway to prevent the passage of fire.

Smoke control damper: These are single or multiblade dampers that generally have two positions: ‘open’ to allow smoke extraction or ‘closed’ to maintain the fire compartment.