Demand-controlled ventilation (DCV) is a strategy that is able to reduce building energy consumption while delivering good levels of occupant comfort. Most buildings regularly operate at occupancies below the design maximum, and can benefit from the ventilation being controlled to supply reduced flows that satisfy heating and cooling loads as well as meeting outdoor air requirements. This CPD will reflect on the state of current DCV systems and illustrate the potential application of the technology to a case study multi-use building.

The principles and controls that evolved to provide variable air volume (VAV) systems have been developed and refined to produce the modern DCV systems that not only control temperature (and humidity) but also optimise the supply air volumes – particularly outdoor air – so that appropriate levels of environmental quality ensure wellbeing while minimising energy costs.

The resulting installations can provide significant energy savings (compared with constant air volume [CAV] systems) because of reduced fan power and reductions in heating and cooling of the ventilation air. Digital control, and increasingly wirelessly connected components, use distributed sensors and motorised air volume control dampers with linked optimising controllers to provide environments that account for the presence of occupants as well as meeting the individual zonal comfort requirements.

Many applications, including offices or schools, are almost never fully occupied, and it is unlikely that the peak design occupancy occurs simultaneously in those occupied rooms. Studies1 have shown that, in cellular offices, typically fewer than 50%-65% of rooms in an office block are occupied concurrently and the ‘normal’ peak may only reach 75%-84% of all offices.

With a CAV system the airflow rate is kept constant, while with a DCV system it is modulated to meet the actual demand. The energy saving potential of a DCV system will depend on:

■ The variation in, and periods of, occupancy and use of the rooms

■  The minimum flowrate required and its relation to the design airflow rate of the system. This will depend, for example, on the number of rooms, the base ventilation rate in these rooms and the minimum airflow rate (the ‘turndown’) possible with the airflow control devices

■ The chosen indicator for indoor air quality control. For example, if airflow rates are controlled by simple occupation (or building use) sensors, then the airflow rate in the room is likely to vary in just two steps: minimum and maximum, resulting in higher overall airflow compared with alternative active measures of occupancy or building use, such as carbon dioxide (CO2) or volatile organic compound (VOC) levels.

■ The availability of global intelligence. Where systems are connected with internet-based resources, this can feasibly include whole system control and supervision that is influenced by information provided by – for example – weather and environmental forecasts, energy tariffing, and cloud-based, manufacturer-linked, condition-based monitoring. 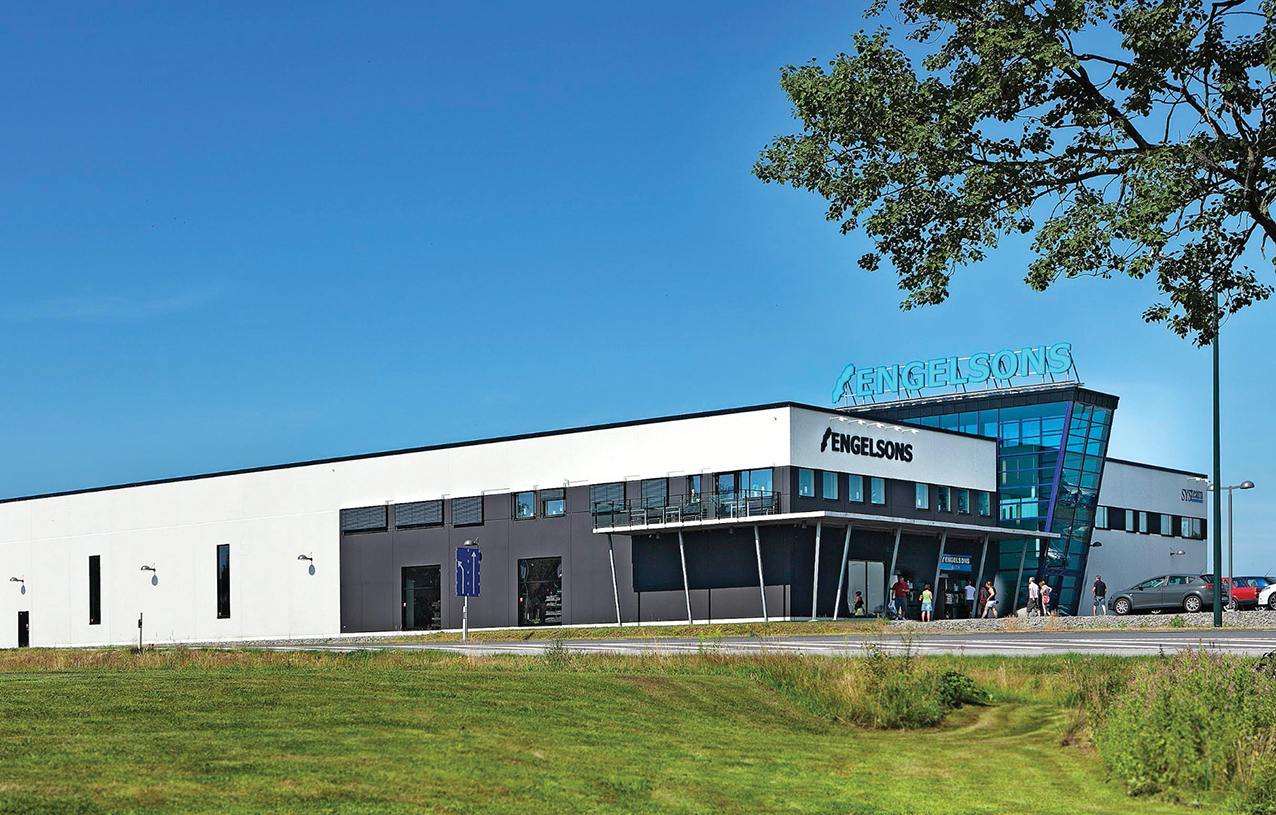 A case study investigation2 was undertaken by Swegon and the University of Padua to investigate the potential operational benefit of applying DCV.

The Engelsons building located in Falkenberg, Sweden, constructed in 2009, was used as the basis of an investigation to determine whether there were potential total operational benefits from the adoption of DCV compared with a simple CAV system.

The 2,200m2, two-storey building was chosen for its mixed use, incorporating offices and retail with a packing area and a separate warehouse (which was outside of this study). The building was monitored, and a computer thermal model created and calibrated so that it provided a solid base for comparative system simulations.

Unusually for such a building in Sweden, the building is not connected to district heating and is fully electric. Three sub-areas of the building – ground floor retail area (439m2), ground floor packing area (514m2) and first floor open-plan office (481m2) – were monitored for more than two years. 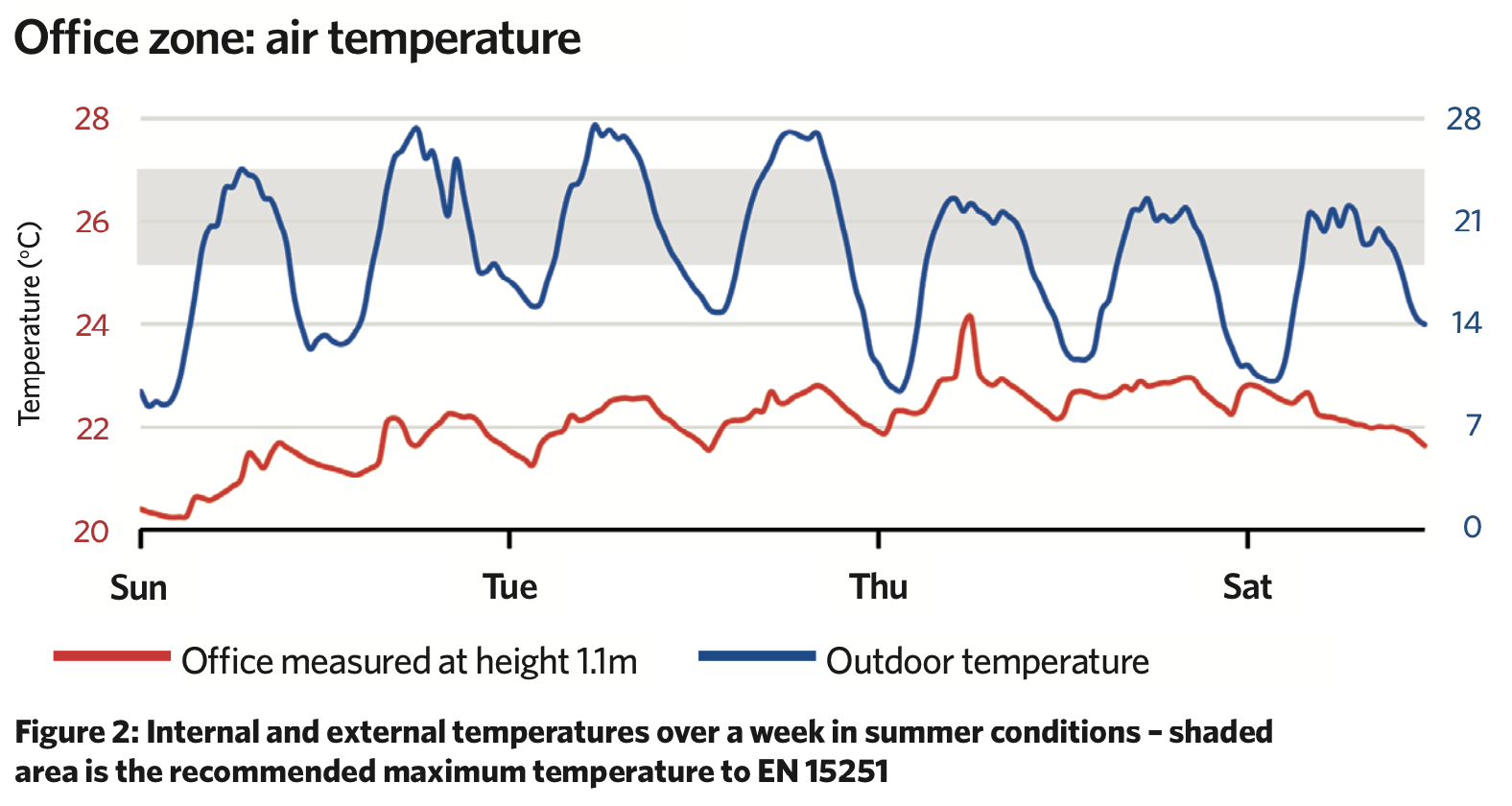 The air handling unit (AHU) control system provided recorded measurements of temperature, relative humidity, pressures and airflows, and distributed logging devices were used to monitor the temperature and humidity of various spaces. Over the period of data collection, the monitored flowrates were reasonably consistent (aside from a step-change in supply airflow rates following some unreported systems changes to the packing area and some periods where data was lost).

The area was served by what was fundamentally used as a CAV system, but with the facility for local-boosted airflow, so effectively having the facility for VAV to increase the amount of air supplied – though this was not used during the monitoring period. Fortunately, the period of monitoring was sufficiently long that a full year’s operational data could be extracted and linked up with the actual weather data for that same period. The investigating team selected weeks where the external temperatures were at the most extreme, to determine how well the systems controlled the spaces compared with the requirements of EN 15251,3 as shown in Figure 2 for the ‘summer’ condition.

The comfort conditions were evaluated using long period comfort (LPC) – the cumulative hours over the period of each month that occupants have been outside of their comfort boundaries (as set by EN 15251).

The method that was employed is explained in annex F method C of EN 15251, which employs predicted percentage dissatisfied (PPD)-weighted time, where the time during which the actual predicted mean vote (PMV) exceeds the comfort boundaries is weighted with a factor that is a function of the PPD. The guidance4 is that the PPD-weighted time of exceedance should not be greater than 150 hours per year. 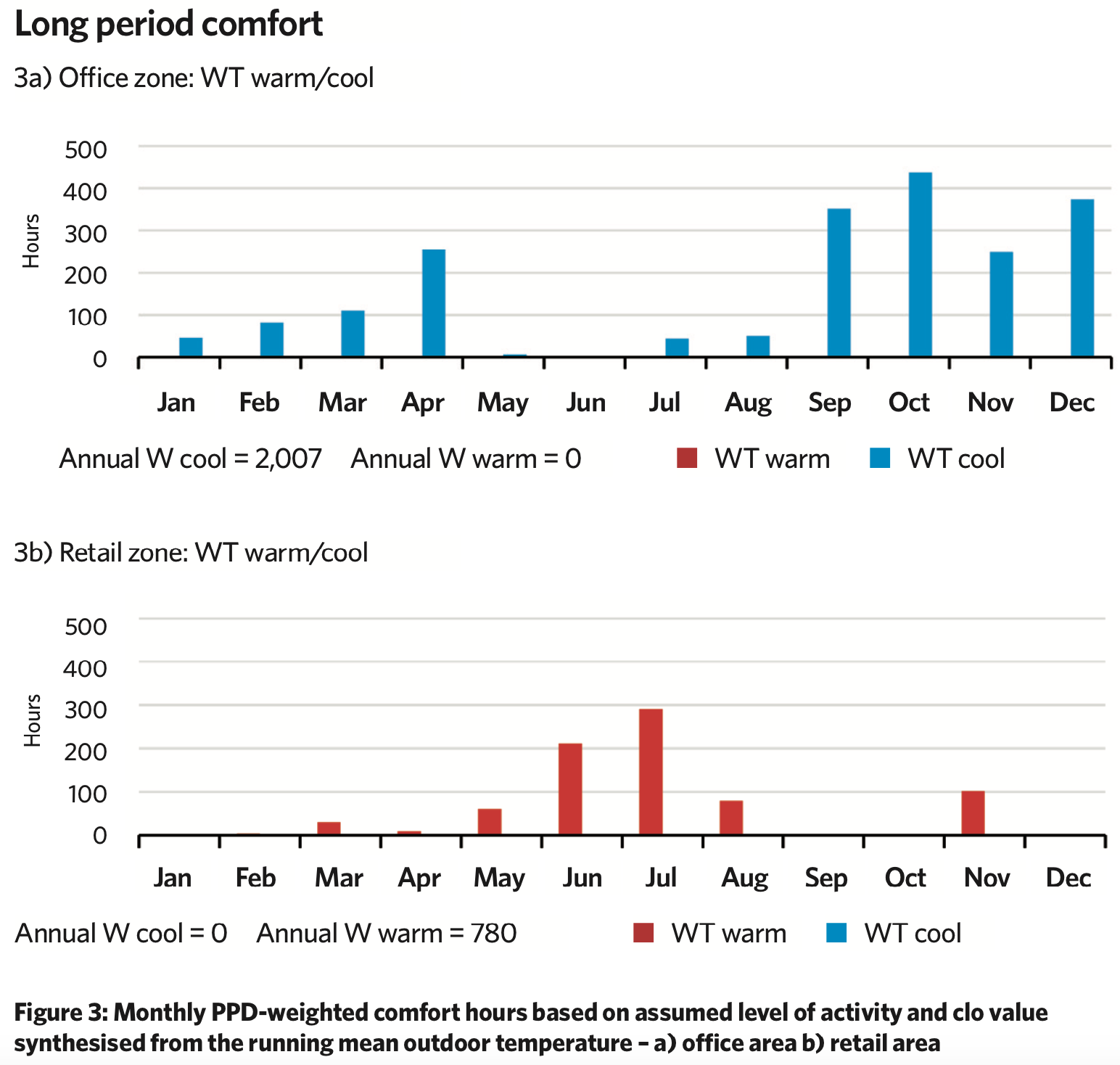 However, considering the results of these evaluations (as shown in Figure 3 for the office and retail areas), the office has 2,007 PPD-weighted hours of being too cool and the retail area 780 PPD-weighted hours of being too warm. The researchers reported that the occupants of the office areas were able to control the temperature of their environment, and considered that this apparent comfort anomaly may be accounted for by the influence of adaptive thermal comfort and that this particular population of office users prefer cooler environments. However, they were clear that more investigation was needed (although this was not undertaken in the study).

The building energy use (calculated from the AHU collected data) was assessed and compared with benchmark values. The office and retail areas had annual energy use (electric – fan, heating and cooling) that was considered reasonable (at just over 40kWh·m-2). However, the packing area’s was just 7kWh·m-2. It was subsequently determined that the packing area was originally designed as a storage area (with nominal background heating demand), and a supplementary fan coil heating system (which was additional to the monitored systems) had been added so that the area could be used as an occupied space. (This retrofit action was also latterly identified as the cause of the step-change in the monitored supply airflow rates.) 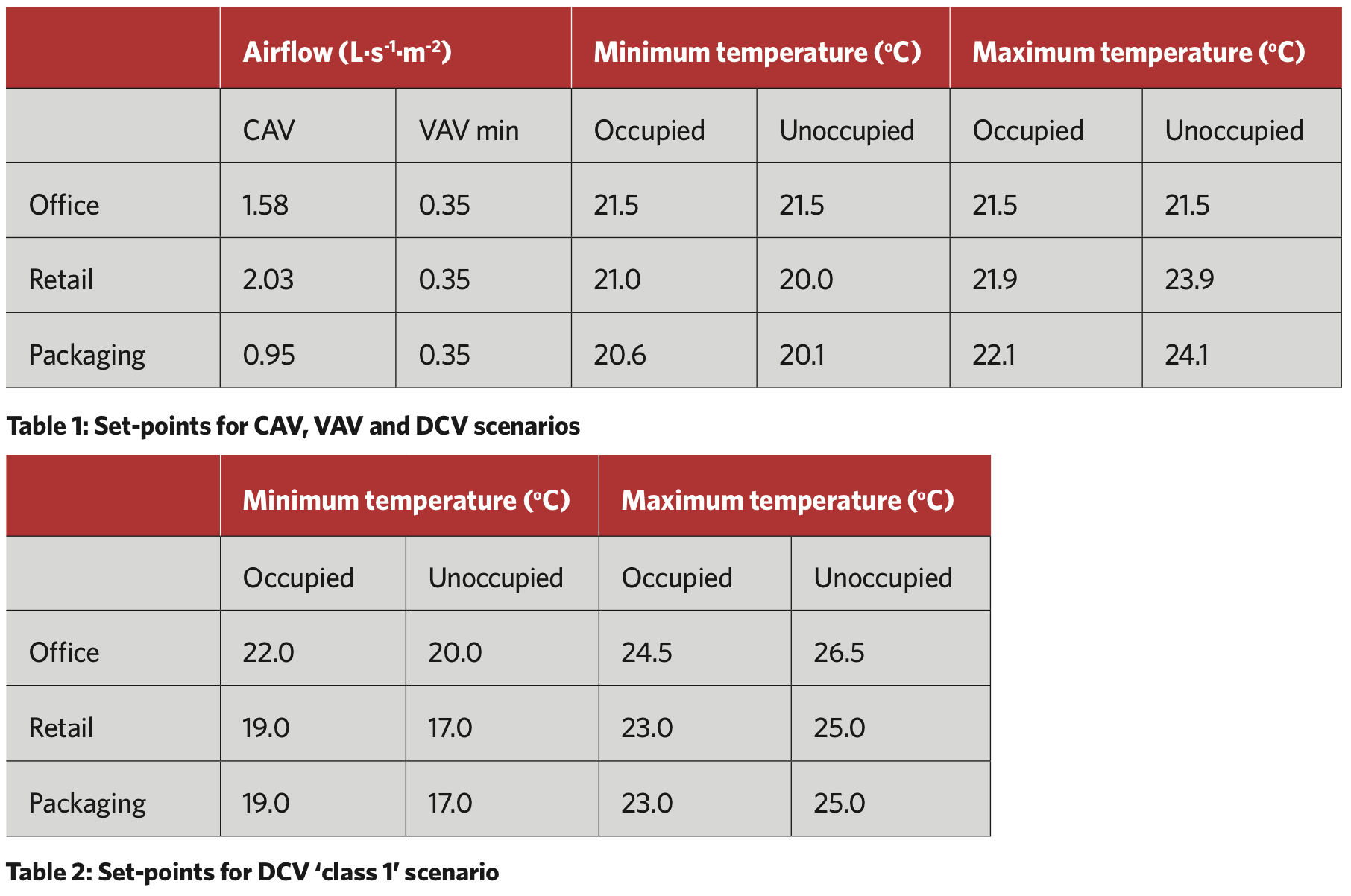 Along with the building fabric and operational information, the adjusted energy data (taking account of the packing area alterations) was used to confirm a ‘base case’ building thermal model for CAV. Using the now-calibrated model, the team investigated three further scenarios.

One of the significant changes implemented by the scenarios was that there would be controlled temperatures in the spaces – this would overcome not only the overheating as shown in Figure 3b, but also – and possibly more controversially – remove the individual control that previously provided the ‘over-cooled’ offices of Figure 3a, to maintain them at design temperatures no higher than those specified. 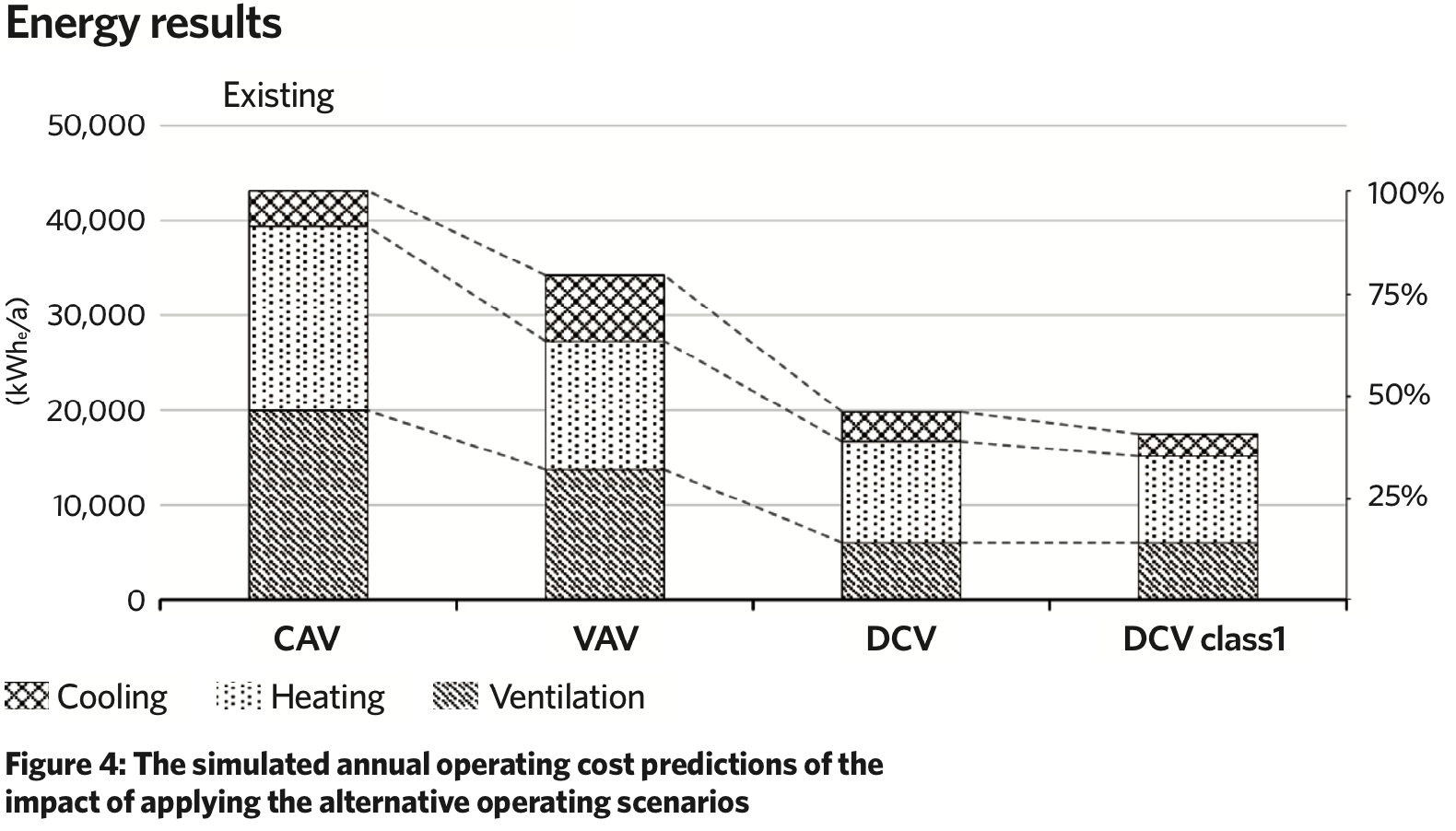 The DCV ventilation rate was determined by modelled occupancy, and was between 0.35L·s-1·m-2 and the maximum (CAV) rate.

A DCV ‘class 1’ system was modelled with the alteration of the indoor temperature
set-points to those of class 1 comfort conditions, as provided by EN 15251, as shown in Table 2.

The results of the scenario simulations are shown in Figure 4, and in this case study the implementation of the DCV produced a predicted operational energy saving of more than 50% compared with the simple CAV system.

When considering such an application in a new construction, there will be an impact on capital costs for which there is likely to be an overall additional cost. There will be a reduced size for the AHU as well as the main distribution ducts. However, there will be a need for extra equipment to control the air volume flowrate to the various areas and to ensure good air distribution at reduced flow.

The additional investment was estimated by the research team as being an extra 10% and so, in this case, the payback was calculated as less than two years. An improvement in comfort (and potentially a productivity increase) is likely from the enhanced monitoring and control of the internal space, reducing both the building’s environmental impact and operating costs – so potentially making the property more marketable.

(The team also continued in their analysis to show that by using heat pumps, there were even greater reductions in operating costs that readily exceeded the benefits of using traditional district heating.)

DCV systems have the potential to provide a significant reduction in energy usage when compared with systems with a constant airflow rate, while also achieving good levels of occupant comfort. However, to realise this potential to lower building environmental impact and reduce life-cycle cost requires realistic design that properly accounts for the variability in the specific application.