The significant role that the built environment can have in improving health, wellbeing, comfort and cognitive performance has prompted the current revision to the CIBSE Technical Memorandum 40 Health Issues and Wellbeing in Building Services. A key element of ensuring occupant wellbeing is to provide an appropriate visual environment. This article will consider the parameters sensed by the human eye and the impact of artificial lighting that contributes to the wellbeing of occupants.

The visual receptors in the human eye comprise of around 100 million rods and five million less sensitive, but faster response cones in the retina (as illustrated, in part, in Figure 1). The densely packed cones provide photopic vision for light at high intensities. Mesopic vision incorporates the range of light levels where signals from both rods and cones contribute to vision across a factor of 1,000 in luminance from the lower threshold of the cones up to the point where the rods are saturated with light (see Figure 2). This includes the levels that are often experienced in working environments, and where the spectral composition has a significant impact on the relative strengths of rod and cone signals. In dim light, scotopic vision takes over, integrating the light received by the rods as peak visual sensitivity shifts towards the blue end of the visible spectrum.

The candela, cd, measures the visual effect of optical radiation and is unique in being the only SI base unit that is related to human perception. Originally based on a ‘standard candle’ a candela is now defined by the luminous power emitted by radiation of frequency 540 x 1012 hertz (the green-yellow region of the spectrum, where human vision is most receptive) that has a radiant intensity of 1/683 watts per steradian, sr. (The surface area of a sphere with radius r is 4πr2, and so, as a sphere is 4πsr, the surface area of 1sr is r2 or around 8% of a sphere’s surface area.) For a particular lamp, the luminous intensity, measured in cd, will be dependent on the position of the viewer.

The lumen, lm (also cd·sr), is the luminous flux emitted within one steradian by a point source having a uniform luminous intensity of 1cd.

Although a lamp will have many position-dependent values of candela, it will have only one lumen output, which will depend on the type of source and spectrum of light and will be the sum of all measured values of individual values of (cd x sr) around the sphere.

Illuminance on a plane is represented by lux, lx (also lm·m-2). So, for example, typically for task areas in offices, this would be either 300lux for mainly screen-based activity or 500lux for mainly paper-based work.6

Vision for night activity is likely to be in the mesopic range, with the peak being somewhere between yellow-green and blue-green.1 The intrinsically photo-sensitive retinal ganglion cells (ipRGCs) are located in the first layer of the retina but are not linked to vision. Alongside other inputs, the signals from the ipRGCs affect the master circadian clock – the part of the brain known as the suprachiasmatic nucleus – so influencing alertness and preparation for rest. The response of the ipRGC receptors, and therefore the impact of light on physiological processes, is strongly influenced by the spectral composition of light – their peak sensitivity is in the blue area of the light spectrum. 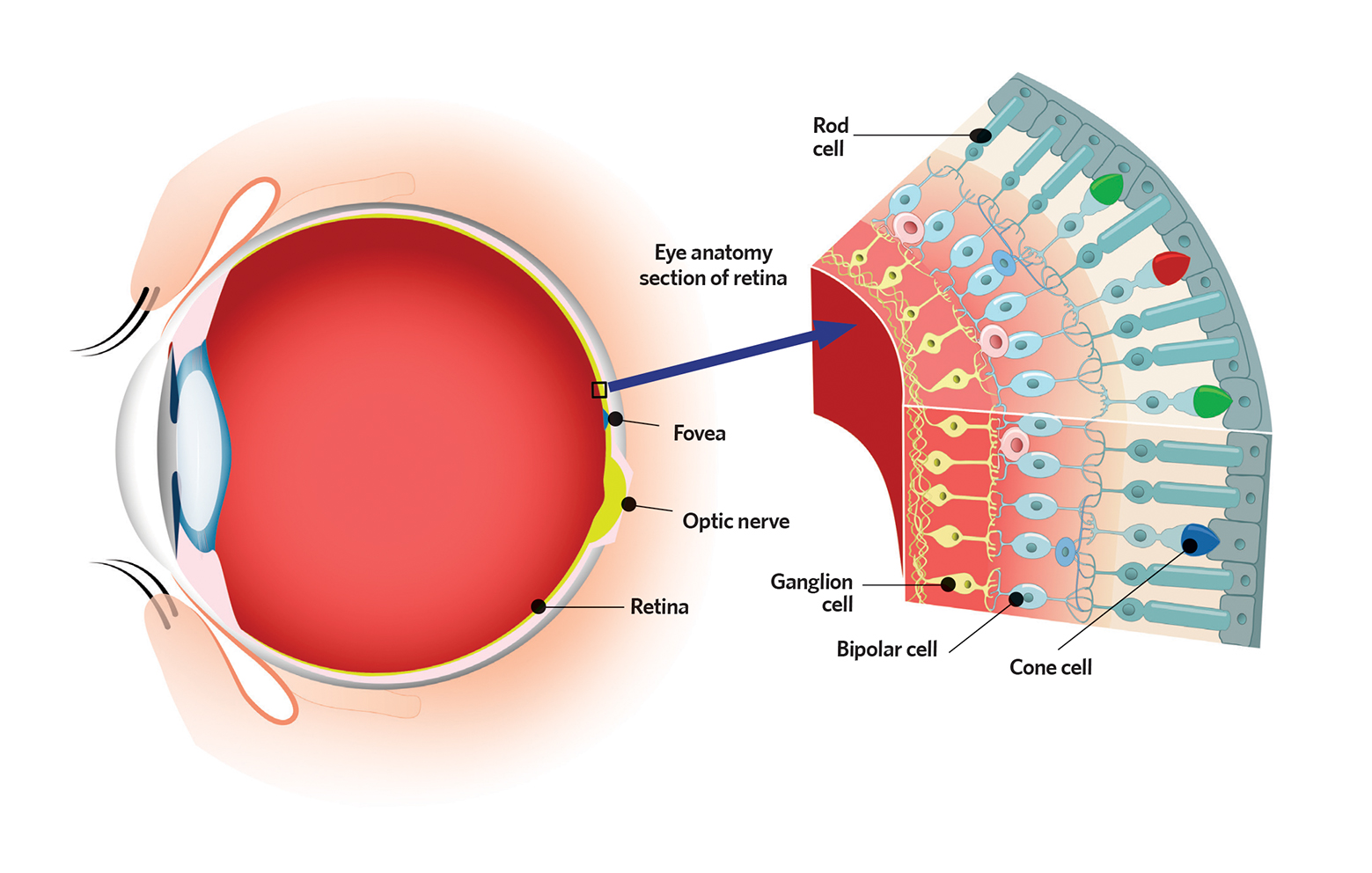 Humans have evolved so as to be able to visually interpret objects and their surroundings at lighting levels ranging from in the order of 100,000 lux, in extremely bright sunlight, to less than 0.01 lux on a (practically colourless) moonlit night (see boxout ‘Seeing the light’). Despite being able to see at very low values of illuminance, the opportunity to undertake activities comfortably and safely requires a visual environment that should meet both the physical and psychological needs of a ‘quality’ visual environment. Negative visual impacts should be minimised, such as eyestrain and the effects of glare and flicker (see boxout ‘Flicker and glare’) that can cause discomfort and can affect health if sustained over long periods, for sensitive occupants or where safety is directly impacted. 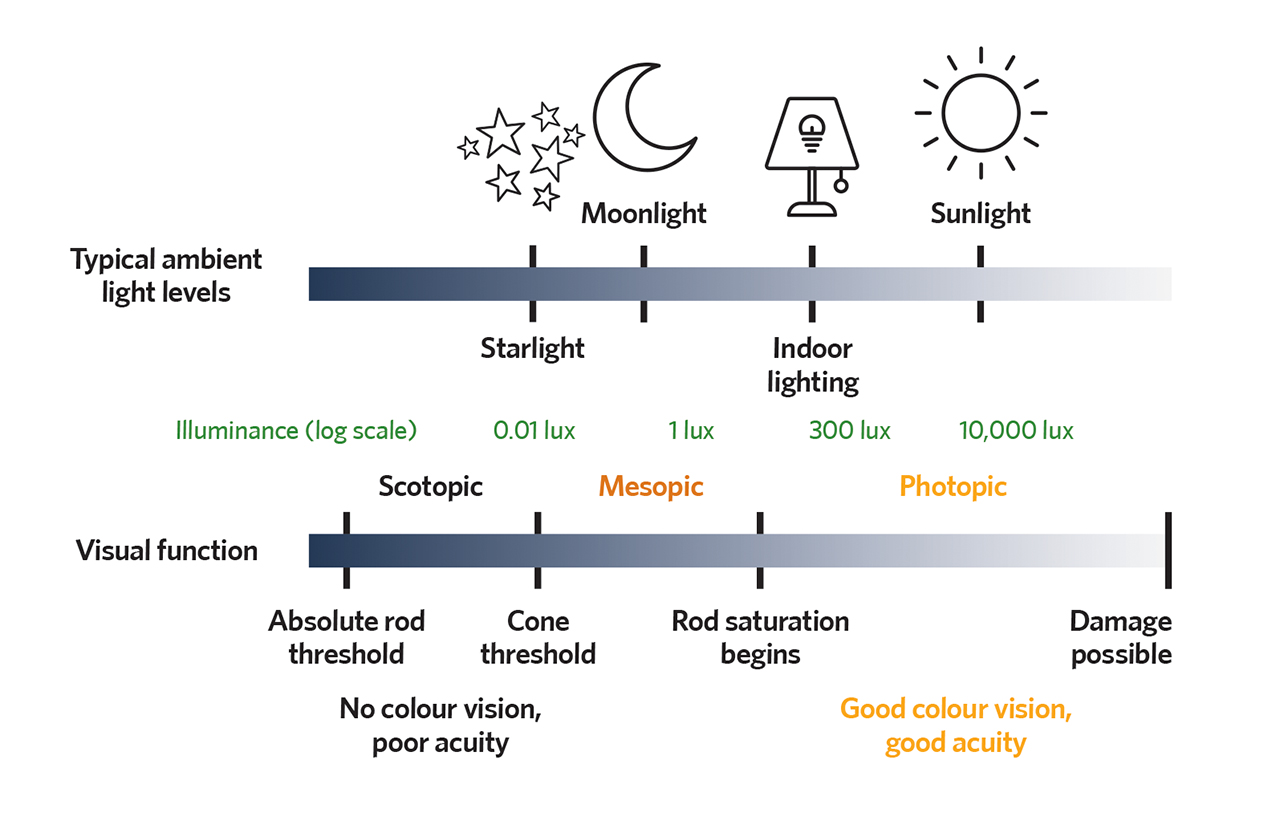 Increasingly, the circadian rhythm of occupants is considered as part of the lighting design process. The circadian system is a fundamental part of life and can be found in virtually all plants and animals, including humans. This regulates a wide range of physiological and behavioural systems including digestion, metabolism, the release of hormones, the control of core body temperature and alertness/sleepiness.2 Melatonin is the hormone that drives humans towards winding down and ultimately sleep. This hormone naturally increases throughout the afternoon and evening, from light to dark, and while it is a key hormone to regulate sleep-wake patterns, it is also linked to the regulation of digestive functions.

Correlated colour temperature (CCT) interprets the colour of light emitted by a lamp, relating it to a reference source when heated to a particular temperature, measured in Kelvin (K). Contrary to normal perceptions of temperature, lamps with a CCT below 3,300K are usually considered ‘warm’ and those above 5,300K are usually considered ‘cool’.7 (CCT is a simplification and provides no information on the detailed spectral output of the lamp.)

Cortisol is a hormone that is associated with adrenaline, which affects the state of readiness in a human. With a normal circadian rhythm, cortisol is secreted in the early morning dark to light period, helping the human body start the day. Warm white lighting temperature, with a correlated colour temperature of around 3,000K, stimulates melatonin production that, in turn, inhibits the production of cortisol, so reducing the state of readiness. Natural sunlight has a cooler, bluer colour temperature as the morning progresses towards midday; it then reverts to a warmer white as the afternoon becomes evening. Studies3 have shown that blue light reduces levels of melatonin and increases cortisol. When humans spent the majority of their time outside, being influenced by the sun and its natural movement throughout the day, cortisol and melatonin were automatically regulated, without disruption (as illustrated in Figure 3).

Glare may be caused directly by excessive luminance of light sources, both natural and artificial bright light sources, including small point sources such as LEDs. It can also be caused by the reflection of bright elements seen in the work environment, for example reflections on a computer screen. Disability glare impairs the vision of objects without necessarily causing discomfort; it can be produced directly or by reflection. Discomfort glare causes discomfort without necessarily impairing the vision of objects. Light sources should be protected from producing direct glare, for example by shielding of lamps and roof lights while at the same time preventing reflected glare, which is a particular problem with computer screens. Laptops and flexible workspaces can help, as users have more ability to modify where they sit and the orientation and angle of their screens.

Glare evaluation and prevention are discussed fully in the SLL Lighting Handbook.

Flicker (visible and invisible) can occur when the frequency of light output changes intensity rapidly. For example, when a power supply converts mains electricity from AC to DC, and the current is then sent to the LED, it can cause the light output to flicker because of high ‘ripple’ in the output current.8 Ripple is caused by incomplete suppression of the alternating waveform after the AC power has been rectified, and typically will be at twice the frequency of the supplied power – in Europe this can cause a 100Hz flicker. 100Hz is above (and outside) the frequency range that has been associated with photosensitive epilepsy; however, in the frequency range of 100Hz to 200Hz, where the flicker is too rapid to be seen, it is still resolved by the human retina,9 and so may influence occupant wellbeing. The depth of the flicker with LEDs is likely to be greater than for fluorescent lamps (as LEDs do not benefit from the phosphors that provide persistence) and since fluorescent lighting (controlled by magnetic ballast producing 100Hz flicker) has historically been linked with headaches, it is likely that the effect from LEDs could produce similar issues.9

Point sources of light, such as single LEDs in appliances, are less likely to induce health problems than a diffuse source of light that covers most of a person’s field of vision, as would be used in general lighting. Invisible flicker may be more likely to cause problems when the visual task demands precise positioning of the eyes, such as when reading. LEDs require good quality drivers to avoid flicker problems when dimming or mixing.

A large body of evidence suggests that daylight has a significant positive impact on health and wellbeing, linked to avoiding sleep disruption and allowing restorative sleep, and providing an environment that has a positive impact on mood, alertness and performance – as well as reducing the symptoms of depression. Conversely, inappropriately lit environments have been associated with sleep disruption, as melatonin levels are depressed, with consequent detrimental health consequences. 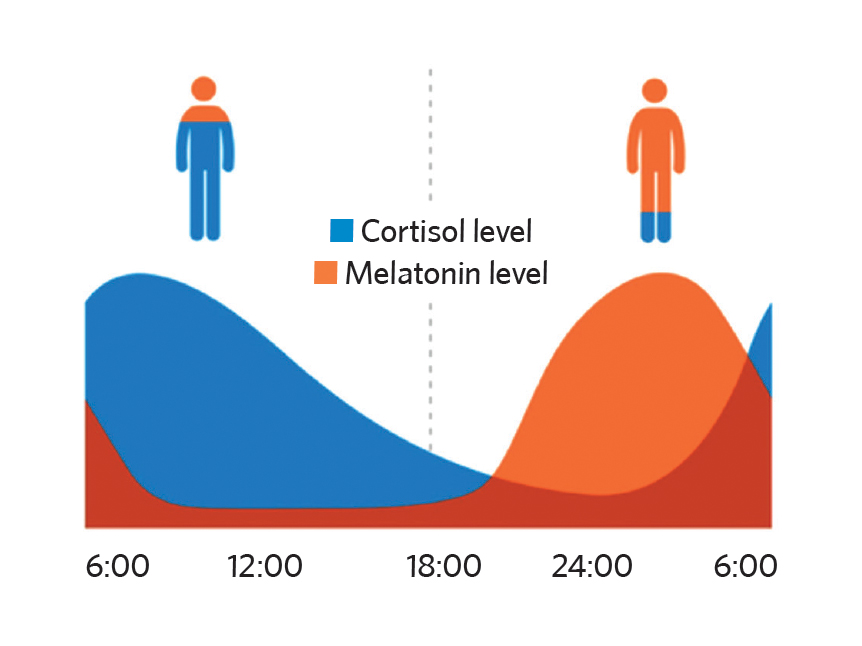 Figure 3: Simplified interpretation of levels of cortisol and melatonin in humans exposed to normal patterns of daylight (Source: Tamlite)

The unique and complex qualities of daylight are still not fully understood, but there is unanimity that, wherever practicable, daylighting should be maintained. There are basic illuminance requirements to ensure the safety and wellbeing of occupants. Historically, illuminance on a horizontal plane has been specified; however, additionally, vertical illuminance (for walls and other surfaces) and cylindrical illuminance (to better interpret facial features) require proper consideration for more effective lighting of the internal environment to maintain wellbeing.

The benefits go beyond those of visual stimulation. For example, understanding speech is primarily an auditory task, but intelligibility is improved when the face of the speaker is clearly in view – especially when there is interference from background noise, when the speaker has an unfamiliar accent, or for people with hearing impairments. Reading fluency and concentration in the classroom have been shown4 to be linked to lighting levels and colour temperature. 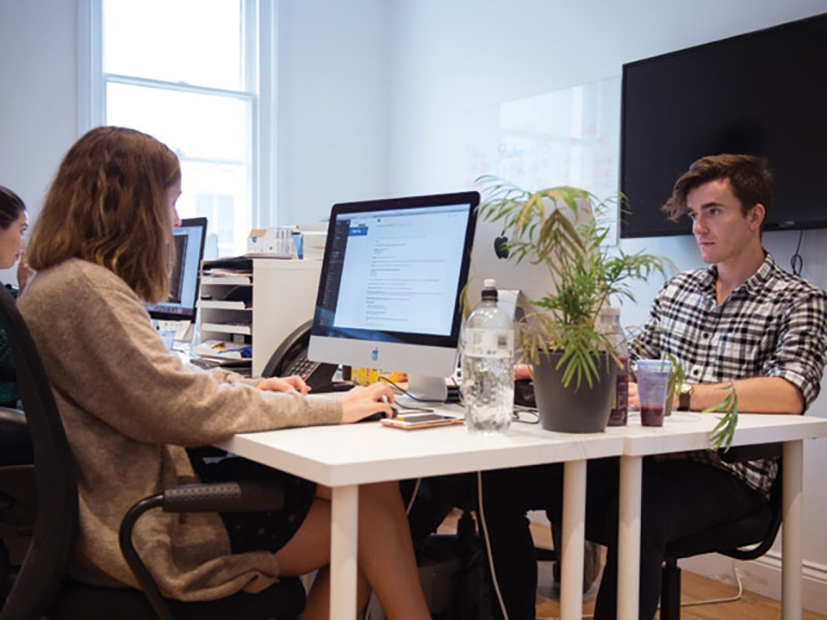 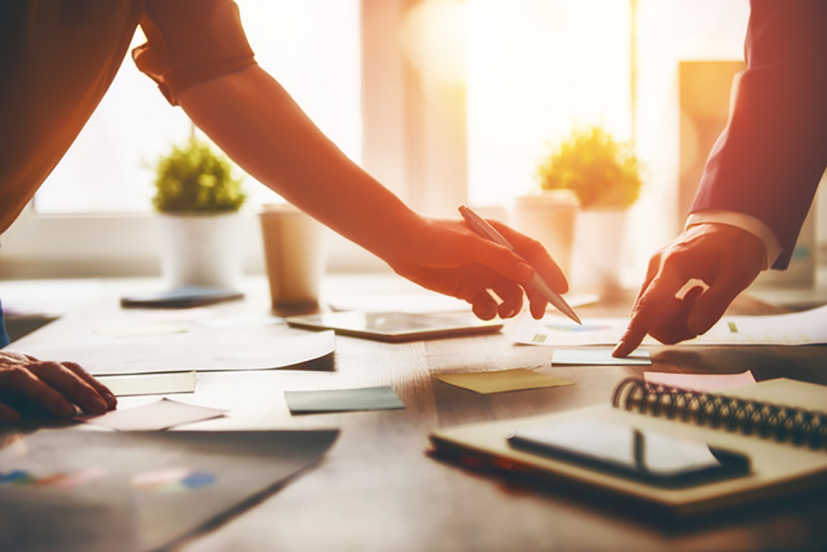 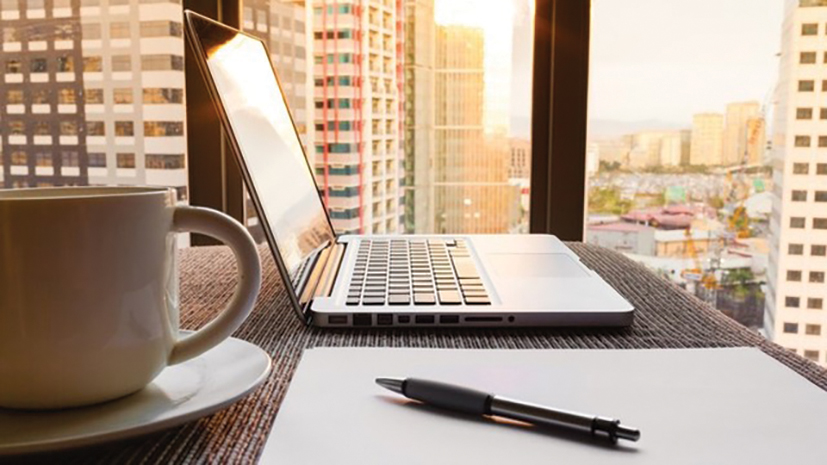 Electric lighting has a spectrum that lacks the complexity and is less evenly spread than that of daylight, and instead usually has peaks and troughs across the spectrum. However, LED luminaires can be tuned to a range of colour temperatures using a combination of individually coloured chips and, through connected lighting and DALI-enabled luminaires, are able to change the colour temperature throughout the day, mimicking the basic appearance of natural daylight, as illustrated in Figure 4.

Maintaining good colour rendering (discussed in the May CIBSE Journal CPD article) reportedly supports communication and sociability, and is important for the overall quality of the visual environment and the feeling of comfort and wellbeing. The aesthetic is so important that the European standard for lighting in workspaces, BS EN 12464-1,5 recommends that the colours of objects and of human skin be rendered naturally, correctly and in a way that makes people look attractive and healthy.

Lighting products are evolving rapidly, with many seeking to replicate natural daylight cycles, promoting alertness and cognitive performance during the day and avoiding sleep disruption at night. They are also being used to adapt the internal environment to improve performance and wellbeing – so, for example, for those who are working late hours or night shifts, reducing melatonin levels could help prevent tiredness.

The scheduling of colour appearance, illuminance levels, directivity and texture is complex and includes the appreciation and understanding of psychology, aesthetics, and context including cultural preferences and the application. Any potential benefits should be carefully evaluated, as currently there is a paucity of robust standards covering ‘lighting for health’, while knowledge and understanding is still evolving.

The end of the beginning

The UK may have left the EU, but it still remains a key participant in the European Standards system, says Hywel Davies

The big one. Overall Building Performance Champion @CIBSEAwards is twitter.com/i/broadcasts/1…

Are you confident your emergency lighting system will be adequate if called upon? Does it comply with current legislation, and just as importantly, can you…