Human-centric, or biodynamic, lighting describes the use of artificial lighting sources to create visual environments that mimic the natural daylight that drives – and can interfere with – the human body’s daily cycle. Where daylight is not a practical option, the technique promises to benefit occupant performance, comfort, health and wellbeing but – despite intensive research over many years – there is still much to discover. This CPD will explore some of the factors that are combining to build a compelling case for the assessment of the benefits of human-centric lighting principles in design standards.

Humans are attuned to the variation in the natural outdoor daylight that has normalised the circadian rhythm (see ‘The circadian rhythm’ panel), which is influenced by the integration of light intensity, colour, position, direction and texture. Altering the patterns of people’s exposure to light has been shown2 to contribute to the alleviation – or prevention – of health problems such as chronic sleep phase disorder (a potentially genetic disorder that shifts the length and phases of sleep) and sleep maintenance insomnia (difficulty staying asleep, or waking too early). In the workplace, sleep deprivation in night workers is associated with an increased number of accidents and reduced productivity. Applying a programme of light exposure (phototherapy) has been shown3 to phase-shift body clocks of night workers, enabling them to perform more effectively.

The term is derived from the Latin phrase ‘circa diem’, meaning ‘about a day’, and refers to variations or rhythms with a cycle period of approximately 24 hours. The circadian system is a basic part of life and can be found in virtually all plants and animals, including humans. This regulates a wide range of physiological and behavioural systems, from digestion and the release of hormones to controlling core body temperature and when a person feels alert or sleepy.1

The circadian rhythm can be disrupted with changes in lifestyle and ambient lighting, and in the absence of light its period will usually lengthen. As discussed in the Society of Light and Lighting’s (SLL’s) Code for lighting,2 the organ that controls these cycles in humans is the suprachiasmatic nuclei (SCN) set deep in the brain. The SCN is linked directly to the retina, receiving signals from a recently discovered photoreceptor – the intrinsically photosensitive retinal ganglion cell (ipRGC).

The Alzheimer’s Society4 reports that bright-light therapy may benefit people with dementia, reducing restlessness and disturbed sleep for people with the condition, but it notes that further research is needed. Recent reports5 of a study6 undertaken in Denmark suggested that people being treated for severe depression were discharged in almost half the time if their rooms faced south-east rather than north-west – with the intensity of daylight in south-east rooms 17- to 20-times greater than north-west-facing ones. 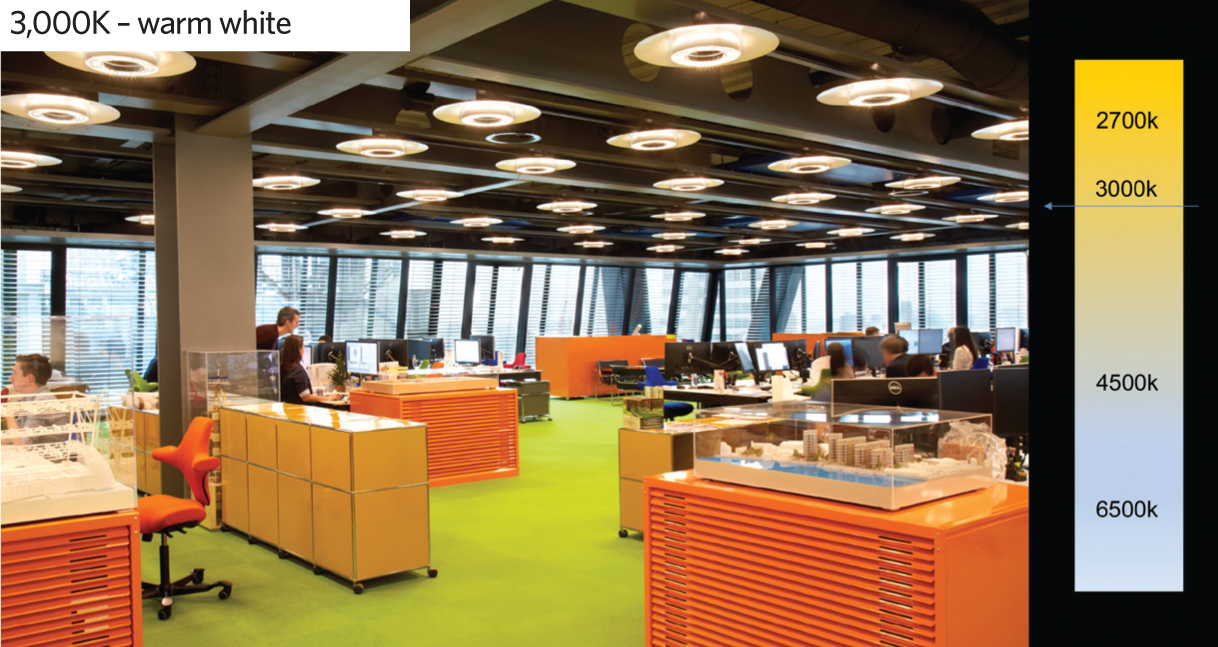 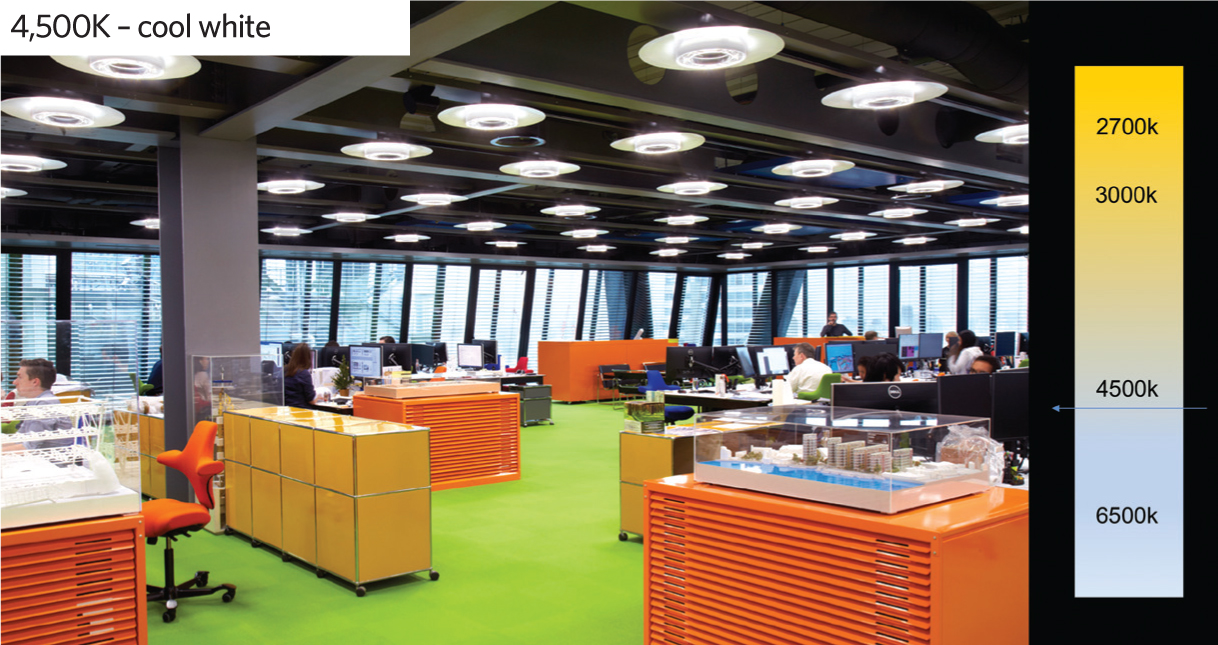 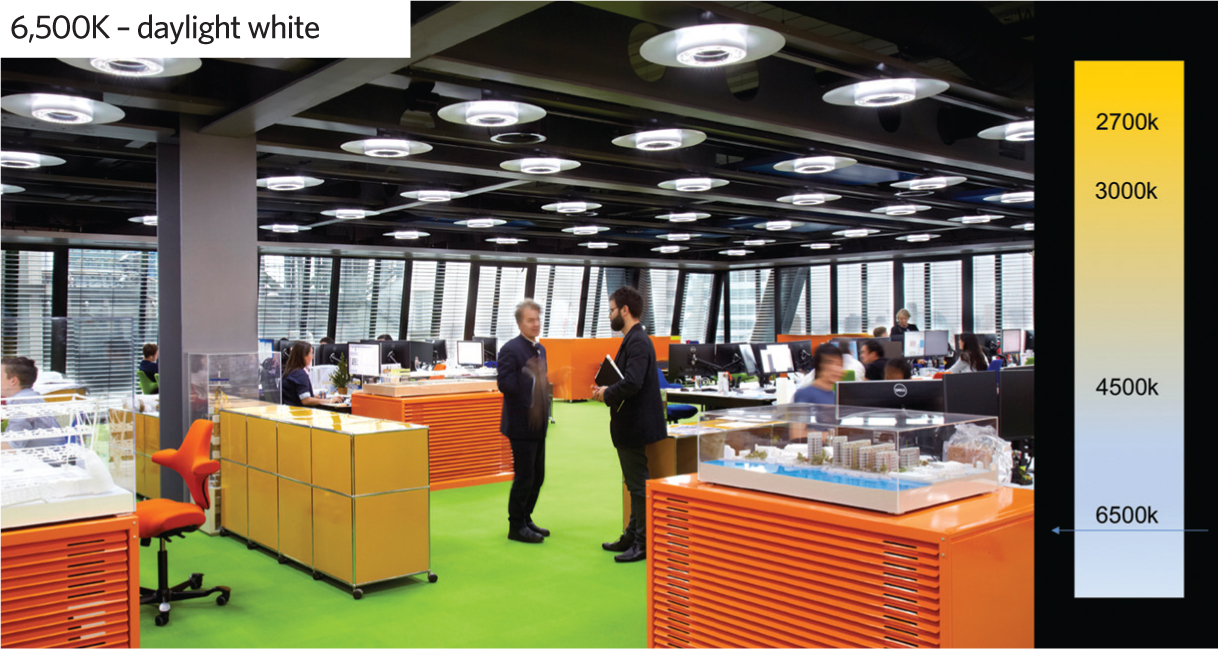 In the past year, Joel Soler, from Michigan State University, reported7 outcomes from research indicating that light intensity can change the structure of the brain and impair a person’s ability to learn and remember. In his recent presentation,8 Russell Foster, of the Sleep and Circadian Neuroscience Institute at the University of Oxford, presents findings suggesting that as the length increases of ‘social jet lag’ – the time difference between when a person naturally wakes compared with when they need to wake – so does the risk of poor health (for example, obesity and diabetes), bad moods, increased fatigue and heart disease. As the population ages, an increasing number of elderly people suffer with conditions related to a failing circadian system and their consequent sleep problems.

Light, therefore, not only affects what is consciously visible, but also alertness, wellbeing and performance. Although the human circadian rhythm and seasonal variation are genetically fixed, they will be affected by the human condition, and are likely to be influenced by the surroundings – including the visual environment.

As the sun rises in the morning and descends at night, there is a continuous progressive variation in colour range and intensity. Daylight, with a high proportion of blue light – particularly in the morning – contributes to the suppression of the hormone melatonin (which promotes sleep), reducing the prospect for deep sleep. The hormone cortisol is produced in the body in the morning, stimulating the metabolism, programming the body for the day’s activity. The first morning light helps suppress the production of melatonin, while the levels of cortisol decrease over the course of the day. For daytime workers, it can be desirable to support the activity of the cortisol at the beginning of the working day by stimulating cold-tone light and high illuminance values. In the afternoon, the production of cortisol in the body has already decreased significantly. The production of the sleep hormone is not yet required as the evening approaches, and practice has shown that, in this transitional period, alertness levels can be enhanced by means of a neutral mixed light and reducing the illuminance level. In the evening, as people tire, the melatonin levels in their blood increases. Then, as they sleep, melatonin levels drop in readiness for morning awakening. A lack of light during the day and too much in the evening has been shown to adversely affect sleeping patterns.

At the Amsterdam office of the property company CBRE (Figure 2), a time-controlled lighting system features a ‘circadian-friendly’ lighting sequence, which varies the colour temperature and intensity during the course of the day. Employees are stimulated during the morning and early afternoon with high illuminance levels and cool indirect white light. At midday and late afternoon, the light levels fall and become warmer.

It was reported  that researchers found an accuracy improvement of 12% in an objective experiment. Additionally, the participants working in the office with the human-centric lighting (and other novel design features) found their total work performance to be 18% better, 71% found they had more energy, 76% thought they were happier, and 50 per cent said they were healthier.

As discussed in the SLL’s Code for lighting, in recent years evidence has accumulated for the presence of a non-visual photoreceptor in the human eye, the primary purpose of which is to regulate the body’s internal clock. This has begun to reveal the importance of exposure to adequate daylight levels for the health and wellbeing of humans, many of whom now spend most of their lives inside buildings. Light sensitivity is controlled by rods and cones in the eye. Rods deal with low sensitivity and cones deal with colour and higher sensitivity. The recently recognised third receptor – the intrinsically photosensitive retinal ganglion cell – may provide an important means of linking health and wellbeing to light.

The benefits of different hues of ‘white’ light have been well documented – for example, the blue end of the spectrum is linked with alertness. However, it is still not clearly understood what other factors in the lighting scene are significant. Studies indicate that higher lighting levels at the beginning of the morning that slowly decrease, together with a gradual increase in colour temperature, may be beneficial. However, the physiological effects of tuneable white light need careful consideration, as long-term consequences have not yet been determined. 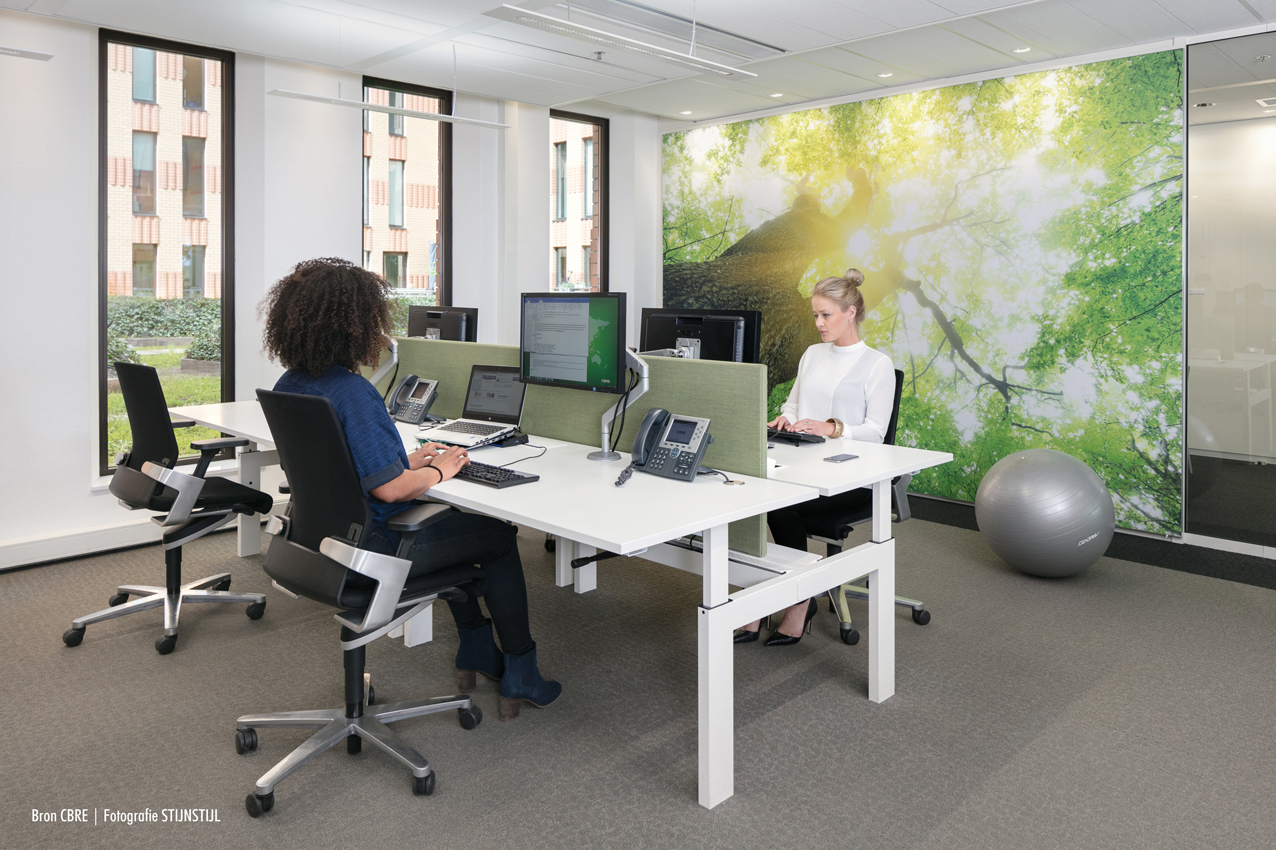 The evolution of efficient light sources has made deep open-plan office buildings cost effective, where lighting levels, energy efficiency and glare control have provided the key design parameters. These parameters have been optimised and harmonised to evolve towards the perfect office luminaire, which is often installed in a standard grid to provide illumination of the open-plan office where glare is controlled and the space is softly lit.

However, this can create a flat, visually undefined and unstimulating office that may not fit well with the shifting philosophy of ‘agile’ working. Although the open-plan workspace filled with desks is still the most common, another series of spaces has emerged to accommodate different tasks and the varying needs of workers.

The workplace is evolving further, to become not just one space, but a collection of spaces designed for different purposes – such as meeting rooms, breakout spaces, video-conferencing booths and concentration areas – that present a complex pattern of visual environments. 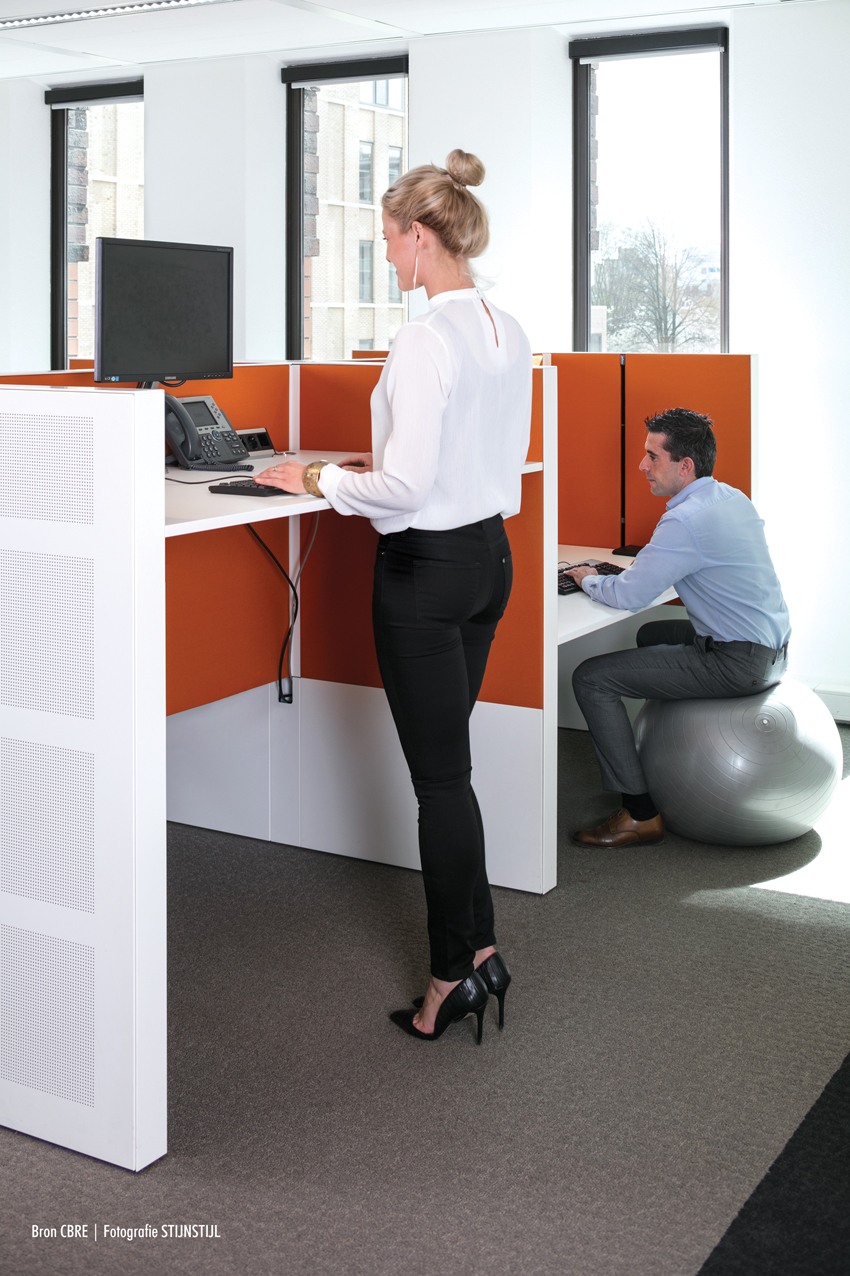 Considering a general office workspace, most guidelines will typically require illuminance levels of between 300 lux (for screen-based tasks) and 500 lux (for paper-based tasks). High contrast in luminous intensities between the screen and overhead luminaires will make the human eye adjust continuously, which not only causes tiredness but can also result in eye fatigue and headaches, as well as contributing to eye strain. As screens have become more portable, the challenge presented by this has increased. The colour temperature of an environment can also contribute to eye fatigue, as the colour temperature of on-screen ‘white’ matches cool daylight (6,500K), yet many offices are illuminated in neutral white light (4,000K) (examples of colour temperature are illustrated in Figure 1). CIBSE/SLL LG79 sets out extensive guidance on suitable lighting design for offices.

This difference in colour also makes the eye continuously work to balance the white tones, which could also contribute to eye strain and tiredness. Computer screens have recently been introduced that adjust colour temperature throughout the day, with the aim of supporting ‘natural circadian rhythms’ and so improve wellbeing. To impact the circadian rhythm, it is likely that every light source in a space should have a coordinated change in colour temperature.

However, the dynamic screen technology provides an opportunity to explore a full dynamic lighting scheme that may support circadian rhythms better – although, with the modern workforce so mobile, it is difficult to imagine the possibility of being able to manage all the sources of light they are exposed to over the course of a day. 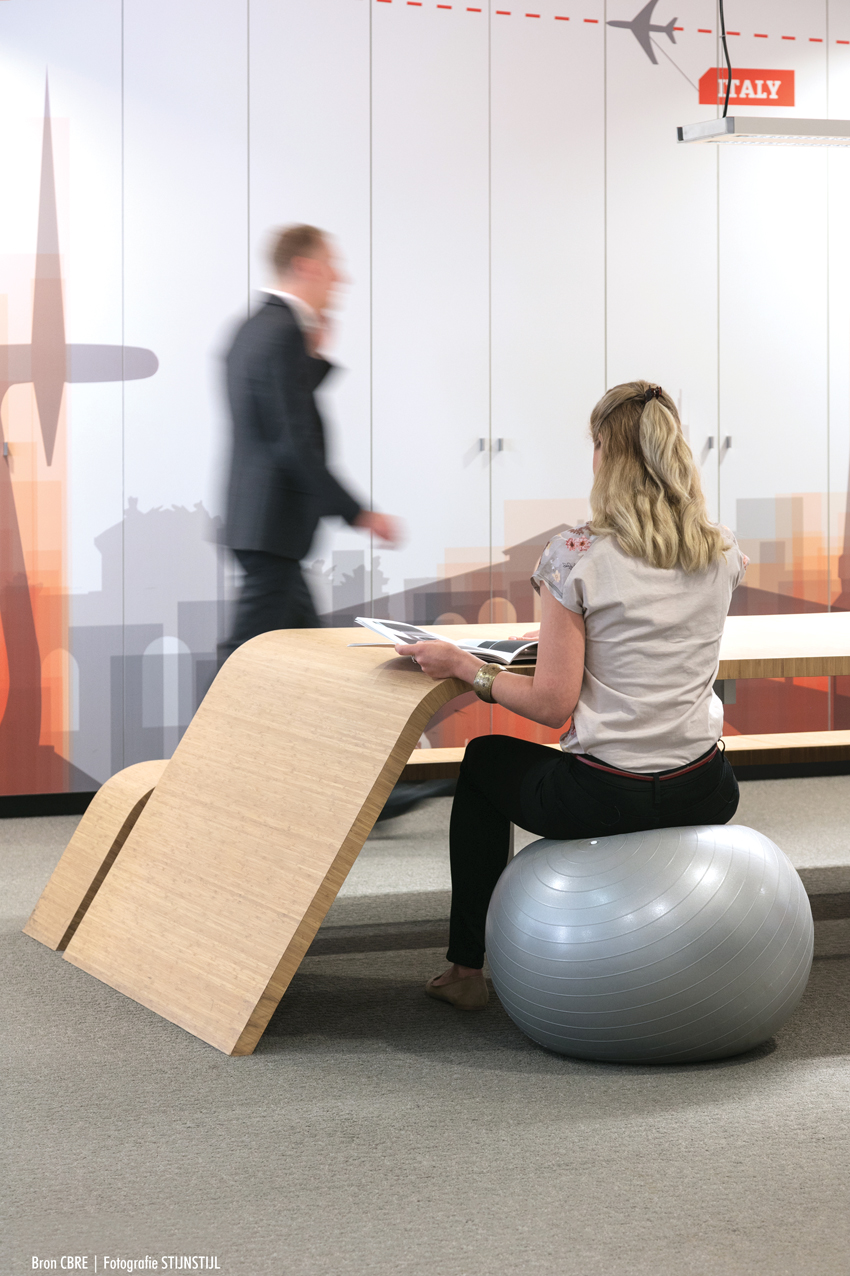 While building standards are becoming increasingly environmentally aware, the quantification of the ‘wellness’ of the building from the point of view of its occupants is a relatively new pursuit. The Well Building Standard10 includes illumination guidelines that are explicitly ‘aimed to minimise disruption to the body’s circadian system, enhance productivity, support good sleep quality and provide appropriate visual acuity where needed’. The upcoming revised edition of CIBSE TM40 Health Issues in Building Services is likely to include reference to the complex mechanisms of human responses to light, as well as highlighting that there is still a need for further research to establish metrics for lighting design that take circadian effects into consideration. As highlighted in the SLL Code for lighting ‘both the visual system and the circadian system have evolved under a natural regime of daylight days and dark nights. The alternative electric light sources have only been available for use by day and night for about a hundred years, a very short time in evolutionary terms’.

Human-centric lighting aims to deliver a type of ‘daylight progression’ using different sources, colour temperatures and illuminances to provide a form of compensation for humans where they suffer from lack of access to daylight. But this is early days in establishing the full potential of such techniques. In his recent editorial11 for CIBSE’s Lighting Research and Technology Journal, Peter Boyce provides an experienced take on the current situation: ‘In many ways, human-centric lighting is new land waiting to be explored. [This…] requires knowledge and this can only be gained by careful research into the importance, magnitude and reliability of the effects. It is only in this way that successful exploration can be ensured.’

Activist-researcher Russell Foster appears to concur on the magnitude of effort required to generate the rigorous research needed in this area. He has been quoted as saying: ‘Perhaps the time is now right for biologists, lighting engineers and architects to work together to generate these data for the development of truly human-centric lighting.’