Traditionally, the basic effectiveness of a refrigeration system has been stated thermodynamically in terms of the coefficient of performance (COP). However, when assessing a water chiller installation, the overall performance will be dependent not only on the underlying refrigeration cycle, but also on the interaction between the components; the heat-rejection medium; the air or water that is being cooled and the losses because of inefficiencies in drive motors, fans, pumps and controls; heat and pressure losses; and energy for the crankcase heater. This CPD article will compare the predominant measures that attempt to provide an interpretation of this operational efficiency.

The energy efficiency ratio (EER) is the term used to describe the basic instantaneous practical energy efficiency of a refrigeration cooling cycle, and provides a ratio of useful cooling energy to (typically) electrical input energy. In SI units, this is a dimensionless ratio and is lower than the cooling COP, as it accounts for the practically inherent ‘losses’. This efficiency is usually quoted in terms of ‘full load’ at the design or specific selection conditions. Typically, this would be efficiency at 100% capacity at an ambient (external air dry-bulb) temperature of 35°C.

Testing standards (such as BS EN 14511 ) typically mandate that this performance is established for a specific leaving chilled water temperature of 7°C. In reality, chillers operate over a range of loads and ambient temperatures, and it is this time-weighted performance that will determine the energy consumption – and carbon emissions – needed to assess compliance with regulations such as Approved Document Part L of the England and Wales Building Regulations.

In recent years, this average efficiency has most commonly been expressed as a seasonal energy efficiency ratio (SEER) or European SEER (ESEER). The ESEER is provided by the weighted average of performance under four different operating conditions, with a constant leaving chilled water temperature of 7°C.

The weightings attempt to give an approximation of the fraction of the operational period that the comfort cooler will operate at that load. 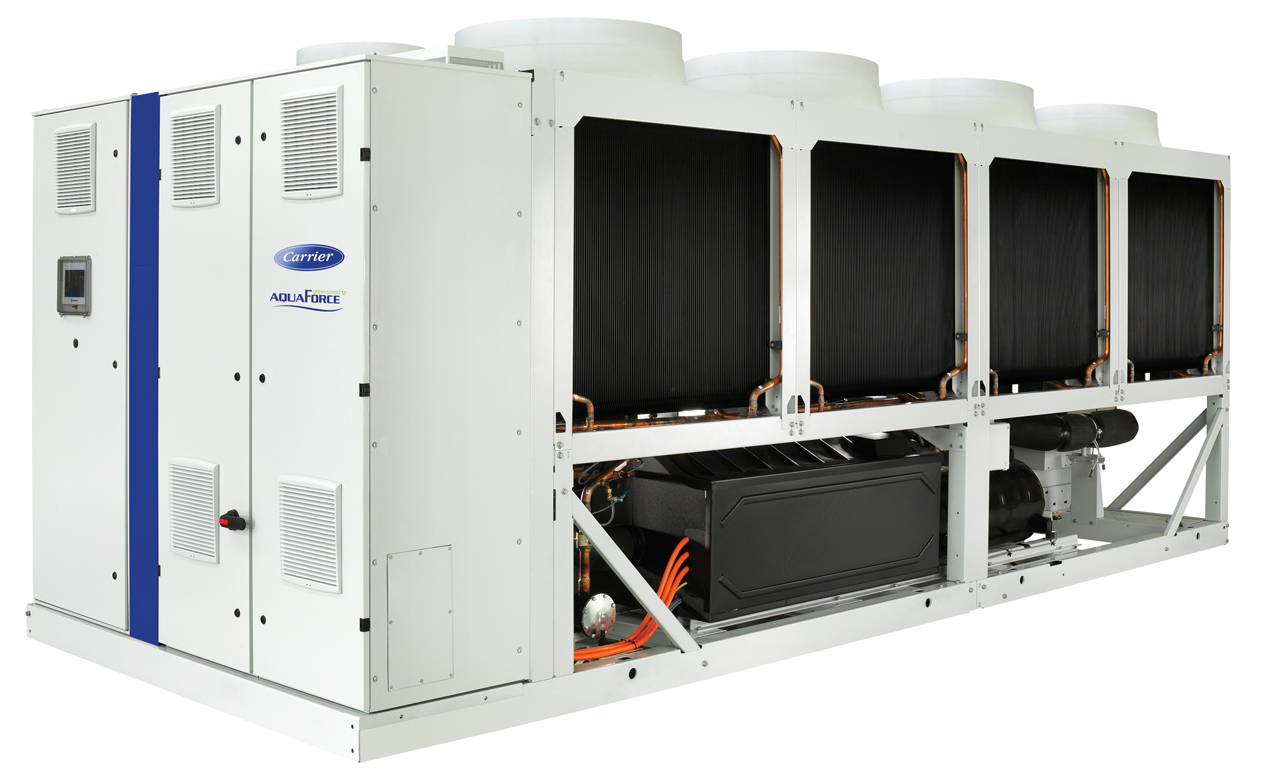 An example of such a calculation is shown in Table 1 for a particular chiller servicing an office. The specific values of EER at the different loads are provided by the manufacturer from tests undertaken to BS EN 14511.

The requirements2 developed under Lot 213 of the European Commission’s Ecodesign Directive4, which came into force earlier this year, set the required chiller efficiency when used for controlling the environment for people (comfort chillers). This introduces a variation on the calculation method of the SEER that employs BIN temperature-based analysis and takes account of other operational factors.

There are two versions of the Ecodesign SEER for comfort chillers: SEER (12°C/7°C) for chillers used in systems that employ terminals such as fan coils and air handling units; and SEER (23°C/18°C) for chillers used in systems having chilled ceilings or floors. The minimum required efficiency is the same in both instances, even though operating at a higher chilled water temperature will result in a better efficiency ratio. However, the chillers must be compliant with the requirements corresponding to their intended use or to the application for which they are marketed. If a manufacturer declares both applications, the product has to be compliant with both applications, and if it conforms at one set of conditions (for example, 23°C/18°C), but not the other (in this instance,12°C/7°C), it may only be marketed and applied to operate at the higher temperature.

To comply with the Ecodesign directive, the comfort cooler must meet the minimum efficiency performance standards (MEPS) for seasonal space cooling energy efficiency (SSCEE). The SSCEE relates performance to primary energy use, and is determined by dividing the SEER by the conversion coefficient (CC) that reflects the estimated 40% average EU electrical generation efficiency (so CC = 2.5). The required SSCEEs are shown in Table 2.

However, these factors are unlikely to be useful when attempting to predict real levels of chiller efficiency in a particular location – such as in a UK town – in order to determine the annual energy consumption (and CO2 emissions) and, hence, Part L compliance. More realistically, there are likely to be multiple chillers operating to meet varying loads, and the load profiles and ambient temperatures used in determining the ESEER and Ecodesign SEERs may not be representative of a particular UK location.

The England and Wales non-domestic building services compliance guide gives a number of approximations that can be used to determine appropriate data for the SEER calculation for the cooling plant used on a building. This includes appropriate adjustments for systems with free cooling or heat recovery. For a single chiller, in the absence of reliable part-load data, the default position is to use the full-load EER of the unit at the project design conditions. Where part-load data is available, and where the building is an office, a more representative approximation may be made by using the same weighted calculation procedure as the ESEER, assuming that the leaving chilled water temperature is 7°C at each part-load operating point. 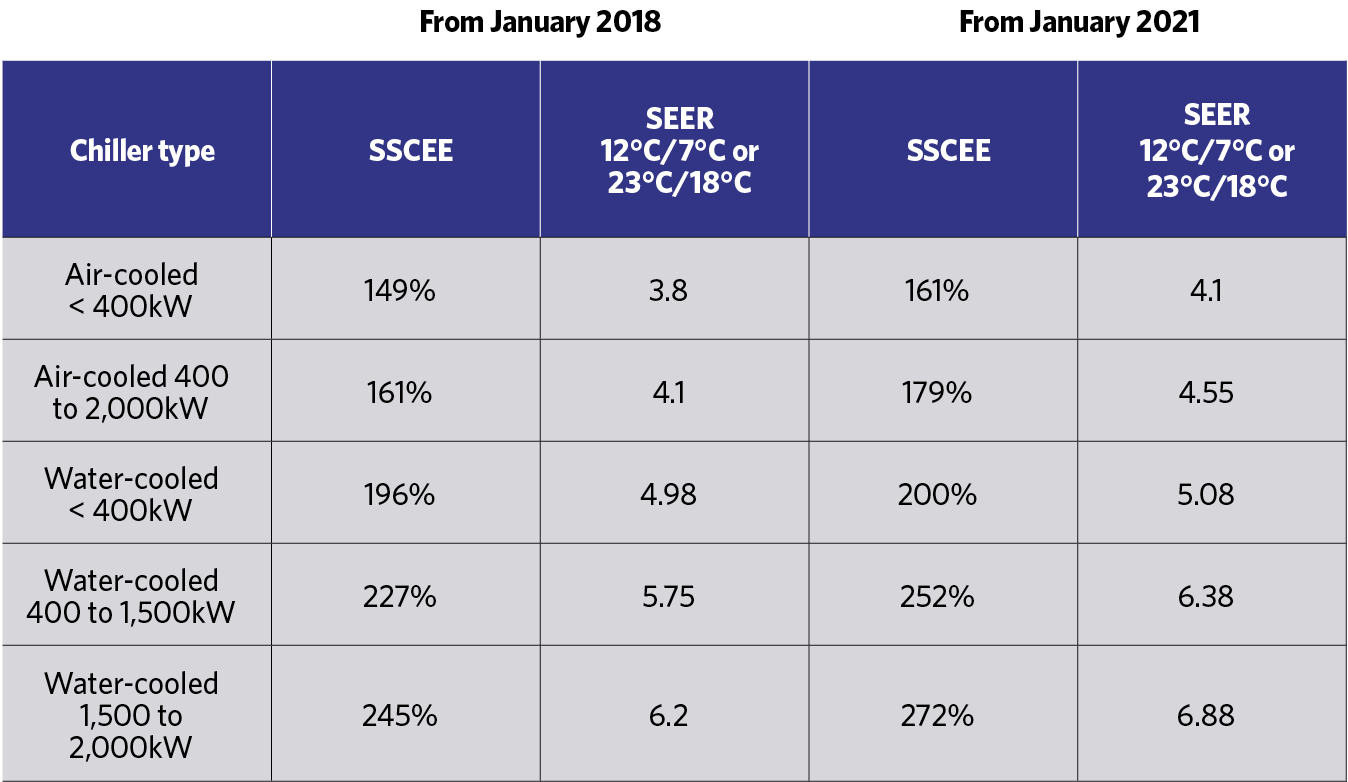 Table 2: Minimum efficiency performance standards for chillers, as defined by the Ecodesign Directive

The non-domestic building services compliance guide suggests that multiple-chiller systems may be evaluated using a plant seasonal energy efficiency ratio (PSEER) value that may be calculated based on the sum of the energy consumptions of all the operating chillers. It indicates that this should include all the factors that can influence the combined performance of the multiple-chiller installation, including the:

The PSEER value is then used as the SEER in the Simplified Building Energy Model (SBEM) calculation that is used for assessing Part L compliance.

Calculating a PSEER does not necessarily require an hour-by-hour dynamic model of the building. A good approximation can be made using simpler, BIN temperature-based analysis that could be undertaken with a spreadsheet tool using part-load EER data. However, considering the number of coincident dependant parameters, this might be more readily achievable using software tools that are available from manufacturers. These can provide the performance of each of the individual chillers within the system that are working together to meet the varying load, at the actual load calculated for each BIN temperature. This requires detailed part-load EER data that is only likely to be available in the manufacturers’ extended data sets. Such software can determine the number of chillers operating by considering the control sequence selected (parallel unloading or sequenced), and can then calculate the individual fractional loads. If the chillers are not of equal size, the sequence in which they are bought on line can be set to reflect the actual system setup. 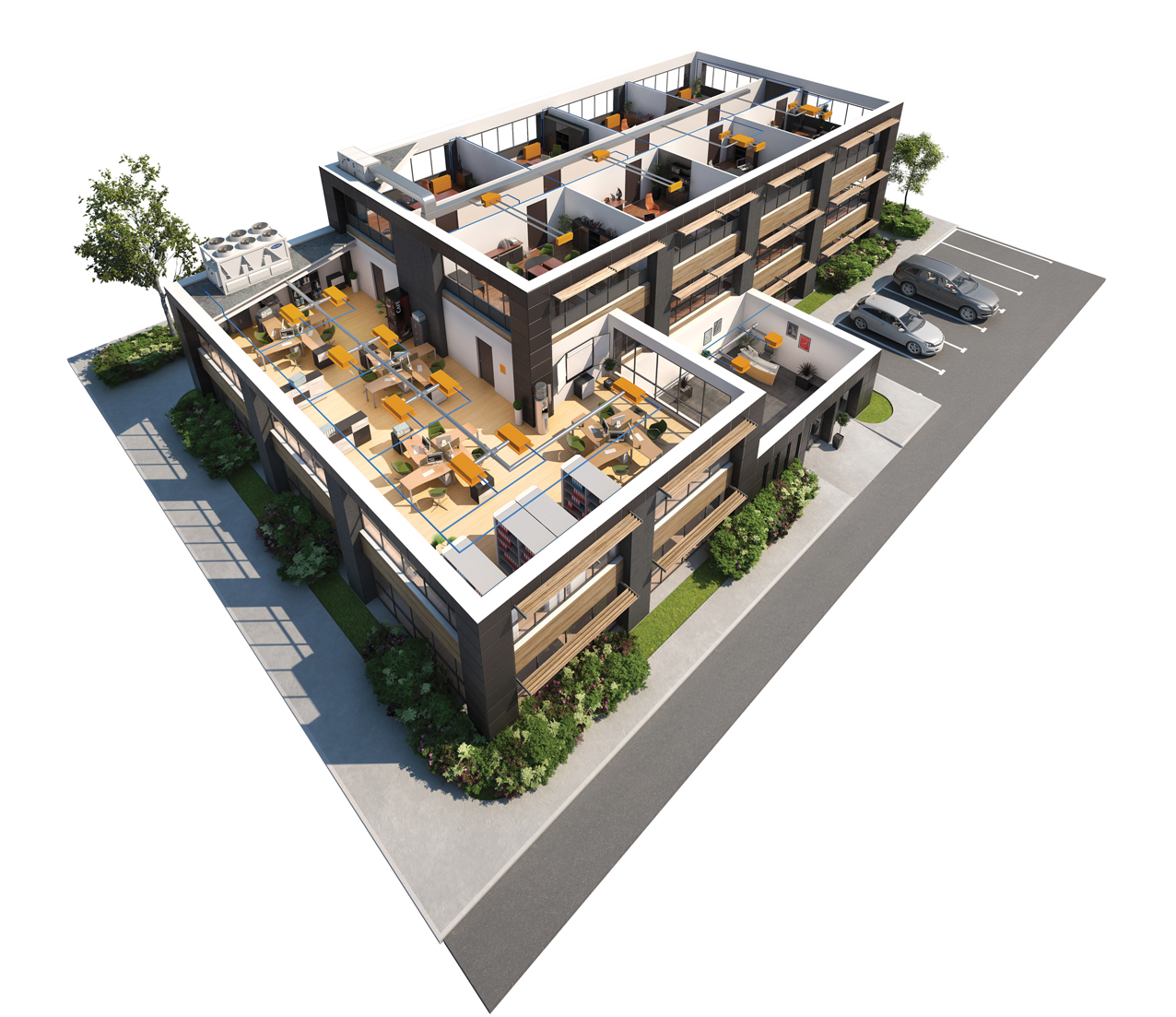 The building load profile could be introduced to such a model or – as is often needed when options are being evaluated – a profile can be simulated. This can make reference to historical weather data for the location, and the proposed hours of operation, to generate a realistic ambient temperature profile for the building. The load profile can then be defined in terms of the variation in the ambient temperature and the specified maximum and minimum operating load.

Given the assumptions made in generating the building load profile, this would not determine ‘exact’ system performance. However, it certainly complies with the stated intent of the non-domestic building services compliance guide ‘to calculate a PSEER which matches the proposed installation more closely than the simplifications [using the SEER formula]’.

Such methods do not have the potential resolution of an hour-by-hour dynamic model. However, as building cooling load profiles are, at best, an approximation, the more detailed hour-by-hour calculation is unlikely to offer any significant improvement in accuracy. Different systems may be compared – such as air-cooled versus water-cooled – and PSEERs can be generated that match the proposed installation.

The examples below have been prepared by a chiller manufacturer5, using detailed EER data for its chillers applied with a BIN temperature-based chiller system operation programme. They illustrate PSEERs calculated for a variety of common chiller technologies and system configurations. They are both for a London office, with weekday operating hours of 7am until 6pm, and Saturday operation from 9am until 1pm, using Heathrow weather data for the systems, with a constant 6°C leaving chilled water.

The first in Table 3 applies two air-cooled chillers in parallel, with a peak cooling load of 1,000kW, minimum load 200kW, with the load directly related to ambient temperature.

This indicates no direct – or simple – correlation between unit EER, unit SEER and PSEER. This is because the PSEER is dependent not just on the inherent efficiency of the particular chiller technology, but also on the specific application.

PSEERs can be similarly calculated for water-cooled systems, as in Table 4. This considers a similar application but, this time, featuring two water-cooled chillers in parallel, a peak-cooling load of 3,000kW and a minimum cooling load of 600kW. There is one cooling tower per chiller, with a variable-speed tower fan with 0.014kW design power input per kW heat rejection. There is constant flow condenser water, with a piping dynamic loss of 100kPa and overall pump/motor efficiency of 75%.

Although the resulting EER, SEER and ESEER provide standardised values of efficiency, they are not necessarily good indicators of ‘real’ system efficiency. The PSEER calculation recommended in the non-domestic building services compliance guide is more likely to provide a prediction that more accurately reflects the specific application, both for multiple and single chillers. It is not just dependent on the chiller technology, but also on the specifics of the application, and is required to make meaningful comparisons between air-cooled and water-cooled systems. Meaningful PSEERs can be determined using simplified, BIN temperature-based models.

■ With thanks to Carrier UK technical sales team for the extensive examples and core materials.