Phase-change material (PCM)-air heat exchangers include a thermal battery consisting of encapsulated PCM panels in the ventilation path as a means of storing, and subsequently releasing, heat. The thermal battery employs latent heat to store energy that, typically, is charged (and solidified) during the night and discharged for cooling during the day, by passing air across the heat exchanger. 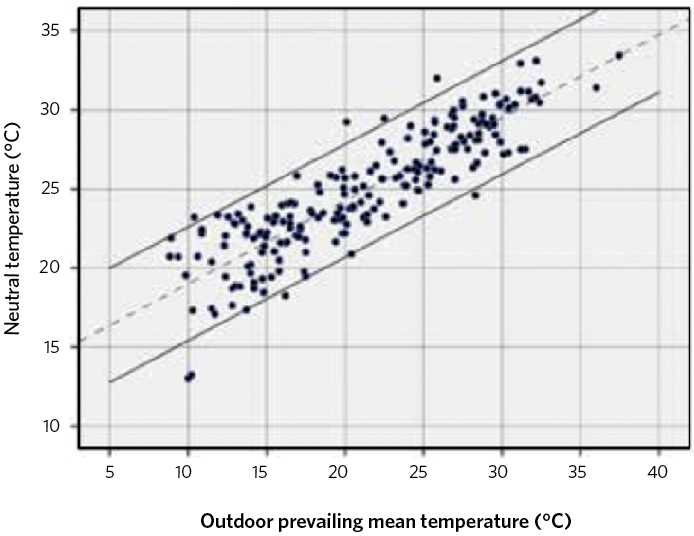 When applying ventilation systems to an office environment, it is normally appropriate to consider adaptive thermal comfort methodology. This links the acceptable indoor comfort temperature with the running average outdoor temperature, so that, during summer conditions, occupants are likely to be comfortable at higher internal temperatures and, conversely, comfortable at lower temperatures in winter – as illustrated for free-running buildings in Figure 1 from CIBSE TM52.1

As reported in TM52, the relationship is a complex one because it involves all the interactions between climate, building, services and occupants and the resulting indoor environment – and the occupants are likely to take a week to adjust fully to a change in the outdoor temperature. 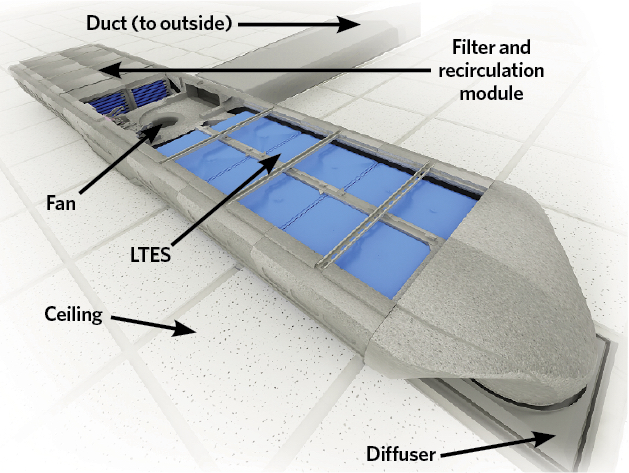 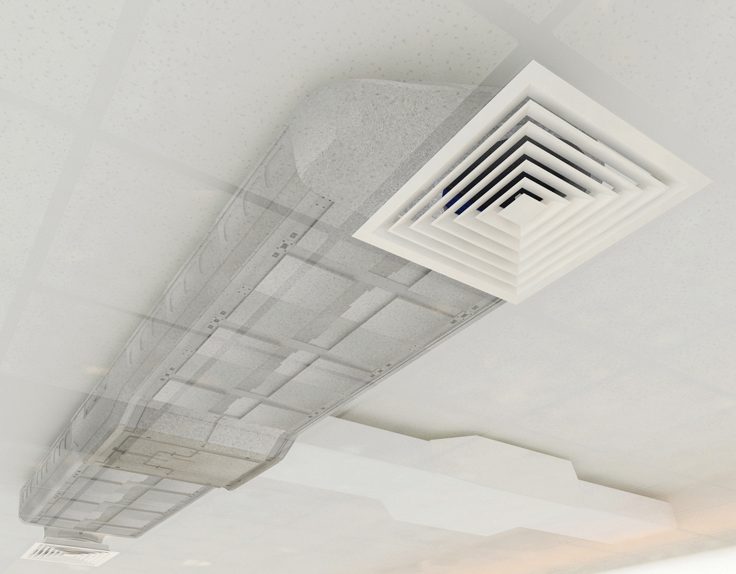 However, this has been codified in CIBSE Guide A to provide ranges of external temperature-related operative temperatures that are likely to give comfort in applications such as offices. CIBSE recommends that designers should aim to remain within the Category II limits for ‘free-running’ operation: (0.33·θrm + 15.8) <= θc <= (0.33·θrm + 21.8) where θc is the operative (comfort) temperature (°C) and θrm is the running mean of the daily mean outdoor air temperature (°C). (See CPD article, CIBSE Journal, July 2017 for more details.) As indicated in TM52, the division between mechanically and naturally ventilated (free-running) buildings is blurring because of the increasing use of mixed-mode or hybrid buildings, and it is suggested that people respond in a similar way to all kinds of buildings, irrespective of their ventilation system.

Figure 2 shows one of the few PCM-air heat exchangers that are currently available in the marketplace. The equipment is essentially a demand-controlled ventilation and cooling system, controlled by the feedback of temperature, relative humidity and CO2 levels inside the conditioned space. There are several panels of encapsulated PCM fixed in the unit, to supply cool air when it is needed, that integrate to provide the low-temperature energy store (LTES).

As an example, an application of a system – as shown schematically in Figure 3 – was installed to supply an open-plan office. The temperatures were monitored, and example summer day data are shown in Figure 4, with the system being operated under the operating modes listed below (it was assumed that the occupied spaces will have mean radiant temperatures similar to the air temperature and, with relatively low air velocities, the operative temperature can be represented by air temperature).

Figure 3: Schematic of ventilation system with integrated PCM in a low-temperature energy store (LTES). The temperature measuring points (A) to (D) are referred to in the text

Night purge (midnight to 01:00) – The fan runs at the maximum speed setting for one hour, with the aim of flushing the room air. Temperatures all decrease during this period.

Summer night charge (01:00 to 07:00) – The LTES outlet temperature [C] reduces, indicating that the PCM is being ‘charged’ as the cool external intake air passes through.

System switched off (07:00 to 08:00) – The period before the occupancy. In this case, the room temperature [D] rises during this period, which effectively offsets some of the work done to cool the space during the night. At 07:00, the room was within the thermal comfort range and there was no overcooling. 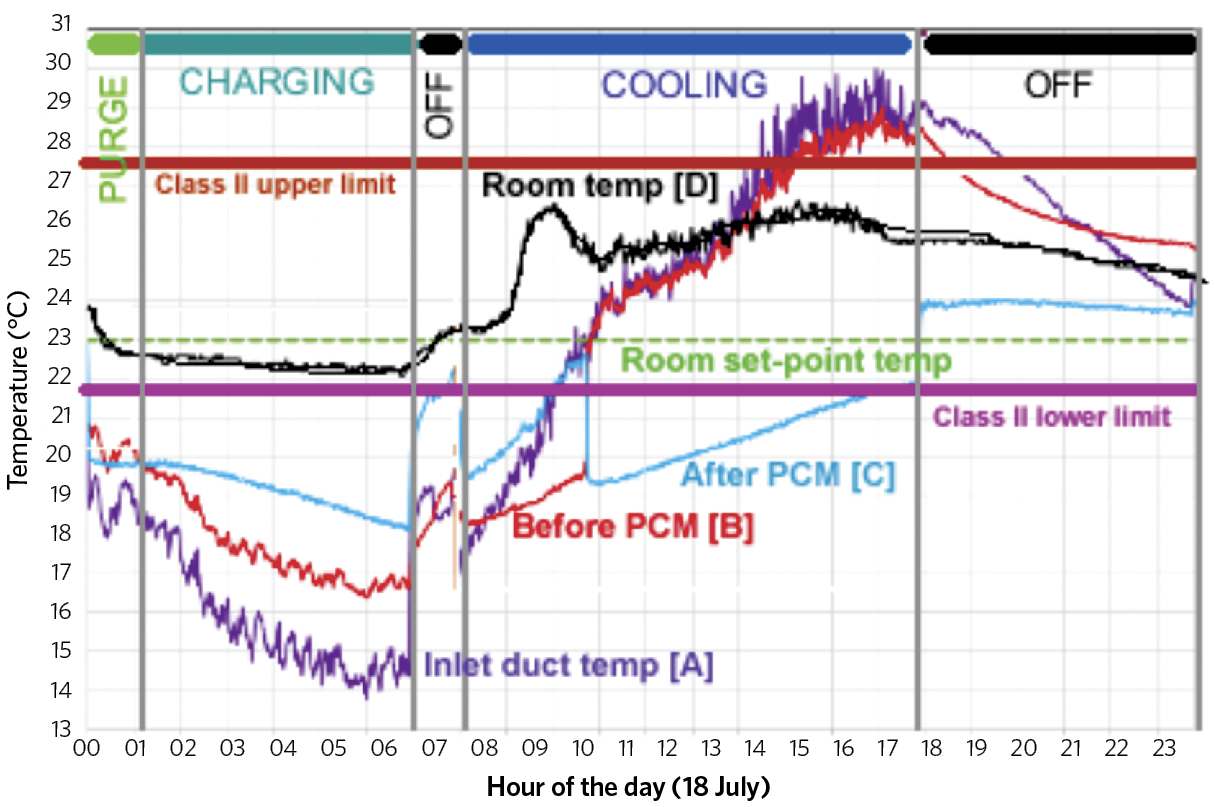 Figure 4: Measured summer temperatures for an open-plan office operation of a PCM-air heat exchanger unit for an example July day

System switched off (18:00 to midnight) – At 18:00, the conditioned period in the space ends, the system switches off, and all temperatures converge to the same value. The system remains off until midnight, when the process starts again.

Figure 5 shows the room temperature (red dots) in the open-plan office for one summer season. The system largely maintains temperatures within the limits of Class II thermal comfort, except during one week in July (upper limit) and in May (lower limit). The exceedance in May was because of low night temperatures, and during the night charging period the 18°C night cooling limit was reached swiftly. When the system was turned off at 07:00, the increase in temperature was not enough to reach the lower limit of thermal comfort at the commencement of the conditioned period. This behaviour of the control system is representative of the potential trade-off between sufficiently charging the LTES and cooling the space during the night, in preparation for optimum performance on a hot day, but causing the space to be too cool for thermal comfort if the morning (and day) turns out to be unusually cold for a summer period. This is a known issue, and it is highlighted in TM52 that the calculated lower limit of thermal comfort can be inappropriate on cold mornings during summer periods, so this is not considered a failure of the system. A recent study3 indicated that this system could offer acceptable thermal comfort throughout the day for a seated occupant level (0.7m from the floor) in the moderate weather summer conditions of south and west England, in accordance with the CIBSE adaptive thermal comfort criteria.

Figure 6: Examples of the different heat exchanger profiles under examination

Santos3 has indicated that changes in the control strategy can improve the performance of the system, but this will be limited by the cooling capacity of the PCM. Another option is to increase the heat transfer rate at the surface of the PCM by optimising the properties of the heat exchanger. Improvements in the heat transfer between air and panel will increase the equipment’s overall performance and deliver a faster thermal response, shorter charging period and reduced energy consumption. Santos4 analysed different surface designs, using CFD simulation, and compared their performance with the existing panel, but with different spacing between ridges, and ridge height and radius, as illustrated in Figure 6.

Simulations analysed the heat transfer between panel and air. This heat transfer is predominantly by conduction and convection, since it involves heat transfer because of a moving fluid. As PCM-air heat exchangers used for cooling deal with small temperature differences, radiation is neglected. 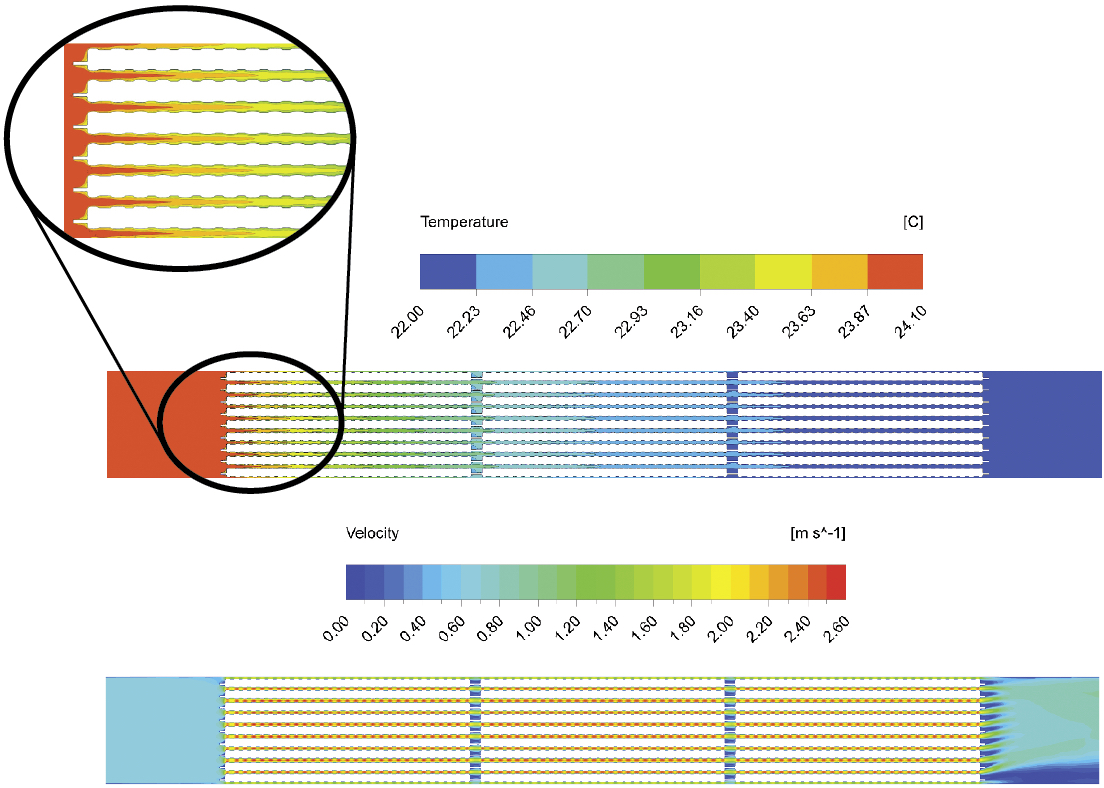 Figure 7: Temperature and velocity distribution of one design with an airflow rate of 260 litres per second

An example of the CFD output is shown in Figure 7, from a Shape 1 LTES design, comprising three stacks of PCM, each consisting of seven panels. The analysis identified a shape where a highest practicable heat transfer is achieved for most airflows – approximately double the heat transfer when compared with the existing panel.

The introduction of ridges, fins, dimples, grooves and/or bulges increases the heat transfer, but can also increase the pressure drop of the air flowing through the unit – so increasing fan energy cost and noise. To indicate if improvements in heat transfer are more advantageous than unwanted additional pressure loss, a heat effectiveness ratio of Nu to the cube root of pressure drop was applied to the developed shape. It gave an average effectiveness approaching 1.0, indicating that improved heat transfer had been achieved without excessive pressure loss. Other shapes that were tested had lower heat effectiveness.