Some estimate there are already approximately 20 billion devices connected to the Internet of Things1 (IoT) – and this staggering number is predicted to double by 2022. By comparison, the population of the world is just 7.6 billion. Although a large proportion of these devices are unlikely to affect the world of the building services engineer directly, there are ever more opportunities to use the IoT to enable both traditional – and novel – applications for measuring, supervising and controlling the built environment. And it is the IoT that delivers the connected devices and data streams that underpin the rollout of ‘smart cities’.

This CPD will give an introduction to the IoT, and explore some aspects of protocols and applications relevant to building services engineering.

The Internet of Things

Just as the adjective ‘smart’ has been appended by marketers to many seemingly mundane systems, so the phrase ‘Internet of Things’ has become increasingly commonplace in the lexicon of building systems. But, despite the possible hype, there are some great system applications emerging that merit serious consideration, and which can rightfully adopt the monikers of being ‘smart’ and ‘internet-connected’.

As discussed in the recent paper by Ted Saarikko2, the wider business benefit of the IoT in creating value can be a complicated – as well as an interconnected – process, involving multiple parties and perspectives. But, as he observes, ‘the potential payoff is signiﬁcant, as a connected product can provide valuable information regarding location, status and use – insights that, in turn, can be used to enhance efﬁciency in logistics, efﬁcacy in service and maintenance, and innovation in new product development’.

In practical terms, the IoT is a vast network of internet-connected devices that are able to collect and exchange data using embedded sensors that are, in some cases, able to directly modify their local environment. Advances in technology are driving the development of smaller, cheaper, less power-hungry ‘sensors’, with embedded autonomous computing and communication abilities, and onboard memory. The increasing availability of such widely distributed sensors at the ‘field level’ has coincided with the boom in ‘cloud’ storage. These work together with the massive computing resources now available to implement novel control methods, as well as opening up the potential of truly useful artificial intelligence (AI) in the operation of building systems. The recent paper from M Rinker,3 based on reviews undertaken up until 2016, indicates that the application of AI in building energy use prediction benefits significantly from the application of ‘ensemble prediction methods’ – those that effectively integrate multiple methods to improve output accuracy of the forecast. The ready availability of reliably collected data is essential to the successful implementation of such AI-driven energy assessment methods. Similarly, the impact of the potentially ‘ubiquitous’ sensor can provide continuous feedback from the built environment. This can enable continuous condition-based monitoring – for example by ‘listening’ to a fan coil – and allow user experience, through personal feedback devices, as input into the decision-making for design4 and operational strategies.

There are many technologies being employed to make the connection between devices, sometimes referred to as ‘endpoints’, in a building – such as occupancy detectors, temperature sensors, cameras, or microphones – and the wider network, through some form of network gateway. 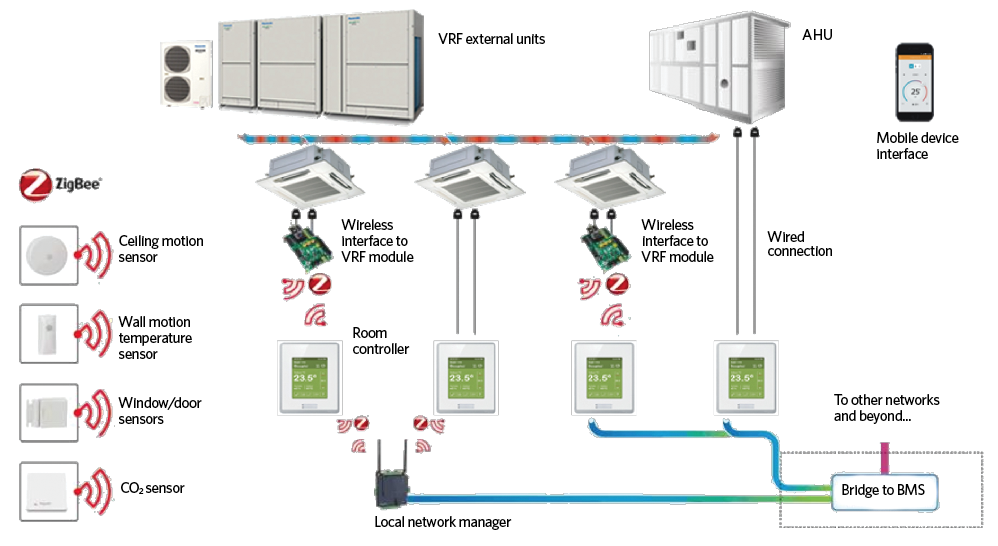 Wireless networks are increasingly replacing the requirement for physical connections in many building services applications. The communication with these field-level devices is known as the ‘physical layer’, in terms of network topologies. Articles by Anna Gerber5 and Brian Ray6 present and discuss the principal variants that currently provide the physical layer – their descriptions are abstracted and augmented below:

Low-power wide area network (LPWAN) is a category of technologies designed for low-power, long-range wireless communication, so are ideal for use within large-scale deployments of low-power IoT devices such as wireless sensors.

Cellular (telephone) LPWAN NB-IoT and Long Term Evolution – category M1 (LTE-M) standards are aimed at providing low-power, low-cost IoT communication options via existing cellular networks. Narrow-band IoT (NB-IoT) is the newest of these standards and is focused on long-range communication between a large number of devices – although it is not yet practically available with many telecoms providers.

Bluetooth Low Energy (BLE) is a lower-power version of the widely used Bluetooth 2.4 GHz wireless communication protocol. It is designed for short-range (<100 metres) communication, typically in a star configuration, with a single primary device that controls several secondary devices. BLE also allows mesh connections so that each node in the system acts as both a wireless data source and a repeater – information from a single sensor node jumps from node to node until the transmission reaches the gateway. It is best suited to devices that transmit low volumes of data in bursts, as the devices are designed to sleep to save power when they are not transmitting data. Battery life can extend to months or even years.

ZigBee and Z-Wave. ZigBee has a similar range to BLE, of up to 100 metres, and has a slightly slower data-transfer rate than BLE. ZigBee is a mesh network protocol that was designed for building and home-automation applications. A closely related technology is Z-Wave, which is also based on IEEE standard 802.15.4 for low-rate wireless personal area networks. Z-Wave was also designed for home automation, and has recently been released as a public domain specification. Z-Wave’s interoperability layer ensures that devices can share information and so work together. ZigBee and Z-Wave are, by their very nature, short- to medium-range, and Ray6 reports a HVAC controls application where additional node ‘thermostats’ were needed in a building, solely to ensure that the ZigBee mesh connections consistently worked.

Radio Frequency Identification (RFID) tags store identifiers and data, and are attached to devices for one-way reading by an RFID reader. The typical range of a passive (battery free) RFID is less than one metre, while for active (higher frequency) RFIDs (with power source) it can be hundreds of metres. Active tags periodically broadcast their ID, while assisted passive tags become active when the RFID reader is present.

Dash7 is an open-source communication protocol that uses active RFID, and it is designed for use within industrial IoT applications for secure long-range communication. Signals can penetrate building fabric, so it is particularly suitable for building applications, and this can contribute to a low implementation cost.

Wi-Fi is standard wireless networking, based on several IEEE 802.11 specifications. 802.11n offers the highest data throughput, but at the cost of high power consumption, so IoT devices might only use 802.11b or g for power-conservation reasons. As longer-range and lower-power solutions become more widely available, it is likely that Wi-Fi will be superseded by lower power alternatives.

The global access that IoT offers to building systems introduces new security risks and challenges to the devices themselves, their operating systems and – importantly – the systems to which they are connected. This was identified by Gartner7 as the No 1 IoT consideration for 2017 and 2018, where security technologies will be required to: protect IoT devices and platforms from information attacks (such as hacking and phishing) and physical tampering; encrypt their communications; and address new challenges such as impersonating ‘things’ or ‘denial of sleep’ attacks that drain batteries. 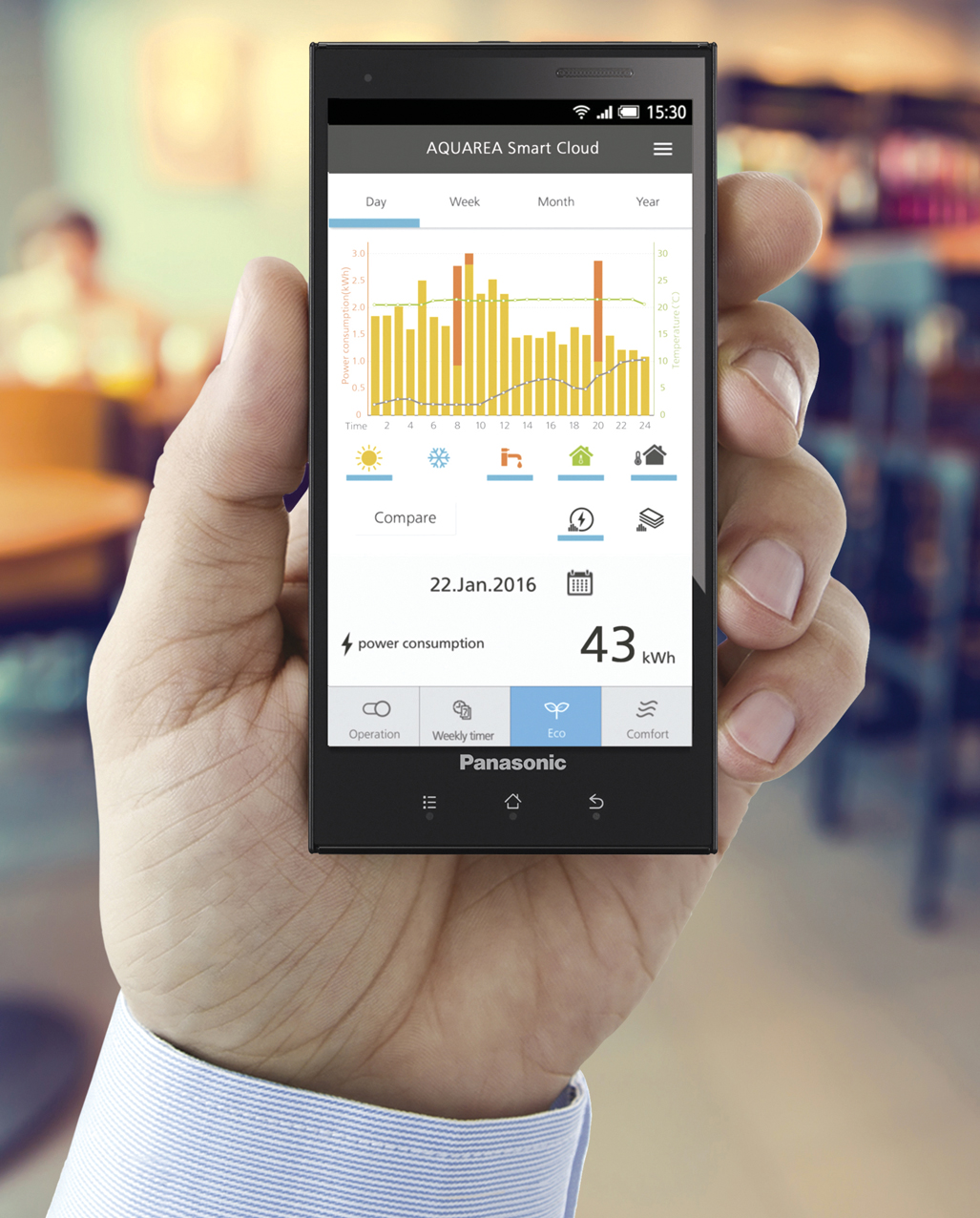 Figure 3: A smartphone offers an interface into the smart control system, allowing both monitoring and set-up (Source: Panasonic13)

The Gartner report highlights that threats will continue to emerge as hackers find new ways to attack devices and protocols, so ‘things’ that have long lives may need updatable hardware and software to adapt during their lifespan.

The scope of the threat is wide – and increasing – but is feasibly controllable, as with any building system, with proper supervision and maintenance. However, the risks are significant. Compared with traditional physical building systems, it is rather more challenging to be able to identify weaknesses in connected electronic devices, and it requires vigilant attention to the current status of connected components, as well as appropriate emerging technologies. This may include vulnerabilities across the whole connected system that have, for example, recently emerged in anything from the sensors8,9, through to the smartphones10 and computers11 that are used as human interfaces – as well as weaknesses in HVAC system security, allowing inappropriate access to interconnected systems.12 The paper by F A Alaba13 provides a far more extensive account of security risks practically posed by the IoT.

There would appear to be a role for a maintained operational building information model (BIM) that, as part of the building operation and maintenance – and beyond the building’s design and construction phase – keeps up-to-date security audits of connected devices, patches and user alerts, through linking to OEM databases.

A smart controller was applied in the variable refrigerant flow (VRF) system, as shown in Figure 1, to enable users to manage and monitor their indoor environment. This smart controller can interface with web-enabled devices, including web browsers, via a building management system (BMS), as illustrated in Figure 2, and smartphones, such as shown in Figure 3. Users are able to adjust the temperature in multiple zones and view the current, and historical, room conditions. This enables users to prevent such things as conditioning unoccupied zones, and can allow the simple resetting of set-point temperatures if the use of the zone is changed. 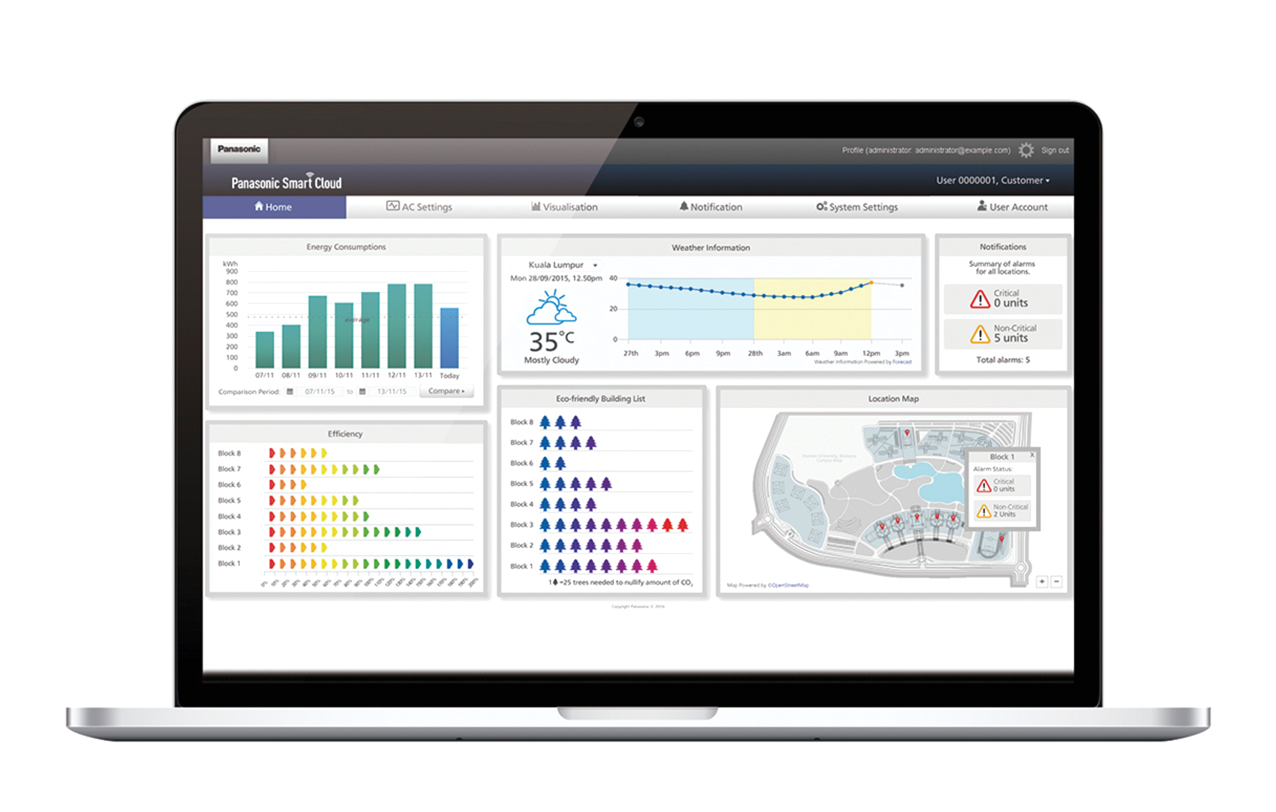 The smart system can draw on information from occupancy sensing – using passive infrared (PIR) sensors and/or door sensors – and indoor air quality (IAQ, normally using CO2 and/or VOC sensors), together with humidity and temperature sensors. This enables the room to be operated at different conditions depending on rules that define its use. The management gateway can connect to the wider BMS – which could bridge to protocols such as Modbus, LonWorks and BACnet. This allows the system to draw on inputs, such as external conditions and potentially energy tariffing information. And by linking through the wider network to, for example, separate room-booking systems – or, potentially, by reacting to data from RFID tags in digital room keys or those held by facilities staff – system operation can be automatically adjusted.

Remote access, through the internet, enables specialist installers to offer ongoing maintenance contracts. Maintenance teams can be engaged in preventative monitoring and adjustment that keeps the air conditioning system operating at its optimum level. By anticipating needs, the likelihood of a system breakdown is minimised, and the useful system life can be extended. Response time is reduced for the rectification of faults and implementing changes, so contributing to improved end user satisfaction.