The so-called ‘performance gap’ between the designer’s expectation and reality of the building operation has highlighted the need to assess properly the post-construction thermal characteristics of buildings. The co-heating test is widely used throughout Europe to measure the total heat transfer from buildings and to calculate the building ‘heat-transfer coefficient’ (HTC) (W·K-1). This article reports on a project aimed at assessing the practical reliability of the current application of co-heating tests to evaluate a building’s HTC.

Whole-house performance measurements have shown that the ‘performance gap’ exists and, in the vast majority of cases, the energy consumption and the total heat loss through the building fabric are higher than predicted. This includes existing, newly built and recently retrofitted dwellings, as well as flagship high-performance projects. This is likely to be caused by a combination of factors, including underperformance of individual building elements and a lack of airtightness, but also thermal bridging and missing insulation. So a reliable test of the whole house is needed to provide an accurate reflection of real performance.

The co-heating test is a pseudo-steady-state test, where the amount of energy required to maintain a constant, raised, indoor temperature is measured, as well as the total heat-transfer rate. The resulting HTC is a measure of average steady-state heat flow from the building for each 1K of temperature difference between the internal space and the outside (ambient). This test has existed since the early 1980s, and has been more widely used in the past 10 years in the UK and the rest of Europe. An industry-standard protocol for carrying out the measurements and for analysing the data is yet to be established, even though the co-heating test is already offered commercially.

The thermal performance of a building fabric can be described by two main heat-flow mechanisms: heat transfer through the fabric of the building, including the net energy flow through glazing and heat bridges; and heat lost as a result of air infiltration.

For the co-heating test, the total heat input rate to the building – provided by electrical heaters (installed for the test) and solar heating – is assumed to be equivalent to the total rate of heat loss from the building, so can be used to evaluate the building HTC.

A = total area of each building element (m2)

V is the internal heated volume of the building (m3)

The Building Research Establishment (BRE), at Garston, Hertfordshire, UK, gave access for the project to test a pair of identical, adjacent, well-insulated and well-constructed detached test houses (Figure 1). These, effectively, have thermal performance similar to – but slightly worse than – that required by 2013 English Building Regulations. Using the UK government’s Standard Assessment Procedure (SAP), the houses had a previously evaluated HTC of 68.4W K-1 (fabric 65.9W K-1 and infiltration 2.5W K-1). 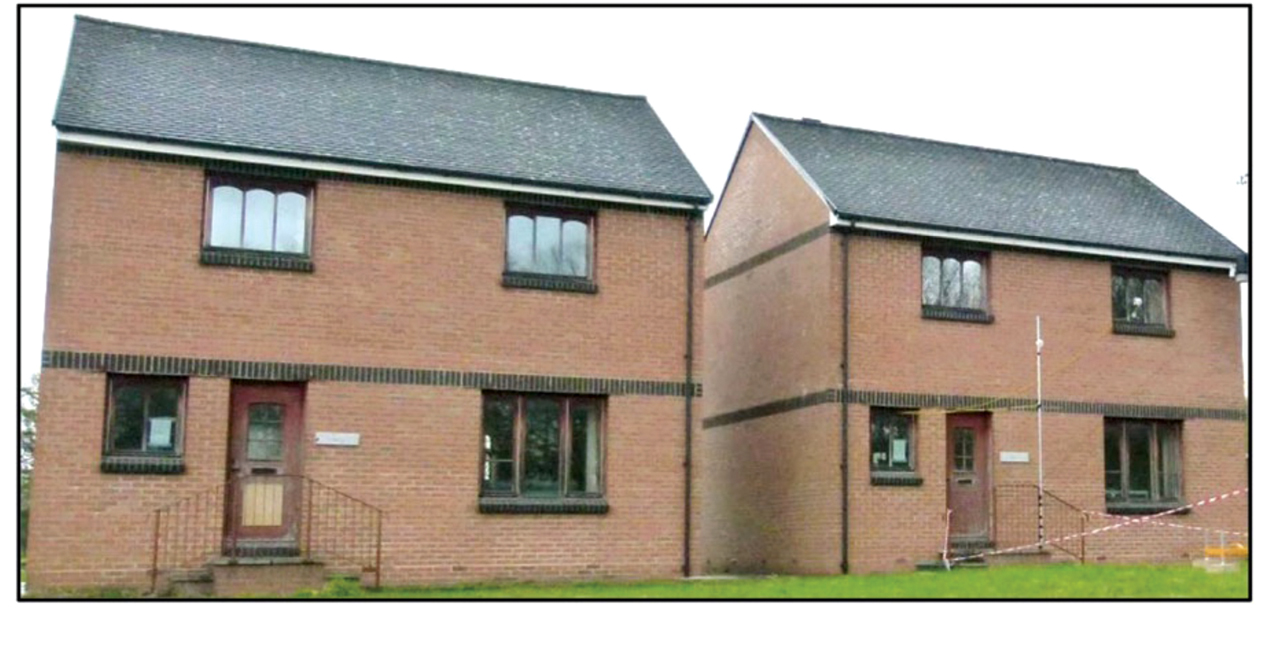 Seven teams from different organisations successively undertook co-heating tests on the same house, and BRE did coincident tests in the other house. To enable the full range of possible co-heating methods to be used, no guidance was given to any team on the design and planning of their data-collection or analysis procedures.

The test teams had different levels of experience, with one performing its first-ever test. The seven test teams used an experimental method broadly similar to that published by Johnston et al,1 but all had some variations. One team didn’t complete the exercise because of equipment failure.

During the test, the air temperature inside the building was maintained – using electrical heating equipment – at a constant raised level (mainly 25°C) for approximately two weeks, with fans used to mix the house air with all internal doors open. Co-heating tests are traditionally undertaken over periods of between one and three weeks. Maintaining a constant internal air temperature throughout the building is vital in a co-heating test to ensure accurate measurements of the whole building’s performance. This was achieved by the test teams employing proportional-integral-derivative (PID) temperature-controlled heaters and mixing fans, at least one in each large room.

The electrical energy consumption required to maintain the temperature was recorded, together with the weather conditions – in particular, the ambient air temperature and solar irradiance.

Six methods of estimating solar gain were used in the project; most required some measurement of the total solar irradiance – and subsequent analysis and data manipulation – and one avoided the need for any solar-irradiance measurement. The solar gain was included in the energy balance; even during winter months, it is likely that significant solar gains will occur. Solar gains were mainly estimated from multiple linear regression techniques, though some used calculations based on glazed area and G-values. Most of these methods account for shading implicitly. The solar gains through opaque elements were ignored, and the project took no account of heat stored in thermal mass during the day.

The HTC was determined by plotting the rate of heat input – both electrical and solar – taken over a 24-hour period against the 24-hourly average air temperature difference between the inside and outside of the building (Figure 2), with the gradient providing the HTC. Using daily averages assumes that any solar gains only affect the internal thermal conditions on that day, whereas the impact can actually be carried over to subsequent days, by storage in a building’s thermal mass.

Figure 2: Example of a co-heating analysis plot. The heat-transfer coefficient (HTC) is taken as the gradient of a line of best fit, forced through the origin (in this example, HTC is 74.4W·K-1)

In this project, most test teams carried out only one whole-building, air-infiltration-rate measurement. Generally in co-heating tests, the air-leakage rate can be measured before a test, after a test, or both, and the results averaged, as the co-heating test may cause drying of materials – potentially altering the infiltration rate (all ventilation-specific openings are closed off during the tests).

The method used to account for solar gains remains an area of uncertainty and produced most variation between the test teams. However, the analysis indicates that the co-heating test is robust to small changes in the solar-gain analysis method, so any of the methods studied would be suitable for general use. It is likely that the uncertainty in the HTC will be higher in periods of higher solar irradiance, when solar gains are likely to represent a larger contribution to the total heat input and so could impact on the accuracy of the derived HTC. In the development of a future standard test method, it may be necessary to define a set of limiting external conditions under which the test can be applied. That could include maximum solar irradiance figures, but also extend to include other parameters, such as wind speed. To achieve the highest possible repeatability, a common orientation for solar-irradiance measurements – together with a single analysis method for defining solar input – will need to be defined. The method used for the estimation of solar gains should be clearly reported.

Variations in wind speed affect the infiltration rate and have a small effect on heat transfer at external surfaces. However, it can be difficult to find a suitable location for wind measurements that is free of local disruptions to the airflow, so local weather-station data can be used as available. Analysis can be undertaken to account for the influence of variations in wind speed, together with solar irradiance and indoor-outdoor temperature difference, and a value of HTC can be so determined at a zero wind speed. However, it is reported that this approach is prone to inaccuracy because of complex interrelations between variables specific to each building, such as sheltering, orientation, airtightness, location, and leakage paths.

The HTC is determined for the weather conditions at the time of the test, but U-values are typically calculated for an assumed wind speed of 4m·s-1, so it may be considered more suitable to normalise the HTC to a wind speed of 4m·s-1. However, a significant relationship between wind speed and power consumption is rare, because wind effects are generally small and cannot be isolated from other influencing factors. As an acceptable method to account for varying wind speeds and sheltering has not been developed, it is recommended that the HTC be reported with no adjustment for wind speed – although daily mean wind speeds should be recorded.

The limiting conditions may be linked to the specific building under test, as uncertainty, for example, will be higher for buildings with a lower HTC, so the limits on environmental conditions may be more stringent. However, no significant relationship was found between the evaluated HTC and external temperature, solar irradiance or wind speed that indicates repeatable HTC measurements were possible during different weather conditions. It is, of course, the lack of steady-state that necessitates co-heating tests being carried out over an extended period.

The research team examined the uncertainty in the values of HTC determined by the six test teams (Figure 3) resulting from the aggregate measurement uncertainties in the three key measurements:

(This project had insufficient data to conclude on the most appropriate solar-gain analysis method of the seven employed.)

The estimated general uncertainty in the overall HTC measurement was ±8% and is similar to the actual variability of ±10% in the measured HTC values. Differences in the data-collection methods observed in this project were minor in comparison with those observed in the data analysis, with a best-practice approach clearly emerging. A slightly lower uncertainty could be expected if all the data were collected using the same method and with the same equipment.

Figure 3: The HTC reported by the six test teams that completed the exercise

The results indicate that the co-heating test is reasonably robust to different measurement methods, weather conditions and data-analysis methods. This project was performed using a single detached house, and further testing in a wider sample of houses, designs and situations is recommended as the next step towards the development of a standardised co-heating test. For the construction industry to adopt a co-heating protocol, further development will be needed – not least because housebuilders are likely to be reluctant to have properties vacant for a two-week test. Research is already under way to develop methods that can be completed in a much shorter timeframe, or that can be applied in occupied dwellings.

Despite differences in the weather and in the experimental and analytical approaches, the test teams’ reported HTC measurements were within ±10% of the mean, and uncertainty analysis – based upon a 95% confidence interval – resulted in an estimated uncertainty in HTC measurements of ±8%. By comparison, observed differences between the as-built HTC and the predicted HTC have been reported as 100% or more. It is likely that the repeatability of the test could be improved, given the application of a standardised best-practice protocol being employed by trained and experienced test teams. Increased confidence in the reliability of the co-heating test could lead to its adoption and use by the industry and regulators as a quality-control and compliance tool.

■ This CPD article is wholly based (with the authors’ permission) on First evidence for the reliability of building co-heating tests by Richard Jack, Dennis Loveday, David Allinson and Kevin Lomas, Building Research & Information, DOI: 10.1080/09613218.2017.1299523.