Following the introduction of EC Regulation 517/2014, which came into force on 1 January 2015, there is a timetable that will lead to a reduction in hydrofluorocarbons (HFCs) available on the market to 21% of 2015 levels by 2030. This requires some advanced planning to avoid both installing systems based on technology that potentially could become redundant during their normal life-cycle, and delivering solutions that reduce overall environmental impact. This article will consider alternative solutions, focusing particularly on HFO refrigerants. 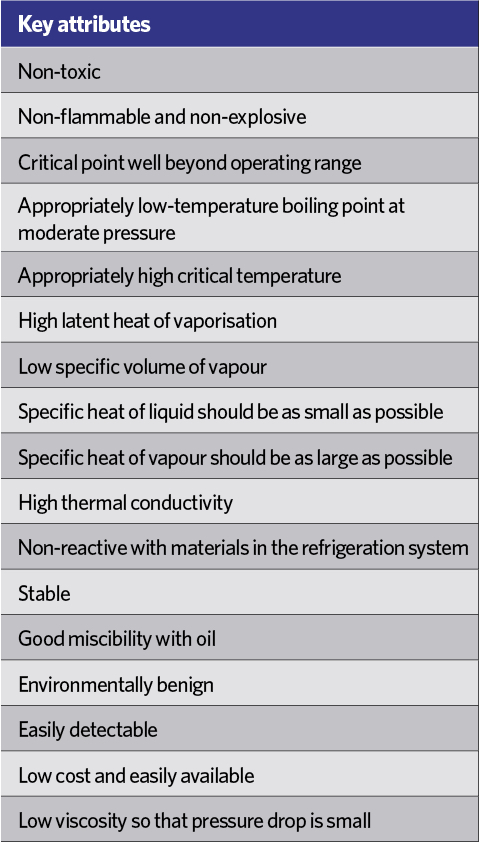 Table 1: Some key attributes for a refrigerant applied in a vapour compression system

The refrigeration machines of the early 19th century used the natural – and ‘green’ – refrigerants of water and air. The early Perkins vapour compression machines of the 1830s used volatile (diethyl) ether, setting the path towards the development of purpose-made chemicals that provided the best compromise for successful applications in refrigeration. There are many attributes (some illustrated in Table 1) that contribute to an effective refrigerant – some of which are tied to particular applications and refrigerants. Many of the early refrigerants, including ammonia, methyl chloride and sulphur dioxide, were flammable, toxic or both.

Working at US company General Motors in the 1920s, Midgley and Kettering developed a non-toxic, non-flammable, stable and efficient chlorofluorocarbon (CFC) – containing carbon, fluorine and chlorine atoms – initially by creating the refrigerant now categorised as R12. This was considered a miracle compound up until the 1970s, when it was established that the use of CFCs was the main cause of ozone-layer depletion. It was also later identified as a contributor to global warming. In 1987, CFCs were banned by the Montreal Protocol, so accelerating the development and application of more ‘ozone-friendly’ refrigerants. R134a, for example, was developed as a replacement for R12 and – as it shares very similar properties – has become commonly used in medium- to large-scale water chillers, as well as in the automobile industry.

However, despite the lower ‘ozone depleting potential’ (ODP) of the hydrochlorofluorocarbons (HCFCs) – containing hydrogen, chlorine, fluorine, and carbon atoms – such as R22 and R123, and HFCs such as R134A and R410A, they have subsequently been identified as significant contributors to ‘global warming’. 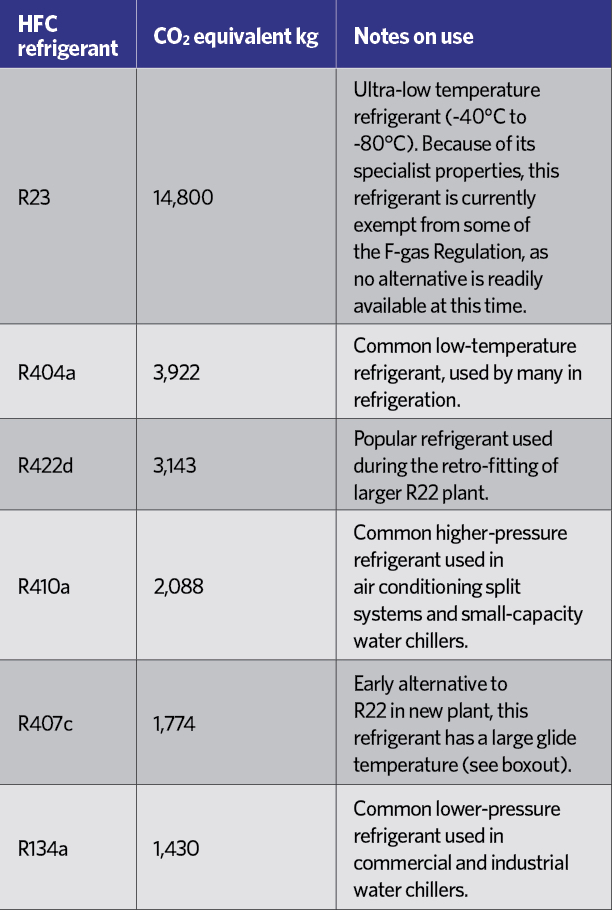 HCFCs have been practically banned since January 20151, and HFCs are rated in terms of their ‘global warming potential’ (GWP) – an equivalent mass of CO2, as shown in Table 2. Although R134a is not considered to have a high GWP, each kilogram is equivalent to 1,430kg of CO2, which in the short-to-medium term is not considered environmentally acceptable, and – in common with other HFCs – it is covered by the EU’s F-gas Regulation.2 This includes a staged reduction in the use of HFCs in the years to 2030. Table 3 indicates the percentage of the HFC baseline that will be available to the EU market each year, moving towards the 2030 target, with specific targeted reductions as shown in Table 4.

The F-gas Regulation phasedown programme is constructed so that – over the next 12 years – end users and manufacturers will be drawn to using refrigerants with a lower GWP, because the production quotas will increase their availability and so make them relatively economical.

CIBSE5 Guide M indicates that water chillers have a life expectancy of between 15 and 25 years, depending on whether they are air- or water-cooled, and on the environment within which they operate. So, for new systems currently being installed, there is a good chance that they will be in service throughout the whole HFC phasedown period. As such, it is timely to evaluate alternative refrigerant systems. 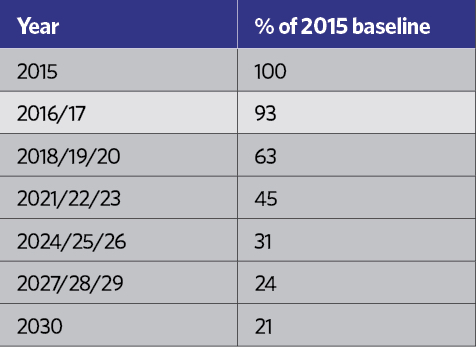 Table 3: Percentage of the HFC baseline that will be available to the EU market each year

There has been a resurgence in the development of modern technologies to make safer use of ‘natural’ refrigerants as an effective alternative to HFCs. These include ammonia R717, CO2 R744 and hydrocarbons – isobutane R600a (often used in domestic fridges and freezers) and propane R290 (used in commercial heat pump and refrigeration applications). These are all successful, but each has operational challenges, such as high pressure and concerns about flammability, explosions and toxicity.

So the quest for a safe, efficient, and – crucially – environmentally friendly refrigerant has continued, leading to the application of hydrofluoroolefins (HFOs), containing hydrogen, fluorine and carbon.

Unlike traditional HFCs and CFCs, which are saturated, HFOs are olefins – so called because they form oily liquids on reaction with chlorine gas – that are unsaturated because of the carbon-to-carbon double bond in their structure. HFOs are relatively stable compounds, but are more reactive than HFCs because of the reactivity of the carbon–carbon bond. This reduces their GWP, with an atmospheric life of 18 days compared with the 13 years of HFC R134a. However, the zero ozone-depleting HFO still mimics much of the basic performance and properties of R134a.

HFO refrigerant as a ‘green’ replacement for HFCs

The principal HFO that has been applied for non-vehicle refrigeration is R1234ze(E), while R1234yf, typically, has been applied in vehicle mobile air conditioning (MAC). R1234ze(E) has operating conditions and costs in line with R134a – as indicated in the pressure-enthalpy diagrams for R134a and R1234ze(E) in Figure 1, and the key attributes in Table 5 – but with ultra-low GWP. Its performance is such that it can replace R134a in new equipment, where its lower volumetric capacity can be addressed in the design of the equipment. 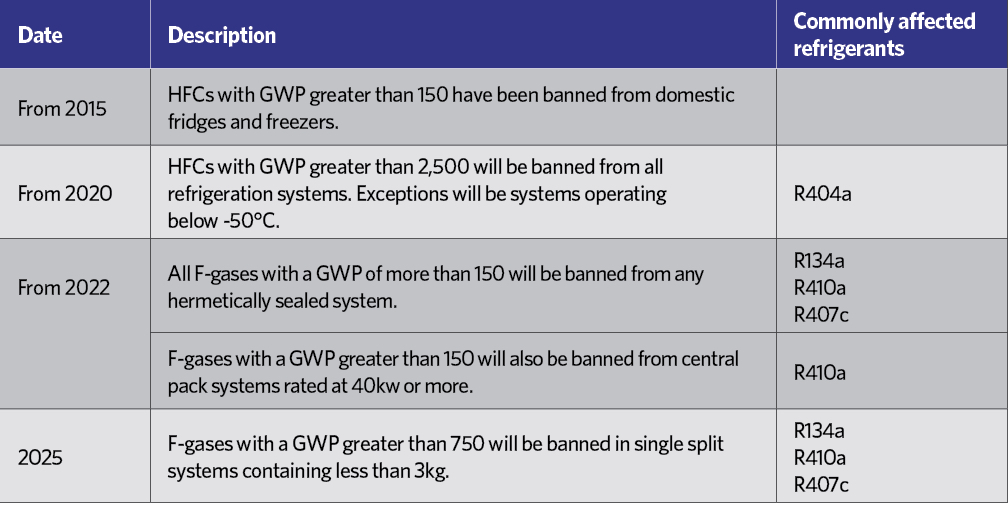 A number of concerns have arisen about the safety of HFO refrigerants, including issues such as flammability, potential of hydrogen fluoride formation and formation of trifluoroacetic acid (TFA).

The volumetric refrigerating capacity of R1234ze(E) is below that of R134a and it has a higher boiling point. So R1234ze(E) cannot be considered as a drop–in replacement of R134a, but, instead, should be considered in new equipment designs.10 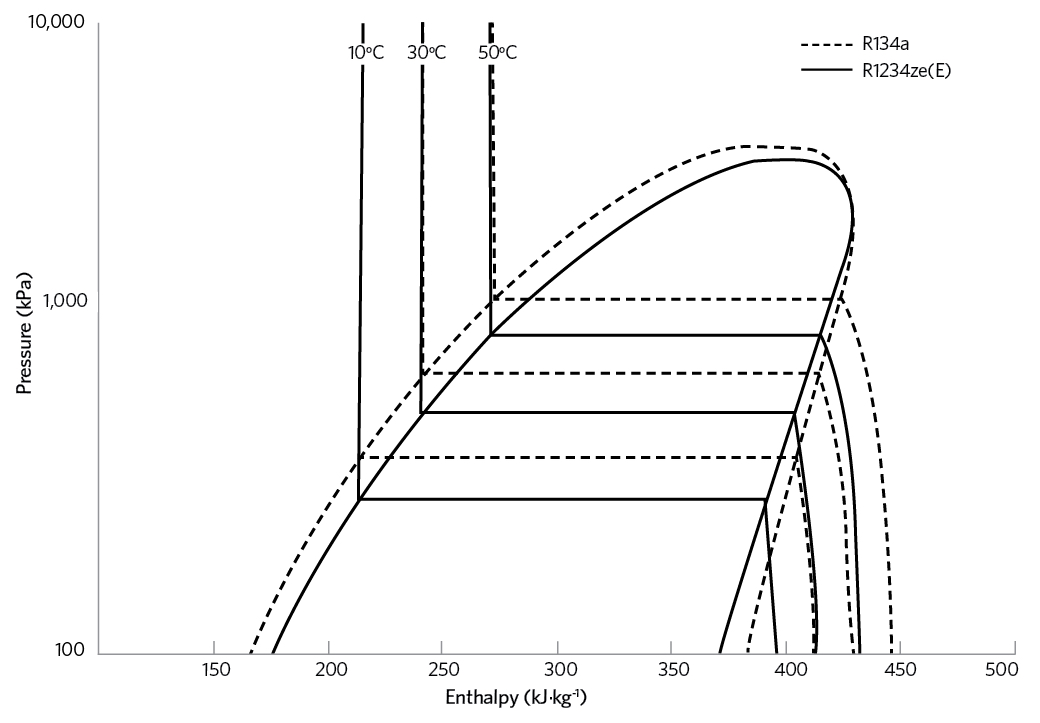 Field tests of optimised chillers designed specifically to operate on R1234ze(E) have confirmed that the coefficient of performance (COP) is higher than the HFC refrigerant system it is designed to replace. Operational tests have found that R1234ze(E) consumes significantly less energy than R290 (propane) – its closest ultra-low GWP rival – but without the same flammability risk and consequent additional safety considerations. Table 6 shows the comparative performance of three identical capacity and footprint air-cooled chillers. The R1234ze(E) chillers in this comparison have been under development by the manufacturers since the ready availability of the refrigerant in 2012.

Similarly favourable results were reported by Kabeel et al12 in 2016, when they undertook an experimental study into employing R1234ze(E) for a walk-in cold room. 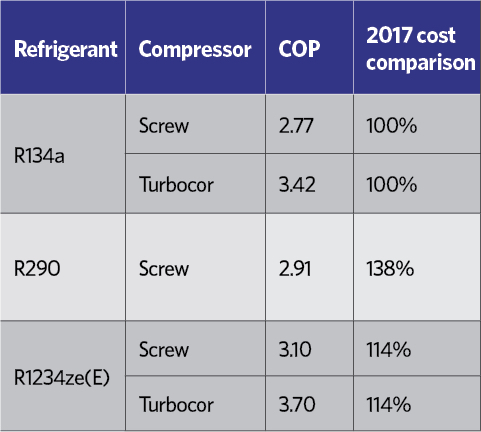 It is considered that the differential in the costs of the R1234ze(E) compared with that of R134a will disappear over the next 24 months, as production volumes of the HFO refrigerant increase and the F-gas quotas start to affect R134a prices.

HFOs can also be used as a component to produce a lower GWP refrigerant mixture containing HFCs. Several of these are already supported by some compressor manufacturers, but reliability issues have been raised because of high compressor discharge temperatures compared with their HFC predecessors.

This is an exciting time for the application of novel refrigeration solutions for building services engineering. To meet the legislative and environmental demands, there are several developing technologies – both traditional and new. Meanwhile, the application of recently evolved refrigerants, such as R1234ze(E), can meet the demands of both low ODP and low GWP, while maintaining good COPs, and so reducing consequent CO2 emissions.