This article explores some of the key factors that influence the successful supply of potable water to buildings, and considers the benefits of employing metal pipework with press connection joints as a means of distribution.

Clean drinking water, and water classed as potable, is a requirement for maintaining the health of building occupants. Regulations that complement – or lead – national regulations are produced under the auspices of the European Union (EU), which, in turn, draws on the guidance from the World Health Organization (WHO). WHO has very recently (2017) updated and republished its Guidelines for Drinking-water Quality1 and – although it clearly states that ‘nature and form of drinking-water standards may vary among countries and regions’ – there is a common, universal, base standard.

This very accessible WHO document not only gives the limit values for aspects (microbial, chemical and radiological) that will affect human health, but also includes acceptability aspects (taste, odour and appearance) that are aimed at the whole gamut of water-supply systems, ranging from those serving large metropolitan areas through to the domestic outlets in individual dwellings. It defines the roles and responsibilities for those involved in the chain of ‘drinking-water safety management’, from the country and regional ‘environment’ agencies that oversee the accumulation, storage and distribution of water, through to the water agencies, vendors and end consumers. Each will have a significant impact on the healthy supply of water, and the guidance gives a detailed framework for the proper management of the water supply at each stage of its journey to the consumer. Of particular interest to the building services community is the specific note that ‘significant adverse health effects have been associated with inadequate plumbing systems within public and private buildings, arising from poor design, incorrect installation, alterations and inadequate maintenance’. 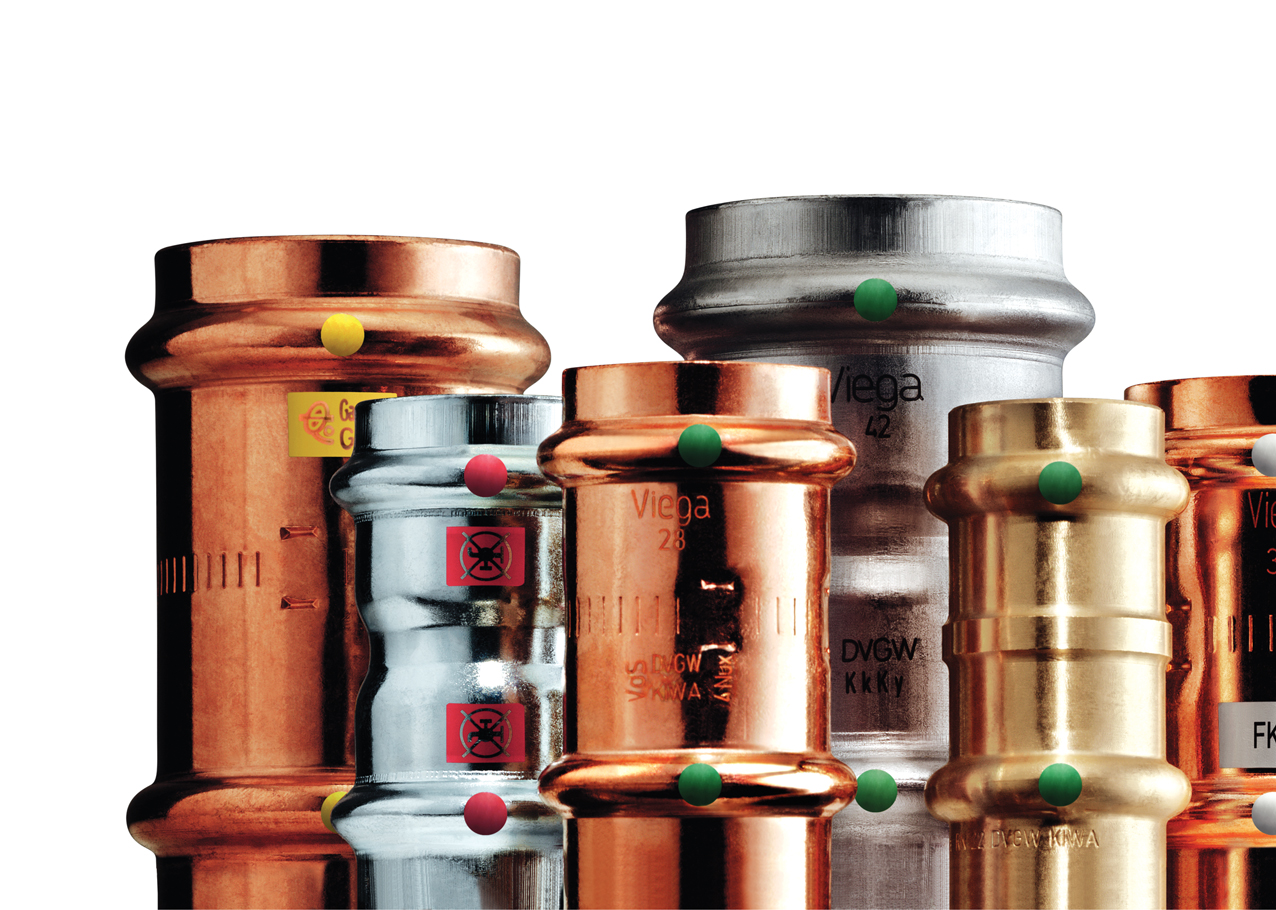 Figure 1: An example range of press fittings used for copper pipework. The green dots indicate that the fittings are suitable for drinking water, while yellow is used for gas installations and red for heating (Source: Viega)

The principal 2017 alterations to the WHO guidance feature updates for a number of potential contaminants, including lead. Additional guidance on risk management and monitoring of lead is provided, alongside new guidance on microbial risk assessment. This covers the positive or negative influences of aggregating multiple barriers for overall water-treatment performance, and microbial-detection and data-collection methods.

The 1998 European drinking water directive2 drew on the WHO guidelines. This provided a minimum standard across the EU for water for human use – for drinking, cooking, preparing food and domestic use. This quality level must be observed at all water-delivery points, whether for hot or cold water. In the UK, water designs must comply with the minimum requirements of British Standards, Building Regulations (Building Standards in Scotland), the Water Supply Regulations 1999, and the Water Supply (Water Quality) Regulations 2000. These, in turn, draw significantly on the EU and WHO standards. (CIBSE Guide G Public health and plumbing engineering3 gives an extended commentary on legislation, standards and codes.)

As discussed in CIBSE Guide G, the main aim of the UK water regulations is the prevention of contamination. That contamination can occur in many ways – for example, by:

All components of a drinking-water installation must be supplied to the building site in a hygienic state. In the manufacturing processes, dry leakage tests are preferred, to exclude the opportunity for microbial risk developing in the tubing. If residual water is left in a fitting after a leakage test using water, it is possible that micro-organisms will establish during potentially long storage times, particularly in the summer months. For example, a manufacturer reports that the drinking-water installation at a clinic has had to be continually disinfected with chemicals since 2006, because the newly installed pressure-booster system was contaminated with Pseudomonas aeruginosa bacteria when it was supplied and commissioned. This organism can cause a wide range of infections, particularly in those with a weakened immune system4. The contamination is thought to have been caused by a wet leakage test in the factory. Residual water in carbon steel pipework (prior to filling the system) can also accelerate corrosion and affect the life expectancy of the piping. This can be particularly significant in ‘thin-walled’ piping. 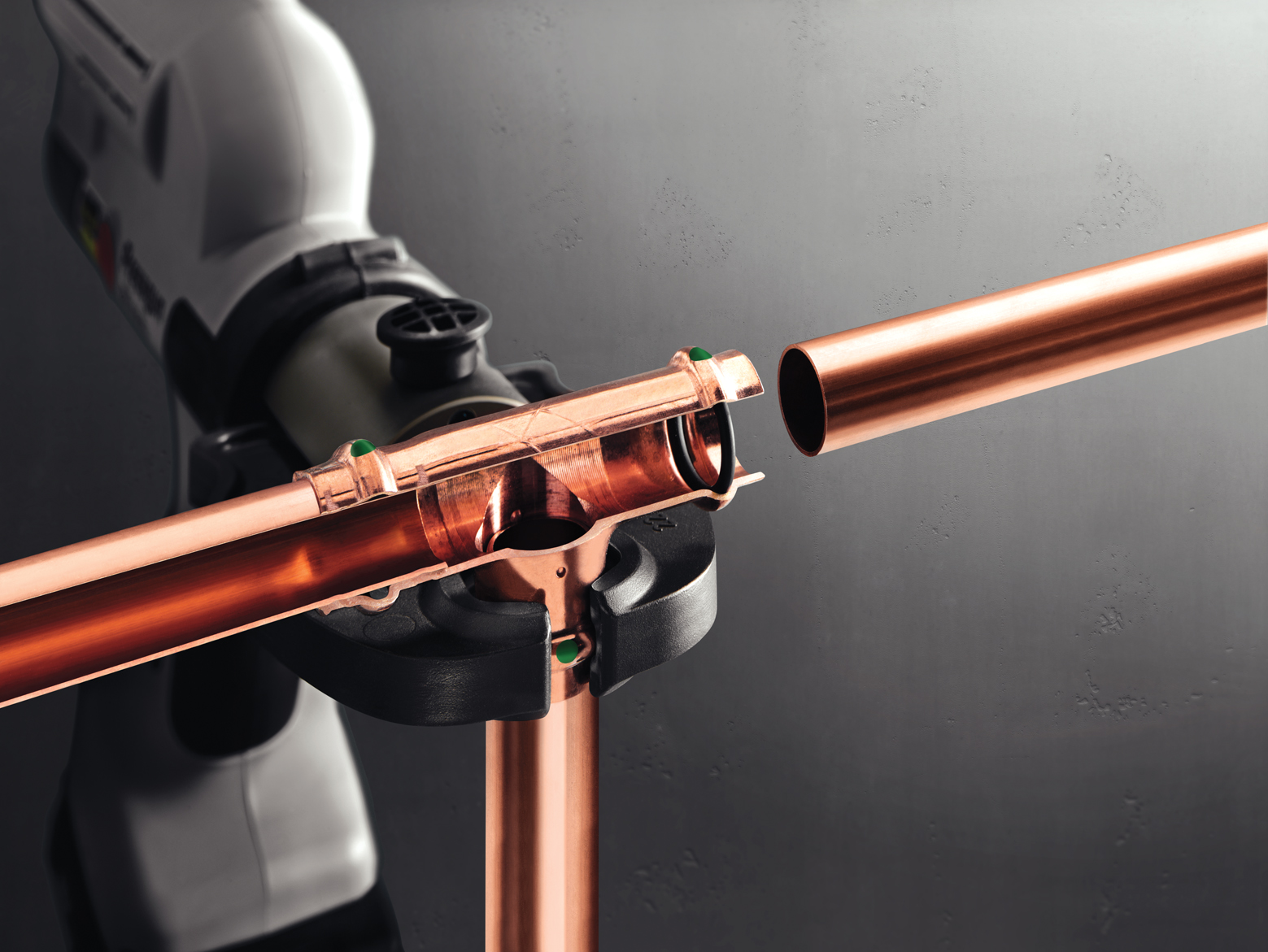 Figure 2: A cutaway of a tee connection, showing the jaws of a hand-held pressing tool

The storage of pipes and fittings should always be carried out in a way that excludes any penetration of dirt and contaminated water. Because building phases often last for long periods of time, there is a great risk of contamination occurring in the components, even before the system is commissioned. In Germany, dry leakage tests have become standard in large installations such as hospitals or hotels, because of hygiene concerns. Pipes can be supplied fitted with end stoppers, so that hygienic transportation can be guaranteed. Similarly, protective caps – for sealing riser pipes during assembly – reduce the risk of contamination from dust and chemicals, such as timber treatments, insulants and surface finishes. Although such contamination is normally not considered critical in terms of microbiology, it may require a significant flushing effort to clean such deposits from the network of pipes before operation. The flushing of the installation should take place as late as possible in the contract period, prior to handover.

Repair works and additions to existing systems can be far more critical in terms of hygiene. As a result, the risks for drinking-water quality – and, as such, the safety objective of ‘health’ – may need to be considered more critically during work on older systems, or when dealing with operational breakdowns, than during installation work in a new build. For example, a qualified fitter should know to wash their hands thoroughly after working with contamination – for example, in an existing drainage system – before continuing to work on a drinking-water installation. Appropriate hygienic procedures should be in place to ensure fittings and pipework that are subsequently used for work on existing pipe have the same rigorous control – in terms of storage and disinfection – as would have been essential in the original installation and proving process. Some fittings manufacturers supply their products in individually controlled packaging, and the fitting should only be removed directly before use, which means they require no disinfection.

The choice of the material for an installation is made using technical and economic aspects. Materials and products must meet the particular requirements, as determined by local needs and the properties of the water. CIBSE Guide G recommends that, before the type of material for the piping of a water-distribution system can be selected, the following must be considered:

Characteristics of the water supply

Coefficient of friction of materials

There are particular applications for which metal pipework is a preferred option. For example, where having fewer fixing points along the pipe length is beneficial; where there is limited space to allow for pipework expansion; where improved resistance to fire is an advantage; or, simply, for aesthetic purposes. There can be advantages when combining two systems – using copper or stainless steel for the underfloor and riser pipes (offering benefits such as rigidity and continuous earthing potential), and then employing the flexibility of plastic distribution pipes on the final pipework to outlets.

In the UK, the use of press connection technology – such as the range shown in Figure 1 – has become more common over the past 10 years, having been widely employed in Germany and other parts of Europe for more than 50 years. Press fitting can offer a fast and easy method of connecting pipework as a fire-risk free alternative to soldering, brazing and welding – and it eliminates the need for ‘hot work’ permits to work. This can be particularly beneficial in confined spaces or sensitive buildings – such as heritage sites – where hot works are impractical or deemed to present an excessive risk.

Press connection can be used on copper, steel and stainless steel pipe, and some specialist alloys. Using a handheld tool (such as that shown in Figure 2 – either manual, cordless or mains-powered), the fitting is pressed around the pipe. The speed of fitting – including the advantage of the installer working at the point of installation, rather than shuttling back and forth to machinery in another location – and reduced mess (swarf, oil, sealing hemp from threading or grooving) are often cited as key benefits of employing press fitting.

It is also considered to be at least 30-50% quicker than brazing or soldering, and up to 60% quicker than threading or grooving for thick-walled steel tube. Another key practical benefit reported by operatives is the ability to work on existing systems while the pipework is still wet.

Most manufacturers’ press connections include mechanisms to readily detect when the fitting has been installed without having been finally fixed by being pressed (as in the example in Figure 3). Otherwise, there is a risk that a fitting could have been temporarily located where the o-ring would maintain a marginal mechanical fixing, but – when the system is subsequently charged to working pressure – the fitting and pipe will come apart.

The relevant UK legislation relating to drinking water is available through a single web page overseen by the Drinking Water Executive.

CIBSE Guide G 2014 Public health and plumbing engineering is a good up-to-date guide to this area, with an updated approach that addresses criticisms of earlier editions that had been thought to oversize pipework.

And, of course, the WHO document is freely available on its website, alongside a whole host of supporting reports and guidelines.