Not only does evaporation drive global weather systems and reduce ambient dry-bulb temperatures, but its significant sensible cooling power has also been employed by humans for thousands of years to improve comfort. Evaporating water can provide a ‘free’ – or comparatively low-cost – source of cooling for buildings. This article will consider the evaporative cooling process as used in building environmental systems.

To get the most benefit from this article, a basic understanding of psychrometry is required. For a refresher on the application of the psychrometric chart and the associated air processes, see CIBSE Journal CPD modules 3, 7 and 9. 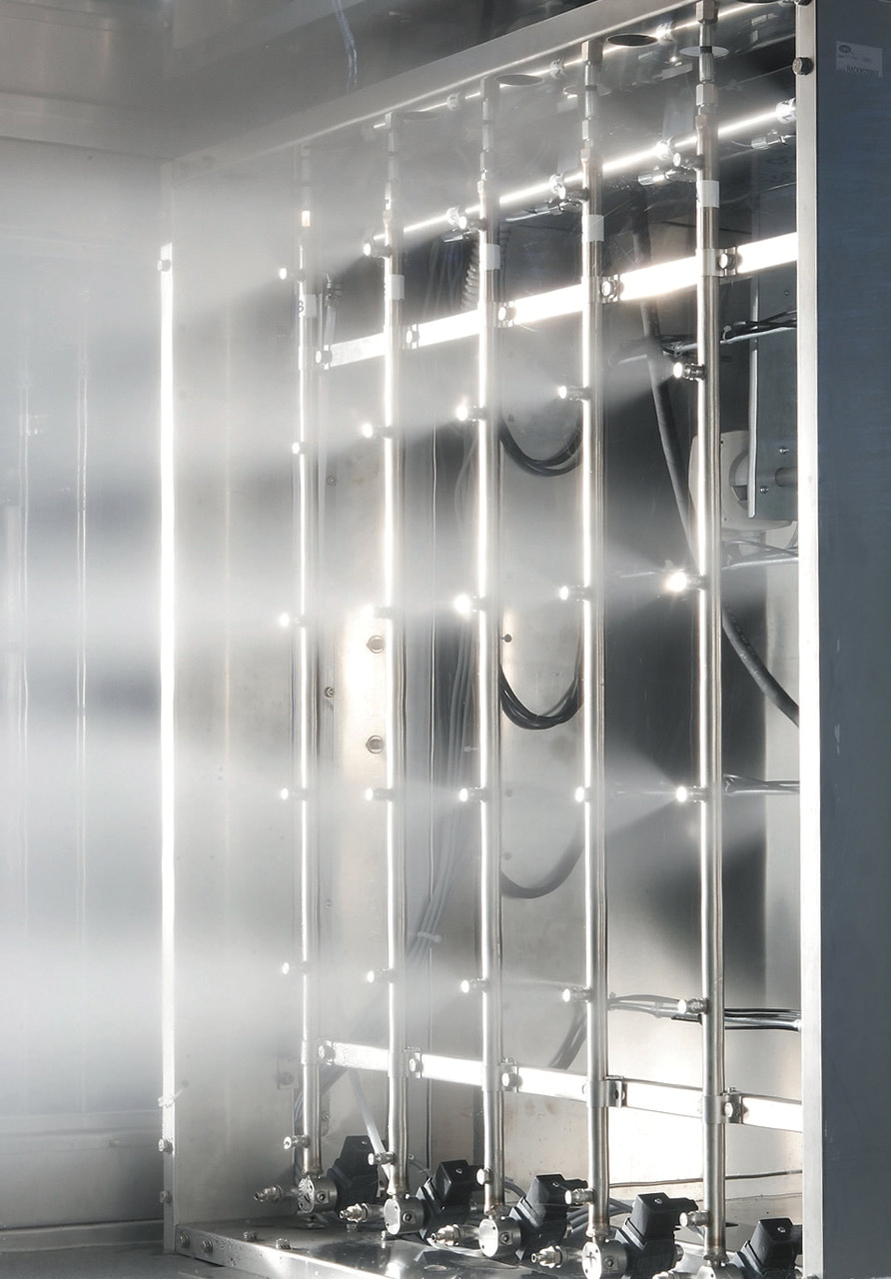 The energy required to evaporate water is dependent on the water temperature. As a body of water increases in temperature, the ‘latent heat of evaporation’ will reduce slightly, as the internal energy of the molecules rises with increased temperature. The latent heat of evaporation is typically taken as 2,450kJ/kg at temperatures used in building environmental applications. This compares with a water specific heat capacity of only 4.18kJ/kgK – the heat needed to increase 1kg of liquid water by 1K. Evaporation reduces the total energy in the remaining water, so potentially cooling it. If the temperature of the adjacent air is higher than that of the water, it will supply heat to the water that will, in turn, maintain or increase the water evaporation rate. The primary driving force is the difference in vapour pressure and it is the availability of heat – from the air or the water itself – that powers the transfer.

The rate of natural evaporation from the water’s still surface into motionless air will be relatively slow. A thin layer above the water will soon become saturated with water vapour, and then further evaporation will rely on that water vapour, adjacent to the surface, diffusing into the larger space. However, if the air is moved – for example, blown with a fan across the surface or the water is agitated or moved – then the rate of evaporation will increase substantially. The actual rates of evaporation are complex to evaluate. There are empirical formulae that have been developed – many associated with the evaporative losses from swimming pools. (For a more technical, in-depth discussion of evaporation rates, see the paper by Mirza Mohammed Shah Methods for Calculation of Evaporation from Swimming Pools and Other Water Surfaces.1)

When water is sprayed into the air by, for example, the atomising spray in Figure 1, the multiple tiny droplets create a large combined area for evaporation and heat flow. The actual relationship of heat and mass transfer is again complex. The paper by Da Silva and others, Building Thermal Performance Simulation with Direct Evaporative Cooling by Water Spray Vaporization2 provides some good background.

Assuming that there is no heat added to the water spray to power the evaporation – apart from that coming from the air and the water itself – then this is known as an ‘adiabatic’ process. The net vaporisation will continue as long as the air has a vapour pressure below that of the water, as shown in the psychrometric chart in Figure 2. As the vapour pressure rises, there will be an increase in the air’s moisture content,
g (kg/kgda) – also known as ‘humidity ratio’ or ‘specific humidity’.

The dry-bulb temperature of the air will reduce – compared with when the spray was initially turned on – as the sensible heat, both from the air and from the spray water, is used to provide energy, as the water molecules vaporise from the droplets. As the air moisture content rises from gA to gB, the dry-bulb temperature falls from θA to θB, so enabling ‘evaporative cooling’. It is unlikely that the air will reach a fully saturated state at X. The effectiveness (or efficiency) of the humidification process is given by the ratio of 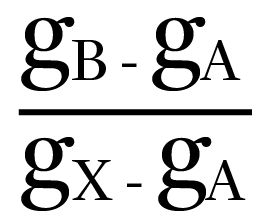 and is affected by the velocity of the air flow, the aerosol size, and the effective wetted area, as well as the air and water temperatures and vapour pressures. 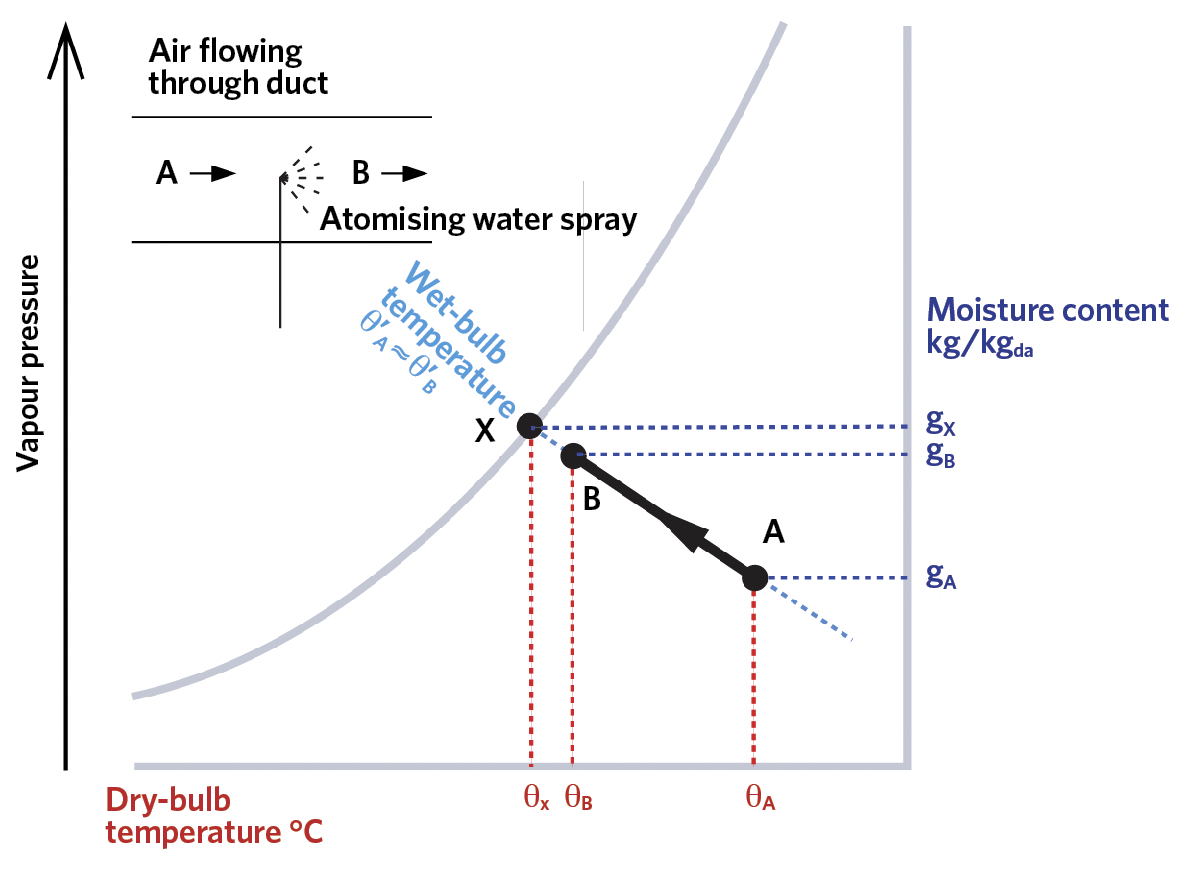 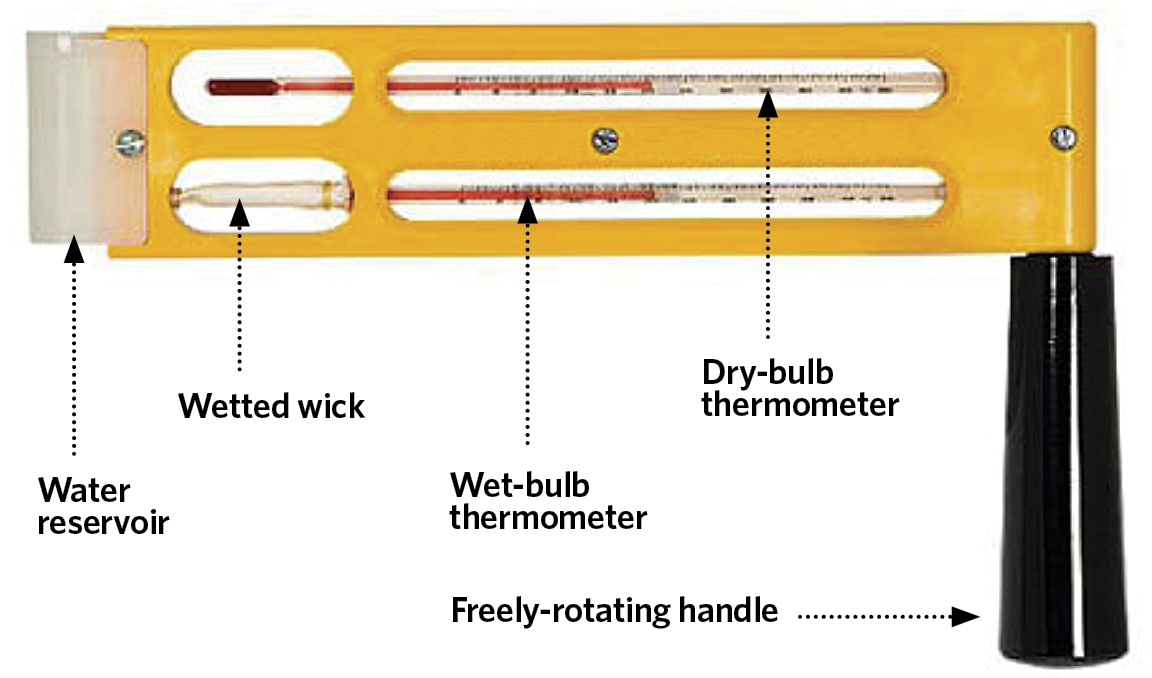 This can significantly reduce the required refrigeration peak capacity used for comfort cooling, as well as cut energy consumption. Any potential energy savings – or reduction in installed plant capacity – will be dependent on location and application. In more arid climates, the opportunity to use evaporative cooling is greater but will, of course, depend on the availability of suitable water. Appropriate modelling and simulation are required to make a total life-cycle assessment of predicted performance, which should include the cost and availability of water. 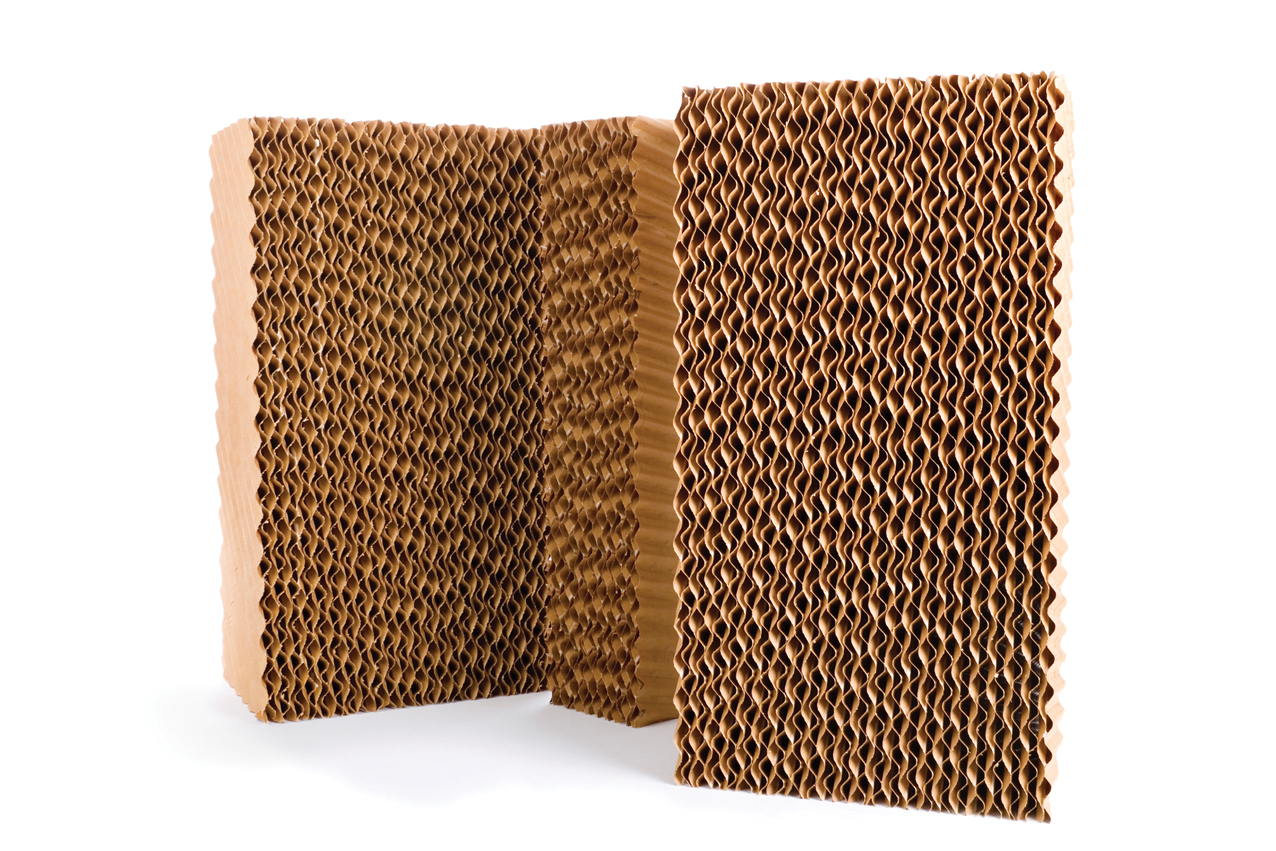 To increase the exposed water surface area, evaporative cooling pads – such as the material shown in Figure 4 – can be used, where water is supplied through a manifold at the top of the pad and allowed to trickle down as air flows through the matrix. A traditional alternative to this was to spray the water over the (inactive) chilled water coils in the air-handling unit. Known as a ‘spray coil’, this process provides an increased wetted surface area compared with using a simple spray. The spray systems available today produce atomised water that can be closely controlled to ensure effective humidification, often without using an extended wetted surface.

It should be noted that the use of any recirculated water – as would have traditionally been the case in a spray coil – must be carefully considered, as doing so can create a significant opportunity for the accumulation of bacteria. The majority of evaporative coolers will use fresh water, so will present a much-reduced risk. Both freshwater and recirculated systems will also ‘wash’ particulate matter from the airstream, adding to the risk of organic matter accumulation. The July 2000 ASHRAE Journal article ‘Operation and maintenance of evaporative coolers’ offers a useful source of suitable operational practice. 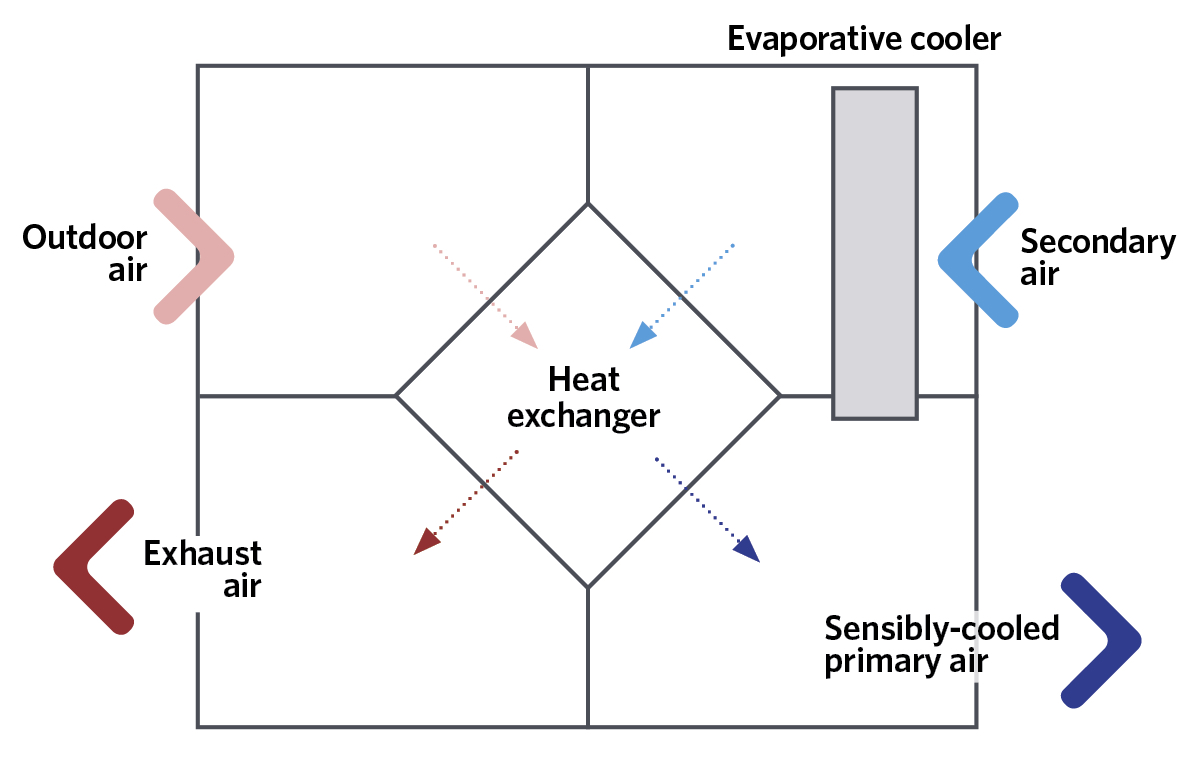 Figure 5: Schematic of a simple example of indirect evaporative cooling

By its very nature, direct evaporative cooling will increase the air moisture content. However, in many cases, this may not be desired.

The increase in moisture content can be mitigated in some applications either by mixing the humidified and cooled air with outdoor air that has bypassed the evaporative cooler – or by simply using recirculated room air. Another increasingly popular method is to use indirect evaporative cooling, as shown in the simplified example in Figure 5. The secondary airstream could be the return air from the conditioned space or outdoor air. The secondary air, which has been evaporatively cooled, will – through the heat exchanger – pre-cool the incoming outdoor air to reduce its dry-bulb temperature, while not directly affecting its moisture content, so also reducing its adiabatic saturation and wet-bulb temperatures. There are various arrangements that are employed to increase the potential cooling effect. For example, direct evaporative cooling could be applied to the already sensibly-cooled primary air to reduce further the dry-bulb temperature while, of course, raising its moisture content.

If evaporative cooling was to be used as the sole means of cooling in a building system, there is likely to be an increased supply air volume flow rate, compared with that when using mechanical refrigeration cooling, as supply temperatures may be higher. Evaporative cooling is often used in conjunction with a conventional refrigeration system, or together with desiccant dehumidification. This combination can provide lower supply air temperatures, as well as being able to cope with room latent cooling loads.