A study published in 2015 by the World Health Organization (WHO) indicated that air pollution costs European economies around US$1.6tn a year in diseases and deaths1, with the economic costs of dirty air totalling more than 10% of gross domestic product (GDP). In absolute economic costs, the top-10 list is dominated by major economies – including the UK.

One of the significant contributing factors is NOx emissions from commercial natural gas boilers. This CPD will consider why there is concern about boiler-emitted NOx and, specifically, how flue gas recirculation can reduce these emissions significantly.

From 26 September 2018, under EU regulation No 814/20133, emissions of nitrogen oxides – expressed in terms of nitrogen dioxide – from water heaters should not exceed 56mg·kWh–¹. 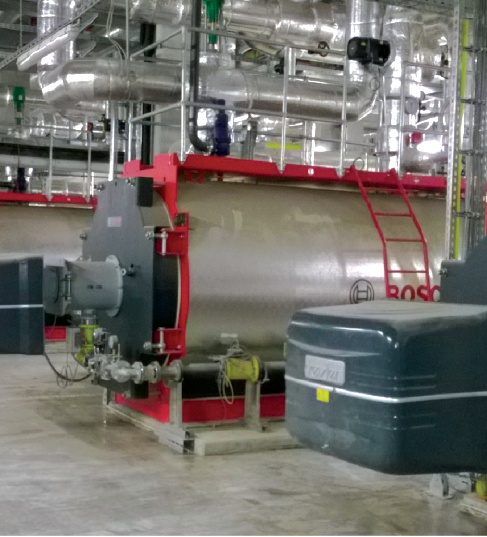 Beyond this, the London Plan – through the Sustainable Design and Construction supplementary planning guidance document4 – places planning requirements on all major developments within Greater London Authority (GLA) control, and calls for gas boilers to have a NOx rating of less than 40mg·kWh–¹ (the same figure required to gain maximum Breeam points for a system that minimises NOx emissions). These are likely to help drive the requirement that boilers should be below 40mg·kWh–¹ in certain areas – although there is still some further review of the final requirements being undertaken by the GLA.

Recently – and after successes in Germany and Denmark – the UK has prepared a consultation document on Clean Air Zones5 for those cities where air-quality problems are most serious. These zones, planned for 2020, are a mechanism to reduce pollution in city centres, particularly by encouraging the replacement of old, polluting vehicles with modern, cleaner vehicles. There is no specific discussion of the impact of NOx emissions from boilers, which seems at  odds with the City of London Air Quality Strategy6 – published last year – that identifies commercial natural gas use as a significant contributor to NOx in the City, as shown in Figure 1. However, there are practical concerns about meeting low NOx-emission targets in the existing energy centres serving district heating schemes that – in line with general UK government policy – have large peak-load boilers, which will be difficult to modify to meet the enhanced air-quality targets.

Converting natural gas and air to heat and pollution

However, there are three primary processes that create NOx during natural gas combustion: thermal NOx; fuel NOx; and prompt NOx. (See box-out for an explanation of the oxides of nitrogen.) 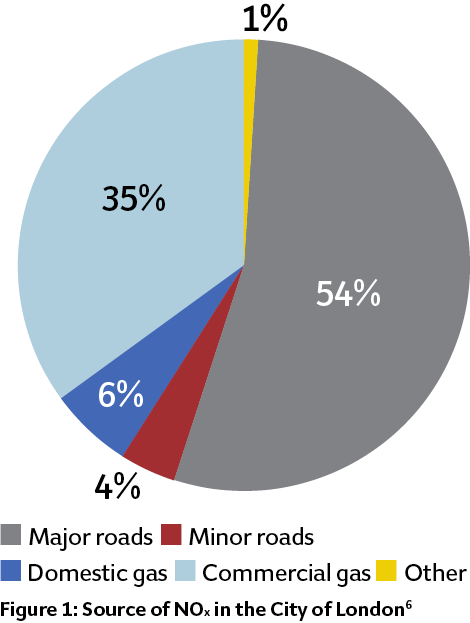 Fuel NOx is formed when the nitrogen in the fuel (as opposed to that in the air) combines with the excess oxygen in the air. This is not a significant issue in natural gas, although it is a problem with oil and coal.

Prompt NOx is formed in the earliest stage of combustion. It is produced from the reaction of atmospheric nitrogen with oxygen radicals in the air – such radicals are created when an oxygen molecule splits into single atoms with unpaired electrons. The levels of prompt NOx are generally very low, so it is usually only of interest for the most exacting emission targets. It becomes more relevant as the other two sources of NOx diminish.

So when natural gas is burned in the presence of air, the resulting cocktail of flue gases include nitric oxide (NO). The NO then reacts with the air to produce NO2. In addition to the reaction to produce nitrogen dioxide, it also reacts with oxygen to form ozone (as well as NO₂).

Ozone is one of the main ingredients of smog, and a health hazard that can cause respiratory problems, as well as damaging plants and other materials. Sunlight will convert NO2 and unburned hydrocarbons in the atmosphere, to produce a photochemical smog. These NOx gases are central to the formation of fine particles (particulate matter, PM) and ground-level ozone, both of which are associated with adverse health effects. Rain can remove NO₂ from the atmosphere. However, NO₂ decomposes with water to produce nitrous acid (HNO₂) and nitric acid (HNO₃) – both of which are corrosive.

The levels of excess air, the temperature of that air, and the way that the air is mixed with the gas will affect the production of NOx. At higher air pre-heat temperatures, the NOx levels will increase, the air being typically pre-heated by exhaust gas/air heat exchangers or more compact recuperative burners. Pre-heating air will significantly increase the combustion efficiencies and reduce carbon emissions, but will increase NOx emissions. 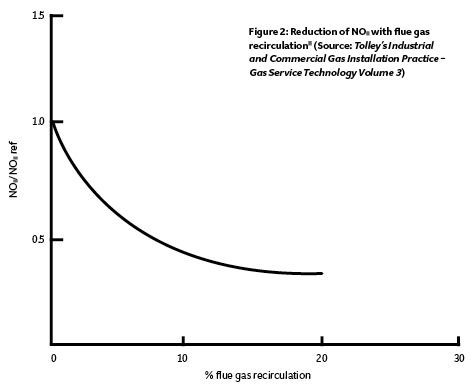 For large boilers (1MW and above), typical NOx levels are currently likely to be above 70 mg·kWh–¹ – although it is difficult to be specific because there are many combinations of boiler and burner, with the actual levels being influenced by combustion chamber, burner head and flame type, and geometry.

The flame temperature may be reduced – and so lessen NOx production – by adding non-reactive gases such as carbon dioxide, nitrogen, steam or any other inert gas into the burner. A perfect source for such a gas is in the flue gases that – having left the combustion chamber – will be inert and have a temperature substantially lower than the flame temperature. By adding about 10% of flue gas into the flame, the temperature will be reduced by about 7%. This is known as flue gas recirculation (FGR). Although it might be considered that reheating the hot flue gases may exacerbate the production of NOx, the relatively cool (compared with the combustion chamber) inert gas lowers the temperature of the flame, so reducing the production of NOx.

In a standard forced-draught burner, excess oxygen is present to ensure complete combustion whereas, with FGR, the excess oxygen is reduced and partly replaced by inert flue gases – which mixes and absorbs some of the flame energy – so reducing the temperature. NOx formation increases exponentially as temperatures rise, so reducing the flame temperature can readily cut NOx levels by up to 50%, as indicated in Figure 2. At higher rates of flue gas recirculation, the flame size can increase, which may cause impingement on heat transfer surfaces, so requiring a limitation on firing rate. The consequent reduction of the oxygen content limits the possibility of nitrogen reacting at later stages within the flame. 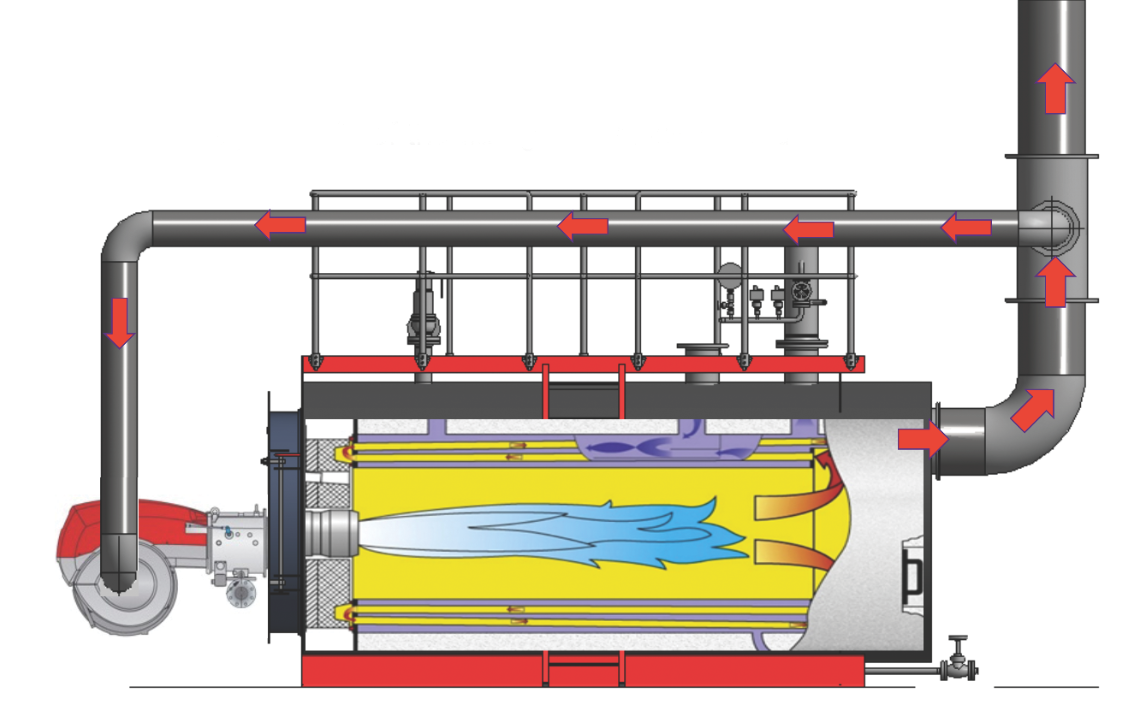 Practically, the FGR ducting (shown in Figure 3) connects between a special port on the burner air intake (shown in Figure 4) and a branch in the flue close to the boiler outlet – and, potentially, a fan – with the flow of flue gas being modulated by a damper. The duct is insulated to reduce condensate formation, and includes condensate drainage points in the duct adjacent to the burner inlet.

When multiple boilers are used, each would have its own FGR assembly. Electronic combustion management systems ensure the correct amount of flue gas recirculation into the burner, with typically up to 10% of the flue gases being recirculated. Other than this, the requirements are the same as for a standard forced-draught burner, and the main flue carries the same mass flow rate.

This may have a slightly negative impact on energy efficiency, because of reduced heat transfer as a result of lower flame temperatures and a small reduction in thermal efficiency. Generally, the boilers are slightly down-rated to enable more favourable mixing in the combustion chamber.

The recirculated flue gases are normally drawn into the burner by the burner fan but, for larger appliances, there might be an additional fan. The burner damper is progressively opened as the burner modulates up. The damper itself is set during the burner commissioning process, and so is another parameter for the commissioning engineer to adjust, in addition to fuel and air. As discussed earlier, NOx and CO vary inversely, with CO levels increasing as NOx levels reduce. So it is important that the system is properly set to operate most effectively.

In terms of capital cost, the burners are more expensive, as they are specifically produced for the application. The ducted flue system and flue connections are relatively simple. According to advice from the manufacturer, typical additional cost – compared with that of a standard installation using FGR – is around 20% to 25% extra to the burner and flue costs, not to the overall project cost. The cost per kW reduces as the size of boiler increases. 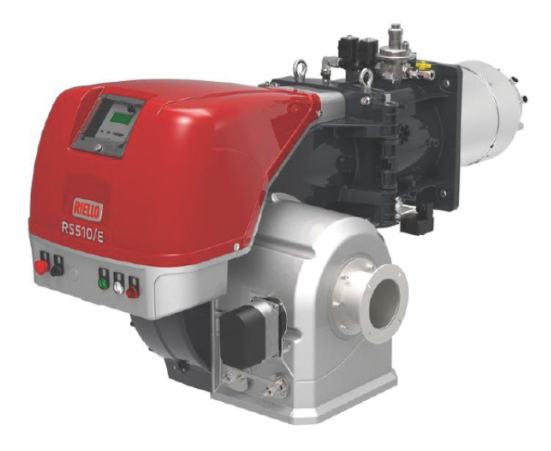 There is little additional maintenance when using FGR, particularly as – with clean fuels, such as natural gas – there is minimal additional build-up on the burner fan. The main focus is to ensure that there is appropriate condensation removal and correct damper operation.

There are many ways of reducing NOx emissions in the flue gases of natural gas boilers – see Nitrogen Oxides (NOx), Why and How They Are Controlled, US Environmental Protection Agency, 1999, for an excellent overview of all the technologies. However, for boilers between 500kW and 32MW, the basic FGR technique can provide a practical and cost-effective solution. Simplicity is one of its greatest advantages, particularly over one of the main competing technologies, selective catalytic reduction (SCR) that – although more adaptable – requires more space and significantly more maintenance.

The shades of NOx

NOx is the collective term for oxides of nitrogen.

Nitric oxide (NO), also known as nitrogen oxide and nitrogen monoxide, is a clear gas formed from nitrogen and oxygen at high temperatures. NO is the signalling factor that controls the body’s vascular tone, and levels of inflammation, coagulation and oxidation. It is not considered to be hazardous to health at typical ambient levels. However, it is a toxic gas at high concentrations (safe dose to be less than 80 ppm) and extended exposure will cause difficulty in breathing, and could be fatal. It reacts rapidly with oxygen to form nitrogen dioxide, NO₂.

Nitrogen dioxide (NO₂) is a reddish-brown, highly reactive gas that has a strong odour, is a powerful oxidizing agent and is a major air pollutant. It is toxic, with 1.5ppm reported2 as causing problems because – when combined with water (present naturally in the lungs) – it forms nitric acid. This is a potent irritant that can cause pulmonary oedema (fluid in the lungs) leading to death, possibly with a time delay. At 20°C, 1ppm NO₂ = 1,910 µg•m-³ NO₂.

Nitrous oxide (N₂O), also known as ‘laughing gas’, is a major greenhouse gas and air pollutant, but not a significant product of natural gas combustion.