The long-term (EU-driven) UK goal is to achieve a reduction in greenhouse gas emissions of 80-95% by 2050, compared with 1990 levels – as defined by the Energy Roadmap 2050.1 The popular expectation is that the ‘decarbonised grid’ will supply the energy source to heat and power buildings with a substantially reduced environmental impact. However, the UK and the wider EU are still many years away from reaching this ambitious target.

Pragmatically, systems that are being engineered today to produce energy for buildings over the next 20 to 30 years must maximise the use of dwindling sources of fossil fuels to provide reliable and efficient heat and electrical power, while – importantly – minimising the environmental impact, as well as ensuring value for money.

This CPD will consider the application of natural gas-fired combined heat and power (CHP) as a means of delivering part of this low carbon solution.

It is the EU Energy Efficiency Directive (EED)2 that set national energy saving expectations – as well as ambitious levels for building refurbishment, and so links into the provisions of the Energy Performance of Buildings Directive (EPBD). The EED is the directive that determines energy consumption targets subsequently set by the UK and other EU member states.

The EED set in motion the building-related legislation that is attempting to improve the performance of buildings, including: building energy auditing; guidelines and performance certification; accreditation schemes for auditors and providers of energy services, managers and installers; creating incentives and funding mechanisms for building operators; metering and billing improvements; promotion of the energy services market; and the imperative that the public sector should purchase energy efficient products, services and buildings. 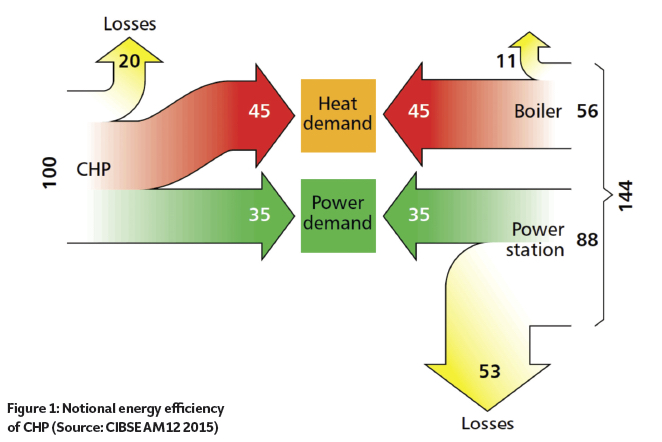 The recent launch of the EU Strategy on Heating and Cooling3 highlighted that almost half of the EU’s buildings still have individual boilers that were installed before 1992, with efficiency of 60% or less.

In 20144, the European Commission assessed the progress of EU member states towards the 2020 target of 20% energy savings. Although the headline was encouraging – with estimates that the EU will achieve energy savings of around 18-19% by then – it was noted that about a third of the progress towards the 2020 target was likely to be caused by lower than expected growth resulting from the global financial downturn. It proclaimed starkly that there should be no complacency about reaching the 20% target, and that the efforts required to achieve targets for the period after 2020 should not be underestimated.

CHP is recognised by the recent EU Strategy on Heating and Cooling as capable of delivering significant energy and CO2 savings compared with separate generation of heat and power – saving money, while also ensuring a stable and reliable heat and electricity supply.

The EED provisions (under article 14) explicitly require that each member state should have undertaken an assessment of the potential for high-efficiency cogeneration (combined heat and power) by 2015. The UK’s report, required under EED article 14, was published in December 2015 – the National Comprehensive Assessment of the Potential for Combined Heat and Power and District Heating and Cooling in the UK.5 It concluded that to achieve the energy goals, significant investments need to be made in new low carbon technologies, renewable energy, energy efficiency and grid infrastructure.

More than 70% of heating in the UK is supplied by conventional oil and gas boilers.5 CHP in commercial buildings is likely to require more capital expense, and would normally operate alongside other boiler plant, generating heat to produce hot water for space heating or potable hot water. Combining the CHP with some form of thermal storage will increase the efficiency of CHP, as excess heat production can be stored while electricity is being generated.

Ideally, the majority of the annual heat demand would be generated by the CHP plant, while the additional boilers would be used to meet peak demand, and for periods when the CHP unit is not operating. CHP units may, on a relatively small scale, supply single buildings or, on a larger scale, supply a number of buildings in a development or through a community heating system. The most commonly used fuel is natural gas, which can be used in spark-ignition gas engines, micro-turbines, or gas turbines in open-cycle or combined-cycle systems.6 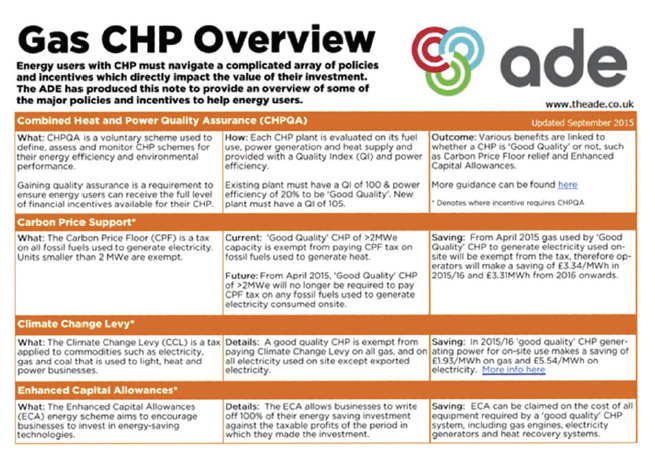 When comparing the effectiveness of CHP with using grid-supplied electricity and local heating – for example, gas, oil or electricity – it is practically impossible to predict a definitive performance because of the temporal variations in the production and distribution of primary energy (for example, gas and oil), as well as the generation and distribution of electricity. However, comparisons are made – such as that illustrated in CIBSE’s authoritative AM127, as shown in Figure 1. This scenario indicates that the primary energy requirement to produce similar amounts of electricity and heat for the end user will consume more primary energy using grid-supplied electricity, plus a local gas-fired boiler (as shown on the right of the diagram) than by using CHP. If there is a simultaneous demand for both heat and power, CHP can consistently deliver energy and carbon savings of around 30%, by reducing the energy lost as waste heat, compared with separate power and heat generation from the same fuel.

The UK’s CHP Quality Assurance programme (CHPQA)8 offers a standardised method of assessing the performance of CHP schemes and, although voluntary, the CHPQA certificate gives evidence of a ‘quality index’ that is a prerequisite to several governmental financial benefits that may be payable to the CHP operator. This can include Renewable Obligation Certificates, Renewable Heat Incentive, Carbon Price Floor (heat) relief, Enhanced Capital Allowances and preferential business rates.

The only commercial CHP technology supported by the UK’s Feed-in Tariff scheme (FiTs) is that fuelled by gas derived from anaerobic digestion. Appropriately installed and operated, domestic micro-CHP with an installed capacity of 2kWe or less may also benefit from FiTs.

It is somewhat complicated to determine the actual benefits that may apply to a particular CHP installation (and the associated legislative responsibilities). The Association for Decentralised Energy has some very informative factsheets that offer an overview of some of the major policies and incentives affecting gas, renewable and micro-CHP.

The CHPQA certification assures ‘good-quality CHP’ – an energy-efficient technology that uses less fuel in total than the alternative methods of separately generating heat by conventional boilers and electricity in conventional thermal power stations.

For small-scale CHP that produces less that 1MWe – such as would be applied in buildings and village-size developments – the CHP needs to perform at least as well as the EU-harmonised efficiency reference values for separate production of electricity and heat. These harmonised values are used to set the benchmark for the CHPQA performance index. They were slightly updated9 by the EU recently, and the CHPQA requirements will be modified accordingly.

The 2013 Non-Domestic Building Services Compliance Guide, which includes supporting information for the England Building Regulations, requires that CHP systems must have a minimum CHPQA quality index of 105, and power efficiency greater than 20%. The CHP must operate as the lead heat generator, and metering is required to measure hours run, electricity generated and fuel supplied to the CHP unit.

For compliance, the CHP plant should be normally sized so that it supplies at least 45% of the annual total heating demand – that is, space heating, domestic hot water heating and process heating. When applied to community heating systems, CHP may be used as a main or supplementary heat source. The compliance guide details a procedure to determine the carbon dioxide emission rate for a new building so that it can be used to show compliance with the Building Regulations.

An example of CHP application

UK local authority planning requirements demand buildings have a proportion of their energy derived from some form of renewable or low carbon technology. Manufacturers are able to offer support not only in supplying products such as solar thermal solutions, heat pumps and CHP units, but also in integrating the equipment with more traditional condensing boilers and direct-fired water heaters. 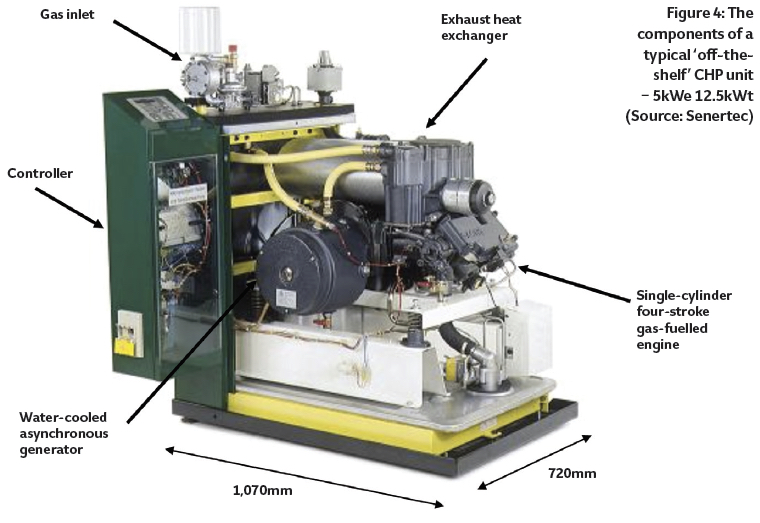 An application that has been applied in both the UK and Europe is combining CHP with direct gas-fired water heaters, as illustrated in Figure 2. The indirect calorifier is the heat interface between the CHP and the secondary direct-fired water heaters. The calorifier should be large enough to store the CHP heat output during times of low water demand, and it must be able to guarantee full flow of domestic hot water at peak demand.

At the core of the CHP appliance is either an internal combustion engine or gas turbine. The CHP units are heat-led devices, so the thermal output should be selected to match the base heating load of the building, system or process to maximise the annual running period (typically 5,000 to 6,000 hours) and so the economic and environmental benefits. The base electrical load should be carefully considered to minimise exporting electricity to the grid as, in the UK, there is currently little – or no – financial incentive in doing so.

Systems, driven by ‘prime movers’ – as in the example in Figure 4 and, more generically, in Figure 5 – will reduce the building’s consumption of grid-supplied electricity and displace boiler fuel. This particular unit produces an electrical output of around 5kWe and heat output of 12.5kWt and, if operating for around 5,000 hours a year, would reduce annual carbon dioxide emissions by approximately 5,000kg – as well as reducing operating costs.

Typically, the CHP is sized to meet the base load of the building system so that the unit is running as much as possible, and in many applications this base load will be the building’s domestic hot water requirement. 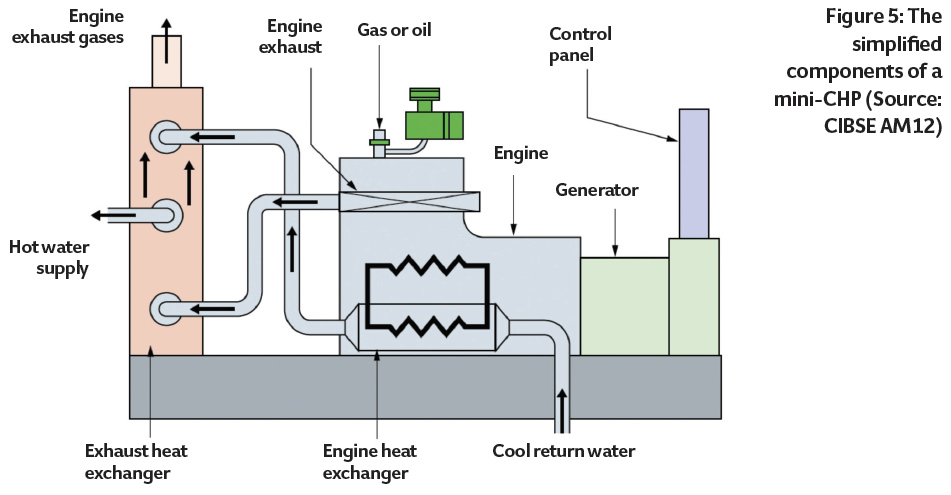 Long-term decarbonisation of the electricity grid will mean that, over time, CHP systems will save less CO2, as they will be competing with lower carbon grid electricity. However, natural gas-fired CHP with efficiencies greater than 20% electricity and 60% thermal will still result in CO2 savings, as long as unabated gas-fired power stations are still operating on the system.7

It is possible that the gas supply will also be decarbonised through the injection of biomethane, which may offset some of the reductions in CO2 savings. CHP would make better use of this renewable energy. 7

In the longer term, beyond 2030, it may be necessary to move away from the small-scale natural gas-fired plant to the use of renewable fuels or extraction of heat from major power stations, together with the greater use of district heating.8

However, in the foreseeable future, correctly applied CHP can deliver systems that produce less operational CO2 and reduce energy costs compared with buildings that are powered by grid-supplied electricity and heated by natural-gas condensing boilers.