Unlike vapour compression chillers, absorption chillers use heat as the power source to cool water. Absorption cooling technology can be very useful for exploiting waste heat that would otherwise be dissipated to the atmosphere. The technology is not new – the first applications were in the 19th century – although significant commercial products were developed from the late 1950s. In the intervening years, products were improved and efficiency increased.

This CPD article presents the latest efficiency improvements and some of the possible applications.

How an absorption chiller works

The principal difference between the absorption and the compression cycles is that the former is a chemical cycle and the latter mechanical.

The simplified absorption cycle is shown in Figure 1. In the absorber, the refrigerant vapour is dissolved into the liquid (the absorbent) to form a solution. The solution is composed of a salt – typically lithium bromide (LiBr), which has a great affinity with water – with water acting as the refrigerant. 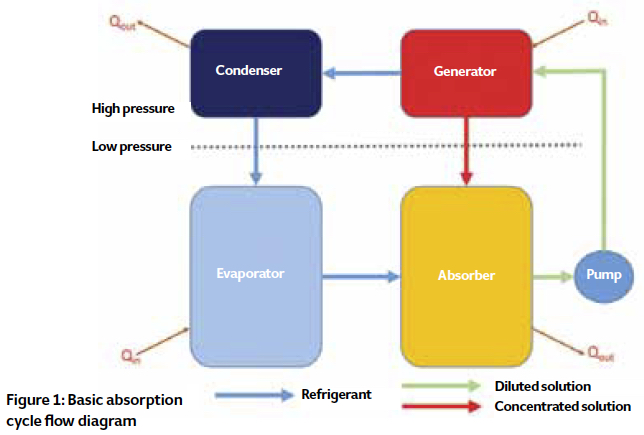 After the refrigerant vapour is absorbed in the solution, the liquid is pumped to a higher-pressure section of the chiller (the generator), where heat – typically from a waste heat source – evaporates the refrigerant (water) vapour out of the solution. This vapour enters the condenser, where cooling water – for example, from a cooling tower – condenses the water ready to pass into the low-pressure evaporator through a throttling device. The evaporator – which is of a shell-and-tube construction – operates nearly at a vacuum condition (in the shell) with a pressure of approximately 0.86 kPa.

The heat balance of the flow chart shown in Figure 1 can be expressed as: 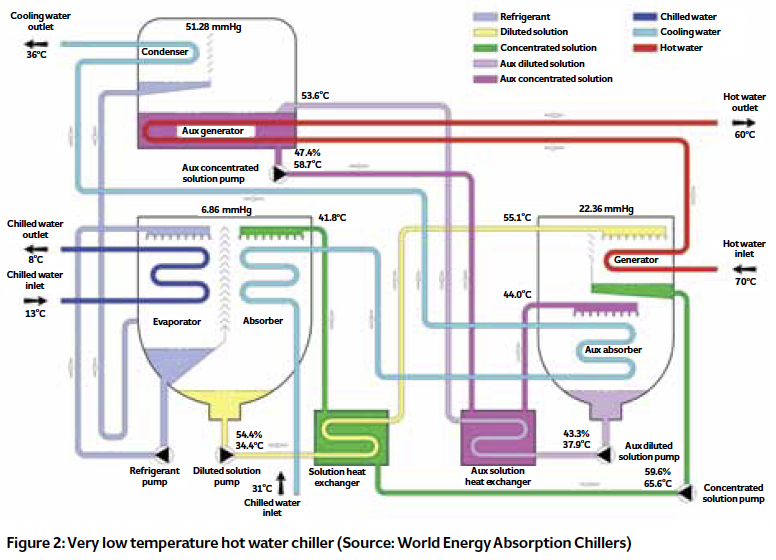 There are two types of absorption chillers commonly available. Single-stage chillers – as discussed so far – need heat with a minimum temperature of 80°C. Double-stage absorption chillers are more efficient, but need a higher-grade heat, generally above 140°C. The sources of heat can be various; for example:

However, there are evolved absorption cooling technologies that can use low-grade heat, requiring only 70°C hot water to produce cold, as shown in the example in Figure 2.

The efficiency of absorption chillers is defined by the coefficient of performance (COP), where COP = Qc/Qh, where Qc = cooling capacity and Qh = heat input. So, for example, if a system was to use a thermal oil to transfer heat from an engine’s exhaust gas to provide the heat input for an absorption chiller delivering a flow of chilled water, the values of Qc or Qh could be evaluated from (m·Δ θ·Cp)

Typically, the COP for commercial absorption chillers are 0.65-0.84 (single stage) and 1.00-1.50 (double stage). The achieved COP can be affected by a number of parameters, as indicated in Table 1. The COP of absorption chillers remains practically constant down to about 50% of the design cooling load and reduces as load drops
below that.

Manufacturers have been improving the efficiency of chillers – in particular, for those using low temperature heat sources such as hot water. The current highest COP for a single-stage absorption chiller is about 0.84. Incremental increases have been achieved (as shown in Figure 3) as a result of:

As well as improving efficiencies, this reduces both the required size of the unit and the quantity of LiBr solution.

LiBr absorption chillers need cooling water to reject the cycle heat, the water being cooled with equipment such as cooling towers, dry or adiabatic coolers. Alternatively, any other available coolant process can be employed, such as sea, river, lake or underground water, or via water heat transfer to swimming pools or the ground in geothermal systems. The minimum cooling water temperature for the absorption chiller is 20°C to avoid solution crystallisation. 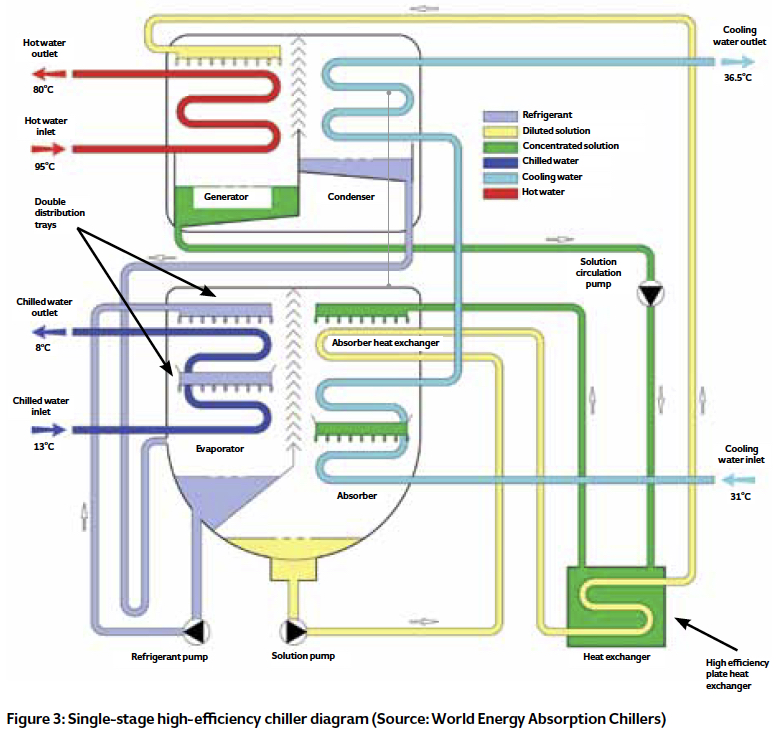 The heat rejected is based simply on
Qcool = Qc + Qh where Qcool = thermal power needed for the chiller’s cooling (heat rejection), Qc is the cooling load, and Qh = heat input. If the cooling water can be used for heating (for example, in swimming pools or domestic hot water pre-heating), the use of the waste heat would be maximised.

The goal of using absorption chillers is to convert as much heat as possible into cooling energy. Many waste-heat absorption chillers receive the heat from combined heat and power (CHP) plants. Most are powered by reciprocating engines and combustion turbines that convert the energy of a fossil fuel – generally, natural gas – into electricity. Being combustion machines, these reject heat that can be recovered.

Combustion turbines have only one source of heat: high-temperature exhaust gases, as shown in Figure 5. The heat is recovered as steam, thermal oil or superheated water. Alternatively, the exhaust gases can be used directly; as it’s high-grade heat, double-stage absorption chillers can be used.

Use of chiller cooling water

For this purpose, high hot water Δθ absorption chillers were developed to obtain a very high difference between the entering and leaving hot water temperatures from the chiller. A high hot water Δθ helps the district heating network reduce the hot water flow rate and, consequently, the pressure drop of the network. This will reduce costs, not only because the pipes would be smaller, but also because of reduced circulation pump power consumption. Additionally, by having an outlet hot water temperature as low as 50°C the thermal distribution losses are reduced as the district heating water circulates back to the central plant. 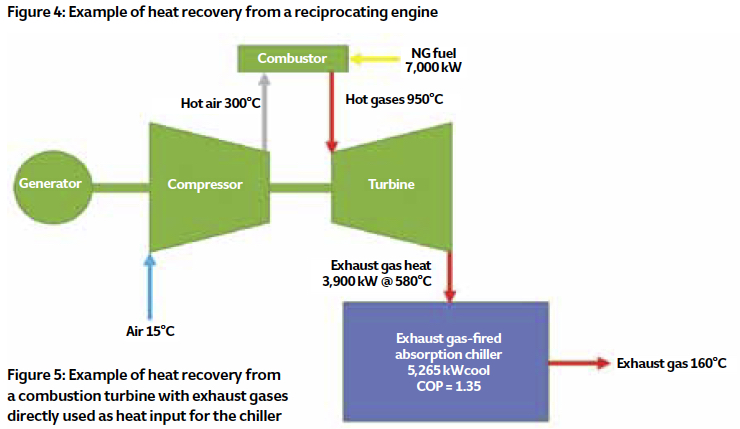 Absorption chillers can be applied at any site that has waste heat and needs cooling. This can include:

The resulting chilled water may be used not only in applications of air conditioning and environmental control, but also in industrial process cooling and for increasing the efficiency of combustion turbines, by cooling the turbines’ intake air to the compressor. The overall advantages of applying LiBr absorption cooling technologies include the following: