Selection and sizing of systems to deliver potable water in buildings is often focused on the central source of heat – which is, of course, important for ensuring that the system is energy efficient and environmentally responsible. However, every such system will include potentially extensive pipework that must meet new – as well as recently updated – standards. This article will consider the key driver of these updates, the practical system application, and how the very factors that provide a healthy and safe system can influence longevity of the installed systems – particularly those that are made of thermoplastic.

In the UK, the principal standard setting the requirements for potable hot water supply systems in buildings – often referred to as domestic hot water service (DHWS) or secondary hot water – is BS EN 8558 Guide to the design, installation, testing and maintenance of services supplying water for domestic use within buildings and their curtilages. This is explicitly complementary guidance to BS EN 806. With the very recent update of BS 8558, these two standards have now fully replaced the long-standing – and now withdrawn – BS 6700.

The September 2015 release of BS 8558 incorporates changes that mainly relate to the control of the risk posed from legionella in water supply, and to provide appropriate continuity between the parts of BS EN 806 so that the provisions of the relegated BS 6700 are properly supplanted.

The earlier edition of BS 8558 was lacking the informative annex with pipe-sizing calculations that originally appeared in BS 6700 – an omission that has now been rectified.

The technical requirements for DHWS are explicitly covered by the five parts of BS EN 806 Specification for installations inside buildings conveying water for human consumption – general; design; pipe sizing; installation; and operation and maintenance.

Legionnaires’ disease is a type of pneumonia caused by a bacterium called legionella pneumophila (Figure 1). Legionella is not transmitted from person to person, but is acquired by the inhalation of the bacteria, typically in a contaminated aerosol. Legionella bacteria are destroyed swiftly at temperatures above 70°C.

However, between 20°C and 46°C – as found in many HVAC water sub-systems – legionella growth is abundant, with the optimum temperature around 37°C. At 20°C, there is little growth in bacteria and, at 60°C, it has been shown that 90% of the legionella pneumophila are killed in just two minutes – compared with several hours at around 50°C. At low temperatures, legionella becomes dormant, but it is ready to multiply when the opportunity presents itself.

Biofilms are created through a combination of nutrients, scale and corrosion at appropriate temperatures, and provide an ideal breeding ground for legionella.

The underlying need to produce systems that are resistant to the multiplication and distribution of legionella has been discussed in previous CIBSE CPD articles, including the July 2012 module – which provides some detail on the sources and prevention of Legionnaires’ disease – and the April 2014 CPD, which further considers the updated HSE L8, as well as its application.

However, as is reiterated in BS 8558, there are several statutory instruments in the UK that, although generally consistent with the standards, may alter some of the detailed requirements. The Water Regulations Advisory Scheme (WRAS) website provides a useful summary of, and links to, the principal regulations and byelaws that control this area.

The practical aspects that determine the requirements for DHWS pipework design are described in BS EN 806:2006 Part 3, and have been abstracted here. However, if undertaking design, it is important to refer to the primary source.

Perfectly hygienic potable water contains bacteria and the nutrients that fuel
legionella (and other microorganism) growth, and biofilms develop in all systems irrespective of the material used. In order to reduce risks, there are several factors that should be avoided:

In most commercial systems, this will require a recirculation loop – providing a flow back to the heating source – that should be designed to give a returning temperature of at least 50°C (55°C in healthcare premises); there should be temperature measurement points so that this may be monitored.

If it is not practical to use pipework to recirculate hot water back to the heating source – typically, a hot water calorifier/storage tank or a tankless/instantaneous water heater – or where the minimum return temperature cannot be guaranteed, a single-pipe system with electrical self-regulating trace-heating cables may be used. Trace heating could also be seen as a solution if there was likely to be an unreasonable length of time to draw off water before it became useably hot.

Chlorine dioxide (ClO2) is an oxidising biocide capable of reacting with a wide range of organic substances, including many of the constituents of bacterial cells. Chlorine dioxide does not hydrolyse when it enters water; it remains a dissolved gas in solution. Chlorine dioxide is approximately 10 times more soluble in water than chlorine.

The relatively low levels of chlorine dioxide used in drinking water are able  to inactivate bacteria because of oxidation disrupting a number of different cell processes.

DHWS deadlegs should not exceed a volume of 0.5 litres – so, for example, a 20mm cross-linked polyethylene (PEX-c) pipe (internal 15.5mm) would have a maximum allowable deadleg length of 2.6m. This requirement is driven by the need to reduce legionella bacteria, but also reduces the risk of stagnation, ensuring better water quality.

If it can reasonably be foreseen that sections of the distribution circuits will be used less often than those connected pipe runs – for example, those serving kitchens or showers – check valves (non-return valves) should be fitted to prevent backflow from the less-used branches. This will reduce the risk of relatively stagnant water contributing to biofilm colonisation of the other outlets. When equipment or outlets are permanently removed, the branch pipework should preferably be removed rather than simply being capped off, so leaving an unwanted deadleg.

Circulating pump design, the correct commissioning of balancing valves, and positioning of non-return valves are key issues to ensure flow throughout all parts of the hot water system – particularly the hot water return legs – to avoid long lengths of stagnant pipework.

BS EN 806 recommends that standby pumps should not be used, as non-operating pumps create stagnant pockets of water that pose a legionella risk. Another oft-used pipework system component – the automatic air vent – should not be used, as it creates a stagnant store of water. Good pipework design, and properly installed and supported pipes, can be used to ensure that any air is rejected as the water flows from the outlets and does not obstruct the return flow

Continuously operated recirculating systems provide fewer opportunities for bacteria reproduction, by reducing stagnation risk, as well as maintaining the temperature of the water. And, of course, the original objective of using a return loop in DHWS was to provide hot water swiftly when the outlet was opened, so reducing water wastage – as well as delivering a more acceptable service.

To reduce corrosion of, or prevent excessive scale formation in, system pipework and components, materials used in the piping systems must be compatible with the physical and chemical characteristics of water supplied to the building. Domestic water systems must not use materials that support microbial growth, such as those containing natural rubber, hemp, linseed oil-based jointing compounds and fibre washers. Similarly, any synthetic materials used should not adversely affect water quality by supporting microbial growth. However, studies in Europe that compared plastic with copper pipes have concluded that the development of legionella does not vary between the two materials.

Even systems that are well designed are likely to require disinfection at some point (as well as flushing through with potable water). This may be, for example, at the initial commissioning of the systems; as part of a regular maintenance regime; after works on the system; or after an ‘incident’ or evidence of contamination. It could simply be when the system has not been used for a long period – this may be as little as two or three weeks, but the period will depend on the ambient temperature, condition of the water system, potential for exposure to aerosols, and the susceptibility of users.2

There are two main approaches to disinfecting continuously operated recirculating systems. These both present a health and safety risk, and appropriate checks and records of activity, and the state of the system, should be kept for all of the work. These are described in detail in the 2015 publication PD 855468 Guide to the flushing and disinfection of services supplying water for domestic use within buildings and their curtilages.

Thermal disinfection of hot water services can be carried out by raising the temperature of the whole contents of the circulating water to 60°C (or above) for at least an hour. Every hot water outlet throughout the system must then be flushed and allowed to flow for five minutes at full temperature.

Chemical disinfection of a water system is normally based on chlorine dioxide (see boxout) being dosed at 50mg/L for a minimum contact period of one hour, at the end of which the concentration should not be less than 30mg/L free residual chlorine (mg/L ≈ ppm). The normal maximum level in potable water is just under 1 mg/L.

However, lower concentrations and longer contact times are considered acceptable, as set out in PD 855468. After disinfection, and before the system is brought back into use, the disinfectant should be thoroughly flushed from the system. 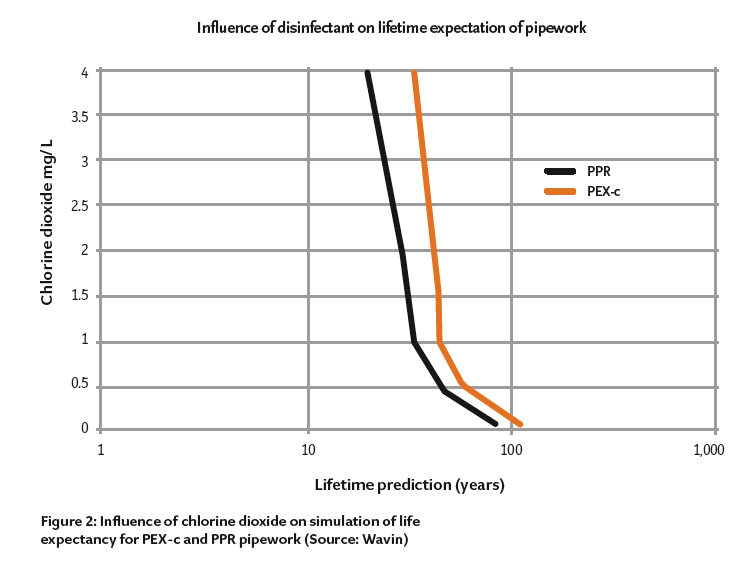 Even in the best-designed and operated hot water system, sediment will accumulate because of the continuous replenishment of the water with oxygenated mains water that contains dissolved solids as well as suspended particulates. These will support the growth of legionella (and other microorganisms), as well as reduce the effectiveness of the system, and should be removed on a regular basis. This can be undertaken by continuous methods of sediment removal – for example, by filters, strainers or separators, or by manual flushing and cleaning (particularly of heating devices).

Effect of operational parameters on lifetime expectancy of non-metal pipework

Two thermoplastic materials that are applied in UK recirculating hot water pipework systems are multilayer cross-linked polyethylene (PEX-c) and polypropylene (PPR). Solid wall PEX-c and polybutylene pipework are not suitable for recirculating systems, as there is potential for accumulation of leached chemicals from the pipe surface.

The chlorine content in the water and the temperature will significantly affect the lifetime of such a piping system.

Using a manufacturer’s modelling tool3 for an example application, the predicted life of PEX-c and PPR have been determined at different water chlorine dioxide levels, as shown in Figure 2. The life expectancy for this system, using 0.5ppm of chlorine dioxide, is 66 years for the PEX-c pipework, and 23 years for the PPR.

At 1ppm of chlorine dioxide, the life expectancy falls to 46 years for PEX-c and 16 years for PPR. Therefore, in this case, a doubling in chlorine dioxide results in a 30% reduction in useful life, indicating that appropriate chemical dosing of the water is important not only for human health, but also for system longevity.

Thanks to Gabrielle Fletcher, at Wavin, for modelling the performance of the pipework.