Measured building performance in new non-domestic buildings often reveals a significant gap between the energy usage predicted at the design stage and the actual energy consumption, often with consumption many times higher than predicted, according to assessments of real building performance by CarbonBuzz.1 This performance gap also applies to refurbishment projects, where heating equipment frequently fails to achieve the headline efficiencies quoted by manufacturers.

This CPD will consider the application of gas absorption heat pumps (GAHP) as the lead heating source in ‘bivalent’ heating and hot water systems.

Renewable technologies are increasingly specified as the lead source of energy – often supported by gas-fired condensing boilers – for heating and hot water provision on new developments to meet the low carbon requirements of UK building regulations, and to help towards renewable energy generation targets. In refurbishment projects, ‘low or zero carbon’ (LZC) technologies, such as heat pumps, are increasingly specified alongside replacement condensing boilers to maximise the opportunity for low-carbon operation and potential operational savings.

In new and refurbishment projects, these ‘bivalent’ systems – so called because they have two heat sources – can often fail to deliver the predicted energy and carbon savings. This can be due to poor design of the systems and failure to consider its operation as a whole, plus the specific control requirements. This can result in the two technologies competing against each other – producing unexpectedly high operating costs when the lower-carbon technology fails to perform as expected.

Modern condensing boilers are typically 105% (net) efficient,2 and achieving a significantly higher efficiency (towards a potential maximum of 111%) in future developments is likely to be prohibitively expensive. By way of comparison, currently available gas-fired absorption heat pumps can provide efficiencies of up to 165%. Used as the main ‘boiler’ (in a cascade arrangement with condensing boilers), the GAHP may operate for long periods of time – so its high efficiency results in significant gas savings, with carbon emissions reduced proportionately. 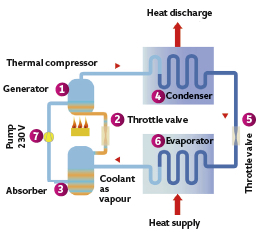 The absorption process works by applying a pair of chemicals that have a strong affinity to dissolve in one another. In GAHP, this is normally a mix of ammonia and water, with the ammonia acting as a refrigerant (known as the ‘solvent’) being absorbed and transported through the ‘thermal compression’ process by the water (known as the ‘solute’). Referring to the GAHP system in Figure 1 on page 14, heat is supplied to the generator (1) by the gas burner to vaporise the refrigerant (ammonia) from the water.

While the high-temperature ammonia vapour goes off to the condenser (4) to provide heat to the building system and condense into liquid ammonia, the water (now less diluted by ammonia) passes through a throttling valve (2) that reduces its pressure (and temperature) to enter the absorber. The ammonia – having rejected heat in the condenser, flowed as liquid through the throttling valve (5) been heated by the outdoor air in the fan-assisted evaporator, and reached the outlet of the evaporator (6) as a low pressure vapour – is then drawn into the water that is in the absorber (3). This part of the absorption process will reject heat (which can be usefully employed by the system) as the ammonia vapour is drawn into the water.

From there, the mixture is pumped (7) to the higher pressure of the generator (1), where the cycle starts again. The energy required to pump the liquid is small compared with the heat supplied to the generator, and so this process is thought of as ‘thermal compression’ as opposed to ‘mechanical compression’.

To ensure high performance, units will incorporate generator-absorber heat exchanger technology that boosts the efficiency of the unit by recovering the heat that is released when the ammonia is absorbed into the water. The gas burner is also arranged so that the water vapour in the flue gases can condense by exchanging heat with the cooler low-pressure ammonia.

The heat delivered by a heat pump is theoretically the sum of the heat extracted from the heat source plus the energy needed to drive the cycle. Practically, there will be losses from the system, and the performance of heat pumps is typically expressed as the coefficient of performance (COP). Because of Carnot3 efficiency limits, this will approach 1.0 as the outdoor-to-indoor temperature difference increases.

This ratio is a measure of the overall efficiency of heating device, taking into account the energy losses related to the generation of electricity. A higher primary energy ration (PER) corresponds to a more energy efficient system.

The average efficiency of European thermal power stations is approximately 50%,4 so two primary energy units are required for one unit of electrical energy.

An electrical vapour compression air-source heat pump is likely to have a seasonal performance factor (seasonal COP) of approximately 3 so, for this example, the PER = 3/2 = 1.5.

In the case of a GAHP (or any direct combustion product), the energy is supplied directly in the primary form of gas, so the PER is simply the seasonal performance factor for a particular GAHP.

(This excludes transmission losses in both gas and electrical distribution.)

The primary energy ratio (PER – see box) can provide a useful common baseline for comparing heat systems that are fuelled by different energy sources.

An application of GAHP 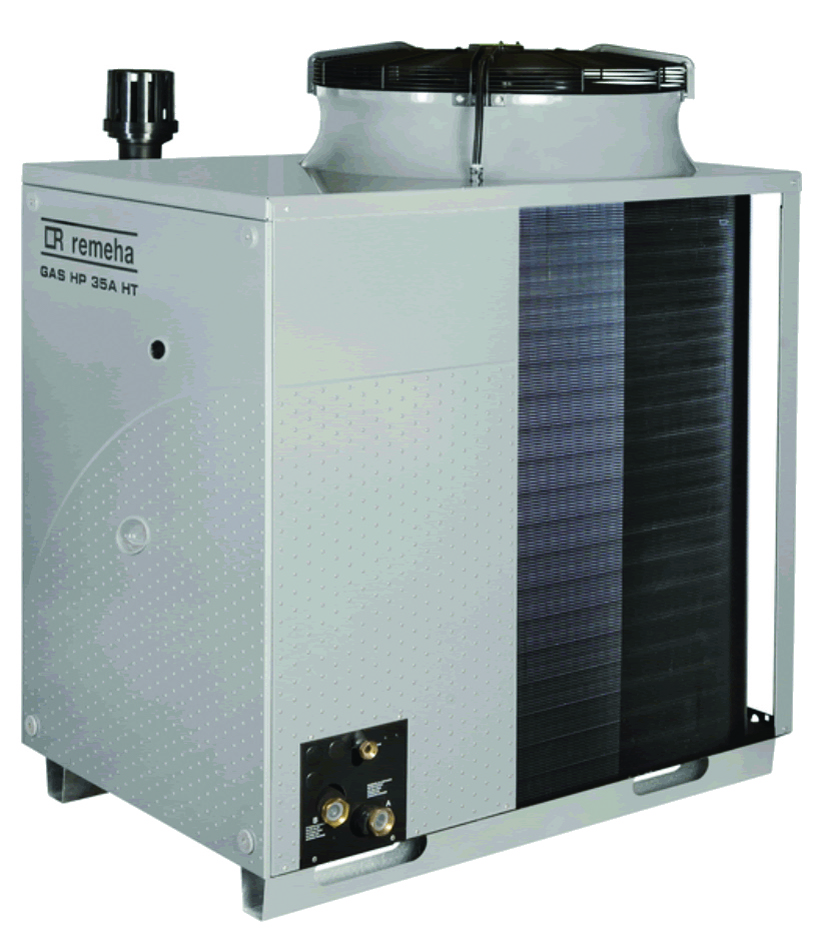 As an example, a GAHP (Figure 2) is fitted as part of a bivalent system in a building. The other source is a condensing boiler and – potentially for use at higher external temperatures – an optional electric heat pump. Considering data from the example building (based on external conditions at a Dutch site) in Figure 3, the PER of the GAHP is consistently above 1. At outdoor temperatures below -3°C, the flow temperature of the weather-compensated heating circuit (shown by the red line) requires temperatures of greater than 65°C. At this point, the condensing boilers – which make up the other half of the bivalent system – would work in a ‘cascade’ arrangement to increase the flow temperature above 65°C. However, this would be for a limited number of hours per year (as indicated by the area shaded yellow).

For comparison, an indicative PER for a typical electrically-powered vapour compression air-source heat pump is also shown. The heavy, blue dashed line illustrates the best PER of the two heat pumps. At 8°C and below, the GAHP is likely to outperform the air-source heat pump (in heating area shaded green) – the PER for the GAHP remains relatively constant across its operational range. Above 8°C, the electric heat pump PER is higher (the heating region in red). 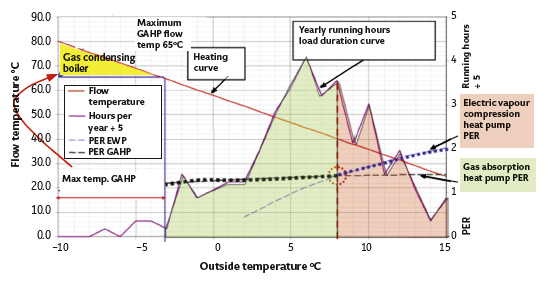 The GAHP capacity would be selected to match the base thermal load of the building, with the condensing boilers modulating online when the load requires a flow water temperature higher than 65°C. Such GAHP installations can achieve seasonal COPs of around 1.25, with carbon reductions of up to 40% compared with traditional gas equipment.

GAHPs can be particularly effective for installation in heating systems with a traditional heating curve, as would be experienced in northern Europe. During winter periods, when the heat is in most demand, GAHPs can operate efficiently at sub-zero external temperatures, while still being able to deliver flow temperatures up to 65°C.

They can provide a particularly beneficial and energy-effective solution where a gas supply is present but significantly upgrading the electrical installation would be challenging. In renovation projects, this can be attractive – as GAHP consume relatively small amounts of electricity – and the outside air is used as the heat source (compared with the more expensive, and potentially disruptive, ground source).

Depending on the required heating load, heat pumps may also be suitable as a direct retrofit solution for systems using fan coil units. The design of such an existing system will likely be based on the cooling loads, so there will normally be an inherent heating overcapacity, enabling the GAHP 65°C flow temperature to be used to fully meet the heating load.

Heat pumps can be designed specifically for the lower-grade heat loads (underfloor heating and hot water pre-heat), with the condensing boilers serving the higher temperature radiator circuits or main hot water calorifier. There are GAHPs available that are particularly optimised for low-temperature applications.

As with any other air-sourced heat pump technology, the GAHP requires frost protection to prevent the evaporator coils icing up when the outdoor air is cold and humid. Typically, the integral control system has two-stage frost protection, with the circulating pump being switched on for the first stage and, if necessary, the burner fired in conjunction with the circulating pump for the second stage. If the gas or electrical supplies cannot be guaranteed during colder weather, then a water/antifreeze mixture should be considered (as recommended by the manufacturer). 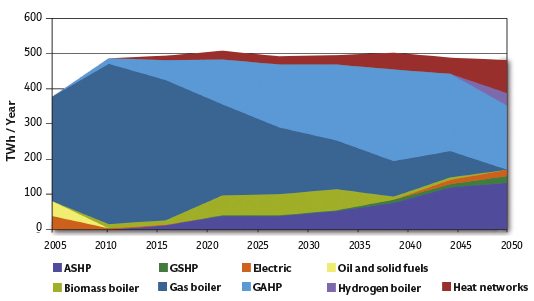 Figure 4: Predicted domestic and non-domestic buildings heat output by technology in 2050, as modelled for The Future of Heating: Meeting the Challenge (Source: DECC)7

Clearly, there is a need to control bivalent systems properly to ensure that they may run most effectively. As well as the normal requirements of safety, temperature compensation and modulation (for comfort and efficiency), frost control and legionella protection, in a bivalent system there is the integration of the two (or more) heating sources. This has been a challenge in some existing bivalent systems, leading to poor overall performance and loss of confidence. However, manufacturers have recognised this difficulty and some are leading the market by offering systems integration with control – and, in some cases, remote monitoring – that is bespoke to a particular application. Together with simplified control interfaces, this should provide greater opportunity to apply GAHP in suitable projects.

The future growth of GAHP is predicted in the model produced for UK DECC’s The Future of Heating: Meeting the Challenge report7 (as shown in Figure 4). This suggests a growing role for more efficient gas appliances, with GAHPs (shown in light blue) – as part of bivalent systems – playing a significant part in the supply of heat to buildings.

7 The Future of Heating: Meeting the Challenge, Evidence Annex, DECC, 2013.