Fluorinated gases (F-gases) contributed 2% of total EU-27 ‘greenhouse gas’ (GHG) emissions in 20101, and the EU’s F-gas regulations are aimed at reducing global warming by limiting their application and consequent emissions. In March 2014, the European Parliament voted to introduce tighter regulations on hydrofluorocarbons (HFCs), to ensure a significant reduction in their use by 2030. This CPD article will consider this in the context of air conditioning applications.

The new regulations2 – applied from January 2015 – both repeal and enhance the controls introduced in the 2006 legislation3 on the handling of HFCs, including refrigerants used in air conditioning and refrigeration equipment.

The regulations originated in the drive to reduce emissions of fluorinated greenhouse gases – covered by the Kyoto Protocol – through controlled containment and active prevention. The This module considers the impact of changes in EU regulations aimed at reducing global warming by limiting the use of F-gas refrigerants in air conditioning Implications of enhanced F-gas regulations for air conditioning applications increase in the application of HFCs had been driven by the replacement of the ozone-depleting refrigerants outlawed by the EU in 1994.4 The 2006 EU regulations set out to restrict fluorocarbon use, permitting the continued use of HFCs – such as R410A – under strict controls to prevent environmental damage. Almost all refrigerants have a global warming potential (GWP), as shown in Table 1.

Hydrochlorofluorocarbons (HCFCs) – such as R22 refrigerant and certain aerosol propellants – have already been banned because of their impact on global warming and ozone depletion. Systems using R22 are still allowed to operate; however, should it be necessary to work on the refrigerant circuit, the refrigerant ‘charge’ has to be removed from the system and treated as a hazardous waste – so any reduction in charge as a result of leakage or major component change will render them inoperable. Most manufacturers do not recommend the

Significant changes to F-gas regulations: Refrigerants with GWP over 2,500 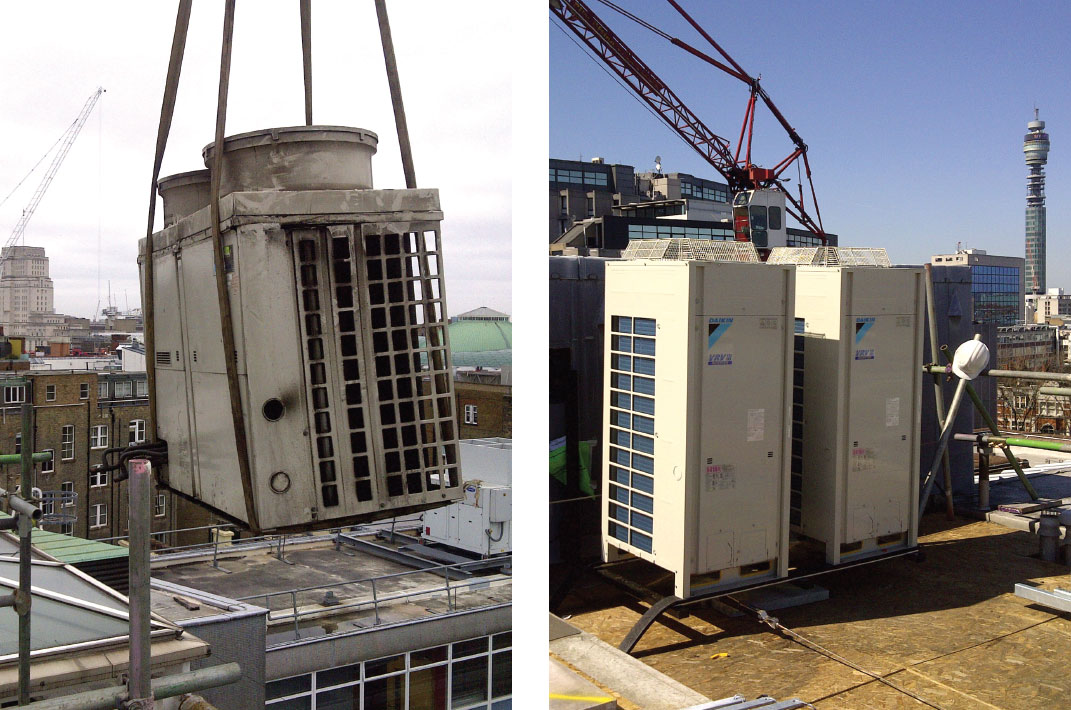 Figure 1: The old system is replaced with a new F-gas-compliant system while using existing pipework, so reducing disruption to existing ceilings and internal fittings that would add additional cost to a replacement project (Source: Daikin UK)

Refrigerants with GWP below 2,500

This part of the regulation deals with new refrigerants being supplied to recharge operational systems and new precharged equipment from 2017. Should a system charge be recovered and cleaned, or recycled, it will fall under a different section of the new regulation that will allow its reuse, and its use will not be determined by the phase-down process. 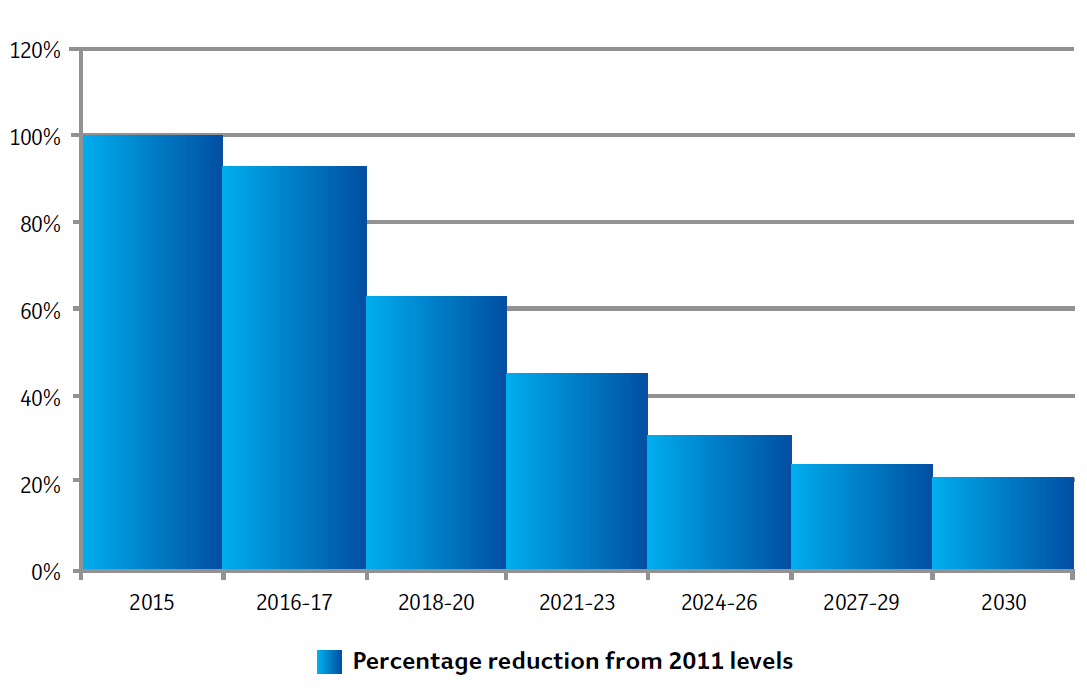 The same metric may be used to compare the global warming effect of any greenhouse gases – for example, refrigerants, sulphur hexafluoride (SF6), perfluorocarbons (PFCs), methane and nitrous oxide. The chosen time period to compare the CO2e – in this case 100 years – can make significant comparative differences, since the decay life of gases can be very different. Some F-gases, especially HFCs, are relatively short-lived; others, in particular PFCs and SF6, can remain in the atmosphere for thousands of years.

The metric ‘carbon dioxide equivalent’ does not take account of operational application. This will alter the true comparative life-cycle global warming effect of refrigerants, since seasonal coefficient of performance (SCOP) and seasonal energy efficiency ration (SEER) will significantly affect the systems’ energy use, and these will be dependent on the thermodynamic performance of the refrigerant, as well as the system design and operation.

While a refrigerant such as R32 is still part of the phase-down, it is widely regarded as a replacement for R410A: it is to be expected, therefore, that its use will be expanded because of the ability to use higher charges, but with lower CO2 equivalence. R32 systems are already available from some manufacturers (as in Figure 3, below), with training given to contractors on the differences between existing refrigerants and R32. Many manufacturers are developing R32 systems.

The new F-gas regulations increase leakdetection obligations, so if a refrigerant has a higher GWP, more leak-checking will be required. For example, regular leak checks by a certified installer are required for systems in which the refrigerant equates to more than five tonnes CO2e (more than 10 tonnes CO2e for hermetically sealed systems).

While the principles of certification, leakchecking, recovery and logbook-keeping remain unchanged, the new regulation introduces an obligation for certified persons to have access to information and training on correct practices and alternative technologies to replace or reduce use of F-gas. End-users and companies are also required to keep the logs for up to five years.

Pre-charged split-type systems that could previously be sold without restriction to end-users may now only be so sold if vendors receive written proof that the systems will be installed by F-gasregistered installers.

The Environment Agency enforces F-gas regulations in the UK, using the following guidelines:

• Provide targeted advice and guidance to an organisation to secure compliance
• Serve an ‘enforcement notice’ on suspicion of past, present or future contravention
• Serve a ‘prohibition notice’ for contraventions posing imminent danger of serious environmental pollution.

Fines for F-gas contraventions will not exceed £5,000 in a magistrates’ court, but could be unlimited in higher courts. The penalties may appear severe, but the enforcement process generally gives the operative or company the opportunity to rectify errors. The enforcement notice, for example, details suitable remedies and sets a deadline for implementation. 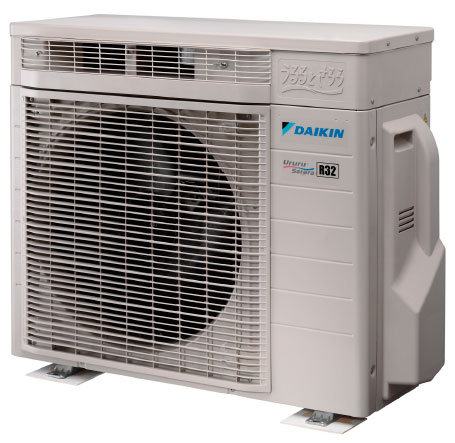 A prohibition notice empowers the Environment Agency to insist that an item of equipment – or a whole site – be shut down.

While it is the responsibility of the Environment Agency to manage this process from a legal perspective, it would seem appropriate for specifiers/ project managers to confirm the status of those working on site during installation and charging of an HFC system. (There are more than 36,000 F-gas-qualified operatives in the UK, with more being trained.)

Through the application of the F-gas regulations, the EU predicts that F-gas emissions will be cut by twothirds by 20302, compared with 2014 levels. The legislation is aimed at stabilising CO2e levels at just above 100m tonnes by 2030. However, to achieve the EU’s roadmap for 2050, additional measures will be required. This suggests a further tightening of F-gas regulations will be inevitable.

In the longer term, manufacturers will be looking to utilise other refrigerants and new compression technologies to meet more stringent F-gas regulations. Already, there are refrigerants with single-digit GWPs. These include HFOs (unsaturated HFCs) and the inorganic compounds such as CO2, propane and ammonia. HFCs (including R410a and R32) will, however, be supported up to 2050 potentially.

Designers should plan, and specify, the use of the most appropriate refrigerant for the system, while keeping abreast of new refrigerants with lower GWP as they become available in the market. Products using R32 are already on sale – albeit in small systems. They tend to have a higher coefficient of performance (COP) and energy efficiency ratio (EER) than the R410a equivalents, and alternative refrigerants, such as HFOs – used in chillers – are slowly coming on to the market.

UK-based Gluckman Consulting – in a very recent information sheet5 produced in conjunction with the UK government’s Department for Environment Food and Rural Affairs (Defra) – states that ‘as a general rule, HFCs used in current applications have a better set of properties than the available alternatives’. This could change, however, with future advances in technology. When considering any refrigerants, these must be assessed holistically for operating pressures, energy efficiency, materials compatibility, toxicity, flammability and cost.

Simply reducing the refrigerant charge in a system is good practice (reducing the carbon dioxide equivalent). For example, reducing pipe runs and locating external units around a building, rather than just in one area, can be beneficial.

Manufacturers’ systems that involve a totally different approach, potentially with new technologies, can take up to 10 years – and beyond – in development to achieve the necessary efficiency and reliability. However, adapting a current system can be much swifter – potentially three to five years.

Most VRF/V systems are currently specified to operate for up to 15 years. However, many still operate efficiently beyond this. HFCs (including R410a and R32) will be supported up to 2050 potentially, so could, theoretically, be applied for operation over the next 35 years.

However, it would be easier to meet the 2030 phase-down targets by having systems with a lower CO2e – and this has led many in the industry to focus on adapting current technologies from R410a to R32. To plan for the application of R32, new system design primarily needs to take into account the lower capacity and higher efficiency of R32. This can be done over the next three to five years – so specifiers can continue to stipulate R410a systems during this period, while keeping track of R32 developments.

Modern systems integrate procedures for actively managing system-leak checking – for example, by using integral routines for some systems, the monitoring becomes a regular maintenance procedure and reduces the opportunity for unnoticed refrigerant loss.

Manufacturers are implementing solutions that are designed to meet the legislation, as well as being mindful that EN3786 – the European standard for the design and construction of refrigeration systems – is still to catch up with these changes to F-gas regulations. This is likely to have the most significant impact on larger systems with higher charges.

In the longer term, beyond 2030, HVAC companies will aim to develop new systems – possibly based on different technology – that continue to deliver efficient, reliable HVAC systems at a competitive cost, while also reducing their environmental impact