The design and application of variable refrigerant volume/variable refrigerant flow (VRV/VRF) systems has been explored in previous CPD articles. This CPD will consider the provision of VRV systems to provide comfortable cooling efficiently throughout the lifetime of the system, taking into account both current demands and the increase in loads that climate change is predicted to bring.

Occupant comfort is the principal purpose in the design of many HVAC solutions. It is thought to be common practice that equipment is oversized at the design stage to ensure capacity can be met both now and in the future, as well as ensuring that the VRV units operate at optimum efficiency for the majority of their operational lifetime.

In a recent analysis1 of sampled European applications of heating and cooling delivered by VRV equipment, 80% of the systems never exceeded 50% of installed capacity. The sample set included many different applications. However, the majority were installed in hotels that, by their very nature, tend to be designed for full occupancy – although that is consistently not the case.2 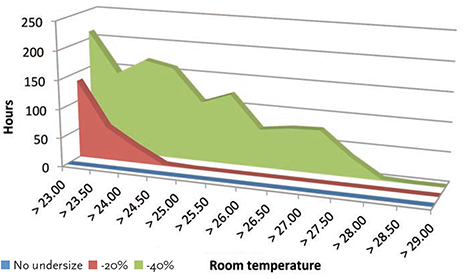 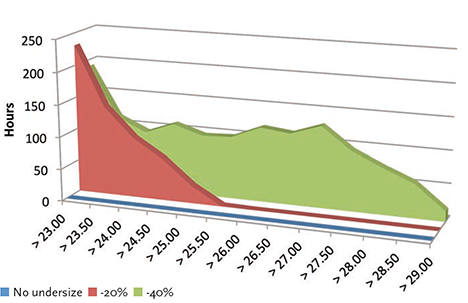 An oversized system that employs variable volume direct expansion refrigeration will operate the compressor more slowly when it is running at part load (as there will be less refrigerant flow). This will improve compression efficiency and is also likely to increase the component life. Typically, VRV/VRF systems will be selected and installed with peak operating capacities beyond the maximum concurrent design room loads, to take advantage of this improved part-load performance.

An undersized system, at times of high demand, will not be able to meet the required load, so the controlled space will not meet its design condition. The deviation is dependent on the configuration of the system and its actual capacity. In a multi-split or VRV system, any deficiency in available capacity is likely to have the greatest impact in the room units that are most distant (in terms of overall refrigerant pipe pressure drop) from the compressor. Those rooms will be least likely to meet their design set-point during periods when the central plant is unable to meet the combined load of all the room units.

In typical VRV applications, such as offices in temperate climatic zones, the peak cooling load usually occurs only for a short period of time – typically between 2pm and 4pm, where building cooling loads are sensitive to solar gain – and this would be for just a few summer days. If the system was slightly undersized, this might mean that the controlled internal temperature would rise by less than 1K above design. Since such days would be hotter than a normal day, this may well not be noticed by the occupants as they adapt to the external climate. The period of under-cooling may still fall within reasonable limits – as defined by annex G of the comfort standard EN 152513 – and so meet comfort criteria. (For a discussion of human adaptation to increased internal temperatures, see CIBSE Knowledge Series 16, How to manage overheating in buildings.)

However, the actual period and magnitude of deviation will be dependent on the application. To explore the consequences of undersized systems, the following simulations4 have been undertaken for a large open-plan area within an office building. The room design temperature is 23°C – at the lower end of the range recommended by EN 15251 for an air-conditioned office space. Figure 1 illustrates the output, based on three example installed system capacities:

The output from the model indicates that the system designed to meet – and, typically, slightly exceed – the peak room load would, as might be expected, provide room temperatures maintaining the design set-point (as shown by the red line). When a system is undersized to meet just 80% of peak load, the room exceeds the desired room temperature for 224 hours and reaches a peak of 24.5°C. Depending on the rationale behind setting a (reasonably moderate) room design set-point of 23°C, this could well beseenasprovidingreasonablelevelsof comfort for most of the time. With a system undersized by 40%, the room reaches 28°C on the hottest modelled days and exceeds the room set-point temperature of 23°C for 1,158 hours per annum. For many occupants, this is unlikely to be acceptable for an air- conditioned space.

However, a VRV system lifespan is likely to be 15 years. As a check against the predicted impact of climate change, a weather file for the same location has been applied to the model, using predicted data for the year 2030 from IPCC climate model A1B5 – 33 percentile – a reasonably conservative prediction of climatic temperature change. The output of this is illustrated in Figure 2.

The system that was sized to meet – and slightly exceed – the present day loads is still able to meet the predicted load for 2030, and so maintain the design-temperature. This is because the selected system has spare capacity available – to allow the system to operate most efficiently at part-load for most of its operational time – and because VRV systems would typically have the ability to provide additional capacity to room units for short periods of time. It will mean, however, that the VRV compressor is running at high speed for long periods. Considering the 20% undersized system, the space temperature is above 23°C for 555 hours and reaches maximum temperatures of 25.5°C, while with the 40% undersized system, the room reaches 29°C and fails to deliver the room design-temperature for 1,283 hours. The 40% undersized scenario is unlikely to be acceptable, and the 20% undersized system will probably work at poorer levels of efficiency for long periods of time.

So, by virtue of the selection procedures for VRV/VRF, the unit that is designed to satisfy current loads is likely to cope with the increased external temperatures expected by 2030. It might be considered the ‘correctly’ sized system, but it is actually, by inference, being oversized for current loads. This is based on the premise that operating VRV systems at part load is more energy efficient. However, there is a limit to this as, when the load requirement drops below the minimum variable speed of the compressor speed controller – typically an inverter model – the efficiency will drop. For example, ‘hot-gas bypass’ will be used for further capacity management and the system may cycle. The point where a VRV system will reach this will be dependent on the system but, typically, when the system demand reduces to around 4kW(formostcommercialsizesofVRV/ VRF), it is likely the system has reached its lowest inverter speed. From a comfort perspective, this can be experienced as slightly unstable swift changes in off-coil temperatures.

In the 30 years since VRF/VRV systems were introduced, room unit cooling capacity has traditionally been controlled by throttling the flow of refrigerant – latterly, by electronic expansion valves – to the room fan coil as the area approaches – typically, within 1K of – its set-point. This creates a reduction in capacity and raises the off-coil air temperature, but will not alter the evaporating temperature (or pressure), although it will reduce the overall flow of refrigerant.

However, there are significant benefits to the operating performance of a vapour compression refrigeration system if, rather than altering the flow of refrigerant, the evaporating pressure is increased – so increasing the room coil temperature. To take advantage of this, recently introduced techniques for VRV are employed to control the system-wide evaporating temperature directly – through an embedded computer- controlled combination of compressor adjustment and valve arrangements – to improve the seasonal performance of the units. This type of automatic control has benefits – particularly on comfort – since it will operate across the whole range of demand, gradually modulating the room coil temperature (and so supply air temperature), as well as improving efficiency.

The graph in Figure 3 illustrates this for an example application. In this scenario, as the overall demand reduces, the system evaporating temperature is increased (from 6°C up to 11°C) to cater for the reduced load. By doing this, the compressor efficiency is significantly increased at lower loads, ensuring a high seasonal efficiency by maintaining the most suitable compressor operation for a longer period of time.

So, at times of high room load, there will be the largest difference between the air supply and the room design temperature (with an evaporating temperature of 6°C). At these times, particularly where the load is modulating, the occupants may potentially welcome the cooling effect of the lower temperature supply air, rather than perceive it as an uncomfortable ‘cold draught’.

This might be explained by the thermic alliesthesial effect, where the human’s thermal perception seems to be positively ‘influenced by changes in skin temperature, particularly when they serve to address an environmentally or metabolically induced thermal imbalance’.6 As room temperature approaches the set-point, the VRV unit evaporating temperature will increase, so increasing room coil and consequent supply air temperatures.

As the evaporating temperature increases, the sensible heat ratio – the proportion of sensible/total cooling – rises, so the indoor unit predominantly undertakes sensible cooling. This is likely to be advantageous, rather than unnecessarily dehumidifying the room air.

So, through appropriate design and selection, it is possible to provide VRV systems that not only deliver appropriately comfortable supply air temperatures, but also have both the flexibility and capacity to satisfy cooling demands across their operational life, while delivering acceptable seasonal efficiencies.

We gratefully acknowledge the input of Richard Green, VRV specialist in the product management and engineering group, Daikin UK, for developing IES models and providing core materials for this CPD article.