Desiccants have been used for dehumidification in industrial processes for many years – since at least the 1930s – aswell as, to a lesser extent, in commercial air conditioning. This CPD will explore some aspects of the application of liquid desiccant dehumidification systems as a means of controlling air humidity – a technology that is increasingly being seen in building services applications.

The control of humidity is the attribute that changes simple tempered ventilation into ‘air conditioning’. There are many types of humidifiers available (as discussed in CIBSE Knowledge Series 19 – Humidification1). However, in air conditioning systems, dehumidification is normally undertaken simply by cooling air below its dew point, to condense the associated water vapour and so reduce the absolute moisture content. Traditionally, air conditioning systems have used cooling coils that sensibly cool the airso it reaches its ‘dew point’ temperature. There after, if the dry-bulb temperature is further reduced, the air’s absolute moisture content is reduced, as water vapour condenses from the air – as shown by the process A-C in the psychrometric process illustrated in Figure 1.

Solid desiccants are often used in a wheel, having a similar appearance to a thermal wheel, using the adsorbent silica gel (sodium silicate) as the part of the packing in the wheel (as in Figure 2). As the wheel turns, the desiccant passes alternately through one air stream – where the moisture is adsorbed – and then through another air stream, where the desiccant is dried and the moisture expelled. This second process is known as regeneration. Typically, 60% of the face area would be used for the dehumidification process.

Since the desiccant is solid, there is no carry-over of the desiccant into the airstream. Regeneration is normally carried out by theuse of a heating coil – such as a water or steamcoil – or a direct-fired gas burner to heat a stream of hot air that then passes through the remaining segment of the wheel (about 40% ofthe total face area). Silica gel can be regenerated successfully at temperatures of 60°C to 70°C, although higher temperatures are often used to provide more effective operation. 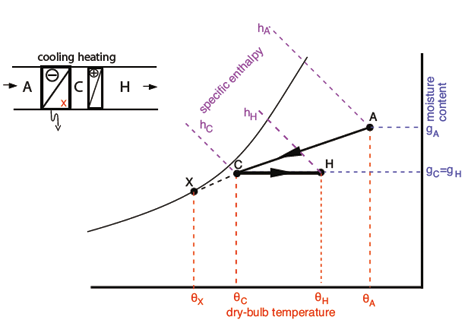 Figure 1: Example psychrometric process of a cooling and dehumidification process followed by a reheater

There are many – often conflicting – definitions of ‘absorption’ and ‘adsorption’, both of which are ‘sorption’ processes. This explains the terms as used in building services engineering: Absorption is when a substance is fully integrated into another and the molecules undergoing absorption are taken up in the volume of the material – whether it be gas, liquid, or solid – and evenly distributed within the material. This can be a chemical (reaction) or physical (dissolving into a liquid) process. Absorption is an endothermic reaction, as it requires energy to alter the molecular state to form the new compound, and so it draws heat from its surroundings. Lithium chloride and sodium chloride (salt) are absorbents. The absorption cycle is commonly used in HVAC absorption chillers, typically using a solution of water and lithium bromide, or ammonia and water (as the absorbent) for cooling systems.

Adsorption is when one substance is being held inside another by physical bonds on the maze of internal surfaces. Activated carbon, silica gel and zeolite (volcanic rock) are examples of adsorbents. The desiccants will not chemically combine, but a film of adsorbate is created on the complex and extensive network of ‘surfaces’ (internal and external) of the adsorbent. Heat energy is released in the process, as the water vapour is adsorbed – that is, it is an exothermic process. Adsorption chillers – using a solid adsorbent, together with water as the refrigerant – for building services are rather more rare than absorption chillers.

The basic process appears little different to that of solid desiccants – one of sorption and regeneration. Liquid desiccant systems will normally use the hygroscopic properties of a salt solution to dehumidify the air. The solution is exposed to the high relative humidity airstream – typically, outdoor air – and attracts water vapour from the high vapour pressure air to the lower vapour pressure liquid desiccant. The air will follow practically a psychrometric process line of almost constant enthalpy as it passes through the dehumidifier (process A-D in Figure 3). The dry-bulb temperature of the air can then be reduced through a sensible cooling coil (process D-C) for supply into the room. The air power required for moving the air through the device will be less than that for an equivalent solid desiccant wheel.

The regenerator uses heat to drive off the absorbed moisture and ‘reconcentrates’ the diluted desiccant. Liquid desiccants require lower temperatures to regenerate than their solid counterparts. Once the desiccant is regenerated, it is cooled, and can then be used again in the conditioner.

The cooling of the desiccant solution may be achieved by using water – often from a cooling tower – or by using an evaporator of a small refrigeration system that, in turn, provides heat through its condenser, to heat the desiccant solution in the regenerator. Yao3 recently reported that the regeneration process may be made significantly more efficient – that is, require less heat energy and also reduce the temperature increase of the concentrated solution – by applying ultrasonic disturbances to the regenerating fluid. 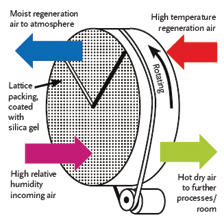 Higher desiccant concentrations and lower temperatures will reduce the equilibrium dew-point temperature. However, as the concentration increases towards 50%, the risk of crystallisation is very high – and this will stop the system working. These liquid desiccants can also act as a filter against microbial contamination and moulds carried in the incoming airstream.

Triethylene glycol has been used to provide sorbent dehumidification in industrial applications. It is less corrosive than the salt solutions, but it evaporates readily into the air. An alternative, cheaper desiccant – potassium formate – has recently been shown5 to be as effective and more environmentally benign, as well as less corrosive, and to be particularly appropriate for high-humidity, high-temperature applications. However, there may still be some qualitative issues2 – such as odours and biological performance – that need investigation.

The possible configurations and/or the composition of the components that make up a liquid desiccant dehumidification system can vary widely, depending on the desiccant and the application. However, Figure 3 shows a simplified outline of the principal components in a system. (The eliminator plates prevent the carry-over of liquid desiccant into the leaving airstreams.) Where the system is predominantly used to moderate the fresh air moisture content, the capacity of the dehumidifier is likely to be configured to treat only the ‘fresh-air’ ventilation component of the airflow. The regeneration temperatures are such that the heat may often be provided from waste heat sources or solar panels.

In the experiments by Qiu6, a system was demonstrated working effectively as part of a combined system placed in series with an evaporative cooler – which was used to reduce the sensible temperature of the finally delivered airstream – where the heat for regenerating the desiccant was waste heat from the flue gas of a biomass boiler, using an in-flue heat exchanger. 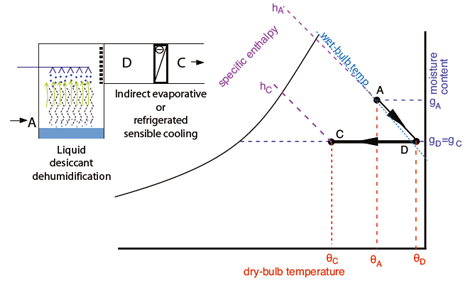 Figure 3: Psychrometry of simplified desiccant dehumidification and example of a sensible cooling system

A liquid desiccant dehumidifier would typically be used in series with a sensible cooling device to reduce the air’s dry-bulb temperature. Since the second coil is used for sensible cooling only, it will operate dry – this can be advantageous in that it reduces the opportunity for biological contamination. The coil would also operate at a temperature higher than would be used in the system illustrated by the psychrometric cycle in Figure 1, so the coefficient of performance (CoP) of any applied refrigeration system would be improved.

In the paper by Jain7, there is an extensive review of operating desiccants and their application – derived from experimental investigations – indicating that, with careful design of the conditioner and its operating parameters, including the ratio of desiccant solution to air flow rates, inlet concentration of desiccant and packing size can result in high dehumidification effectiveness of 0.9 or more.

The effectiveness is based on the potential dehumidification provided by the potential vapour pressure difference between the inlet air and the incoming desiccant.

Liquid-to-air membrane energy exchangers (LAMEEs) are being developed to provide the interface between the air and the liquid desiccant – this prevents any carry-over into the airstream by using semi-permeable membranes. These allow the transfer of water vapour, but do not permit any liquid droplets to be transferred. Effectiveness as high as 94% is reported by Abdel-Salam.8

The application of liquid desiccant systems is likely to be best suited to areas of high humidity and temperature (tropical), and/or where there is supply of low-cost heat, and/or electricity is particularly expensive. A low sensible-to-latent heat ratio – meaning that the predominant cooling load is latent – will make a liquid desiccant system particularly suitable.

Applications that benefit from separating dehumidification from sensible cooling, such as food stores with refrigerated cabinets, will also make very suitable candidates for liquid desiccant dehumidification.

Lew Harriman’s The Dehumidification Handbook, published by Munters, is an excellent, all-round reference on dehumidification that can be freely downloaded from the web.