Reading the popular press, one might think that the Ecodesign Directive is there purely to frustrate the consumer by imposing bureaucratic legislation that had no purpose other than to keep Eurocrats in business and to line the pockets of interested parties. However, delving a little deeper uncovers that the development of this extensive set of regulations has truly worthy aspirations, and is underpinned by rigorous research and analysis that is itself under continuous review. This CPD article will provide background on how the legislation is created and why the legislators have particularly focused on many areas that impact building services.

The Ecodesign Directive1 was evolved to ensure proper consideration of the total environmental impacts of products – from design, through manufacture, installation, use and disposal – by the integration of environmental aspects at a very early stage in product design. Moreover, the recent report by the environmental consultant Ecofys2 indicated that every euro saved in energy consumption by implementing the measures would be matched by savings from reductions in utility costs as European energy demands reduce. This could potentially double the predicted €100bn reductions that would result from implementing predicted cost-effective energy-saving measures. This is speculative, of course, particularly as a recent monitored survey3 of UK homes indicated that the most ‘energy conscious’ consumers used 10% more energy than the average – possibly hinting that when ‘low energy’ products are used, there may be temptation to use them longer or more frequently. 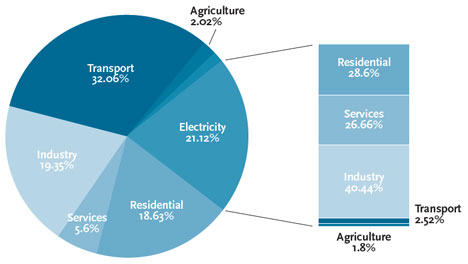 Figure 1: Breakdown of energy use across the 27 countries of the EU6

An overarching concern is that the EU is currently highly dependent on external energy supplies – importing more than 80% of oil, 60% of gas and 40% of coal. Fuel security is a keen driver for change, and if no adjustments are made, imports would account for 66% of EU energy requirements by 2020.4 The current final energy consumption across the 27 EU countries is around 13,500 TWh pa5, divided as shown in Figure 1. In the first phase of the Ecodesign development, originally aimed to complete at the end of this year, electrical products were the principal focus both in the residential and ‘tertiary’ sectors. (The ‘tertiary’ sector is the ‘services’ sector defined as public sector, education, healthcare, services and commerce.) These two sectors account for about one third of EU final energy, at around 4,900 TWh pa.

By instituting a coherent set of requirements across a wide range of energy related products (ErP), the intent is to ensure a consistent set of mandatory benchmarks. The overriding consideration is that the functionality of a product must not be lowered as a result of its conformity to the requirements of the directive. So, practically, the requirement7 that has virtually banned the sale of incandescent lamps should also make proper provision that products that meet the regulation will provide the same light output and usability as the old style light bulb that it replaces. Unfortunately, the interpretation and application of this particular directive (although predicting savings of 39TWh pa by 20208) has caused upset in some sectors of the media and the general public, and has coloured opinion about the whole Ecodesign Directive. So, to properly succeed, the directive should promote holistic practices that consider all aspects of a product’s impact.

The aim is to move the market away from poorly performing products and encourage the development and utilisation of improved technology. The creation of a consistent EU-wide set of rules aims to prevent disparate national legislation on environmental performance and, in so doing, enable intra-EU trade. The Ecodesign Directive works closely with, but is separate from, the Energy Labelling Directive 2010/30.

There has been extensive research to establish the appropriate and proportionate measures to reduce total energy consumption across the EU. The overall goal is to reduce consumption by 15% through these measures by 2020. A product subject to Ecodesign requirements will only be allowed to carry a ‘CE’ (‘European Conformity‘)9 mark if it has complied with the regulations. In 2009, the Energy Related Products Directive (2009/125) evolved from and replaced the original Energy Using Products (EuP) Directive (2005/32)10 – both are referred to as ‘the Ecodesign Directive’. The original energy using products (EuP) were defined as those that use, generate, transfer, or measure energy, including items such as boilers, computers, light ‘bulbs’, pumps and fans. Energy related products (ErP) were initially those that had an impact on energy consumption but not necessarily those that use the energy, include such things as windows and insulation. The term ‘ErP’ is now used universally to cover all products.

The process of establishing a regulation can be somewhat iterative, and may be prolonged, owing to individual states or interest groups having strongly-held opinions.

The process starts with a workplan – the second workplan (for 2012-2014) is still being finalised, but it was fundamentally agreed earlier this year. The products identified for inclusion under the Ecodesign requirements have high-volume EU sales (typically above 200,000 units per annum)11. As a result, the development of Ecodesign regulations relating to the tertiary sector has generally been determined by the relative magnitude of electrical energy use (as indicated in Figure 2). 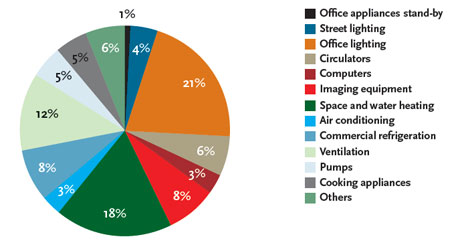 With the workplan agreed, each product group (known as a ‘lot’) undergoes a preparatory study that examines relevant market data and the technological aspects that influence the design, manufacture, operation and disposal of the product. This work, which includes stakeholder meetings, is undertaken by consultants, who are awarded the project by tender. The resulting reports provide extensive and detailed information on the particular product group. These freely available reports are highly recommended as an information source (a recent example being the report for ENTR Lot 6 – Air Conditioning and Ventilation Systems).

This study provides the core information for the subsequent stages. A working document (WD) is produced that is shared with experts across the EU states and is used to inform a Commission impact assessment (IA). Groups of panel experts meeting in the Ecodesign consultation forums (CF) discuss the proposal, and the regulation is drafted.

The proposal is shared among relevant EC directorates to ensure coherence (known as interservice consolidation (ISC)). Having been passed to the World Trade Organisation (WTO), the Ecodesign regulatory committee (RC) – made up from all the member states – votes on it. Subject to there being no objections from the European Parliament and Council, the measure is approved and published in the official journal (OJ).

The methodology to develop Ecodesign regulations legislation grew out of the original Ecodesign Directive (2005/32)12, and has been updated over the last year to account for the experiences of the early regulatory development. The new Methodology for the Ecodesign of Energy-related Products (MEErP 2011) describes tasks, tools, data and deliverables for the preparatory study. It provides a framework to establish whether products are eligible for Ecodesign measures, whether they should have generic or specific requirements and, if specific requirements are appropriate, determine appropriate parameters and identify potential markets and timings (see www.meerp.eu for extensive information of the five tasks that are included in the process). Specific requirements set prescriptive limits, such as maximum energy consumption or percentage recycled content. Generic requirements infer conformance with performance standards, such as being ‘energy efficient’, that would be measured through a relevant European standard. For example, this could be evidence of the source of materials used in the production of the object, such as the proportion of recycled materials, or it may be a requirement to undertake lifecycle analysis so that different products can be compared. The priority is that, wherever possible, voluntary agreements should be applied in preference to mandatory requirements. Experience to date has shown that, practically, this is challenging to implement, and so far no voluntary agreement has been fully endorsed.

The Commission has recently consulted on the second workplan (to run from 2012 until 2014) to develop and review appropriate legislation. This evolved from a review of the effectiveness of the first workplan. Unfortunately, the review process was hampered somewhat, as nine of the measures to be implemented had only come into force in late 2008 and 2009 and, as a result, had not yet impacted on the marketplace. The review13 recognised that measuring the true effectiveness of the legislation was not possible due to a number of factors, including recognition that consumers using ‘greener’ products may actually use them more frequently than they did their older, less environmentally friendly versions.

Figure 3: The process for implementing measures under the 2009 Ecodesign Directive3

The indicative process in Figure 3 illustrates that the time taken to develop regulations has typically been between 32 and 56 months from the initial call for tender for the preparatory studies to the adoption of the final legislation by the Commission. In some cases, however (such as boilers and water heaters), this has extended to beyond six years, owing to extended consultation and evaluation. The legislation to date has linked in closely with the energy labelling directive (and in some cases, an energy label may be associated with the requirements). However, the first workplan review identified lost opportunity and inaction due to lack of connection to WEEE (directive 2002/96, on waste from electrical and electronic equipment) and ROHS (directive 2002/95, on restriction of hazardous substances). The new work programme aims to overcome these deficiencies but, significantly, the review report identifies that a lack of resources in the EC offices may hinder progress in the evolution of the methodology and application.

The review did, however, identify that the measures that had been put in place for lighting appeared to have had a positive and direct impact on energy efficiency, as had those for pumps, where it had particularly focused the attention of industry. And the implementation of measures to control electric motors is expected to strongly influence the marketplace. Although the initial Ecodesign regulations were forecast to save 385 TWh per annum by 2020, there was no reliable data to corroborate this, but the review notes that significant energy savings are possible in the majority of energy related products. Overall, the implementation of directives has shown neither an increase in price to the consumer nor excessive additional cost to the manufacturer. However, it was considered that smaller enterprises shouldered a greater burden in implementing the requirements of the directive. And, although not an explicit intention of the directive, it is having a positive role in the adoption and promotion of innovation.

The second workplan recognises that industry needs certainty and clarity, and that for successful adoption of regulatory requirements, additional resources will be required from the European Commission. Future reviews are likely to include extended term benchmarking and improved metrics. By 2030, the aspiration is that combined energy savings of around 555 TWh per annum (in the residential and tertiary sectors) will result from the Ecodesign Directive.