This CPD will look at the background to Legionnaires’ disease and outline the resources available to determine proper methods of operation and prevention. Prevention is typically achieved by engineers with normal, good working practices.

In 1976, a severe outbreak of pneumonia at an American Legion convention in Philadelphia led to the name ‘Legionnaires’ disease’. The rod-shaped bacteria (Figure 1) found to have caused the disease was called Legionella pneumophila, in reference to the affected group of legionnaires. The term ‘legionellosis’ has subsequently been adopted to describe Legionella bacterial infections including, amongst others, Legionnaires’ disease and Pontiac fever. 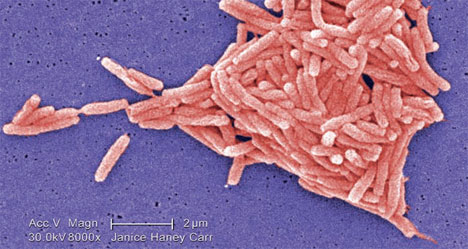 Legionnaires’ disease does not infect everyone exposed to the bacteria – infection rates are in the order of up to 5% of the general population and 14% of hospital patients (owing to impaired immune systems). The generally quoted incubation period is two to 10 days, although studies have observed periods of up to 19 days. The potential fatality rate for infected hospital patients can reach 40-80% although, overall, the fatality rate is far smaller (according to data taken from Legionella prevention of legionellosis, published by the World Health Organisation (WHO[5]). Those at risk from infection through Legionella are typically older than 40 years, and predominantly males who have susceptibility to infection through underlying diseases such as diabetes, chronic heart disease and smoking-related diseases. Those who are ill or infirm, such as hospital patients, are particularly susceptible.

Pontiac fever, which is frequently associated with Legionnaires’ disease, is a less severe influenza (with no pneumonia), with a typically quicker incubation of one to two days and no history of fatalities. There are a number of antibiotic treatments for different strains of infection from the various species of Legionella, with good recovery rates if the infection is identified early enough. 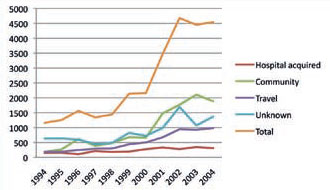 When Legionnaires’ disease is formally reported, it is characterised as community acquired, nosocomial (hospital or healthcare acquired) or travel associated (linked with travel away from normal location). These are used in the data in Figure 2 to show the rising number of reported outbreaks in Europe. Some of the rise may be attributed to more formalised reporting methods.

Legionella is not transmitted from person to person, but is acquired by the inhalation of the bacteria, typically in a contaminated aerosol. Small particle sizes penetrate deep into the lungs, carrying the legionella that cause infection. Larger particles get trapped in the mucous coatings of the respiratory tract and, in ‘healthy’ people, are normally transported out by the conveyor-like ‘mucociliary clearance’ that carries particles away from the lungs.

The bacteria may come from one of any number of reservoirs of water, including (evaporative) cooling towers, pipework and water storage tanks, but the bacteria will also be naturally present in the atmosphere, including in soil, groundwater, seawater and even water on plants. In terms of building services, the principal areas of infection have arisen from cooling towers and hot water systems, including spa pools.

Since 2010, it has been a notifiable disease in the UK. The instances of Legionnaires’ disease are relatively few, compared to other forms of pneumonia, and tend to peak during the summer months – as indicated in the cases recorded in South East England (Figure 3). The trend probably results from a combination of increased external temperatures and greater use of aerosolgenerating devices, such as cooling towers and water sprays, both within and outside the built environment – for example, a recent report in the UK has highlighted vehicle windscreen washers as being potential sources of Legionella infections. The magnitude of annually-reported cases in England and Wales (as shown for 2008 and 2009 in Figure 4) is apparently strongly related to the year’s summer weather. 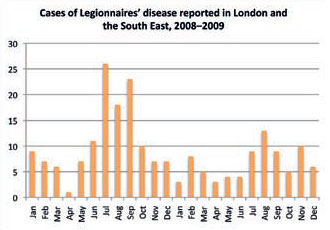 Figure 3: Recorded cases of Legionnaires’ disease tend to peak in the warmer months

Legionella bacteria are destroyed almost instantly above 70°C; however, at temperatures between 20°C and 46°C, as found in many HVAC water sub-systems, Legionella growth is abundant – the optimum temperature being around 37°C. At temperatures below 20°C, there is little growth in bacteria and at a temperature of 60°C, 90% of the Legionella pneumophila have been shown to be killed in two minutes (compared to several hours at around 50°C). At low temperatures, Legionella becomes dormant but ready to multiply when the opportunity presents itself. Figure 5 relates the range of temperatures to typical applications in building services. 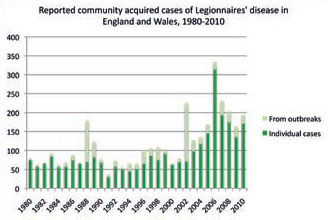 Figure 4: Significant Legionnaires’ disease outbreaks are, fortunately, quite rare. The high incidence of individual cases in 2006 coincides with particularly high summer temperatures. This data excludes infections that were attributed to travel or were hospital acquired (Source: www.hpa.org.uk/web/HPAweb&HPAwebStandard/HPAweb_C/1195733748327)

Legionella requires nutrients to grow, and these are normally already available in mains supplied water. Biofilms (of which ‘slime’ is a visible example) created through a combination of nutrients, scale and corrosion in appropriate temperatures, provide an ideal breeding ground for Legionella. Such appropriate conditions are frequently established in stagnant water. Rubber gaskets and seals can provide a source of nutrients for Legionella growth, and the presence of biofilms can make previously ‘safe’ materials such as copper susceptible to the growth of Legionella. Even short lengths of stagnant pipework, connected to otherwise Legionella-‘safe’ systems, can provide a breeding ground for Legionella. In many historic outbreaks of Legionnaires’ disease, it has been difficult to trace the specific principal source of the Legionella that caused the infection, since subsequent treatment by biocides or by pasteurisation reduce the concentration of the bacteria.

The successful control of Legionella is as much about management as it is technical detail. Guidance, including the current revisions to ASHRAE Standard 188P[7], focus strongly on the need to establish a robust management and control system. However, there are conditions that will determine whether Legionella has the opportunity to thrive and increase the risk of infection.

If systems are maintained consistently below 20°C or above 60°C, there is likely to be little risk of Legionella growth. Practically, this is not the case in at least part of many hot water distribution systems that frequently operate between 40°C and 50°C (water higher than 50°C presents increasing scalding risk).

Cooling towers will typically hold water at temperatures of between 30°C to 35°C that is ideal for Legionella growth. Drift eliminators are essential to reduce the amount of makeup water carried into the atmosphere; however, some will still escape.

Due to the evaporative processes within a cooling tower, and combined with particulate matter in the outdoor air, a substantial amount of solids can accumulate in a cooling tower. This will provide nutrients for the growth of bacteria and the development of biofilms, and so needs continuous removal and monitored treatment. There are a host of biocide dosing methods including oxidising agents – such as chlorine dioxide and sodiumand calcium-hypochlorite – and those that do not rely on oxidization – such as the surfactant amines, chlorinated phenolics and copper salts. However, this is not a case where more is better, but one where it is important to use appropriate biocides in a planned fashion, based on the monitored conditions of the cooling water.

Recent researchA in test cooling towers has shown that some non-chemical devices – including magnetic, pulsed electric field, electrostatic, ultrasonic, and hydrodynamic cavitation – that are marketed for treating biological growth, are ineffectual. Pragmatically, although the potential growth of Legionella can be minimized in cooling towers with good design, operation and cleaning procedures, it is unrealistic to expect that Legionella can be eliminated from the environment, and so must be controlled with appropriate procedures and water treatment. Poor maintenance procedures have been linked to outbreaks of Legionnaires’ disease associated with cooling towers, such as the recent Edinburgh outbreak that peaked in June. Particular care must be taken immediately following periods of shutdown – maybe after lack of use in winter and spring – where poorly treated systems can accumulate significant Legionella concentrations.

Ultraviolet (UV) disinfection and, of course, pasteurisation – where the water is raised to a high temperature for a set period of time – are successfully used for bacterial control in water services. However, UV and pasteurisation provide localized treatment that will not affect downstream biofilms and, if not continuously applied throughout the system, allow the regrowth of Legionella. Through appropriate design of systems such as reducing dead legs, supplying mains water direct to water outlets, keeping connecting pipework lengths to a minimum, and keeping water storage tanks accessible for cleaning but otherwise sealed, the opportunities for Legionella multiplication may be substantially reduced. Since it is the inhalation of the bacteria within water aerosols that carries the principal risk, that risk can be reduced by not purposely creating aerosols, and by allowing drain down of components when not in use to remove the opportunity for water dead legs. 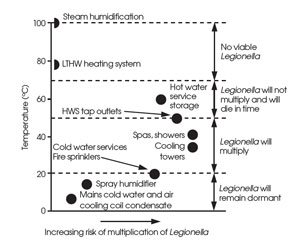 The various codes and standards require that there should be an appropriate water safety plan. The World Health Organization (WHO)[5] splits this into three key elements:

System assessment – This includes undertaking and recording system survey to determine such things as whether Legionella bacteria is likely to be present, level of risk, whether conditions prevail to promote growth, and so on;

Monitoring – This includes setting up and monitoring control regimes to maintain appropriately safe conditions; and

In the case of an outbreak, the potential source should be identified and isolated. This would normally be as a result of epidemiological information gathered by the local health authority. Isolation could be as simple as switching off a cooling tower or a fountain, or as showers being put out of use prior to sampling and subsequent disinfection. Where cooling towers are the suspected source, it is not unusual to undertake emergency treatment of water in all towers in the vicinity. Microbiological testing can determine the subtype of Legionella from infected people, and this information is used to aid identification of the specific source of the outbreak.

With the increase in ‘novel’ low-energy solutions for buildings, care must be taken to avoid potential conditions where Legionella can readily multiply. For example, evaporative coolers used on the inlet to air conditioning systems have become very popular for applications such as data centres. Although there have been no recorded cases of Legionella resulting from such installations, and with proper design and maintenance there should not be, it is important to maintain systems to control the accumulation of sediment that can provide a breeding ground for bacteria.

Although the number of Legionnaires’ disease outbreaks are relatively infrequent, they are potentially life threatening and normally avoidable. By following the readily available guidance given in the documents listed below, and conforming with local codes and standards, the risk may be practically reduced so that outbreaks become not just infrequent but a rarity.

There are several documents and websites (most freely available) that provide guidance on the management processes and technical solutions: