The built environment is rightly focusing increasingly on energy efficiency. But it is important to remember that a primary purpose of the occupied building envelope is to provide a safe and comfortable environment for people – and this where internal air quality (IAQ) becomes a key consideration.

Aside from the easily observable considerations of ‘basic’ occupant thermal comfort, the effects of the IAQ may have transitory or lifelong consequences for building users. Such effects can be highly visible (as with condensation or mould), or less so but easily measurable (as with radon gas accumulation, for example). Some effects can go undetected and, as such, lead to environments that become linked to ‘sick building syndrome’. By maintaining good levels of IAQ, there are likely to be tangible financial benefits through increased productivity and less workplace sickness [1].

As with any real-world design challenge, it is impossible to satisfy all occupants of a building in terms of IAQ. In his seminal work the late Ole Fanger[2] considered the integrating effects for thermal comfort. However, this did not include the effect of IAQ. His later work included the development of the ‘olf’, and he attempts to provide a numerical correlation between emissions and olfactory response (human sense of smell). This is a complex relationship: the ways that people perceive contaminants will itself be affected by the other room conditions including temperature, humidity and lighting, as well as personal preferences and susceptibilities.

In addition, it is unlikely that contaminants in the air will be dispersed evenly in a space, thereby providing IAQ problem ‘hot spots’. In terms of comfort, there are published criteria [3] relating to subjective perception and the acceptable periods for discomfort.

The principal contaminants that are associated with causing problems in IAQ (principally in terms of health) are:

The focus here has traditionally been on PM10, which refers to particles of less than 10 μm (micrometres). But attention has increasingly been turning to PM2.5 (< 2.5 μm) particles that are measured in μg/m3 (micrograms per cubic metre).

The recently published SNIFFER report4 on PM2.5 in the UK provides an extensive summary of the current state of scientific knowledge on PM2.5. It concludes that there are serious health consequences for long-term exposure to PM2.5 (small particles are associated with reduced lung function and increased risk of heart and respiratory disease) and that currently no safe exposure limit is really known. The control of PM2.5 in external air is complex because much is outside local control, although activities such as smoking [5], vehicle emissions and a rise in the use of wood stoves have been shown to increase localised values. (EU directive 50/2008 has set a limiting value for PM2.5 of 25 μg/m3 in outdoor air by 2015.)

This is generally known as environmental tobacco smoke (ETS). Although not such a widespread risk in public areas in the UK, there are many places around the world (as well as in domestic and other exceptions in the UK) where ETS is still a major contaminant. ETS is a mixture of particles that are emitted from the burning end of a cigarette, pipe, or cigar, and smoke exhaled by the smoker. Smoke can contain any of more than 4,000 compounds, including carbon monoxide and formaldehyde (see below). More than 40 of the compounds are known to cause cancer in humans or animals, and many of them are strong irritants. ETS is often referred to as ‘secondhand smoke’ and exposure to ETS is often called ‘passive smoking’.

PAH is an organic class of compounds containing just carbon and hydrogen released from burning of fossil fuel and biomass for both room heating and cooking. The cooking food itself will emit PAHs but the greatest indoor influence is ETS. There is a strong connection between PAHs and lung cancer.

VOCs are chemical compounds that have a carbon (organic) basis and evaporate readily into the air at room temperature. The presence of VOCs is commonly associated with an odour; however, this is not always the case – all can be harmful. There are thousands of different VOCs produced and used daily, examples being Benzene, Formaldehyde, Methylene, Napthalene, Toluene, and Ethylene glycol. Many are not anthropogenic (manmade).

A radioactive gas formed by the disintegration of radium, radon occurs naturally, especially in areas over granite, and is measured in Becquerels (a measure of radioactive decay) per cubic metre of air (Bq/m3). Once produced, radon moves through the ground to the air above. When radon undergoes radioactive decay (it has a half-life of four days), it emits ionizing radiation in the form of alpha particles. It also produces short-lived decay products (progeny), some of which are also radioactive. Unlike radon, the progeny are not gases and can easily attach to dust and other particles. Radon is strongly associated[6] with lung cancer. The Health Protection Agency recently announced that it was introducing a ‘target level’ of 100 Bq/m3, to reflect international guidance from the International Commission for Radiological Protection [7]. The ingress of radon may be reduced by appropriate building details effectively trapping the gas by a gas-impermeable sheeting (plastic) and venting the trapped gas away from the occupied areas.

These include the following:

Ozone (O3) concentrations are generally lower at urban locations than at rural locations. This is due to the destruction of O3 by nitric oxide (NO) that is emitted by vehicles. O3 levels are usually higher during the spring and summer months because of more movement from the upper atmosphere and more sunlight, which allows O3-forming chemical reactions to occur more rapidly. O3 can have a characteristic sharp odour when at very high concentrations, such as that associated with photocopiers and laser printers.

Carbon monoxide (CO) is an odourless, colourless gas that interferes with the delivery of oxygen in the blood to the rest of the body. It is produced by the incomplete combustion of fuels.

Carbon dioxide (CO2) is also a colourless, odourless gas. It is produced when any carbon-based material used for fuel (coal, oil, wood, etc.) is burned, as well as by tobacco smoke, human and animal respiration. Vehicles and industrial equipment, and burning fuel for power are some of the major contributors to CO2 in the air.

CO2 is not generally found at hazardous levels in an indoor environment, and it is often measured when trying to determine the indoor air quality of a building as it can provide an indication of the number of occupants. If the levels of CO2 are high, it is assumed that there may not be adequate ventilation to that area, which in turn may allow for the build up of other environmental contaminants. For a ‘standard’ room occupation a rate of 8 l/s fresh air per person would mean that the levels would rise 600 ppm CO2 which, when added to the normal outdoor CO2 of 400 ppm, gives an internal CO2 concentration of 1000 ppm – this is unlikely to provide any discomfort.

Nitrogen oxides (NOx) arise from combustion and vehicles (including garden equipment), together with hydrocarbons, reacting to produce nitrates and, with the assistance of sunlight, ozone. They have been shown to affect the respiratory tract of humans and increase the susceptibility to infections.

Sulphur dioxide (SO2) is produced in various industrial processes. Coal, oil and petrol combustion generates sulphur dioxide. It irritates the human respiratory tracts and the effects are felt very quickly – within 10 or 15 minutes.

Moulds produce tiny spores that waft through the indoor and outdoor air continually. When mould spores land on a damp spot indoors, they may begin growing and digesting whatever they are growing on in order to survive. There are moulds that can grow on wood, paper, carpet, and foods. When excessive moisture (a relative humidity greater than 60%) or water accumulates indoors, mould will grow. Once established, mould will continue to thrive even at lower humidities and so continue to release musty odours. Potential health effects and symptoms associated with mould exposures include allergic reactions, asthma, and other respiratory complaints.

The removal of mould is particularly hazardous, as when it is disturbed it can release spores into the air that are easily inhaled. There is no practical way to eliminate all mould and mould spores in the indoor environment; the way to control indoor mould growth is to control moisture.

Humidities above 50% at normal room comfort temperatures are associated with adverse health implications for asthma and allergy sufferers. If the space humidity is maintained below 50% for an extended period, the risk of mites can be substantially reduced.

Table 8.2 in CIBSE Guide A (2006)[3] provides some guideline values for currently accepted limit values of exposure to substances – see Figure 1 for part of this list – the exposure levels are given variously in parts per million (ppm) and parts per billion (ppb) depending on their magnitude. 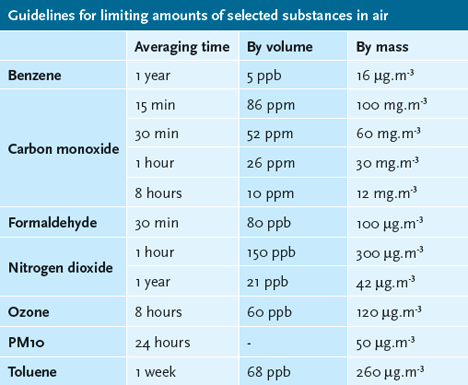 Figure 1: Table of recommended exposure levels for some substances

A BRE study in 2002[8] indicated a wide range of contaminants present in homes with a good degree of correlation with high levels of VOCs such as toluene with houses that suffered with condensation – the likelihood being that high levels of contaminants were present due to poor or inadequate ventilation strategies. Both benzene and toluene are constituents of tobacco smoke and the survey indicated that their concentrations were strongly related to smoking in the home.

The levels of benzene were found to be above the requirements set by the UK National Air Quality Strategy in more than 50% of homes.

The levels of NOx and CO are affected differently to those of the VOCs. VOCs are linked to building materials and furnishings that provide a constant source of emissions throughout the year, whereas CO and NO2 are combustion products whose indoor emissions are mainly activity related and so more prevalent in the cooler months. They are also strongly intermittent and will vary with the use of such things as gas cookers, paraffin heaters and tobacco.

Increased levels of VOCs – as given off by some carpets, PVC flooring and floor varnishes – tend to make the occupants more critical[9] of their thermal comfort – presumably they feel discomfort and can more openly rationalise it in terms of temperature and humidity. Inevitably, newer premises are likely to have higher levels of VOCs due to the materials used, particularly flooring and wall coverings. However, the fabric of a house can also act as a collector (or ‘sink’) for some substances such as NO2 giving potentially lower values inside than outside. External influences such as roads and industrial and commercial processes will lead to higher levels of NO2.

There do not appear to be recently published UK surveys of IAQ in energy efficient homes (those complying with the Level 4, 5 or 6 of the Code for Sustainable Homes) – there is a need for some research. It is likely that areas susceptible to increased flooding in the UK will lead to greater potential problems in IAQ. Standing water and wet materials can become a breeding ground for microorganisms: bacteria, mould, and viruses.

CIBSE3 recommends that the following measures, in sequential order, can be adopted to reduce the exposure of occupants to airborne contaminants in buildings:

When contaminants are being produced within a space, some basic modelling may be undertaken (most easily using a spreadsheet) to establish the averaged levels. ASHRAE Standard 62[10] provides extensive guidance on both single and multi-space ventilation. CIBSE[11] provides some useful formulae to establish ventilation requirements to maintain internally emitted contaminants at prescribed ‘safe’ levels.