The introduction of feed-in tariffs (FITs) in the UK has given a boost to the installation of solar panels and wind turbines to generate electricity. But what about harnessing the power of rivers and streams? In appropriate locations, hydroelectricity can provide a highly cost-effective solution with low maintenance requirements. This article offers an introduction to the use of hydro and an overview of the mechanical side of micro-hydro power generation.

Hydro-electric power generation may be broken down into four general categories according to power output:

Of the 170 hydro schemes currently receiving payments under the FIT scheme, all but three are micro-hydro schemes. One of the key attributes of micro-hydro schemes is that only a portion of the waterway’s flow is used to generate power, so allowing the normal ecological activities to continue with relatively little impact. The planning rules guided by the ‘Good practice guidelines to the Environment Agency hydropower handbook’1 strive to ensure that the environment is largely unaffected; and unlike solar and wind power, the resulting electricity will be produced 24 hours a day (although the amount may vary with season).

The systems can supply DC (for battery charging) or AC (powering appliances) for ‘off-grid’ use, or they can feed back into the grid (just as with photovotaic panels and wind turbines). A micro-hydro system may be as simple as a ‘zero-head’ propeller-type device close-coupled to an encapsulated generator submerged in a free-running stream providing power for riverside lighting. This would require no particular civil engineering infrastructure and only very basic, low-cost electrical conditioning equipment to provide power for charging batteries. However, most micro-hydro systems divert part of the flow from the waterway (stream or river) to pass through a turbine and then return the water (still using no reservoir of water). These are known as ‘run-of-river’ schemes and require some civil and/or mechanical engineering works. Water flow rates of less than 0.5 litres per second (l/s) with a ‘head’ of water as low as 1,000mm can usefully produce power.

The total amount of electricity generation capacity in the UK from hydro power (reservoir and run-of-river schemes) is nearly 1.5GW.2 This is just under 1.5% of the UK electrical power requirement, and it is estimated that there is potential to increase this to 2.5%. As an indicator of potential, the recently published Hydropower Resource Assessment Report identified (Figure 1) far more suitable sites than were previously thought feasible in England and Wales.

In October 2010 the UK government announced that ‘remanufactured equipment’ would also be eligible for FITs, so long as this equipment had not been generating energy after 31 March 1990. This opens up the potential use of disused installations that were previously associated with mills and industrial sites that, before the introduction of FITs, had not provided an economically feasible proposition. The generation tariff for hydro installations (that have been installed under the auspices of the Microgeneration Certification Scheme) is shown in Figure 2. To put this in some context: the total cost of installing a system producing, say, 5kW might be around £25,000. There is an economy of scale here, as much of the basic infrastructure is not wholly dependent upon output capacity: a 5kW system may only cost 50% more than a 2kW system.3

Smaller systems will not visibly have all the individual components, however their function will be present albeit in a consolidated form.

Ideally, the intake is sited at a point in the waterway where both the flow and streambed are stable – solid bedrock, constant flow and a low gradient on a straight section where there is reduced chance of erosion and sediment deposition. Depending on the size of the installation this could be a simple sink, a diverted inlet using a weir or a bifurcated waterway. The intake would have some coarse ‘filter’ with some sort of grating to reduce the intake of flotsam, flora and fauna, this is often referred to as a ‘trash rack’.

This section provides a diverted track for the water that will be used to generate the power. As the water passes through the canal (known as a ‘headrace’ or ‘water race’) any drop in height will not contribute to the available power and so is a loss of potential generation. The forebay tank will allow the water to settle, sediment to drop out and provide a location for a finer trash rack. Excess water (not used for generation) flows freely from the forebay directly back through channels down to the waterway and helps to purge silt so that it does not accumulate and enter the generation equipment. Many micro-hydro systems do not utilise the canal/forebay section as they pass water directly from the intake into the ‘Penstock pipe’.

The penstock pipe is one of the most important elements of the system to optimise the availability of the water’s power. Typically made of HDPE, steel or UPVC, this provides a closed pathway from high level (providing the ‘head’) for the water to enter the powerhouse and generation equipment. As with any pipe carrying liquid the frictional losses will be related to the pipe diameter and the roughness of the internal surfaces. When the penstock pipe is sized it is a balance of pipe cost and pipe diameter, with a rough rule of thumb that the pipe is sized so that the frictional losses amount to no more than 10% – 20% of the available head – the lower the head loss, the more power will be generated.

The ‘powerhouse’ may be nothing more than a mounting frame for weatherproof generation equipment, or it could be a substantial building housing larger scale generation and electrical conditioning and control equipment. The functioning parts of the powerhouse can even be totally submerged to reduce noise breakout. However, it would typically be sited above the point where flooding might be expected, also taking into account foreseeable changes in the path of the river that may take place due to erosion. There should be good access for construction and maintenance – the powerhouse may be some distance from the main waterway to satisfy all of the required criteria.

Leading from the powerhouse, this channel calms the flow and reintroduces the water back into the main waterway.

Normally housed in the powerhouse, the turbine converts the flow of water into shaft rotation that (directly or indirectly) drives the electrical generator or alternator. The choice of turbine will depend on the net head and the available water flow rate, together with the required running speed for the electrical equipment. The range of seasonal flow rates may also affect the selection.

Turbines are split into two principal groups – impulse and reaction. Pelton, Turgo and Banki Michell turbines are commonlyused impulse-type turbines in micro-hydro installations with nozzles directing the water flow onto the turbine. A small Pelton turbine is simple to manufacture, relatively cheap and has good efficiency and reliability. Individual Pelton or Turgo ‘cups’ may be simply cast (or cheaply mass produced in plastic).

Pelton turbines are generally more suited to high-head, low-flow rate applications and Turgo turbines more suited to lower-head, higher-flow rate applications. To adjust for variations in available water flow, these turbines are adapted by changing nozzle sizes or by using adjustable nozzles. The efficiency of both the Turgo and Pelton wheel depends on size and manufacture but is likely to be between 70%+ and 90%+.

The Banki Michell cross-flow turbine will not reach the efficiencies of the Pelton or Turgo turbines (although may well reach 80%) but it is cheap to produce, simple to maintain and has a reasonably constant efficiency (down to 50% design flow) and is ideally suited to low-head applications. A chart comparing the performance of common impulse turbines is shown in Figure 3. 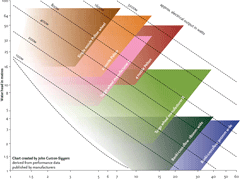 Reaction turbines sit in the full flow of the water delivered by the penstock pipe and are either propeller machines (such as the ‘Kaplan’) that are suited to low-heads and high-flow rates; or they are similar to a centrifugal pump acting as a turbine (such as the ‘Francis’) that are most suitable for mid-range flows and heads (flow properties between those ideal for the Kaplan and the Pelton).

The static-head (or gross-head) is calculated from the vertical distance in metres between the water intake of the system (normally the entry for the Penstock) and the point where the water enters the generator. For reaction turbines the static head includes the vertical distance from the turbine to the bottom of the draft pipe where the water is released back into the stream through the tailrace. The static head can be determined by using topographical maps or preferably, for design purposes, by practical onsite measurements.

The potential generating power from a hydro generation plant is established by calculating the energy released by the falling body of water of mass, m (kg), over a height, h (m static head)

Where ρ = density of water (kg/m3), V = volume water (m3), and g = acceleration due to gravity, and so the power (watts) associated with flowing body of water will be determined by the volume flowrate of water, Q (m3/s) and so Power = ρ⋅g⋅h⋅Q (watts).

This is the potential power available from the flowing water dropping over a head, h, but real installed systems will have losses due to friction in the trash rack, Penstock, etc., turbine efficiency and generator efficiency. The overall efficiency of a system would normally range between 40 percent and 70 percent. A well-designed system will achieve an average efficiency of 55%.

Pnet = η⋅P = η⋅ρ⋅g⋅h⋅Q (watts), where η is the ‘efficiency’ of the overall water, turbine and electrical generator system

And substituting in standard approximate values for ρ and g