Having just come to the end of the first registration period of the Carbon Reduction Commitment Energy Efficiency Scheme (CRC), many large energy users are focusing on opportunities to reduce their consumption to not only reduce costs but also to boost their corporate environmental credentials.

In a four-year, $15m study on energy efficiency in buildings, the World Business Council for Sustainable Development1 reconfirmed that, worldwide, buildings account for 40% of global energy consumption (and, of course, the associated carbon footprint) – significantly more than all transportation combined.

The study clearly established what many facilities engineers have recognised, and acted upon: that buildings are a place where improvement can be readily made, at lower costs and higher returns than in other sectors. This article will focus on one particular, and important, area – the methods and benefits of lighting control – and will provide a summary of a recent case study of an office building in Manhattan, New York.

The operation of many offices presents a particular environmental challenge due to the demands of the various occupiers, as well as the expectations of the building owner, which sometimes differs to that of the occupier. However, they also offer great potential for improvement. The chart2 in Figure 1 illustrates annual UK electricity use in office buildings. It clearly shows that lighting plays a significant part in total electrical consumption. Globally, lighting contributes around 20% to office energy use. Lights in offices are often left on when no one is in the room, or kept at maximum level, even when daylight streams through the windows. In all too many buildings, lighting control is restricted to being simply ‘on’ and ‘off’ at the whim of the occupant.

By controlling the whole lighting installation, the annual energy use, as well as the maximum demand drawn from the electricity supply grid, is moderated – particularly where a lighting installation includes predominant daytime use and daylighting opportunities are exploited. Reduced lighting energy consumption can significantly diminish the carbon footprint of the building – each kWh of grid supplied electricity is likely to create about 0.5kg CO2. The local night-time environment can also directly benefit by reducing light pollution from unnecessary lighting.

Figure 25, which is based on data gathered by a system’s manufacturer, indicates that, with the adoption of ‘state of the art’ control for a ‘typical’ office building, lighting energy use may be reduced by 60% at the same time as reducing the building cooling costs by 20%. Maintenance costs can also reduce as lighting operation times are controlled.

In 1959 a physicist named Joel Spira invented the world’s first solid-state light dimmer. In the succeeding half century this technology has evolved into integrated total light management control systems, where, for example, room occupation sensors, linked with daylight sensors and solar shading devices, are employed to automatically adjust the lighting levels according to the type of building use without any human intervention.

By incorporating lighting level sensors together with algorithms that can determine the position of the active shading devices (blinds, louvres and bris soleil), these devices can be adjusted to reduce glare, heat gain and, as a result, trim cooling loads. The systems can provide enhanced user input (for example, using simplified control panels in rooms to enable single point lighting ‘mood’ control) and accessible monitoring so that, at a glance, occupiers can track changes in energy consumption. The marketplace for such systems is currently buoyant, with many systems being interoperable (able to communicate and operate with devices and systems from other suppliers), thereby creating a complicated array of intertwining solutions.

The DALI (Digital Addressable Lighting Interface) has been the technology that initially moved widespread adoption of automated lighting control forward. DALI is a digital communications system that was initially designed to provide lamp dimming and switching control. Each controlled lamp has a DALI dimmable ballast (transformer) with its own individual digital address allowing the lamp to be switched and controlled continuously from full output to a few percent of maximum.

One of the reasons for the wide adoption of DALI is its simplicity of connection; DALI ballasts are connected with two parallel wires (a ‘bus’) in a star or daisy-chain formation that provide the control signal and power to operate the ballast control. Operating at low voltage and within strictly specified limitations6, the system is particularly robust and resistant to interference. Controller devices can now include a wide variety of inputs such as control panels, switches, light sensors, occupancy sensors and from virtual ‘control panels’ on personal computers, PDAs and smartphones. Each controller can send messages directly to a ballast device or to another controller, and ballasts can be addressed individually or as part of a group.

DALI was originally conceived as a standalone system to control lamp ballasts. However, with the improvement of building fabric and the rise in occupant expectations, lighting has become an increasingly significant part of building energy consumption. This has driven the need to incorporate lighting control into the overall building management system and has, in turn, generated a profusion of standards and protocols. Probably the most significant underlying standard is IEEE 1451 – Standard on Sensors and Actuators (implemented in 1997); this is a suite of guidelines each aimed at standardising a different aspect of communications for smart transducers (sensors and actuators)7.

Both wired and wireless protocols build upon and integrate wth IEEE 1451. Some protocols provide gateways or bridges with DALI systems (such as that shown in Figure 3); and some, such as IBECS (integrated building environmental communications system) use their own microcontroller on each sensor and device. IBECS has recently been expanded to allow control of standard DALI ballasts – further blurring the differentiation between systems.

Fig. 3 : A lighting controller taking inputs from a wide range of sensors to drive DALI outputs. The system is linked with the building management system (and other controllers) through standard computer networks

The advent of low-cost wireless systems is challenging the original ‘simplicity’ of the two wire DALI. Wireless technology is particularly pertinent in refurbishment projects where additional data cabling may be seen as either too expensive or simply impractical.

One of the leading contenders for the wireless protocol is the ZigBee; unlike other wireless types, this was developed specifically for remote monitoring and control with very low power requirements. Due to its ‘mesh’ method of transmission it has, potentially, almost unlimited range within a building. Mesh networks enable individual nodes (such as sensors) to communicate with and pass data directly to other nodes, so the data travel in short hops (just a few metres) but ‘meshed’ together, linked by short-range wireless, so the information may pass over long distances.

ZigBee’s fast response times are particularly relevant for lighting control: users expect an ‘instantaneous’ response when a light switch is pressed. But, as would be expected in such a fast-moving marketplace, there are other lowpower wireless systems vying for position.

Integrated building management and control is increasingly being undertaken by systems that use BACNET – ASHRAE’s Data Communication Protocol for Building Automation and Control Networks; or Echelon’s LONworks. These are needed to communicate with manufacturers’ proprietary systems via ‘intelligent’ gateways and provide a framework to control and monitor subsystems (such as DALI) as well as link in the various wired and wireless networks.

The New York Times Company, a global media enterprise, decided to build a new headquarters in Manhattan, New York and, as a client, wanted to take an active role in the project. The company resolved to exercise control at every stage of the project’s design and construction processes, ensuring that the new building accurately represented its corporate culture and values, and reaped real business benefits for the company, which owns 28 floors or about 62,500m2. The interior designer Gensler confirmed that: ‘The number one priority was to allow natural light to make employees feel more comfortable and to produce an energising work environment.’

State-of-the-art lighting control options were implemented to satisfy the requirement for integrated daylight with appropriately dimming electric lights, as well as to provide the flexibility to readily reconfigure spaces for alternative uses. The building design was based around a lighting power density of 13.5 W/m2 usable floor area. Using the DALIbased lighting management system, The New York Times Company’s recorded annual average light power is just under 4W/m2 – a reduction in operating power use over design of about 70%. The annual data for 2008 is shown in Figure 4. 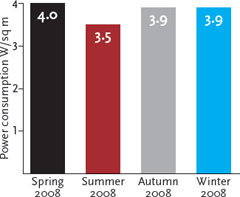 The design goal of 13.5 W/m2 was set to meet the local building code that was in effect when the building was constructed; these regulations have since tightened to 11.6 W/m2, and the operational lighting power use is still less than 35% of this figure. This disparity between installed capacity and the actual power consumption shows that there is a real challenge in modelling and predicting lighting energy use to provide evidence for code compliance when planning an installation. It needs to take account of operational factors such as the integration of daylight and variable occupancy.

The relative benefit of each strategy is shown in Figure 5.

Glenn Hughes, former director of construction for the project, believes that the lighting control system has established an excellent baseline for the building, but that even greater energy savings can be achieved as the system parameters are adjusted and developed by carefully monitoring the building performance.

‘The key is having smart systems, where all your components work in unison to give you the optimal level of light,’ says Spira the inventor of solid-state light dimming. ‘The technology is getting better and faster, which means the savings are getting better and coming faster.’