The Renewable Heat Incentive is a fixed payment for the renewable heat generated and is similar to the Feed-In Tariffs (FITs), a comparable scheme for electricity which went live in April 2010. It has done more than anything else to accelerate the installation of renewable energy capacity in Europe.

While the Renewable Heat Incentive (RHI) is very similar to FITs, there are some important differences due to the fact that nearly every building in the UK generates its own heat from a gas or oil boiler. In other words, there is no national grid for heat, and so importing and exporting heat is irrelevant.

To date the details of the scheme have not been finalised by the UK government, so there is some doubt as to the precise content of the scheme.

Under current proposals – subject to any changes implemented by this autumn’s government spending review – the key elements of the RHI include the following:

Figure 1 indicates the proposed tariff levels within the RHI consultation document. However, these are not final and may be moved up or down. 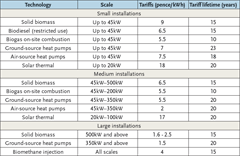 Heat pumps have already proved their worth as energy efficient cooling and heating systems for today’s buildings. With the latest development of ‘heating-only’ heat pumps designed to take the place of the heating-only gas boiler, or the biomass/ biogas system, there is now an alternative renewable technology to be considered. For the forseeable future it seems likely that all the renewable technologies will have specific applications that benefit most from the particular technology.

Fig. 3 : The biomass cycle and system

For example, biomass may be best for projects that require large amounts of hot water, such as hospitals. In the size range 50 to 200kW heating capacity, heating-only heat pumps offer ease of design and installation, ease of operation and maintenance, and flexibility in heat source (ground or air). In a comparison between heat pumps and gasfired boilers, the most efficient gas boiler provides 93 units of heat for 100 units of gas input, while a heat pump operating at a COP (see below) of 3.5 can produce the same 93 units of heat from 53 units of gas input.

The principles of operation of a heat pump have been well documented in previous CPD articles, the most recent being the February 2010 issue, ‘Design of air-source heat pumps for heating and hot Water’. The performance of a heat pump is defined by its COP (coefficient of performance), which is the ratio between useful heat output and the total energy input (normally electrical energy) to drive the system. A typical seasonal value of COP for an air-source heat pump providing hot water at 40oC in an ambient of 0oC would be 3.5 to 4.0. A typical value for a ground source heat pump would be 4.5 to 5.0. This means that, for every kW of electrical energy to drive the heat pump, 3.5 to 5.0kW of heat is generated (ie, an overall ‘point of use’ efficiency of 350% to 500%).

In order to maximise COP it is necessary to minimise the temperature difference between the heat source and the heating requirement. CIBSE Guide F: Energy Efficiency in Buildings, states that for every 1oC increase in this temperature difference the heat pump requires 3% more energy to drive it. Design and specification for a heat pump system is therefore vital, as is commissioning and maintenance of the installed system.

In his book, Sustainable Energy – Without the Hot Air, Professor David MacKay maintains that heat pumps are superior in efficiency to condensing boilers, even if the heat pumps are powered by electricity from a power station burning natural gas. In the CIBSE Journal August 2010, Huw Blackwell of Hoare Lea compares the performance of heat pumps with combined heat and power, and drawing out some of the practical points about heat pumps that can adversely affect their efficiency, such as the need for defrosting the outside heat source coil when the ambient drops below about 5oC. A further article in the same Journal issue, ‘Gaining Ground, Heat Pumps 2 Specification’, acknowledges the growth that has taken place in the heat pump market and again emphasises the need for good design at the building stage before selecting the appropriate heating technologies.

If we take a fairly typical office building of about 2,800m2 and a design heat load 200kW, to meet the heating demand, the following systems can be considered:

The heat pump system is shown in Figure 2 and the biomass cycle in Figure 3. Biomass is a biological material such as wood, waste or biogas and is a renewable energy source. A biomass boiler is regarded as a zero carbon technology and the cycle between production and absorption of CO2 is short in comparison with other fuels.

In this example, the costs for the biomass system are based on the Biomass Heating Guide CTG012 produced by the Carbon Trust. The tariffs and emissions factors in Figure 4 are based on information in the SAP 2009 version 9.90(March 2010) document. Figures 5 to 8 speak for themselves with regard to comparative costs, efficiency and emissions.

Note that the water flow temperatures achievable for the three options are:

There are several issues that need to be addressed when using biomass boilers. In urban and inner city areas delivery and storage of the fuel is a problem, even prohibiting its application in some cases. There can also be a problem in rural areas where delivery involves long transport distances for the fuel, resulting in an overall increase in CO2 emissions for the application.

Maintenance and testing of a biomass boiler and associated equipment is generally greater in time and cost than heat pumps or gas boilers. Should biomass installations increase significantly in the future, there may come a point where the UK cannot meet the fuel demand and the fuel has to be imported. This again would increase the CO2 emissions.

From the example used, while the heat pump solution has many points in its favour, it is important to emphasise the need to consider all options for each building application. It would seem that the future will include heating solutions that make use of each of the renewable technologies. The following points should be considered: