Air will be present in piped water systems both as a result of incomplete purging after the system is filled but also due to the release of dissolved air. The amount of air dissolved in the water depend on the temperature and pressure that may be determined and explained using Henry’s Law. Henry’s Law is that at a particular temperature the amount of gas that will dissolve in a liquid is proportional to the partial pressure of that gas over the liquid – the potential solubility of air in water is shown in Figure 1. 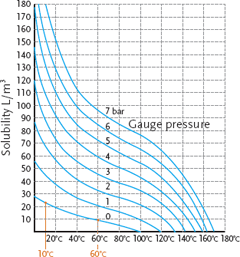 Fig. 1 : The solubility of air in water

For example, a heating system open to atmospheric pressure (ie 0 bar gauge) that is initially full of water at 10°C potentially has about 22 litres air dissolved for every cubic metre of water (22 L/m3). When the low temperature system is heated to 60°C the volume of dissolved air falls to about 10 L/m3 – this released air (12 L/m3) circulates around the system to create the air pockets at high points such as tops of radiators.

Similarly, considering the effect of pressure, for example at a system temperature of 60°C, for every reduction of 1 bar pressure (equivalent to a pipe rise of 10 metres in a building) there is potentially about 11 L air released for every cubic metre of water.

Air will be typically present in piped water systems as a result of the inadequacies of bleeding the system after filling (for example, radiators have a 15mm air pocket that cannot be manually bled out). In addition, no matter at what pressure the system is operating, air will leak into the system through ‘microleaks’, seals, glands and by diffusion through the pipe walls.

Air will increase system noise and pressure drops, and so increase pumping costs or reduce the pump capacity. Components will be damaged such as the ‘pitting corrosion’ of pump impellors from microbubbles (bubbles just a few microns in diameter) and drawing of valve seats.

Following a correct design process, and using a combination of manual and automatic air vents (AAVs), the bulk of air can be removed from a piped water system. However, when water is being pumped around the system microbubbles cannot be readily removed by AAVs, as the momentum of the water/air passing under the AAV connecting tee does not allow the air to rise into the air vent. When the circuit is not operating air can gravitate in the still water to the top of the system – this is why AAVs are normally located at the top of risers.

Air separators are normally cheap and rely on relatively low centrifugal forces. They can separate out the larger air bubbles circulating around the system, but will not be able to remove microbubbles because the environment in the vessel remains turbulent, not still. 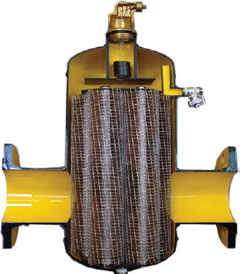 As air (particularly microbubbles) cannot be efficiently removed in a turbulent zone, specific low velocity regimes are needed so that the bubbles can be eliminated by buoyancy forces (outside the main water flow). Hence the development of the deaerator as in Figure 2. Deaerators need either to be tall to create this ‘still’ water environment, or of an increased bore, to create a laminar flow area outside the turbulent waterflow, and thus allow the air to rise naturally and be vented from the system.

The simplest (and most common) deaerators, known as a temperature differential deaerator, should be installed close to the point where the bubbles are formed – the system’s hottest point (in a heating system this would be the flow header). As the water cools it will absorb air (for example, air trapped in the top of a radiator) that then returns back to the boiler, in solution. The absorbed air is then released as the boiler reheats the water and then the following deaerator removes a proportion of the released air until, eventually, all the air pockets have been automatically removed by the deaeration process. The water is deaerated to an extremely deep level to the extent that at no point in the circulating system can air be released. The absence of air means oxygen corrosion is so minimised that it almost does not exist.

The deaerator should always be installed at the hottest point in the system (on a boiler flow or a chiller return; chilled beams or ceilings require further consideration to locate the hottest point.) For the deaerator to operate properly it must also be located where the static pressure is lower – preferably on the suction side of pumps.

Temperature differential deaeration requires no input from operatives (except for the initial manual venting procedure), and is fully automatic. 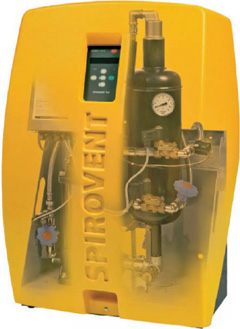 Dirt (such as sand, swarf from pipe cutting, plastic, welding slag etc) will enter a piped water system while it is being fabricated. Systems should thus be properly flushed prior to use. However, inefficient flushing will leave some of this debris in the pipes and, once in operation, scale and particles from corrosion will also accumulate.

A common way of reducing particles in piped water systems is to incorporate a filter or a strainer. There is always a compromise when using strainers – large mesh sizes allow larger particles to pass through, while a finer mesh will collect a large volume of particles rapidly, potentially leading to obstruction of the waterway. To prevent problems, and ensure that system performance does not suffer, strainers are provided with apertures that allow all the by-products of corrosion to pass through or they would block up. Specialised dirt separators (as shown in Figure 4 ) remove particles down to 0.5μm (compared to strainers that typically only remove down to 1,600μm). 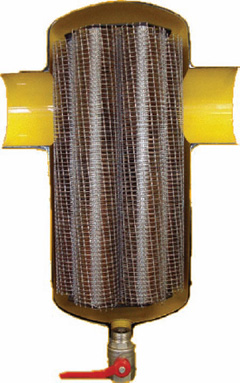 Manufacturer tests have shown that, during the normal commissioning period, the separator will remove approximately 90% of all circulating material, which can then be ‘blown down’ through the valve at the base of the separator.

In operation a dirt separator would normally be blown down at building handover and quarterly thereafter. Maintenance is typically then no more than five minutes in a year.

Dirt separators can remove any dirt particle, not just magnetic dirt, provided that the particle is heavier than water. As with the deaerator, dirt separators require a still water zone to remove all dirt particles that are heavier than water. Fitting dirt separators into existing systems has reportedly shown impressive reductions in solid matter. One particular independent test saw the dirt content reduced from 620 g/m3 (sized 5 to 10μm) to less than 1 g/m3 of all particulates larger than 0.45μm following the installation of a dirt separator, over a seven-week period.

A combined deaerator and dirt separator (shown in Figure 5) reduces the cost and space requirements compared to separate devices. 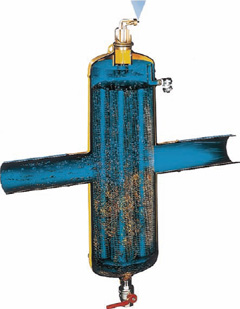 By achieving an air and dirt-free system components will have an extended life and increased performance. By applying modern deaerator and dirt separator technology this can be achieved to a higher level without the need to clean strainers and without onerous maintenance requirements. Temperature differential deaerators need little or almost no maintenance, and dirt separators typically require blowing down for the first two to three months – then just a quarterly blow down lasting around 5-10 seconds. Thereafter, pressure differential deaerators require annual maintenance and solenoid valve diaphragm replacement. Hence wear on equipment will be reduced, and maintenance costs on heat exchangers, pump seal replacement and radiators will be lower, with consequent improvements in effectiveness and reduced operating costs.

Case study one: example of reduced maintenance through dirt and air removal – Holland 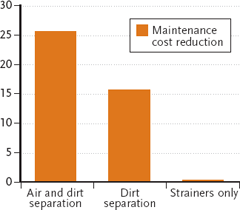 Fig. 6 : Case study one – impact of deaerators and dirt separators on maintenance costs

The cost of maintenance in the three buildings was recorded and the normalised values are shown in Figure 6. The system with the combined dirt and air separator required far less maintenance to ensure effective operation of the systems by reducing the dissolved air as well reducing the amount of ‘dirt’ in the system by 27 per cent compared to the previous year. By comparison, the system that used dirt separators reduced maintenance by 17 per cent.

An existing heating system was designed to supply 103m3/hour (28.6 L/s). However when in operation large fluctuations in flowrate were observed, although the pump was maintained at constant speed. The system was monitored both before and after the fitting of a deaeration system. The effect of the deaeration may be clearly seen on the outline pump/system curves shown in Figure 7. Deaerating the system effectively reduced the system resistance so moving the operating point from one to two, employing a smaller impellor and reduced pump head. This reduced the power input to the pump by 31% compared to the original system without a deaerator. 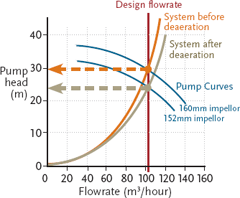