Photovoltaics (PV) are solar cell systems that convert sunlight directly into electricity. PV modules consist of semiconducting material that absorbs sunlight in a way that frees electrons from atoms. Electricity is produced as the electrons fl ow through the semiconducting material. The term photovoltaic describes the operating mode of a photodiode in which electrical current through the device is entirely due to the transduced light energy. Figure 1 illustrates the basic operating concept. Virtually all photovoltaic devices are some type of photodiode. The three most common cell types used (all based on silicon) are:

Other materials are used and others being developed, For example, copper indium diselenide (CIS) and copper indium gallium diselenide (CIGS) are being tested. Other alternatives to silicon are being investigated, including thin-film cadmium-telluride/ cadmium-sulphide, which uses even less material than amorphous silicon cells, but absorbs almost all sunlight.

A single monocrystalline PV cell (100cm2) produces about 0.5 volts at up to 3 amps, that is, a peak power of 1.5Wp (Wp signifi es peak power output). Typically, 36 or 72 cells, but more recently also 50 or 60 cells, are connected in series to form a ‘module’, which produces a higher, more useful voltage. Cells are encapsulated between a transparent front cover and a backing sheet for protection and hermetically sealed.

Figure 2 shows a typical module construction. Conventional crystalline or polycrystalline silicon cells are produced in a step batch process involving wafers of silicon semiconductor material. It is expensive, because of the high cost of wafers and the lengthy production stages. The cell thickness of amorphous silicon (a-Si) alloy thin-film alloy cells is 100 times less than that of crystalline cells and can be formed using low temperature vapour-deposition. So a-Si is cheaper and the panels, more frequently rolls of photovoltaic strips, are relatively flexible. 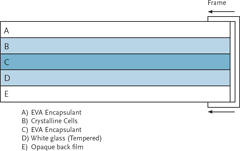 In order to compare the performance of modules, standard test conditions (STC): 10,00W/m2 irradiance at air mass 1.5 and cell temperature of 25ºC are used. The results are presented as a current/voltage (I-V) curve, shown in Figure 3. Typical modules have a Voc of about 20V and an Isc of 5A at STC, with a maximum power point of 16 – 18V. 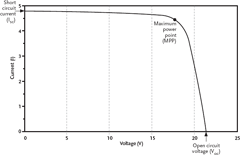 Figure 4 shows relative efficiencies for the various materials and types of PV cell and also indicates the surface area of module required per kW of power produced.

The power output of a PV system can be increased by connecting modules together to form an ‘array’. The number of modules connected in series (a series string) determines the system voltage and the current generated depends on the number of series strings connected in parallel. The PV array produces DC electricity which is converted to AC using an inverter, before it is used in parallel with the mains or exported to the grid. There will be a small drop in system efficiency as a result of the conversion from DC to AC. In remote areas, or if grid electricity were not available, the energy-storage system would be a bank of batteries charged by the photovoltaic cells during the day.

Protection devices are also needed for the DC side. The necessary devices will depend on the system but could include:

Photovoltaic production has been doubling every two years, increasing by an average of 48% each year since 2002, making it the world’s fastest-growing energy technology. At the end of 2008, the cumulative global PV installations reached 15,200 MW. Roughly 90 per cent of this generating capacity consists of grid-tied electrical systems. Such installations may be ground-mounted (and sometimes integrated with megawatts farming and grazing) or built into the roof or walls of a building, known as Building Integrated Photovoltaics or BIPV for short. Solar PV power stations today have capacities ranging from 10-60 MW, although proposed solar PV power stations will have a capacity of 150 MW or more.

This constitutes the specific part related to building integrated photovoltaic systems, of the set of EN 15316 standards on methods for calculation of system energy requirements and system efficiencies of space heating systems and domestic hot water systems in buildings. This European Standard presents a method for calculation of the electricity production of building integrated photovoltaic systems.

Building-integrated photovoltaics (BIPV) are increasingly incorporated into new domestic and industrial buildings as a principal or ancillary source of electrical power, and are one of the fastest growing segments of the photovoltaic industry. Typically, an array is incorporated into the roof or walls of a building, and roof tiles with integrated PV cells can now be purchased. Arrays can also be retrofitted into existing buildings; in this case they are usually fitted on top of the existing roof structure.

Alternatively, an array can be located separately from the building but connected by cable to supply power for the building. Figure 5 is an example of photovoltaic installation for a commercial type building. Depending on the PV output and the building demand, electricity will be supplied by the PV system completely, or topped up from the grid, delivered completely by the grid, or supplied to the grid. 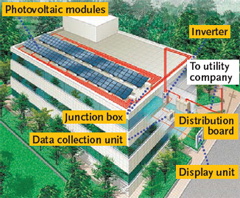 Unlike fossil fuel based technologies, solar power does not lead to any harmful emissions during operation, but the production of the panels leads to some amount of pollution. This is often referred to as the energy input to output ratio, or the energy returned on energy invested (EROEI). If the energy input to produce and maintain the panel is higher than the output it produces, it can be considered environmentally more harmful than beneficial. This should not be confused with the economic return on investment, which varies according to local energy prices, subsidies available and metering techniques.

Another factor to consider is the placement of photovoltaic arrays. If they are located where photosynthesizing plants would normally grow, they simply substitute one potentially renewable resource (biomass) for another. It should be noted, however, that the biomass cycle converts solar radiation energy to chemical energy (with significantly less efficiency than photovoltaic cells alone). The energy payback time is the time required to produce an amount of energy as great as that consumed during production. The energy payback time is determined from a life cycle analysis of energy.

These exercises show that the energy intensity of typical solar photovoltaic technologies is rapidly evolving. In 2000 the energy payback time was estimated as eight to 11 years, but more recent studies suggest that technological progress has reduced this to 1.5 to 3.5 years for crystalline silicon PV systems.

Thin film technologies now have energy pay-back times in the range of 1 to 1.5 years in southern Europe. With lifetimes of such systems of at least 30 years, the EROEI is in the range of 10 to 30. They thus generate enough energy over their lifetimes to reproduce themselves many times depending on what type of material, balance of system and the geographic location of the system.

The development work has resulted in modules that require very low maintenance and are highly reliable with a good level of predictability in its output/performance.