The version of this module in the December edition of CIBSE Journal contained an error in Question 4: item D should read ‘Top quadrant, 0.67’ (instead of ‘Bottom quadrant…’).

We are very sorry for the inconvenience caused.

When considering heat recovery components in HVAC systems they will exchange either sensible heat, or both sensible and latent heat, from typically the discharge room air into the air being introduced from outdoors. An example of a sensible heat recovery process is shown in Figure 1. This is the psychrometric process that would characterise sensible only heat recovery in a plate heat exchanger, a (regenerative) thermal wheel or a run-around coil. The process is similar to that of a basic sensible heating or cooling process – depending on the temperature of the opposing airstream (and this air would be typically the air that is being extracted from the conditioned space). Considering Figure 1, if the temperature of the incoming air, A, is below the dew point temperature, of the extracted air, θX, there may be some condensation in the airstream that is coming from the occupied space so providing increased heat exchange but, in the case of a simple plate heat exchanger, no transfer of water vapour. 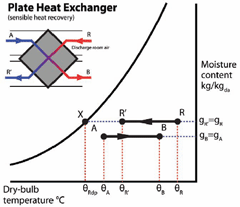 An example of a combined sensible and latent heat exchange (ie including an exchange of water vapour) is shown in Figure 2. This process could be associated with a hydroscopic thermal wheel.

Referring to Figure 2, the practical effectiveness, ε, of the heat-recovery devices may be described in a number of ways. In terms of sensible heat exchange εS = ṁA(θB – θA)/ ṁR(θR – θA), and for latent heat exchange, εL = ṁA(gB – gA)/ ṁR (gR – gA), where the values of εS and εL are not necessarily equal for a device that has both sensible and latent heat exchange.

In terms of total heat exchange the enthalpies of the air streams may be used to give εT = ṁA(hB – hA)/ ṁR(hR – hA). 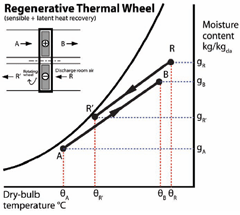 Theoretically the use of absorbent or chemical dehumidification to remove water vapour from an airstream is simply the reverse of the adiabatic humidification process and is shown in Figure 3. In HVAC this would typically be undertaken by a slowly rotating (1 to 10 revolutions per minute) framework with a matrix packing coated with absorbent on a wheel. The actual performance will be determined by the effectiveness of the regeneration of the absorbent – the heating process that removes the moisture from the absorbent so that it can then be reused to absorb water vapour from the incoming air. 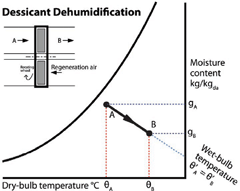 The use of sprays and sprayed coils in comfort air conditioning has lost favour for many due to concerns for the need for onerous maintenance requirements to maintain effective and healthy operation. However, when there is a guaranteed appropriate operation and maintenance routine, these types of humidification devices are still employed – particularly in industrial and legacy systems. Adiabatic humidification (as would be typical of an ultrasonic humidifier) was discussed in the article in October. If, however, the water is heated or cooled as it is sprayed into the air stream it will produce the processes as shown in Figure 4. If the spray water is made warmer than that shown in the figure, humidification may occur isothermally (similar to the process for a steam humidifier, a vertical process line), and if the spray is made warmer still, both humidification and heating can be achieved at the same time.

For the cooler water the traditional method of providing low-temperature water was to spray the water onto an active cooling coil. 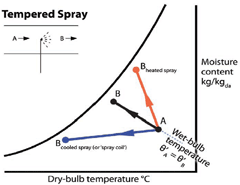 A ‘process’ that appears to be somewhat under-utilised in comfort HVAC is face and bypass. This is not really a single process but a combination (most frequently) of a cooling and dehumidifying process with a mixing process where some of the air passes around the cooling coil and then mixes back in with the air that has been cooled and dehumidified. If applied appropriately, face and bypass can usefully reduce the energy used in ‘reheat’ processes commonly applied to provide close control of supply temperature and humidity.

This process is shown in Figure 5. For a bypassed cooling coil the position of the mixed point M will be determined by the proportions of the air that has passed through the coil, B, to the air that has simply bypassed the coil A. 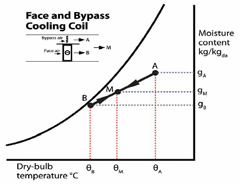 Figure 5 : Face and Bypass of a Cooling Coil

The conditioned space is itself represented as a process on the psychrometric chart and has a dedicated section on the standard CIBSE Psychrometric Chart to assist in determining the gradient of the ‘room ratio line’, RRL. The value of this sensible/total heat ratio is determined from

where the loads (normally in watts) have been previously obtained from a load calculation undertaken by hand (eg the CIBSE Admittance Method) or by using computer modelling software. It is important that these loads are truly room loads – these are sometimes confused with central plant loads that include the fresh air load that, if supplied from a central plant, is not a room load. (This confusion commonly arises from a misunderstanding of the output of computer generated load calculations).

The slope of the RRL may then be determined from the ‘protractor’ printed on the chart and shown in Figure 6. In comfort air conditioning, the line will be in the upper quadrant of the protractor when there is a room heating load, and in the lower quadrant when there is a room cooling load. The room ratio line is used to indicate a set of possible room conditions when the supply air condition is known, or conversely a set of suitable supply air conditions when the design room condition has been plotted. The actual length of the line is determined by the actual room load and the supply air mass flow rate – this will be fully applied in a subsequent article.

There is often uncertainty as to how filters and fans in an air handling system are represented on a psychrometric chart. Practically a filter would not affect the heat content in the air – it would of course have a pressure drop across it and so consume air power. So the filter is not normally included in a psychrometric plot. The fan will sensibly heat the air by about 0.1K for each 100Pa of total fan pressure (WP Jones, 2001, Air Conditioning Engineering, 5th Edition) and so can be shown on a psychrometric chart as a simple, sensible heating process.

All the psychrometric processes that have been described in this short series of articles may be combined to determine the component requirements for an air conditioning system, to determine its control strategy and to predict its operation. By linking in data reflecting historic outdoor air conditions the psychrometric analysis can predict comparative energy consumptions for different systems. A future article will develop these combined systems. 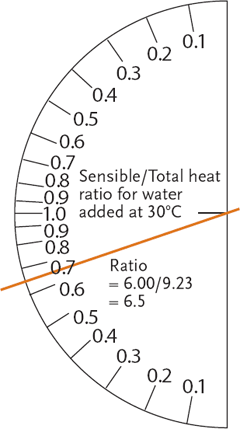 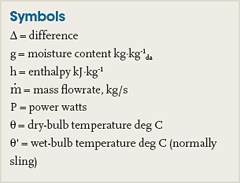