Demand controlled ventilation (DCV) is a strategy that attempts to reduce the energy used by ventilation systems while maintaining required levels of indoor air quality (IAQ). Since many buildings will regularly operate at occupancies below the design maximum, the requirement to provide ventilation will also be frequently less than the peak design value. Modern implementations of DCV have overcome earlier problems that arose from inappropriate control and excessively high design system pressure drops. The resulting installations can show significant energy savings resulting most significantly from reduced fan power and reductions in the heating of fresh air. Digital control has enabled systems that, as well as being energy efficient, maintain low noise levels through the use of both intelligent sensors and purpose made air volume control dampers (see picture, right). This article will particularly consider the need for DCV and the sensors that are used to feedback some measure of air quality. 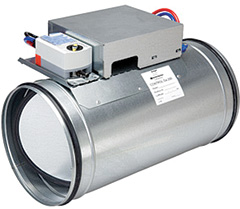 Historically, buildings relied on manual regulation to ensure adequate ventilation. In its most basic form, this would be by the occupant sensing a shift from conditions of comfort (predominantly characterised by people as ‘temperature’ or ‘humidity’) and opening, or closing a window. So, for example, the Victorian and Edwardian classrooms (picture, right) cited by Terry Wyatt at the recent CIBSE conference, relied on the teacher making a subjective decision that there was a need for additional ventilation and then opening a window. Similarly, basic mechanical ventilation systems are controlled by occupants simply switching them as circumstances demand. However, automation allows the monitoring of a condition and the variation of ventilation strategy to satisfy some preset condition that attempts to emulate the human controller whilst, in many cases, minimising the use of energy.

Temperature and humidity are the principal measured and controlled variables in HVAC for traditional systems based on a constant volume flowrate, with a combination of cooling and (re)heating to meet design conditions. With the convergence of the 1970s energy crisis and improved control technology variable air volume (VAV) systems that were conceived to alter the volume flowrate to match thermal demand became popular. By regulating the flowrate of air through a properly designed system, (as well as eliminating reheating) significant energy savings could be achieved[3]. The concept has been developed and refined to produce the modern DCV systems that frequently not only control temperature (and humidity) but also optimise the supply of air volumes, and particularly outdoor air, so that appropriate levels of IAQ are maintained whilst minimising energy costs.

The continued drive to save energy, together with novel construction techniques and materials in the litigious 1980s and ‘90s, focused building users and operators on IAQ as ‘Sick Building Syndrome’ became a household term. The ‘contaminants’ that actually affect building IAQ are various and numerous.

Both particulate and gaseous matter are likely to be present in the cocktail that makes up the indoor air. Pollutants can be generated through indoor activities such as cooking (particles, carbon monoxide, nitrogen oxides, NOx) and cleaning (volatile organic compounds, VOCs) while others are emitted from building, furnishing and consumer products such as carpets, adhesives, paints, houseplants and toiletries[4]. Carbon dioxide (CO2), as breathed out by people, is frequently included in the list of contaminants.

However, unless it goes above the recommended 1,000 ppm (compared with outdoor CO2 levels of about 400ppm) it will have a negligible affect on the occupants[5]. And, of course, pollutants generated outdoors from vehicle traffic and combustion will pass into the space through cracks and openings, mechanical systems, doors and windows. These will include PM10 (particles measuring 10μm or less); fine particles, PM2.5 (the size that are manifested as haze in the atmosphere); and the more recently highlighted ultrafine (particles measuring 0.01μm to 0.1μm characteristically associated with diesel engine emissions).

The very mechanism of passing air through poorly cleaned ductwork has itself been shown to significantly add to the perception of odours (as measured by the unit of ‘decipol’) and hence IAQ. 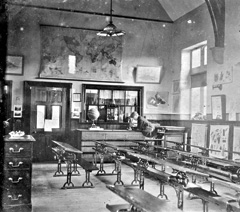 The occupants themselves will contribute to the cocktail by adding their bio-effluents that will include perspiration, chemicals and gases in their breath. Unless infectious, human bio-effluents are not a health hazard, though CO2 can build up in unventilated spaces and cause headaches; moisture can raise humidity levels and cause condensation and corrosion; and odour levels may become unacceptable. Since the early 20th century, the general assumption has been that if there is sufficient ventilation to control human odours, there will be enough ventilation to control the health effects from other contaminants. However, the effect of non-occupant related ‘buildingborne’ contaminants (for example VOCs released from materials such as particle board) in modern buildings challenges that assumption. Recent reviews have shown that far lower levels of VOCs can be sensed by humans than had previously been thought (hence the long lingering perception of odours from materials used in constructing and furnishing buildings). This olfactory affect, exacerbated at low humidity levels, clearly indicates that the overall perception of comfort may be influenced by factors that are occupancy independent and hence have little or no correlation with the number of people present. The combined effect of all the contaminating influences on human comfort (let alone human health) is difficult to clearly identify, although there has been much research in the area.

In buildings where the use is principally characterised by moderate to high occupant densities (eg classrooms, theatres, assembly halls) CO2 is most frequently sensed to predict the magnitude of the occupancy (and by inference, the IAQ). CO2 sensors are commonly based on a technology known as non-dispersive infrared detection (NDIR) where the absorption of the infrared red light by the sampled air in the sensor provides a measure of the CO2 content.

The technology is reasonably mature, having been used for more than 20 years in HVAC applications. However, the sensors are sensitive to temperature and humidity (as well as tobacco smoke, which is now not such a common concern) and have traditionally been very costly, although recently introduced ‘system-on-a-chip’ NDIR have significantly reduced costs. Modern implementations of CO2 sensors use gas permeable membranes to allow the air sample to be analysed whilst keeping larger particulate matter away from the sensor’s optical system.

By integrating microprocessor control, sensors can be recalibrated by automatically resetting to the known outdoor air CO2 levels, frequently (and sometimes erroneously) based on the assumption that the lowest reading of the week is the outdoor concentration. If this assumption is not true, then auto recalibration can drive the sensor into serious error. Almost all manufacturers certify their sensors for five years or more – and one, notably, provides a lifetime guarantee. However several studies reported on by Maripuu[9] have shown that practical implementations of the sensors in the field record significant and unpredictable errors.

Developed from metal oxide semiconductor (MOS) sensors used to sense VOCs the technology has recently been applied to determine CO2 levels. Although the sensitivity to selectively measure CO2 is traditionally low for MOS technology new semiconductor doping materials have improved this and they are appearing in the marketplace. It is still a relatively untested technology for CO2 sensing.

Electrochemical sensors have also been used for CO2 measurement; however, to date their operational effectiveness is uncertain since they are a relatively recent addition to the HVAC marketplace. They are more resistant to dust and moisture than non-dispersive infrared sensors and quicker to stabilise.

MOS sensors are typically used as ‘mixed gas’ sensors. The gases in the sample are absorbed by the sensing element’s surface so changing the resistance of the surface. By varying the semiconductor material or by operating the sensor at different temperatures and temperature profiles, the response of MOS sensors may be adjusted.

However, they provide a measurement only of the presence of a mixture of gases with no feedback of individual concentration, and so commercially they are used as general ‘air quality sensors’. They are relatively cheap to produce but reports indicate that they need frequent replacement as they drift out of calibration and lose sensitivity. They have been successfully applied in a number of applications as a means of detecting occupancy, including in libraries, and were noted as being particularly successful in areas where there are food odours and cigarette smoke. Since the sensor output provides an indication of change, rather than a specific value, these sensors are particularly useful where there is a step change in conditions that would signal a change of use of a space requiring a shift in the ventilation regime – for example, a dedicated smoking area at an airport.

Since the installation cost and maintenance requirements of gas sensors may be prohibitive, multipoint space sensing may be used where one sensor is employed to sample many spaces. This uses a network of inert flexible tubing around the building that draws air samples from the different points (that may include the outdoor air) back to a central monitoring sensor. The number of spaces that can be effectively sensed with one sensor is limited by the time needed to draw air from a space and take a representative reading.

Movement detector technology using passive infra-red or ultrasonic sensors are used to determine the presence of occupants and have been widely applied to lighting controls. This can be usefully utilised for ventilation applications (such a classrooms) where there is a known occupancy, but there is some uncertainty as to the periods of use. On detecting occupation, the ventilation systems may be simply actuated or step changed.

Intelligent movement detection is available using infrared sensors combined with advanced tracking and detection algorithms, to count the occupants as they enter and leave a space. This can provide a direct measurement of occupancy (as opposed to the previous inferred methods) and so, if set up correctly, can provide a reliable signal of occupancy levels to the ventilation control system.

The successful monitoring and control of the quality of room air is becoming increasingly important as the application of novel building techniques and materials coincide with improved awareness of their effects on comfort and health.

There is a prerogative to reduce the building environmental impact, but there is little benefit in ‘saving energy’ if air quality and occupant comfort is affected detrimentally so that productivity drops, leading to increased operational costs and a potential perverse increase in the carbon footprint. The use of properly-controlled DCV systems can provide improved internal environments while saving operational costs.