By way of introduction, centrifugal compressors have been used in refrigeration applications for many years at the large-capacity end of the market, beyond about 500kW cooling capacity. In the air conditioning field the refrigerant R134a is now generally used, although in industrial applications propane and ammonia are often selected. The centrifugal compressor is different in operation to reciprocating, screw, scroll or vane compressors, which are positive displacement machines and achieve the pressure rise by reducing the volume of the gas. In a centrifugal compressor, suction gas enters the eye of the spinning impeller and is thrown by centrifugal force to the periphery of the impellor. The blades of the impeller impart a high velocity to the gas and build up the pressure. From the impeller the gas flows either into diffuser blades or into a volute, where some of the kinetic energy is converted to pressure. The compressor may contain one or more impellers, therefore single or multistage, depending on the pressure ratio required for the application.

Advantages of centrifugal compressors over other types include the following:

Recent features that have been introduced or developed for centrifugal chillers, and which result in energy savings, are:

This is a digitally controlled system consisting of both permanent magnets and electro magnets, which replace the conventional lubricated bearings. Figure 1 shows the main components of the system. The compressor shaft rotates on a levitated magnetic cushion and magnetic bearings (two radial and one axial) hold the shaft in position. Permanent magnetic bearings do the primary work, while digitally controlled electromagnets provide the fine positioning. Four positioning sensors per bearing hold the levitated assembly within a tolerance of 0.0005 mm, so that when the shaft moves from the centre point the electromagnet’s intensity is adjusted to correct the position, six million times per minute. When the compressor is shut down the shaft rests on graphite lined, radially located bearings. The compressor uses capacitors to smooth ripples in the DC link to the motor drive and, in the event of a power failure, the motor becomes a generator, using its momentum to produce electricity, keeping the capacitors charged for the brief “stopping” period and providing enough power to maintain the shaft’s levitation. The use of magnetic bearings also incurs more than 500 times fewer frictional losses than conventional bearings. This results in a reduction in the starting current to just 2A, removing the transient starting spikes frequently associated with screw and reciprocating compressors and the need for expensive soft start arrangements, as well as eliminating the risk of penalty charges for exceeding maximum power demands.

Until the development of the magnetic shaft bearing, all compressors required oil lubrication by varying degree, which meant the oil mixing with the refrigerant as it was compressed. In this scenario, some oil leaves the compressor and enters the refrigerant system. Highly efficient oil separating vessels can be fitted to the compressor discharge and return the oil to the compressor, but a small amount of oil will still enter the system and travel in or with the refrigerant, through the condenser and into the evaporator. Many air conditioning packaged chillers with D-X evaporators have no oil separator and rely on refrigerant velocity to carry oil back to the compressor. Oil adversely affects the heat transfer rate and pressure drop, particularly in the evaporator, so cooling capacity and efficiency is reduced. Magnetic bearings eliminate the need for oil lubrication and with it the need for oil pumps, sumps, heaters, coolers and oil separators, plus the associated maintenance requirements. Figure 2 shows the components of the latest centrifugal compressor. 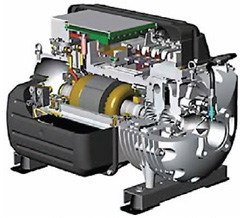 An important aspect of the control philosophy for the chiller is that the system is designed to operate with a floating head pressure, providing opportunities for savings not available to conventional designs, where head or condenser pressure is maintained at or near design condition to provide system and expansion valve stability during variable load periods. Floating head pressure allows the condensing pressure to fall during low ambient conditions, which increases the efficiency of the chiller. Matching the components of the chiller is important to maximise the potential of this new compressor. Integration of the controls and managing the floating head pressures is vital to optimise chiller performance, particularly when managing the liquid pressure amplification for free cooling (see later).

A flooded shell and tube evaporator has the refrigerant in the shell covering the tubes through which the chilled water flows. It is a more efficient heat exchanger than the D-X type, but refrigerant level has to be controlled, often by critical refrigerant charge. Centrifugal chillers have always used flooded evaporators, but oil management was always a disadvantage. Oil-free centrifugal compressors eliminate this problem and result in further increased efficiency. Features of the flooded evaporator incorporated into these chillers include:

The centrifugal, oil-free compressor incorporates an inverter-driven, permanent magnet, brushless motor. Typically, traditional induction motors of this size are in the 92% efficiency range, but the new compressor’s permanent magnet DC motor provides an efficiency of between 96 and 97%. The variable speed drive provides a speed range from 18,000 to 48,000 rpm.

The micro-channel, parallel flow, air-cooled condenser coils are designed to increase performance by up to 45%, making it possible to significantly reduce condenser dimensions for a given capacity. Constructed entirely of aluminium, the coils’ weight is also reduced by as much as 45% while the manufacturing method reduces the potential for refrigerant leakage, which makes it easier for end-users to comply with the F-Gas regulation. Other benefits of micro-channel condenser coils include a reduction in coil depth, which lowers air pressure drop, reducing fan power required to create the design air flow rate. The smaller coils also result in a 30% reduction in the refrigerant volume and a reduction in refrigerant pressure drop across the coil of 65%, enhancing energy efficiency still further. The condenser fans feature low noise sickle blades that are arranged so that, when the compressor cycles off, they have the ability to reverse and blow out dust that has gathered on the coil surfaces. This feature helps to maintain coil efficiency and overall energy consumption. 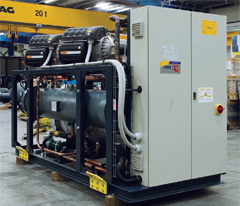 Figure 4 shows the principle of a liquid pressure amplification system, which can circulate liquid refrigerant from the condenser to the evaporator at low ambient temperatures, without running the compressor. For example, if the ambient is 10ºC db, the air cooled condenser may cool refrigerant to 12/14ºC, which could meet the cooling requirement. This has been incorporated into the new centrifugal chillers, where a 1kW liquid pump increases cooling capacity at all condensing temperatures, but has greatest effect at lower temperatures. This glycol-free alternative to conventional free-cooling is highly efficient, and dramatically reduces energy consumption while maintaining refrigeration performance. A secondary benefit of the reduced compressor run-time is extended plant life. With the low-power liquid pump taking the load, the compressor does not have to work so hard or for so long, reducing wear and the likelihood of breakdown.

A recent project has been the replacement of chillers and cooling towers at the Dorchester Hotel in London. The original R22 chillers were in the basement with a condensing water riser to the cooling towers on the roof. They were removed in stages as they were replaced by three of the new centrifugal chillers on the roof, each with a cooling capacity of 1MW and each containing three compressors.

Even though cooling towers generally deliver more efficient operation than air-cooled condensers, such is the efficiency of the new chillers that energy costs have been reduced by £10,000 a month compared with the previous system. These savings are expected to achieve a payback in the first year on the additional capital cost, compared with a conventional screw chiller. There are also savings in water treatment and chemical costs associated with the cooling towers. The analysis of the cooling load throughout the year suggests a £90,000-a-year saving compared with a screw compressor chiller – a 30% saving. Two chillers were positioned on the roof of the 10th floor in space previously occupied by cooling towers, and the condensing water riser was converted to carry chilled water. The third chiller was placed on the roof of the third rear floor, freeing up the basement plant room. There were strict planning conditions regarding noise, and it is intriguing that the new chillers are quieter than the previous cooling towers.

It is claimed that this new breed of centrifugal chillers is “probably the most efficient HFCbased chiller in the world”, able to achieve energy efficiency ratios of 10 and above. The technology can reduce end users’ power bills by between 30 and 50%, while at the same time dramatically cutting carbon emissions. On some applications, the saving can cut pay-back time to less than a year. The performance claims have been independently verified by a leading consultant at a test facility in Italy. As a result of its innovative design, the machine requires 30% less refrigerant than comparable conventional chillers, reducing servicing costs and potential environmental damage from large-scale leakage.